The magic of some applications ends at the moment you need to inspect, patch or improve it. This shouldn’t be this way, and there is a a way to improve this point.

After the first episode, this is our second one: documentation on all fronts.

Months after Devtopia fall, the rebels struggles to survive successive attack waves and took refuge in woods while waiting communication from other groups. Intel exchange are rarely made because they didn’t have a reliable communication channel. Then one day…

– Commander, we have some news from North Rebels: they have successfully developed another weapon that finally will leverage our force against empire and allow us to reconquer capitol city. They are smuggling into our HQ right now.
– Finally good news!
– There is only one caveat sir, some assembly is required… 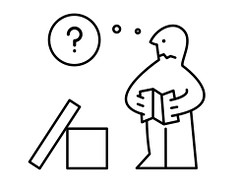 Down to the basics 101: a programming language is called language because it has the same nature of a spoken language: a syntax and semantics to build sentences. Also each language have its own grammar rules and you have to employ them properly to have coherence and cohesion. Yes, we are still talking about code. 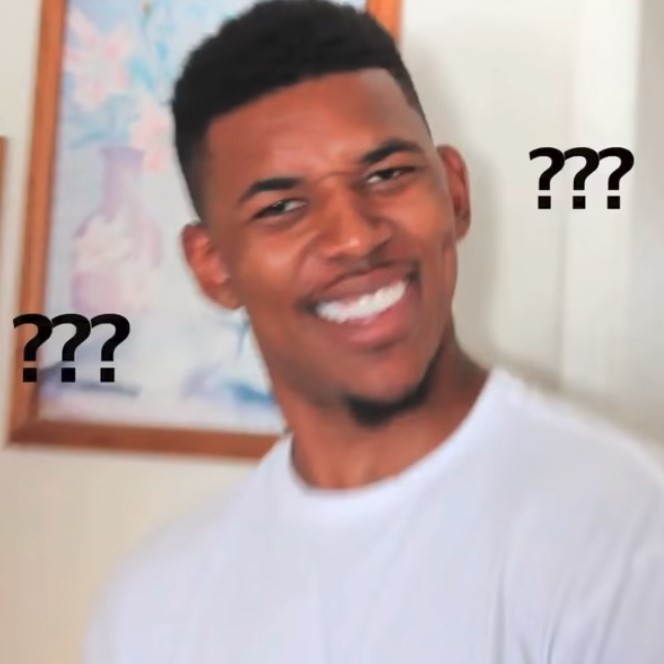 ABAP Language ensures that a variable always starts its lifecycle with initial value, so it doesn’t make sense to clear it right after declaring it. Also why clear it before exiting method? That doesn’t make sense at all in this context, but unfortunately it’s not very uncommon to see both cases.
This could make some sense with global variables and/or class attributes, but this show that bad refactoring, lazy cut/paste make or even lack of knowledge turns codes uglier.

Languages changes, evolves and adapts, so do programming languages. Tables with header lines could make sense a long time ago when technology allowed only 72 characters per line and it wasn’t possible to span a single statement across multiple lines, but nowadays this (obsolete for a few decades) feature create more headaches than solve problems. We don’t write Old neither Middle English nowadays, your code shouldn’t be using obsolete elements either.

No, we’re not going off-topic, because…

Let’s face the truth: your first action to understand what a piece of code does is read it. This by itself is a good reason to write it properly, and you can learn more about it by by reading the official style guide. What it proposes is what non-ABAPers already do in their codes (since a long time ago), now we have la pièce de résistance officiele et publique to finally write readable code in peace.

We are already limited by 30 characters, throwing hungarian notation away frees up 3 of them (if you still don’t know how to quickly discover how a variable was declared, time to study again your code editor). Using the name of tables, structures or even data element into naming is also a problem, it doesn’t add anything useful to it.

Who are the partners in lt_partner? Sold-tos, employees, contacts? Is lt_partner2 a subset of lt_partner1 or is a entirely different set of partners? Business Partner can be a lot of functions on system, it’s impossible to decode that variable name until you investigate how that internal tables are filled.

A readable code is good for your future self, good for your teammates that won’t call you on your vacations to ask something about something you wrote and nobody else understands, and is foremost a good business card of a reusable code. We, as humans, tend to only trust on things after we have some level of understanding about it. Reading a code that have a high WTFs/minute ratio makes you think twice about using it on your development, because you look at it and think “no way this is bug-free, I’d rather write it myself”. 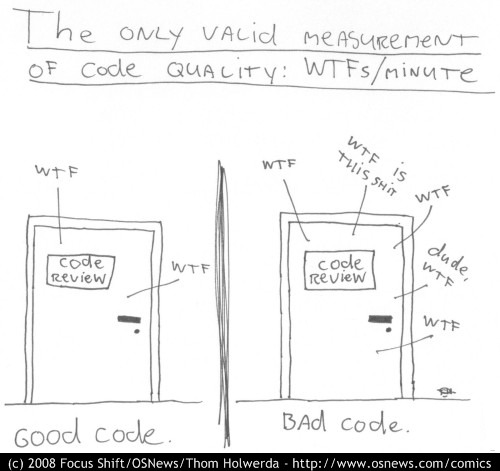 Code quality also diverges to another topic in reusability: you found something that you can almost reuse, but you need to improve it a little bit to meet your needs. A second look on inner code and you found it was so bad that is impossible to adapt it on remaining time to fulfill the work item. A functional clone is born and that is why sometimes you can find two or more function modules that does the same thing on same system.

For complex things, refactor it to be more readable

Write it, cut it, paste it save it.
Load it, check it… Quick, rewrite it.

A thing that haunt us every other month when doing some maintenance on legacy reports: a piece of code that does a selection, fill a structure, build field catalog, then queries another table, pull forecast info from internet, and do rome random calculation about it… all that stuff occupies about 300 lines of code inside a double-nested loop from a form named SELECTION; the program itself have just another form called DISPLAY, and that’s it about encapsulation (all variables are global, by the way).

This is the worst case scenario, but even on new come somethimes you go by emotion (because you know, doing magic is addictive) and write big chunks of code. Refactoring them into smaller units makes easy do digest, and you can even give “functional” methods names to make code readable at high level, even eliminating unneeded comments.

The process of refactoring also have a byproduct: eventually you will see that a class was doing two different things and you decide to split it in two classes. These two smaller classes now executes a specific thing, and specific things are way easier to reuse than cluttered things.

We have ABAP Doc and good ol’ DOCU object, but there is a limit to what can be explained by that tools. Maybe you need to attach an image or a relative large code snippet to explain something, or your reusable thing is made from multiple parts that its documentation would be scattered along multiple objects if done on code.

Remember that everyone can mount a jigsaw puzzle, but is way easier to do it when you know how it should look like when properly mounted. There is no point in creating a reusable thing if no one but you understand. They can use it the wrong way and create problems, or even ignore your solution because it looked too much difficult to reuse it and recreate the feature again (and again, and again…).

Demonstration programs are also a good way to document things

Don’t hold back, ’cause you woke up in the morning
With initiative to move, so why make it harder?
Don’t hold back, if you think about it
So many people do, be cool man, look smarter.

Developers loves examples: the shortest path to understand something, seeing it in live-action, the possibility to debug it outside the business code. ALV demos are the most debugged reports in any SAP system, not because of bugs but to understand how they do something. Write and pack them into same package of what you are demonstrating, so they can be easily located.

Have a multi-purpose reusable thing? Don’t be shy and write multiple reports. Don’t forget the main point of them: make it easy to others understand your tool, and not only showcase all available features.

This game would be so much fun when launched if a demo mode/tutorial taught us that.

Easier said than done… but totally worth it

Lack of time is always the one blamed and used as excuse to write bad code. But probably we had short time to write it because we didn’t had, or found, or understand a reusable object to speed up our development.This is a vicious circle that keeps going ad infinitum if no one takes the first step to break it. Yes, we all know other factors that makes our time short, sometimes even less than 50% of initial time but at least we can make our real time more productive and thus doing “better things” rather than “just good enough”.

Stay tuned for more instructions to win this war. Next episode is about interfaces and events as ways to have a stable code with switchable features.

Work less, and get more done.  I like it.  And it can't be said enough.  Sadly - or not - we have to write technical specs, BUT very few people look at them.  It should all be in the code.  Why?  Because give me a month and I'll forget what I did to make the program work.

A great, much needed reminder.   Not just to comment more but to write re-usable code.

Next time you need it, you can whip something up very quickly.  Bonus!  Even more of a bonus, you get to work on the fun things!  And not the same thing over again.

I loved the blog and the pictures!

I have mixed feelings about technical specs: I agree that they should exists (as a spec) only in design/development phases, and evolve it into technical documentation (or merged into documentation) at later steps of development as a pre-requisite to relase and transport to production. (Evolving here is to cut out all minor details and keep only the essentials to do maintenance or reusability purposes)

The few that look at them are also the only ones that updates them, so is almost sure that a gap between code and spec exists. This is another point to solve and needs understanding of entire team: documents exists for a purpose, and it only fulfills that purpose when it is kept up-to-date.

The simplest yet trustworthy metric of all. No additional training required.

Great points Thales... and today after having million of conversations over billions of developments with so many developers...I am finally convinced that it is also about "being penny wise and pound foolish"... they are willing to write bad code for the want of time and then spend 10 times the effort to rework/retest it... but not willing to spend maybe 3times the effort to code it right the first time!!! and this mathematics causes more WTF moments for me !!!

Indeed there are developers with this mindset, but I still believe that most of them do it because of environmental factors.

A simple (and overly exaggerated) case in a project environment: a developer estimated to implement a feature A with 16 hours of development (coding right the first time and documenting it to the future). After 10 hours of working, the person who wrote the requirement / functional spec tells you to throw everything away and start from scratch because the requirements changed.

Where is the correct timeslot that this wasted time should be computed? Not on developer one, wasn't his fault. Even if him explains to Project Manager, we all know where this time will be subtracted. Now he has only 5 hours to do what was measured to be done in 16: 10 of wasted effort + 1 hour explaining to PM that will also tell to debit that hour, because he should be working on it instead of complaining. Less time, less chance to deliver the best quality.

There are lot of factors to "being penny wise and pound foolish" be applied, but once you prove how bad it is, fast choices are quickly switched to smart choices.

But what if, in this case the developer asked a lot of questions about the requirement and understood why the solution is being built in the first place and that will reduce the chances of something being scrapped. And as changing requirements do happen more now than before, waterfall is now being replaced with Agile/DevOps... that will further help avoid such situations...

and I like you thought on "but once you prove how bad it is, fast choices are quickly switched to smart choices" !!!