This October, SAP Global Month of Service goes into its 15th round! Are you ready?
Kicking off the celebration early, we are proud to be sharing a selection of 15 inspiring volunteer experiences over the coming weeks leading up to the beginning of October.
SAP Global Month of Service, it is our company’s largest volunteer initiative. In 2018, employees volunteered in more than 900 projects in communities around the world. And it doesn’t stop with Month of Service! Our employees are leading meaningful volunteer events year-round, when and where the need arises.

Lily Petkova has shared this week’s volunteering story to showcase how much impact a group of people dedicated to a common goal can have! For the third year in a row, SAP colleagues in Bulgaria have made it their mission to walk as many kilometers as possible, in order to plant as many trees as possible during SAP’s Global Month of Service – and the outcome is phenomenal!

Imagine that you are in a stadium and your national football team is winning the World Cup. Imagine the joy and excitement from the people around you, as you are feeling happy and proud yourself. How you are part of all these positive emotions, as you support the team with the other fans during the qualifications and the championship itself.
Now imagine that you are one of the football players that wins the World Cup. It is an even greater joy, happiness and feeling of fulfillment from your job. You are part of the whole achievement and you contribute to the happiness of all those people in the crowd cheering for your team.

Sometimes participating in social causes can be just as rewarding as those described feelings. In the last years, during Month of Service in Bulgaria, we encouraged the colleagues to volunteer in teams and work together for the community.

Unity creates Strength
Volunteering in teams gives colleagues the opportunity to create greater impact in just one day. Painting benches, cleaning leaves in the park, building wooden bridges in the mountain, renovating a building or helping old people to prepare for winter – together, one team can achieve a lot.
How impactful can it be, if they focus on one cause, a clear goal and get engaged over months? The outcome is something worth sharing!

The Challenge
Two years ago, SAP encouraged employees to buy fitness trackers to increase their physical activity. Inspired by a global initiative, we decided to run a local activity challenge in Bulgaria. The colleagues needed to walk certain number of kilometers for two months, July and August. The number of kilometers, that is set as a goal, is based on signature nature sights in Bulgaria (for example the coastal line – which has a length of 378km, or the Bulgarian part of Danube). For every colleague who managed to achieve the goal, the company would buy several tree saplings.
The colleagues were really engaged and made a lot of effort to increase their activity every day. They shared that the challenge encouraged them to take the stairs every day or park a bit further from their destination, so they could walk few more steps. They were motivated by the common goal and thus they created new habits.
That is why we decided at the end to count also the contribution of the colleagues that didn’t reach the goal. Everybody contributed with proportional number of tree saplings to be planted. 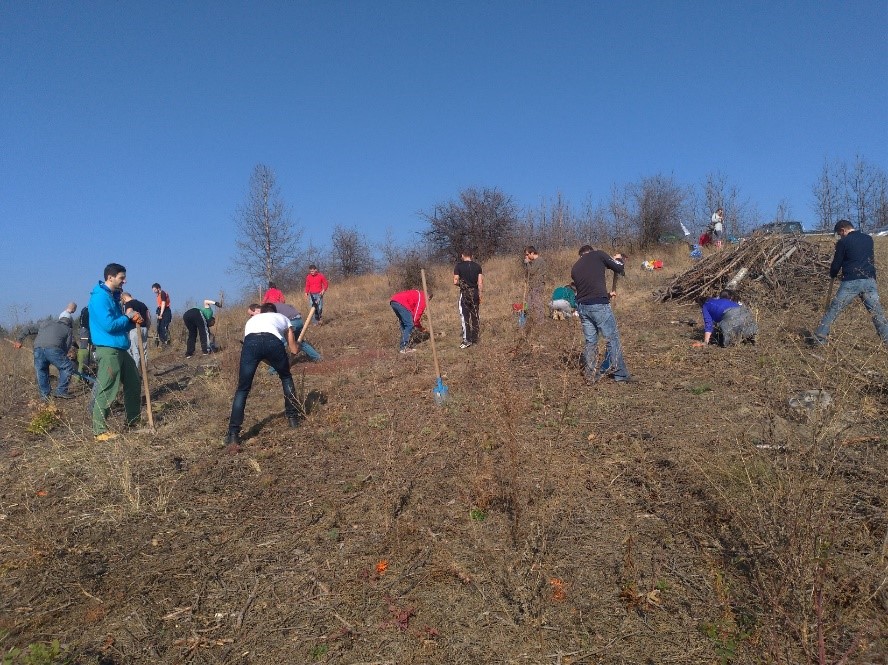 The Planting
After all the walking, it was time to plant the trees in the areas near Sofia, Bulgaria. The area for planting was empty land that could be afforested and areas of woods that were burned by fire few years ago. The goal was to plant the “New forest around Sofia”.
And what better time to do this than our Month of Service? Teams went together and for one day they planted more than 1000 trees. The rain and the mud didn’t stop their enthusiasm and they managed to do the work faster than the organizers were expecting. A lot of the volunteers were the ones who had walked in the challenge or from a team where somebody had been involved. The result
The feedback from the initiative was so positive that we did it again last year – we organized the activity challenge during the summer and planted trees during SAP’s Global Month of Service.
Our colleagues are really inspired, feeling that it depends on their efforts to contribute to the planting of more and more trees. While some colleagues walk, others plant trees – and the more everyone walks, the more tree saplings we will buy.  Some of them were even saying “I’ve contributed 20 trees this year”.
With our initiative a lot of colleagues get engaged in making our city a better place to live in and also contribute to something with longer lasting impact. Over two years we walked 65504 km in the activity challenges and planted 2440 trees around Sofia with the help of 262 volunteers from SAP.

Making it a Tradition
This summer, we organized the activity challenge again. And for a third sequential year, more than 1000 trees will be planted during SAP’s 15th Month of Service. More than 100 volunteers will participate again in the planting, setting an example on how with small efforts in a team, for the right cause, we can make a big difference and experience great positive emotions from our achievements and contributions!

We encourage all colleagues around the globe to take active participation in the Global Month of Service and come up with ideas that inspire others to contribute and volunteer for the good that we can create around us!

You would like to learn more about SAP’s Corporate Social Responsibility strategy and programs? Check out our 2018 Ebook or visit sap.com.