We have released new versions of the SAP Cloud SDK. Before taking a closer look into what’s new, there are a few other exicting topics to mention.

Also noteworthy is this blog post about certification options for solutions on SAP Cloud Platform. The SAP Cloud SDK helps you on your path to a certified solution. In particular, the SAP Cloud SDK for continuous delivery supports you in achieving the Cloud qualities checked as part of the certification, and provides a corresponding report about qualities considered by the pipeline. Look for the corresponding artifact in your Jenkins job. Please note that this is only an indication for the qualities considered as part of the certification. It will help you demonstrate the Cloud readiness of your processes, but provides no guarantee and is no prerequisite for certification. 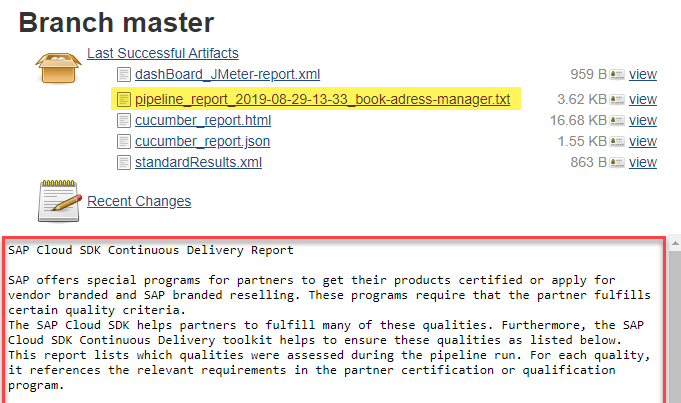 After these news, back to the new version released today. In detail, the following components are now available in new versions:

In this blog post, we will walk you through the highlights of the new releases. For a complete overview, visit our release notes for the Java libraries, for the JavaScript libraries, and for the continuous delivery toolkit. The release notes also include the change log of all our releases so far.
At the end of the article, you will find a set of instructions on how to update to the new versions.

Less than two weeks to go until SAP TechEd 2019. Learn more about the sessions featuring the SAP Cloud SDK in our dedicated blog post.

You can update your dependencies of the SAP Cloud SDK for Java to version 3.3.1 and consume the new version from Maven Central.

We have updated our tutorials to version 3 of the SAP Cloud SDK for Java. You find the updated versions in the tutorial navigator on developers.sap.com. For your reference, the previously existing blog posts describe the state as of version 2 and will not be updated going further.

In the tutorial navigator, you also find a new mission that encompasses the most important steps using the SAP Cloud SDK.

Furthermore, we have published a brand-new tutorial on migrating to version 3. At the example of the address manager application known from our book and tutorials, the tutorial explains step-by-step how to move this application to version 3. Migrating any other application will follow similar patterns, so this tutorial will prove helpful for everyone, in addition to our migration guide.

We have updated the dependency to the Java libraries of SAP Cloud Application Programming Model (com.sap.cloud.servicesdk.*) from version 1.32.5 to 1.33.0.

For a complete view on what has changed, take a look at the full release notes.

The JavaScript libraries of the SAP Cloud SDK are now available in version 1.9.0.

The OData client now supports sending update request to OData APIs with PUT semantics (replace). While PATCH remains the default, you can now control the HTTP method and strategy to use for update requests. To use HTTP method PUT and send the full entity that is meant to replace the current state of the entity, call the replaceWholeEntityWithPut method on any update request builder.

You can instruct delete OData requests to ignore version identifiers and force deletion independent of the entity state in the target system by using the ignoreVersionIdentifier method.

Version 1.9.0 introduces support for the “Location ID” property of the Cloud Connector in on-premise destinations.

We have fixed several issues with overly strict expectations regarding CSRF token handling.

As usual, the full release notes contain a list of all improvements in this release.

To update the version of the SAP Cloud SDK Java libraries used in an existing project, proceed as follows:

If you update from a version prior to 3.0.0, have a look at our migration guide.

Of course, you can also generate a new project that uses version 3.3.1 from the start by running the Maven archetypes for Neo or Cloud Foundry with -DarchetypeVersion=3.3.1 (or RELEASE).

To update the version of the SAP Cloud SDK JavaScript libraries used in an existing project, use the command npm update in the root folder of your module. Note that this will also update other modules, unless you explicitly specify which packages to update. If you want to check beforehand what will change, use npm outdated.