In a recent engagement a customer requested help with improving the workflow for Sales Orders for their S/4HANA Cloud Multi Tennant Edition (S4HC for the rest of this blog). The customer found some limitations with the S4HC inbuilt workflows and was looking for a more flexible option – something like the SCP Workflow Service provides. This was a great showcase for some of the extensibility options of S4HC and the SCP Workflow. I therefore decided to create a small PoC to illustrate the possibilities in this area.

The architecture I had in mind was the following

There are the following parts to setting up this functionality

So let’s go through the steps one-by-one

S4HC provides configuration options to trigger internal or external approvals for the document categories Quotation and Standard Sales Order – unfortunately only these two categories are supported as of S4HC release 1905 – hopefully we will get some more options in the future! To configure these I went to the SSCUI for “Sales Document Approvals” in “Manage Your Solution” App. 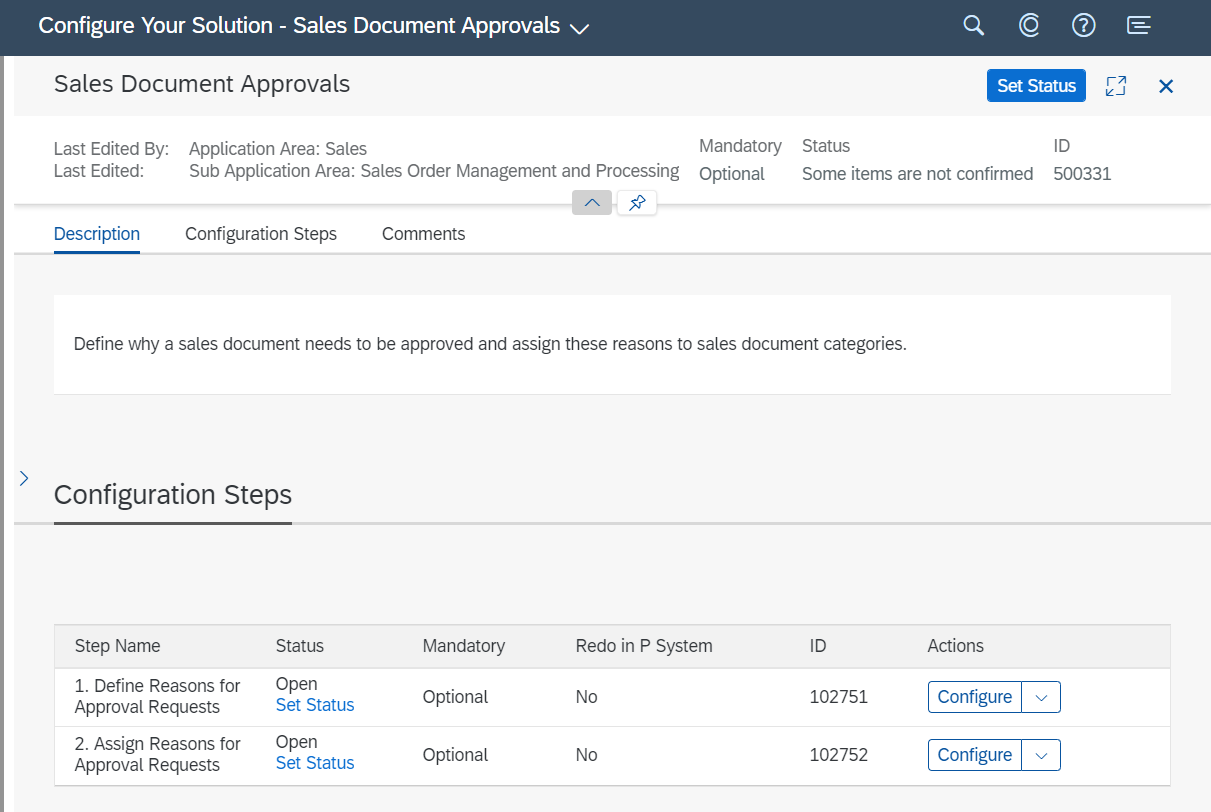 First step is to setup reasons for Approval Requests

Next I had to assign the Approval Request Reasons to the Document categories. I made the external Approval reason available for Standard Order (Category C) and also added the internal one (again, just for fun) 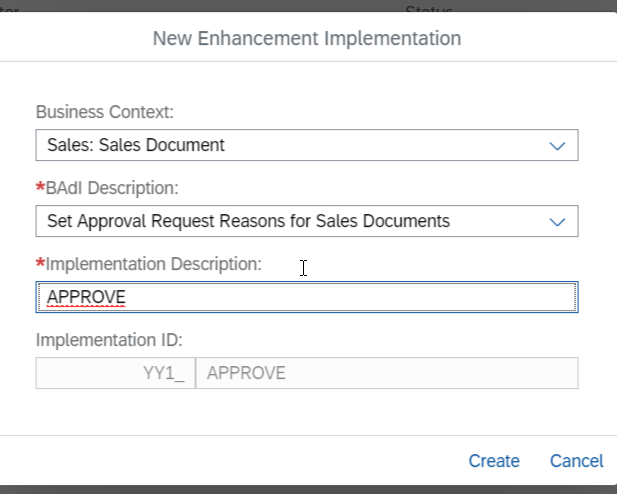 I put the following coding:

That will put each SO (Type OR) created or changed in approval status.

Quick test – I make a change to a sales order, save it and then try to go in change mode – system throws a hard error: Checking the order in display mode I can see that the Approval Status is set with the Reason Text I had configured previously – so the configuration and BAdI work. That was the easy part, now I had to take care of the actual approval.

Fun fact: Initially I had hoped I can avoid using EMS by triggering the Workflow directly form the In-App extension (the “ABAP Light” in the S4HC BAdI supports HTTP calls after all via cl_ble_http_client). This worked great when changing a Sales Order, but when creating a Sales Order the Sales Order ID is not set in the input parameters of the BAdI when the BAdI is called. Ok, could have also gotten this little fact form the documentation before doing all the tedious coding – but who is reading documentation these days… At least I can put the coding in this Blog to show some nice example for Webservice Calls in S4HC In-App extensions (and it actually worked for changing SOs!). To make this coding work I also had to create two communication scenarios.

After finding out, that the In-App Webcall would not work I hit a lucky streak – a colleague working on another PoC had setup the EMS for Sales Orders – so I just had to add my a little parasitic Webhook to his EMS queue and go the rest for free. There are some good blogs / documentation on how to setup EMS, so I won’t go into detail here – e.g. check the online help

Configure EMS in SCP with a Webhook

There are two ways us consume the EMS messages in SCP Cloud Foundry (CF) – you can create an Java app and link it to your EMS Instance (my colleague did this for his PoC and is seemed pretty cumbersome) or use a Webhook, which the EMS will call whenever a new message comes into the queue. I chose the latter. To use the Webhook I had to make sure the EMS Instance in SCP CF  was created with the following JSON option – and luckily it was! 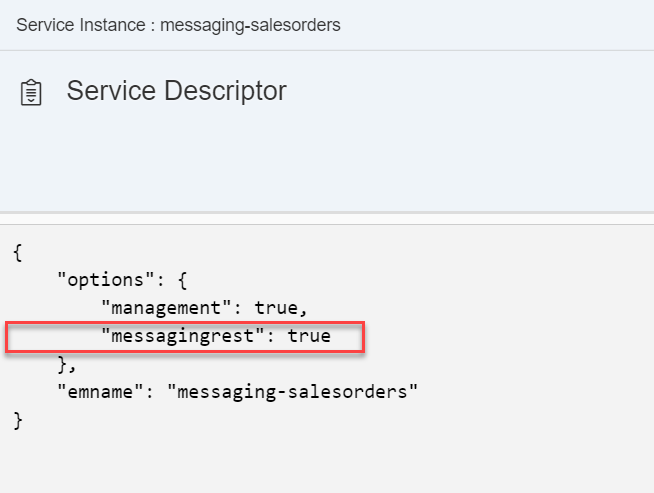 To create the Webhook I went to the EMS Instance, open the Dashboard and then navigate to Webhook subscriptions and click on “Create” – I used the following settings – there is a good online help on the webhooks 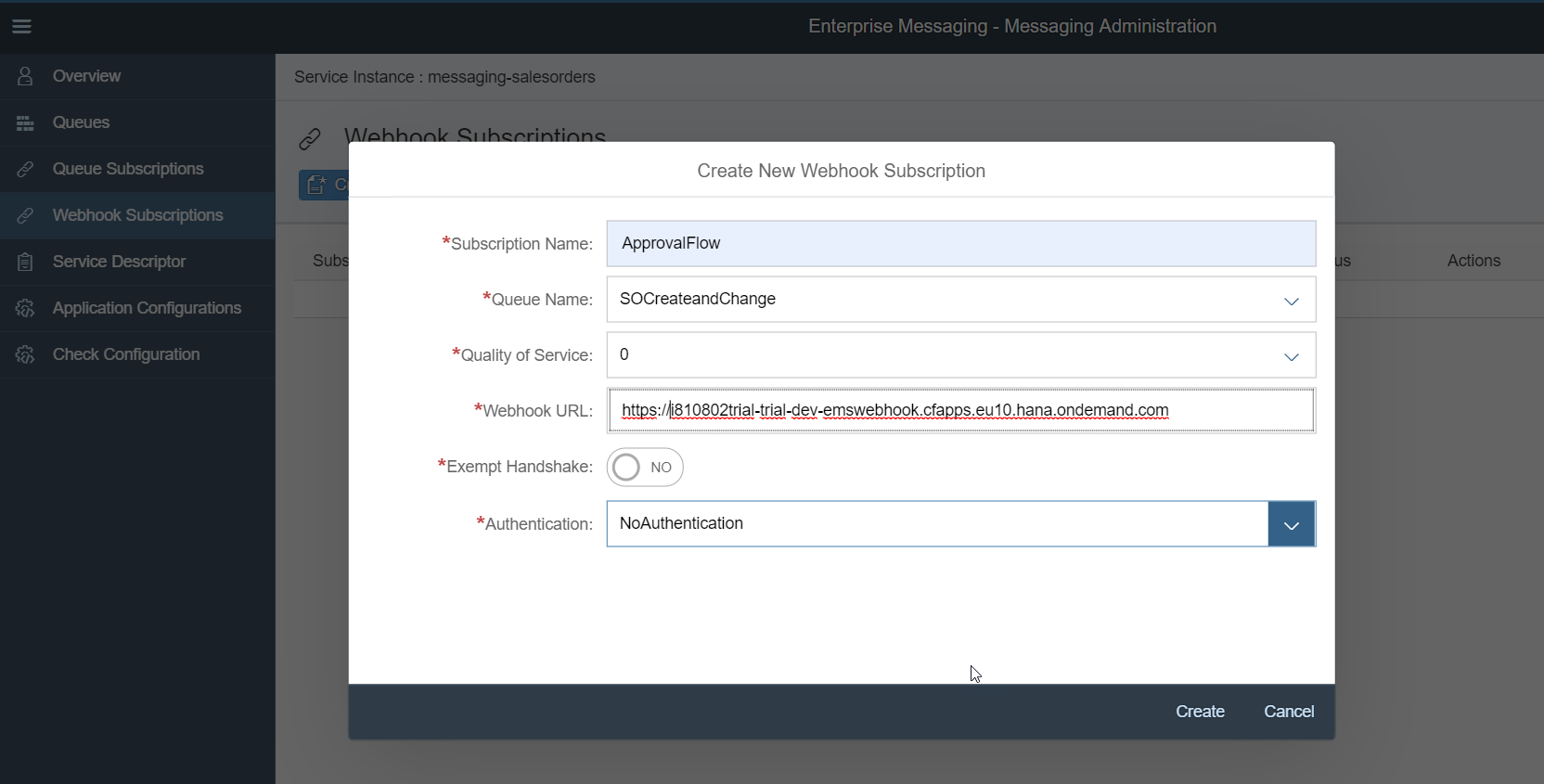 As explained in the help, the Webhook needs to make a successful Handshake call to the Webhook URL, before it becomes active. Basically, it calls the Webhook URL with an HTTP “OPTIONS” call (yes, there is such a thing) – and the Webhook Endpoint needs to reply with a response header WebHook-Allowed-Origin that match with the request header WebHook-Allowed-Origin or is “*”. I show in the next section how I did this in the node.js app. To trigger the handshake we use the little handshake icon, which will change the “Handshake Status” to Completed if the Webhook Endpoint is behaving as it should. From now on EMS sends a notification for each Queue entry to the Endpoint.

Configure EMS in SCP with a Webhook

To use the EMS Webhook, I needed to create an endpoint to trigger the Workflow. I decided to create a node.js app for that purpose. I created an MTA project in the WebIDE with a single node.js module and deployed that to a Cloud Foundry tenant. Coding of the module below (it’s a PoC, so taking some shortcuts like hardcoding URLs, no error handling, etc..)

The above coding answers to the two types of requests coming from EMS:

I deployed this node.js App to my SCP CF Trail Account.

There are several good blogs out there, explaining the creation of Workflow. The Workflow Service comes with a very nice editor, where you can click together a Workflow in WebIDE. For the UIs to let the user approve items I had to create a separate SAPUI5 App. The Workflow will later embedded these UIs into the Workflow Inbox Standard App. I created the following simple flow with a 1 Level Approval in case of a Total Net Value <1000 and a 2 Level Approval otherwise. The steps do the following:

A very simple logic to determine the two approves for the level 1 and level 2 approval based on the creator of the sales order. If we have no configuration for a specific creator, we use the default approvers. For this simple example we use the same approver for all approval levels (Imagine a very small company with one employee who likes to wear a lot of hats…). Once we find the approvers we add them to the Workflow context.
Instead of hard coding the rules for the approvers here, the Business Rules Service probably would be a good fit for a real implementation (or even a more sophisticated PoC).

Here I call a very simple FIORI UI, which represents the approval screen shown to the approver when they click on the approval request in their Inbox 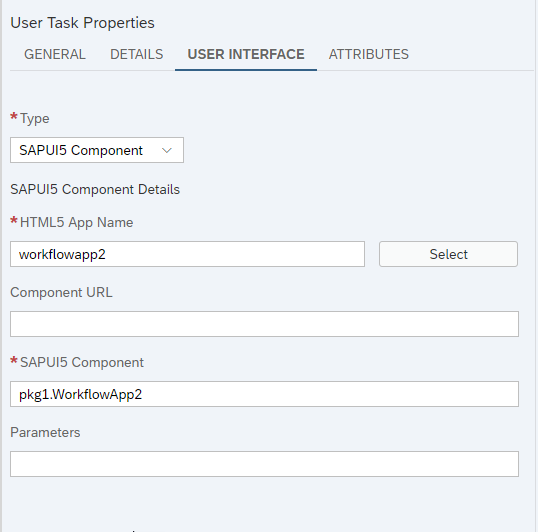 And the component.js, which contains the logic to deal with the Workflow Context. The workflow does not provide me the context automatically but I have to get it through a call to the Workflow API. I am using the destination bpmworkflowruntime, which gets created automatically when the Workflow Service gets enabled.

This results in the following UI Screen embedded in the standard “My Inbox” transaction (I know, pretty basic – but we are just doing a PoC): 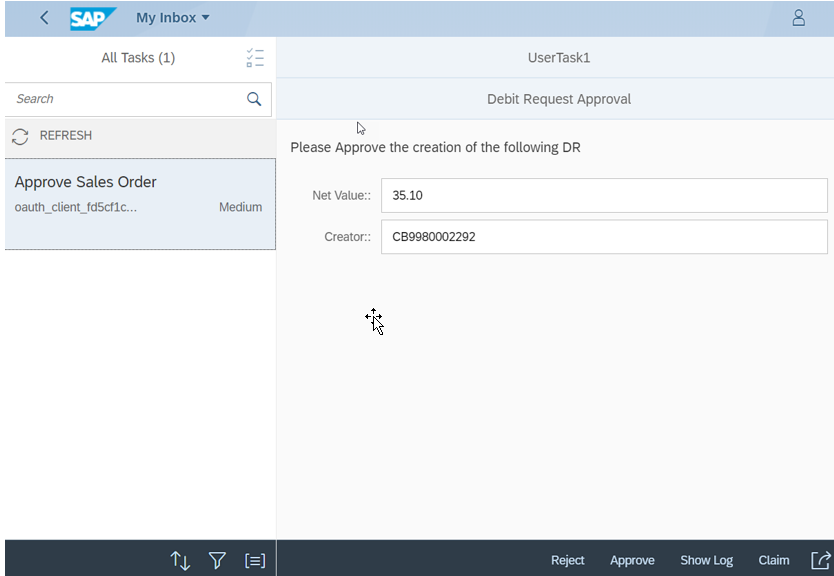 Simple logic to determine, if we are good with one approval or whether we need a second approval because the total net value of the Sales Order is equal or bigger than 1000.

The Workflow execution will go down this path, if there is there is a next approver named in the Workflow context. (Which is the case if the Sales Order Total Net Value was >=1000) 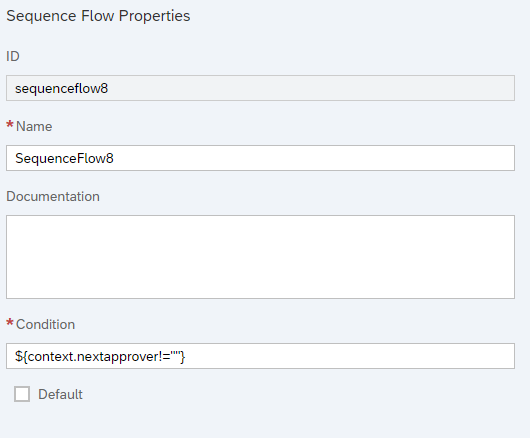 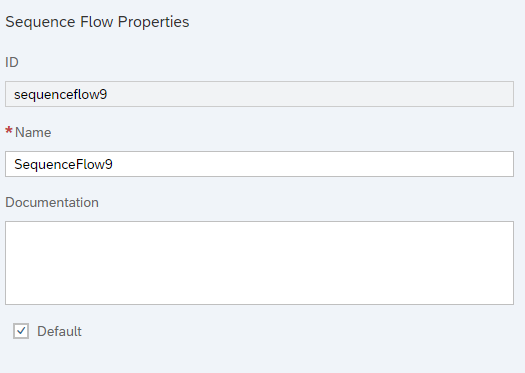 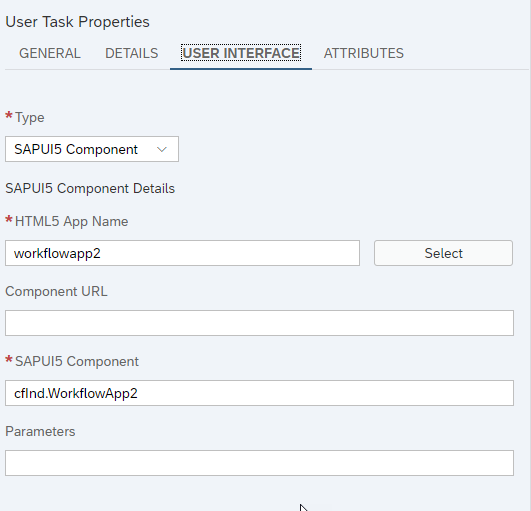 If the Workflow Execution makes it to this step all approvals were given, and I need to finally Approve the Sales Order in S4HC via an API call. There is an extra API Endpoint in the Communication Scenario SAP_COM_0109 to release Sales Orders. The Sales Order ID is passed in the simple way via the URL parameter: 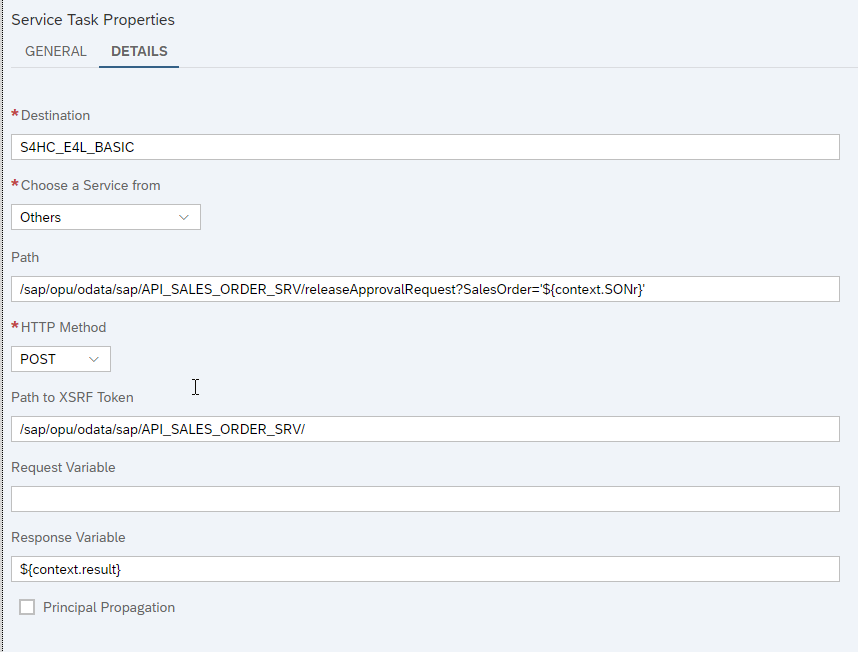 Voila – mission completed! I finished the setup of a S4HC-In-App-Extened-Enterprise-Messaging-Service-triggering-Webhook-with-Multi-Target-Application-Endpoint-executing-external-Worfklow-Approval Process (hope I did not forget any of the buzzwords here).

Hope you have fun building your own great S/4HANA Cloud SCP extensions.

this is impressive! 10 minutes agoe, before having read your blog, I would have bet 1000 Eur that something like this would be impossible.

You proved me wrong.

Another GREAT takeaway for me: Make http calls from within a "ABAP light" Badi, yes this opens up possibilities!

Great post - Thanks! Love the tone - great for keeping the audience engaged 😀

Nicely written, thanks for sharing!

Nice one. You might want to have a look at functions as a service (which is still in beta on SCP), which does the heavy lifting of connecting to EM quite nicely! In that case you could easily paste in your nodejs code into the FaaS, without having to know about how to deploy NodeJS applications on CF. In this case i think the business logic is quite granular in size, so a function would in my opinion be the best tool for the job. Thanks for sharing!

This is amazing Philipp. Great Work! Thank you.

This opens all new opportunities for us.