Azure EventHubs is a fully managed service that allows exchanging messages between systems in real-time. It’s capable of receiving and processing millions of events per second. SAP Data Hub doesn’t directly support Azure EventHubs, but the connection can be established using Kafka protocol. In today’s post, I would like to show you how to provision the Azure service and how to configure the connection. At the end, I will also include my ABAP system to stream SAP data.

Kafka resource types can be mapped into Event Hub:

The highest entity in the Azure Event Hubs is the Namespace. Each namespace contains one or more Event Hubs that translate into Topic in the Kafka world.

The easiest way to deploy the Event Hubs Namespace is to use the Azure Portal. To enable Kafka connections you need to choose a Standard pricing tier. It takes a couple of minutes to deploy the resource.

The first thing we should do is to analyze the Firewall rules associated with the Namespace to enable connection from the SAP Data Hub. The communication can be limited to selected networks or even specific IP addresses. The firewall can also be disabled.

I allow only connections from the virtual network and the subnet where my SAP Data Hub is running.

Next, let’s create the Event Hub (a topic) that we will use for data streaming. An interesting option is to Capture all messages to cloud storage. I want to check this functionality and save all messages in the Data Lake. The broker hostname is the connection endpoint. The username is always “$ConnectionString” (without the quotes). As the password use the entire connection string. In order to establish a secure connection, we’ll also require the Event Hub certificate. It’s not possible to download it from the Azure Portal, but we can use openssl libraries: Copy both certificates, save them as a single file and import into SAP Data Hub:

The connection test for Kafka endpoints is not supported. We’ll verify the connection after building the pipeline in the Data Hub Modeler. I’m using the Message Generator to create content to be sent to the Event Hub using Kafka Producer operator. On the same graph, I also included Kafka Consumer that reads the messages from the queue and passes them to the Terminal.

For both Kafka Producer and Consumer operators select the previously created connection and enter the topic (Event Hub) name: 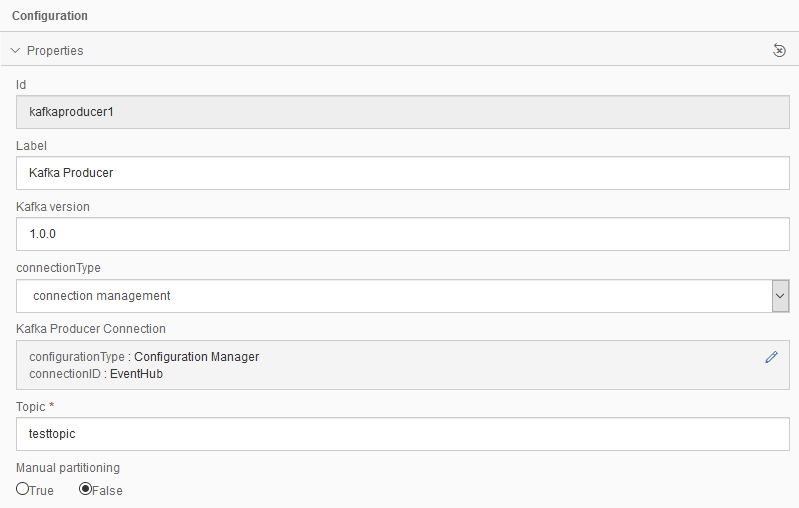 Now let’s start the pipeline and check if messages are flying. Use the terminal to verify the results:

It’s all good, the connection is working. In the Event Hub monitoring in the Azure Portal we can see statistics:

Using the Event Hub features the messages are also streamed to the Data Lake store.

But there one more thing I would like to present. Using the ABAP connector the SAP Data Hub can stream SAP data directly to the Event Hub. Let’s slightly modify the pipeline:

I pointed the ABAP operator to my test NetWeaver system with the EPM Demo data. Then I changed the batch size to 1 on the CSV producer. Each record read from the SAP system is now sent as a separate message to the Event Hub. We can see the data preview in the terminal:

Do you have some write up comparison to choose between Azure Data Factory or SAP Data Hub to push SAP data into Azure Data Lakes?

Any leads or best practices would be greatly help. It may be a batch data processing not necessarily real time stream data.

I'm sorry but I don't have any comparison between SAP DataHub and Azure Data Factory.

A great series of posts, Bartosz! We look forward to continuing 😉