SAP Cloud Platform Business Rules enables you to define and orchestrate critical decisions and business policies in easy-to-use web-based tool. As the outcome of the business rules is used to implement dynamic decisions at runtime, it becomes important on how the outcome is evaluated. One of the most common use case during rule evaluation is rule chaining – which means consuming the output of the previous rule in next rule evaluation be it expression modelling in conditions or defining actions of the rule.

Decision Orchestration in business rules now supports sequencing of rule to evaluate the final output. Using this feature, you can define the order of execution in the context of making decisions. Decision Orchestration can be achieved in 2 ways: (a) you can use the output of one rule, as input or output to next rule and (b) you can create rule with reusable expression or formula and then call this rule while modelling other rules. This simplifies the rules modelling especially in cases where reusability is the key.

If you have such requirements in your project, then you are at the right place. In this blog I will explain in detail what are different ways of rule orchestration and how to build and use them in SAP Cloud Platform Business Rules.

Let me explain you with an example.

Consider the below rule Additional Discount Rule. In this rule, the output of this rule is collected in a data object called Seasonal Discount Now let us consider another rule Global Promotion Rules, which is added after Additional Discount Rule in the ruleset. 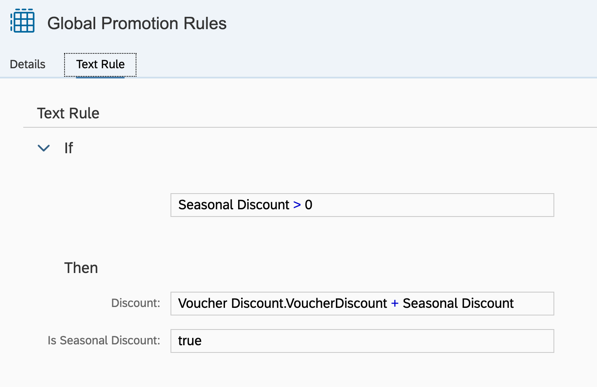 In simple terms, vocabulary in rule service is available while executing or invoking rules while the vocabulary defined in the rulesets are intermediate and will be used during evaluation of the rules but not needed as input or the output of the rule service. 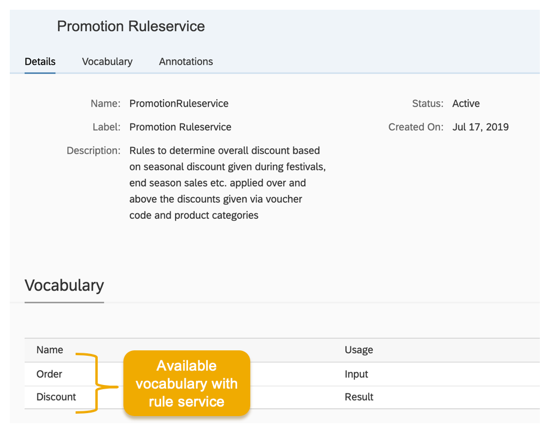 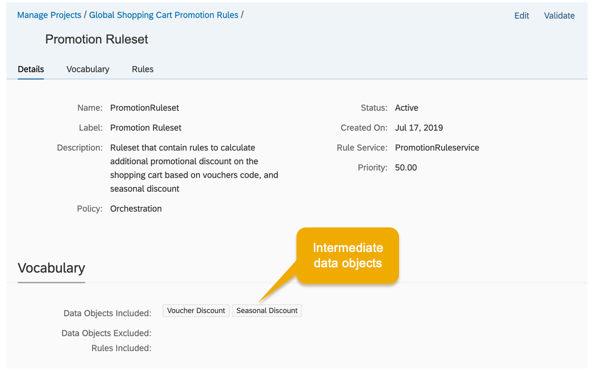 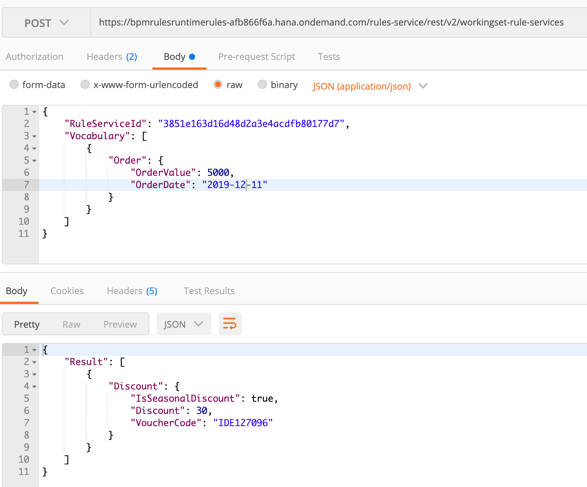 That completes the first part of using decision orchestration capabilities in sequencing rules. You learnt how you can model rulesets with orchestration policy, how to sequence the rule by consuming the output of previous rules in condition and/or action expressions, how to smartly design the rule with intermediate variables and finally how to read the output after execution the rules using APIs.

In the next part, I will show how you can model formula or reusable rules.

Thanks for the great blog, it is working like a charm in SAP Cloud platform.

How do we do decision orchestration  for two decision tables . In case of rules which have a decision table as input , there are chances that we will have other inputs apart the one derieved from the previous rule . So what would be the input while executing the service

I am trying to add a 'AND' operation in my IF statement and it is not allowing me to do so. Not sure on how we achieve this or this is not available in Business Rules as of now ?

That should be possible. can you add a screenshot to show what exactly you doing.

I have figured this out and it did work. But I am actually stuck with one of the operation 'LOOP'. I get an input as part of an Array(Multiple Rows) and I need to give the output as an array based on certain rules for each row. I couldn't find Loop in the Expressions - Is there any other way to achieve this ?

I'm using Orchestration rules where the output of one rule is used as input for another rule. If the output is just one value , then I can use it as input for the next rule.

The issue I have now is that the output of the first rule is a list table ( more values) and I want that as input for my next rule, but it doesn’t work.

The objecttype of the input rule (Vocabulary) is also a table. Any suggestions how I can make this work?

Hello,
It should work, can you let me know exactly what you are trying to do with the table output that you get? If the output is table, then you need to use table functions or aggregation functions to access the values.

Thanks for you're respons. See  example what i want to achieve.

I get no results back.

Table output can be used in subsequent rule in the ruleset. Only select and aggregate functions can be performed on table data objects. If you are looking for using each row of a table dataobject, you can try using FOR EACH function to loop through each record.