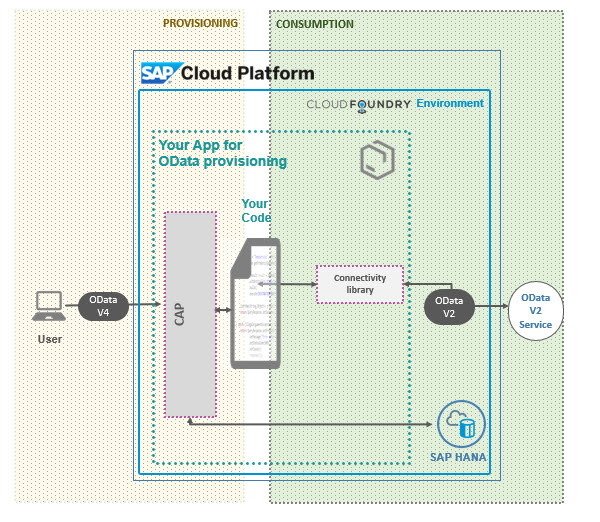 The provisioning-side was already covered in the previous tutorials.
Today I’d like to describe how to execute a deep insert on the consumption-side

Scenario:
We expose an OData V4 service with very small customized model
The service should allow to create simple Orders along with the corresponding Order Items
We don’t have persistence in database, because there’s an existing remote OData V2 service, which we can reuse
The data model of the remote service is slightly different
When the user of our V4 service executes a CREATE operation, we adapt the data and send it to the remote service

1) We need a remote OData service which we can call from our implementation code
That remote OData service must be available for public and for free
It must support write operations, otherwise we cannot test the deep insert
Luckily, there’s a solution for our requirements: the OData V2 reference service
In order to access it, you need to sign up to the SAP Gateway Demo System (simple)
Announcement blog: Demo System Available
How to get an account in the demo system: Sign up to Demo System
SAP documentation about the Sample Service

2) Another prerequisite is the first tutorial on deep insert, which can be found here.

We create a CAP project with name DeepInsertRemote and java package com.example and we use OData protocol version V4

Data model
Our little CDS model defines 2 entites, associated to each other

We have a one-to-many relation from Order to Items
It is a managed “Composition”
Why not association?
We could define it as to-many association as well, there isn’t much difference.
So why “Composition” ?
But by choosing “Composition” we declare that the “Items” belong only to their “Order”.
It wouldn’t make sense to call the “Item” collection as standalone.
Note that an “Item” is not a “Product”, it is just an entry in the list of an order, where the orderer notes down which things are ordered
Therefore, it makes sense to define the association as “Composition”

In the service definition CDS file, we need to make sure that our entities are not “autoexposed”.
Note:
Autoexposed means that you can define model and service and then deploy and you have a running OData service with connection to a database.
Means: No coding required, so “autoexposed”

In our case we don’t want a database, because we use an existing remote OData V2 service, to get and store data.
Means: no autoexposure, so coding required
That implies that we have to manually code every operation (see below)

Coming to the required java implementation, we know that we would need to code all operations ourselves (QUERY, CREATE, etc).
However, in this blog we want to focus on implementation of deep insert, so we skip all other operations and implement only the hook for CREATE

Note:
In our @Create implementation, we even don’t support normal CREATE, without inline data

So what do we need to do?
We implement the CREATE operation and we need to support deep insert

In our case, the second point means to do a CREATE on the remote service
So, the user of our service (V4) calls us and sends a payload which contains nested (inline) entity (deep insert)
We take that payload and send it to the remote OData V2 service, again as a deep insert.

Sounds  like easy task
Yes, it is, but there’s some tedious manual work to do:

Our data model doesn’t match the remote data model:
It has similar structure, but different property names
So we cannot simply forward the payload. We have to adapt it.
As such, our concrete steps look as follows:

Doesn’t look too bad
Yes, but….
The tedious manual work is in the helper methods
What exactly do we have to do?

2. convert
We create a new map which will be used to send to the remote v2 service

We take each property out of the v4-map

and put into the v2-map

This line shows how the different property names are mapped

One more task to do while converting:
If the remote service has additional requirements, that our service doesn’t support, we need to fulfill it manually.
In our simple example, we’re just hard-coding some values:

Coming to the actual deep insert, the nested inline data (associated entitiy):
We get the nested data as nested map, it is accessed via the navigation property, afterwards processed as usual

The line shows that the nested map is not a map, it is a list.
The reason is that we modelled a one-to-many association, so we get potentially many nested maps

4. convert the v2 response to our v4 model
In this step we have to do the same work like in step 2, but the other way around

5. compose the response of our v4 service
We’ve already converted to the right format, so we can just put it into the response object

Before deployment, we do the 2 small modifications to the mta.yaml file, as described in previous blog

In addition, we need 2 more changes:
Add  the destination information, which will end up in the environment of deployed application
First, declare a new “resource”

Second, use it in the service-module:

AFter deploy, to test our implementation of deep insert, we fire the following request in our favorite REST client

To test the successful execution I suggest to invoke directly the remote OData V2 service.
We can compose a single READ URL with the ID which we received above (‘0500000509’) and with expanded LineItems: 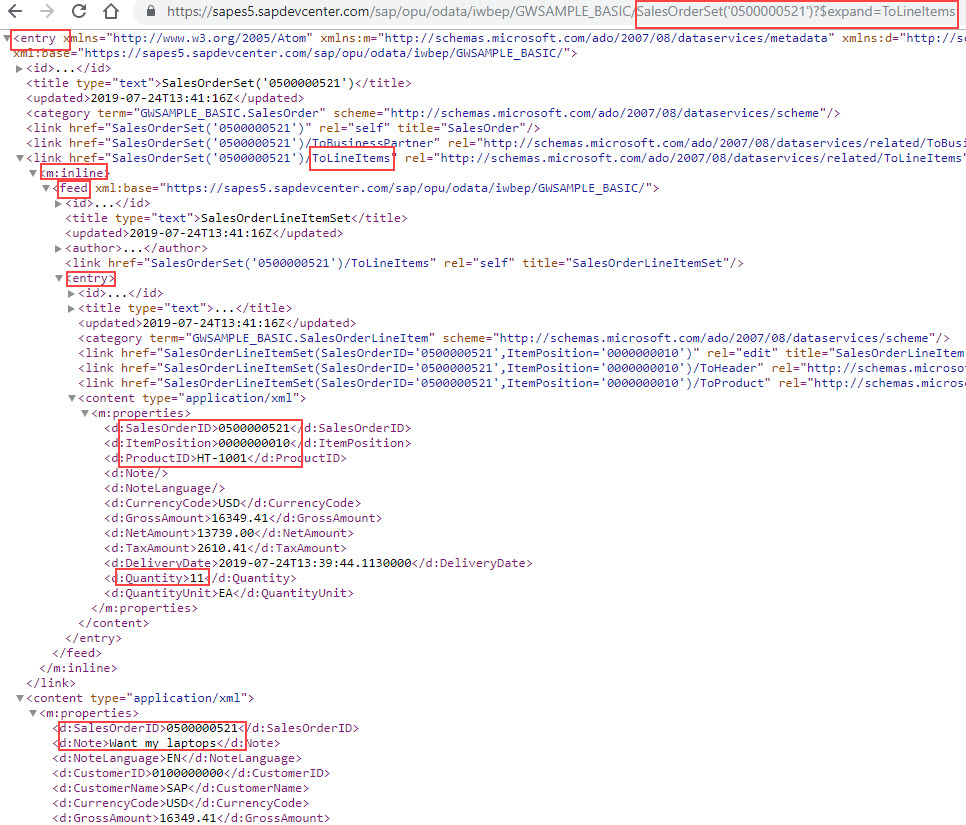 Why can’t we use our own v4 service?
We can not
We don’t have autoexposure in our service, because we marked it as cds.persistence.skip
As such, we cannot execute any GET request

In this tutorial, we’ve learned how to execute a deep insert on a remote OData V2 service.
We’ve also showcased the way of transforming the payload a OData model to a different OData model
We’ve seen, implementing the usage of remote service is easy, but all the transformation code in 2 directions is tedious
It is tedious because we have to deal with Maps and property names
It becomes more readable and less tedious if we use the SAP Cloud SDK and the “Virtual Data Model” (VDM)

To make it clear again:
The steps are always the same (only if models are identical, no conversion is necessary)
In this tutorial we’ve used the generic connectivity library, which requires that we build and execute requests etc
BTW, this library also supports usage of proxy classes instead of maps. And such pojos can also be generated on command line (or maven)
In the next blog, we’ll do the same deep insert implementation, but it will be based on the SAP Cloud SDK

Which are our next steps?
Wait
Wait? For what?
For the next tutorial to appear