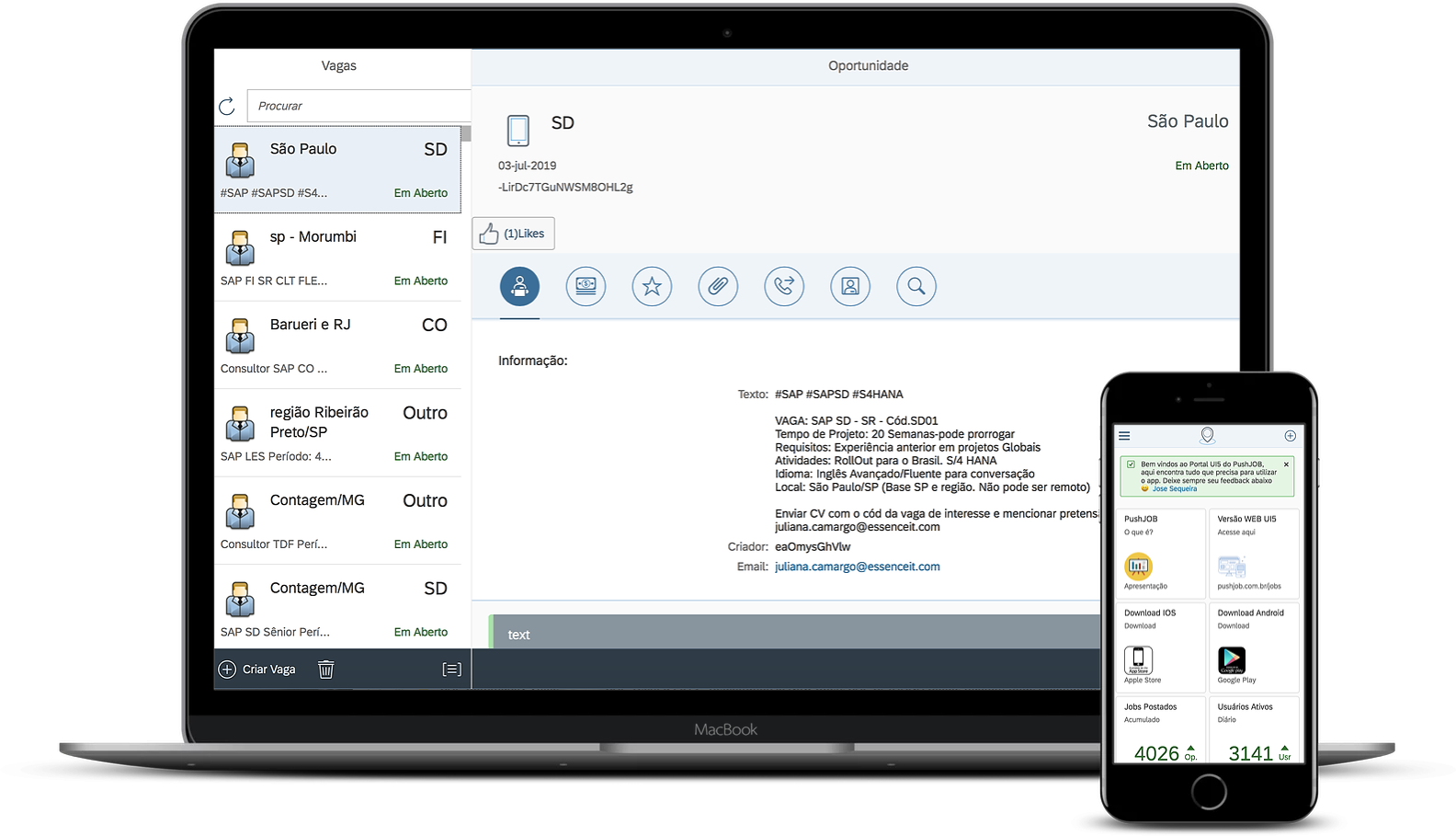 By mid-2015 an idea was born, to create a solution to manage SAP® Job opportunities for free here in Brazil ??, but why?

At that time there were (and still are) many groups of emails/Skype etc., which we only receive in text form (by the recruiters) the vacancies, leaving some aspects of the jobs search “experience” with opportunity of improvements, examples:

1- The vacancies were posted from all the modules together (ABAP, MM, SD, etc.), making it difficult to follow the history of the vacancies of interest.

2- Because emails/groups are “open”, sometimes parallel conversations/emails happened without the necessary focus.

3- Many tools/places to search, etc.

“Joining” my mobile development experience with the idea of a “single place” to look for SAP® jobs, I decided to start the PushJOB project. With the idea of each job posted, the user would receive a push notification advising of it, changing the “form” that the user relates to the SAP vacancies (now they would come to the user, as opposed to searching in various places). Main objective was not to compete with other forums, but to create a simpler and collaborative option, ALWAYS at no cost to users (consultants or recruiters) ??.

So i developed the native apps in IOS (Objective C back then) and Android, initially with the following features: Push Receipts for your selected module’s vacancy, list of vacancies (choosing favorites) Offline and some settings. At the time the solution was running on top of the extinct Parse®, which was managing the database in the cloud. After a “rather modest” marketing, in the same email / Skype groups that helped me get the idea, the app was being downloaded and used by fellow SAP consultants throughout Brazil ??. The initial idea would be for the recruiting staff themselves to post their vacancies, but at first I myself (with the help of some colleagues) manually posted the vacancies, to show that the solution had content (a small push in the beginning ?), but who gradually learned to “walk alone.”

Marketing example back then: 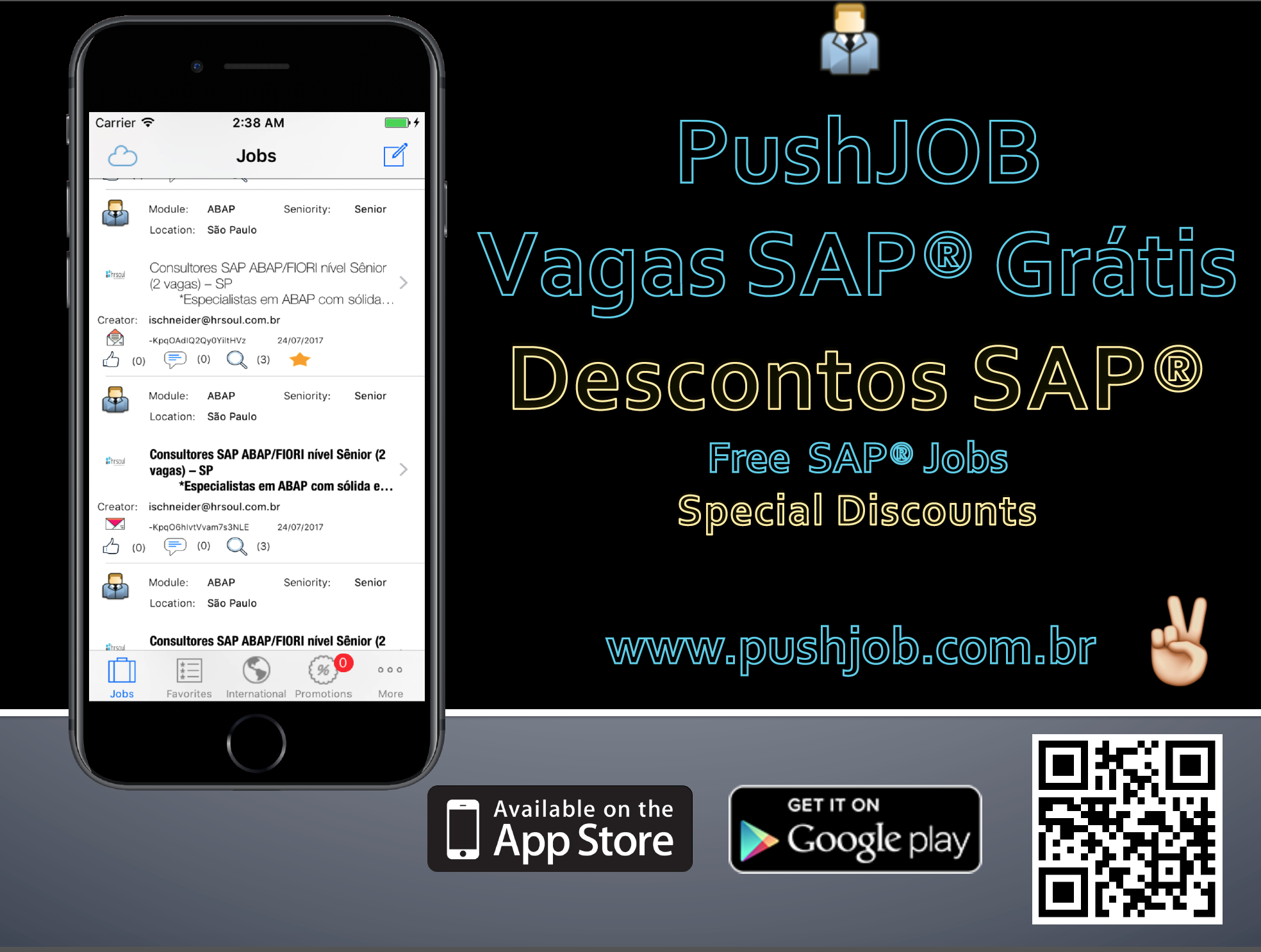 When SAP® FIORI was “released” in Brazil, I also decided to create a WEB version (in SAPUI5 (open version, OpenUI5), “FIORI Like”), to demonstrate the UI5 “running”, even without integration with an SAP environment, the FIORI UX for the users, and leave the PushJOB more with an “SAP face”. This WEB version runs today at http://www.pushjob.com.br

In early 2017, the database solution used (Parse®) was purchased by Facebook and got shut down ? (they did notice in advance): https://techcrunch.com/2017/01/30/facebooks-parse-developer-platform-is-shutting-down-today/

So I had to redo all the integration part with database and loooooots of changes ?. Even though I’d never charged anything to the users, the feedback received from colleagues who got allocations thanks to the app kept me motivated. I then went to Firebase (https://firebase.google.com ), which after a lot of work managed to leave next to the old version (I had many problems in the IOS version, which today is still out of the air), more with instabilities. Then I inserted new functionalities as: interaction with the vacancy (like / comment), courses, international positions, promotions, etc. without so much grip.

Currently the WEB version is running (UI5) and the Android version too, but without maintenance for some time (due to lack of time ⏰).

In summary, I believe that the “PushJOB project”, thought/carried out years ago (always non-profit), was a success for me and for all the consultants who have been able to get allocations and projects for free. Currently, there are new options for job openings (such as Telegram, LinkedIN itself) and several emerging platforms (free or not) that deliver this SAP® vacancy management, yet PushJOB is still on the air with the goal of helping until he becomes obsolete (or who knows at any moment to receive a new update and “come alive” ?).

Thank you to anyone who downloaded and contributed to the project in any possible way ??.