I was exploring on the topic ‘ABAP Unit test ‘ and while doing so , read few very good  blogs , like the one by Nithya Murugesan (can be accessed here ) . Another good one here and the standard sap help .  I found the information is scattered and more can be added to it as well, so i thought of writing my own blog on the topic.

Before I show you how to do it with very simple example, let’s try to answer some basic questions…

What is ABAP Unit?

ABAP Unit is a unit-testing framework that is integrated into the ABAP language.

Unit tests are to ensure the correct behavior of the smallest testable units – such as the methods of classes , performs, .. ABAP unit lets you test the code at unit level like testing each piece separately.

What are the features of ABAP Unit?

How to write these unit tests?

For writing Unit tests, methods in global class CL_AUNIT_ASSERT  are used . Local classes are implemented to insert test cases. Inside the local class the required method from the global class can be called for testing. These test classes can be written inside the program for which the test is to be done. Production code is not affected by this in anyways.

The class CL_AUNIT_ASSERT contains the following static methods for the verification of test expectations within ABAP Unit test methods:

All the methods have the optional importing parameters MSG, LEVEL, and QUIT, which always have the same meaning:

All the assert methods have the following mandatory importing parameter:

The comparing method ASSERT_EQUALS additionally requires a parameter for the expectation:

What’s the difference between Normal class and Test Class?

Test class and the methods in the test class need to have “FOR TESTING” added in the definition. For e.g.

Enough of talking let’s see some code in action. I will show a very basic example to show how it works. The flow will remain same but the code complexity can go to any level.

So, I taking example where in my program ZDEMO_ABAPUT I have class lcl_Customer_SOCount with method Order_Count. The method takes Customer number as input and returns the count of sales orders created for this customer. Very simple isn’t it!!! 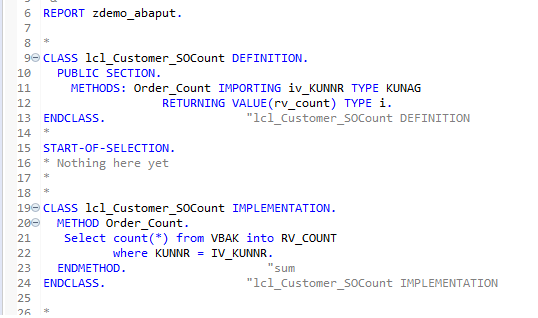 As you can see, nothing in the Start-of-Selection yet.

So, now we want to write ABAP unit test to check if this method works fine. To achieve that, we need to implement the local testing class with addition “For Testing” as mentioned earlier.

In the implementation of the test method, m_count in this case, we will call the ABAP unit that we want to test i.e. method lcl_Customer_SOCount to fetch the order count for customer ‘0001000030’.

The method’s result is stored in variable lv_result. Now, we can use methods of global class CL_AUNIT_ASSERT to compare the result with expected result. So in this case, we will use method ASSERT_EQUALS to check is the result value is matching with expected value or not. We need to the Expected value in parameter EXP (hardcoded here). In case the value doesn’t match the expected value it will result in test case failure and message “Something wrong” will be returned.

OK, we are done with the implementation of our test class and method. Now is the time to run the Unit test.

Shall I just execute the program?? And the answer is NO!!

The direct execution with run the program and not the Unit test and nothing will happen in this case as we have actual not written anything in the “Start-of-Selection” event. So, blank screen as shown below will appear if we try to execute the program. 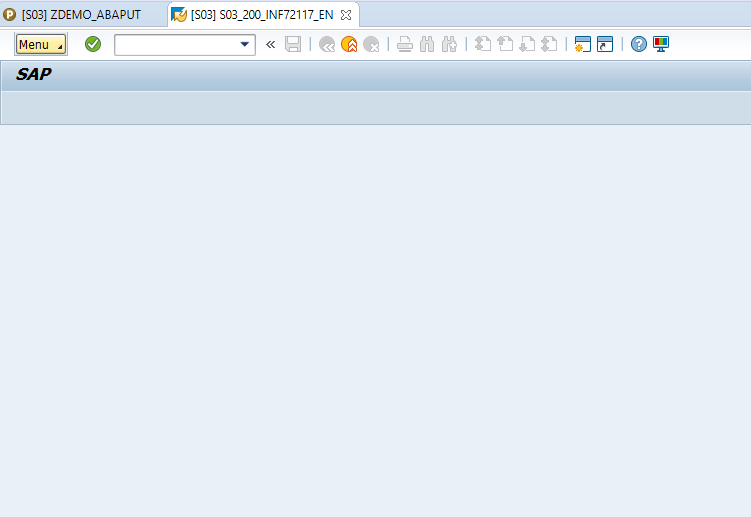 How to do it then??  The answer is, we need to run the program as ABAP unit. That will call the test class and the static method that we have implemented above. To do so, right click on the program and select Coverage As=>ABAP Unit test as shown below. 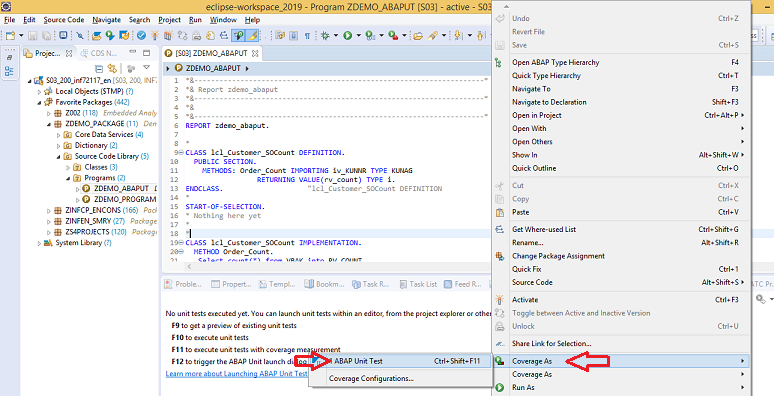 As a result, you will see the ABAP unit test is trigger and we will see details like what all unit tests passed or failed or caused warning. In this case, out test method m_count got tested and passed the result as the count matched the expected value as is shown in screen shot below. 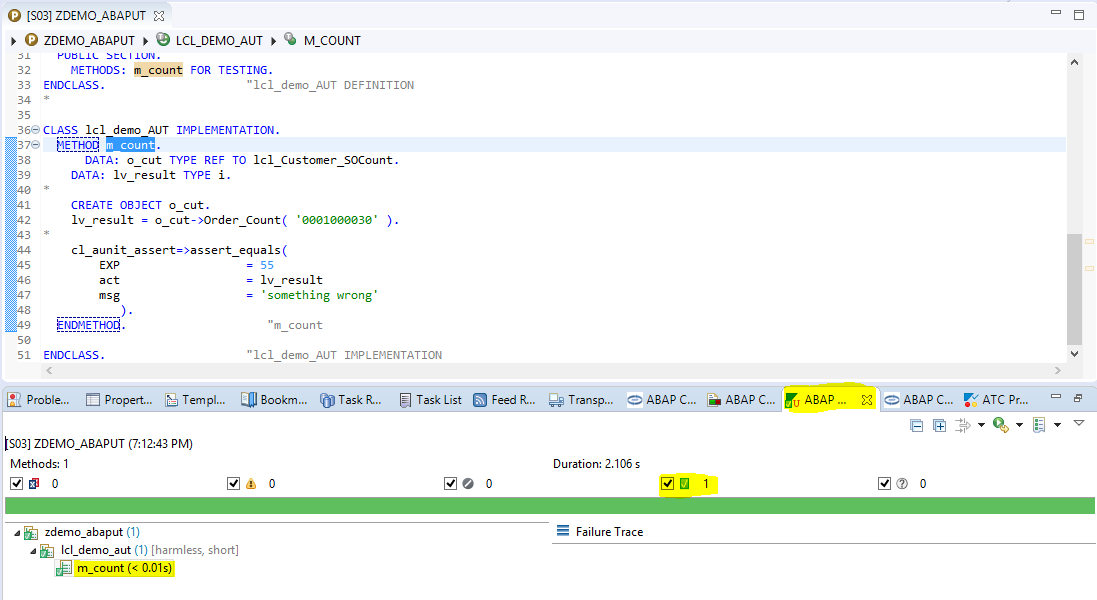 Now, let’s try the negative test case. To do so, let’s change the expected value to ‘60’ instead of 55 and see what happens. 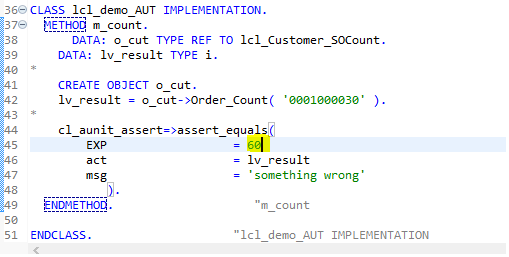 This time, the result is failed unit test as expected. We can see the message “something wrong’ in the output. Along with that result tells you that there is difference in Expected and Actual value as highlighted in screen shot below. 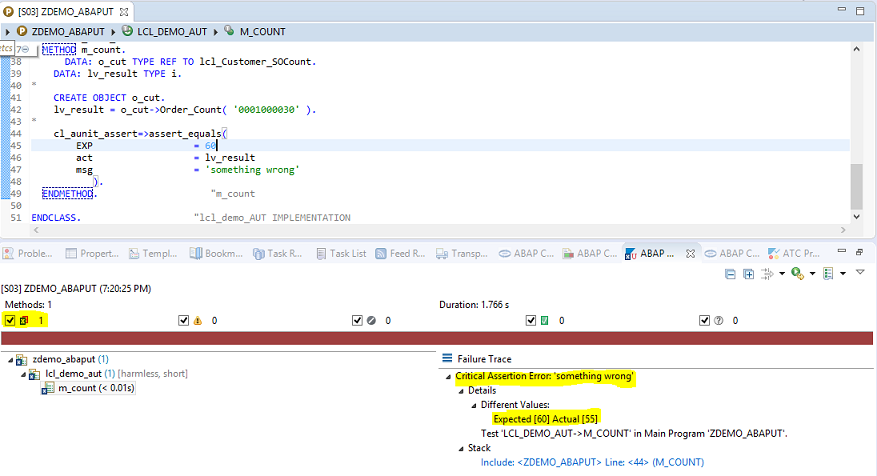 We can also check, which all pieces of code is code is covered in the ABAP Unit test in the form of code coverage. The same can be checked under “ABAP Coverage” tab as shown below. As we have only one method and we have tested it, it shows 100% covered.

We can also execute the Unit Test from SAP GUI T-Code SE38 also as is shown below. 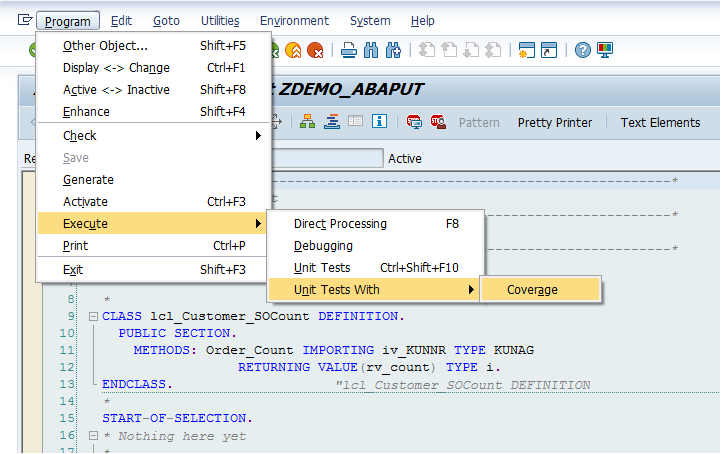 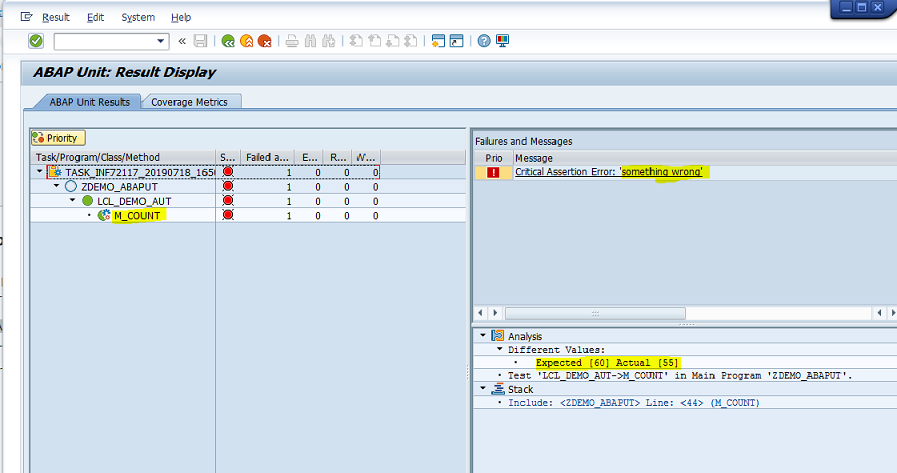 Before we wrap this topic up, let me tell you about Test Fixture.

What is this Test Fixture now?? That’s what you must be thinking now… right?

So with inclusion of Fixture methods, the changed code will be like as shown below. 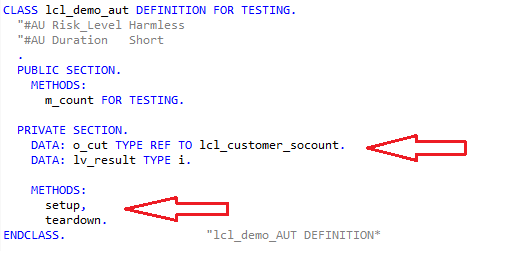 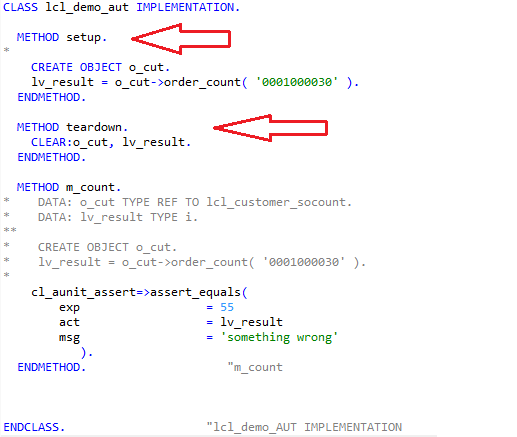 So, to summarize, we saw how we can write test methods and call the ABAP unit test to test different pieces (units) of our code. Hope you finds this useful.

Good one but how do we create unit class for method which has multiple select queries and complex logic. In real time we hardly face simple methods.

The whole concept of ABAP Unit depends on modularization of your code. We need to write out code in such packets or units at the first place itself so that we can call those units from our test class.

The ABAP Unit concepts goes well along with Test Driven Development (TDD) approach, that is we design the test case first and the write our productive code.

There are Test-Double Frameworks which can help in such situations. For Select-Statements you use the class cl_osql_test_environment.

You give a table to the class and some entries which you "create" manually. Then everytime you do a select on this table, the select will only return those entries.

Would you please give me an example or where can i find the details of it?

Thanks, Vijay bro, good to read on ABAP. I am very kin to learn this one for smartcric project. This is very useful.

Note that CL_AUNIT_ASSERT is obsolete and was superseded by class CL_ABAP_UNIT_ASSERT since ABAP 7.02 (it's more about using the right Design Pattern rather than a technical improvement, by making it FINAL). But since then, new methods are only introduced in CL_ABAP_UNIT_ASSERT. And there's a template in Eclipse ADT that one can invoke by typing "assert" + ctrl-space.

Also, your post misses a reference to the official ABAP Unit documentation.

Thanks Sandra for you inputs and feedback. Appreciate it!!

Thank you for Sharing this!!

Good one Vijay! Next up Test Seams and Test Injections.

The more blogs about unit testing and test driven development the better. Far too few people in the ABAP world make use of this.

I would note that a unit test should not actually read the database. You need a test double of some sort to mock "dependencies" e.g. database access, user input and so forth. These test doubles get created in the SETUP method.

Actual database access can be tested using the SQL test double framework, though this is only available in the latest ABAP releases.

Two years ago there was a wonderful open SAP course about unit testing and test driven development.

The most important point to be made is that if you use unit tests you are forced to make your code testable, and this makes the code better in and of itself i.e. more SOLID.

For my point of view, ABAP Unit should not used real data. All the data used in the test should be provided in the "Given" part.

For the database access, I replace the real class by a mock class.

Your doc is really good, maybe it could be nice to speak about the "Given" "When" "Then"  it helps a lot when you start Abap Unit.

Thanks Fredric for your inputs.

Wonderful to expert comments and inputs. So much to learn from

Thanks Paul for your comments and feedback.

I actually am glad to see that you read my blog and commented on that too..

motivated to to more and better..

Two years ago there was a wonderful open SAP course about unit testing and test driven development.

Funny thing: just recently I was mentioning it to someone and said it was 2-3 years ago but it was actually in March 2018. Feels like forever. 🙂 Course link: https://open.sap.com/courses/wtc1

Oh yes, and please do not mention TEST SEAMS as has been requested. They are an abomination.Production code should not know when it is being tested otherwise you end up with what is known as the "Volkswagen Effect" where code behaves one way in real life and another way during a test.

In order to use a test seam you have to change the productive code, and if you are doing that anyway, then why not change the code to make a call to an instance of a class that can be mocked?