How to Build an Intelligent Weather Chatbot with SAP Conversational AI

SAP Conversational AI is pleased to count among their users Météo France, the official service for meteorology and climatology in France. This user story will help you to figure out the steps to improve your own AI chatbot, weeks or months after its launch.
Talk with the bot here (in French only) and plan your outdoor activities after asking him the weather forecast in your city?!

It began with a simple chatbot…

The first version of MTO, the Météo France chatbot, was launched in March 2017. MTO used the power of our highly performing Natural Language Processing (NLP) technology capable of building human-like AI chatbots in any language. At this time, the initial set of features offered by the bot were relatively simple. The user could:

By the end of 2017, MTO had more than 200,000 users and it had exchanged more than 15 million messages with the users!
Météo France started working on a second version to capitalize on the experience gained in the first year in production to improve the conversational agent’s user experience. Indeed, Météo France observed that some functionality could be improved.

Let’s find out how they leveraged the capabilities of our bot-building platform to overcome their challenges!

1. Use the Bot Builder to improve the chatbot UI

The powerful and visual Bot Builder from SAP Conversational AI-enabled Météo France to provide a great user experience by fine-tuning their conversations.

In the first version, the weather layout was clear, visual, and concise but only captured the temperatures of the day along with a pictogram.
In the second version, Météo France added some new capabilities. Users could now: 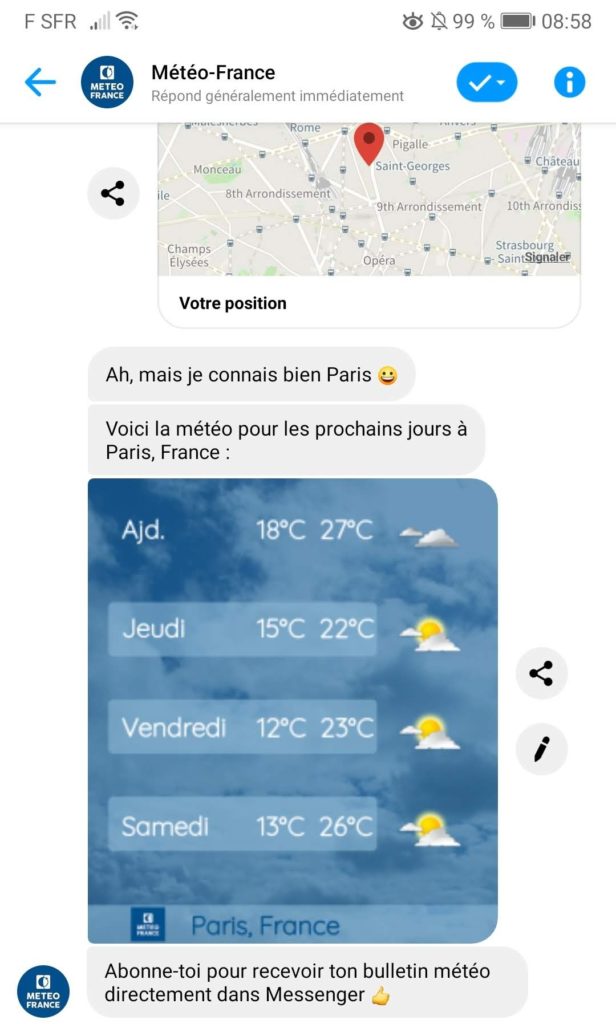 To overcome the constraints of Facebook Messenger and offer the most visually pleasing experience possible, they generated an image to present the weather for the next 3 days and the next 6 hours rather than using a carousel.

2. Leverage the power of your user data with Bot Analytics

Météo France needed to understand how users were talking to the chatbot and leverage user data to improve the dataset performance.
That’s why the Bot Analytics feature of the SAP Conversational AI’s platform was critical.

With the first version, the chatbot was limited to the understanding of an intention (“ask the weather“) and two entities (a place and a date). Based on the analysis of logs and usage metrics, they refined the training of the chatbot by correcting when user sentences are misunderstood. It has been enhanced with the following specific intentions: 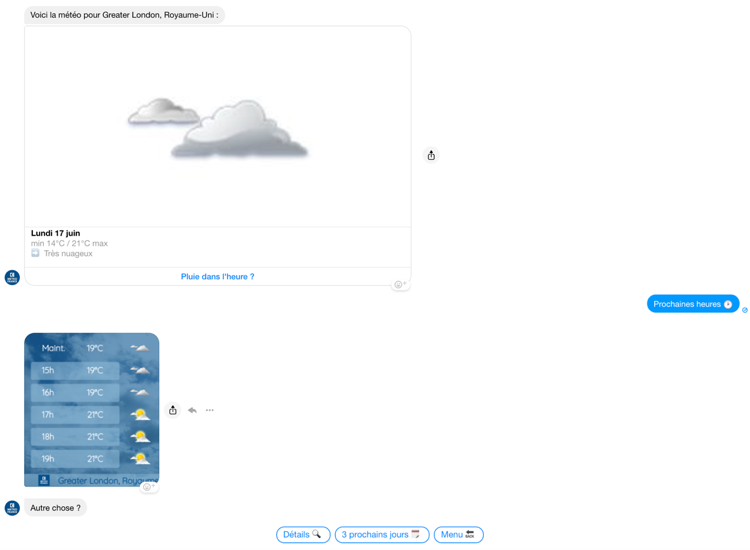 The chatbot is now slated to show small talk intentions in response to messages sent regularly by users.
Who would have thought that so many people are so well educated that they even thank a robot after talking to him?

3. Send weather reports to users according to their preferences

A lot of people already have a weather app installed natively on their smartphones. In order to change their habits and make sure they always keep interacting with the bot, MTO now allows users to receive weather reports directly through Facebook Messenger.
They can then modify their preferences (frequency, time, city) very easily and whenever they want. Thanks to a list interface!
An improved user onboarding has also enhanced the user experience. 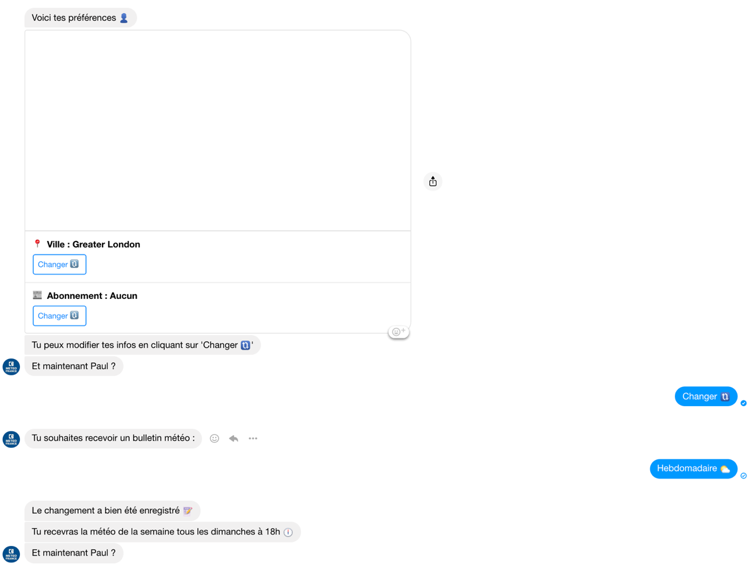 We are now entering a new era: people no longer have to wait for the weather forecast in their TVs. They receive customized weather forecasts directly on their smartphone, whenever they want!

The future is bright for MTO!

The many recent changes have revived the interest of users in their chatbot. MTO now has more than 650,000 users and 70 million messages exchanged in total! But Météo France has room for improvement, as they have come up with many optimization ideas for their conversational interface.

For example, we can definitely imagine that the bot should be able to understand the natural language requests with the same granularity as the information provided by the Météo France API.

The team is also thinking about translating their chatbot into English and connecting it to their other social media platforms such as Twitter. They’ll be able to better reach out to their 100,000 followers base, using the bot connector capability of SAP Conversational AI.

Moreover, the integration of MTO on their website would be the opportunity to reach more people who are looking for national and local weather forecasts.

We’re proud to count Météo France among our users!

If you have questions about the platform, feel free to address them on SAP Answers, where you’ll get replies from our team or our strong community of bot builders around the world!

If you have a chatbot project in mind, please send an email to our team. They’ll be happy to get back to you.