Not enough JMS queues for Exactly Once? Share them between IFlows!

For those coming from a PI background, one of the noticable feature missing on CPI is the capability to implement asynchronous integration with Exactly Once (EO) Quality of Service, and the corresponding ability to reprocess failed messages.

The addition of the JMS adapter (which only works on internal CPI JMS queues) aims to fill this gap by providing the capability to decouple the inbound and outbound message processing of an asynchronous scenario using an internal JMS queue. Once a message is persisted into the JMS queue from the inbound IFlow, it will then be picked up from the JMS queue by the outbound IFlow. Any errors during outbound processing will result in the message being retried again automatically according to the retry setting (interval, exponential backoff). An administrator/developer can also manually retry the message from the JMS queue using Operations view in WebUI. This approach is described in Configure Asynchronous Messaging with Retry Using JMS Adapter.

Running Out of Queues?

One of the delightful aspect of working with CPI is the flexible modeling environment that is powered by the underlying Apache Camel framework. This combined with the ability to connect separate IFlows using the ProcessDirect adapter really opens up the possibility to come up with endless creative designs to handle integration scenarios – limited only by one’s imagination.

As described in Point 1 of my tips for CPI development, IFlows can be segregated such that common functionalities can be implemented as separate IFlows and invoked using the ProcessDirect adapter. The use cases are limitless, and this blog post covers how it can be utilised from an error handling perspective.

If we were to implement a 1-Interface-1-Queue design, we will run out of the “expensive” JMS queues quickly.

The core idea of this blog post is to implement a common “error handling” IFlow which utilises a single JMS queue for EO/reprocessing functionality, which can be shared with many IFlows via ProcessDirect adapter invocation.

Following is the outline of the design approach and processing sequence.

The reason for splitting the scenario to Sender Flow and Target Flow is so that there is an entry point for the error handler IFlow to send the retry messages to.

For the sake of simplicity, the scenario will involve a sender HTTP channel, which triggers a Groovy script logic. Below are the details of each IFlow object.

The sender IFlow decouples the sender channel from the rest of the processing required for the scenario. Ideally, no other step (or minimal steps) are introduced here so that there is no likelihood of an error occurring at this point. The message is sent to the next IFlow via ProcessDirect receiver channel.

This setup is analogous to a Sender Communication Channel in PI.

The target IFlow contains all the processing logic and steps required for the integration scenario. In this example, it is just a single Groovy script.

The entry point to this IFlow is via a ProcessDirect endpoint – whereby it could receive an initial message from the sender IFlow or a retry message from the error handler IFlow (more details below). 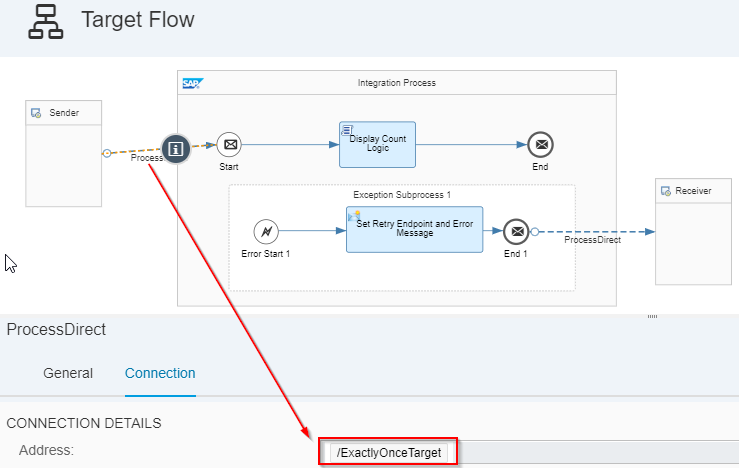 Message headers can cross IFlows using ProcessDirect adapter, so this allows the subsequent error handler IFlow to know which endpoint to retry the message.

Another important aspect of the design is the following headers need to be allowed in the IFlow configuration. These are headers transferred from the error handler flow when it is retrying a message (more details below).

The error handler IFlow is the core of the design. It consists of two integration processes:-

Following are the details of the key parts of the IFlow:-

Point 1 – ProcessDirect entry endpoint to this error handler. Allows 1/many IFlows to send messages with exception to enable EO retry.

Point 2 – Validates that the RetryEndpoint and ErrorMessage headers are passed by the calling IFlow to ensure that error handling can be processed correctly.

Point 3 – Checks message retry count against the configured max retry limit. If the limit is reached, then message is set to Escalated status and no further processing is done.

Point 5 – Stores the initial message into the JMS queue.

Point 6 – If the message failed during retry, it is not stored again into the JMS queue to prevent duplicate entries. Instead it is forced to status ‘FAILED’ via a Groovy script, this will cause the existing message that was stored in JMS to be rescheduled for a next retry.

Point 7 – The message will be retried from the JMS queue based on the configured settings in the JMS sender channel. 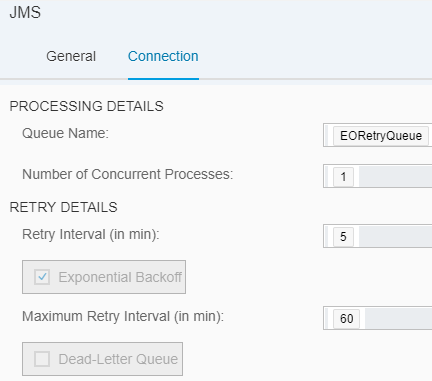 Point 8 – Header RetryMode is set during retry, so that it can be differentiated at Point 4 above should the message fail again during retry.

Point 9 – Message is retried by sending it back to the target IFlow via the dynamically populated RetryEndpoint header.

Additionally, the following headers are allowed in the IFlow configuration. This allows transfer of details between the target IFlow and the error handler. SAPJMSRetries is an internal header that is automatically populated by the JMS sender channel based on the current retry count of the message.

Note: If the message was successfully processed during a retry, it will change to status ‘COMPLETED’ and will not reenter this error handler IFlow. The message will be removed from the JMS queue upon such successful retry.

To observe the runtime behavior of this design, the Groovy script in Target Flow is designed such that it will raise an exception if the value in the input payload is not an integer. Once the integration scenario is invoked with a non-integer value, the exception will be triggered.

With trace enabled, we see the message flow following the exception route in Target Flow, and the headers ErrorMessage and RetryEndpoint populated.

In the error handler, the initial message is stored in the JMS queue.

It is then picked up from JMS, and sent for retry via the RetryEndpoint header.

If it fails again in Target Flow, it reenters the error handler, but does not get stored again in the JMS queue.

The automatic retry process repeats itself until the message is successful or the retry limit is reached. Note that if ‘Exponential Backoff’ is set, then the retry interval is doubled after each retry (as shown below).

The reference development objects used in this blog post are available in the following GitHub repository.

The error handler IFlow (Common JMS Exactly Once Error Handler) is ready to use as-is, and provides the following externalised parameters for further configuration. 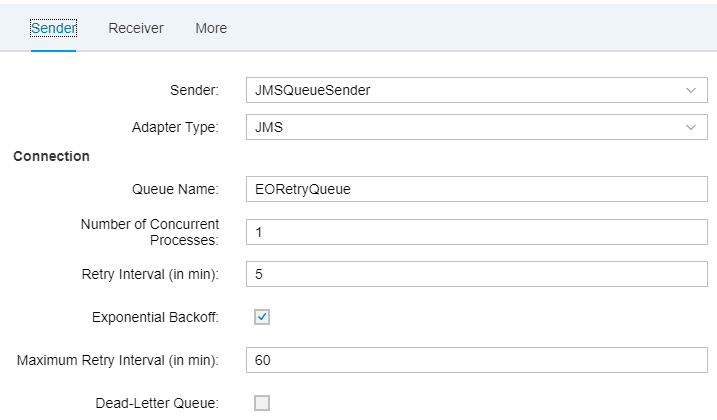 With the design described in this blog post, we can significantly improve the error handling aspects of asynchronous interfaces in CPI. This design is by no means “set in stone”, but meant to showcase how flexible Camel-based modeling and ProcessDirect adapter come together to allow us to design creative solutions to integration requirements.

The approach can even be further enhanced in the following manner:-

Is the processing of messages from JMS queue is serialized?.

thanks for sharing that approach, definitely looks interesting for those still on the Neo environment with limited / cost-intensive JMS queues.

But don't you think sharing of JMS queues between interfaces brings additional risk for interface operations? (because you cannot stop and retry interfaces/queues independently) How do you handle that in productive scenarios?

This approach primarily uses sharing of JMS queues for error handling. Only when an exception occurs, it is sent to the JMS queue for automatic retries. Additionally, we group different sets of interfaces that belong together and they share the same queue/handler. So it's not a single queue/handler for every single interface.