In my last blog post I’ve explained how to create a ticket for a service request in SAP Cloud for Customer within an SAP Leonardo IoT action.

Today I would like to show how to invoke APIs from different endpoints while using the SAP Leonardo IoT actions focusing on the fact that it’s possible to invoke more than one action per event.

Let’s assume that your Thing is already configured and SAP Leonardo IoT is currently ingesting data correctly for your asset.

The SAP Cloud Platform Internet of Things device has already been onboarded and is currently communicating with the platform. It will be given just a short overview on the device modelling.

The scenario I’d like to explain in this first use case is a Rule that trigger an Action to send a command to a physical end-device.

The command is sent to the end-device by using the SAP Cloud Platform Internet of Thing APIs.

Our device is a vital part of an equipment in the railway environment that is called in short git; it is in redundancy with at least one replica, and is able to monitor his own status. In case of failure certain actions must be invoked for security reasons.

In particular our device is currently sending as measurement to SAP Cloud Platform IoT Service and SAP Leonardo IoT a counter with the number of errors and problems detected from the startup of the physical device. If this number is higher than a fixed threshold, we would like to invoke one of the available device commands (for example the reboot command or the stop). 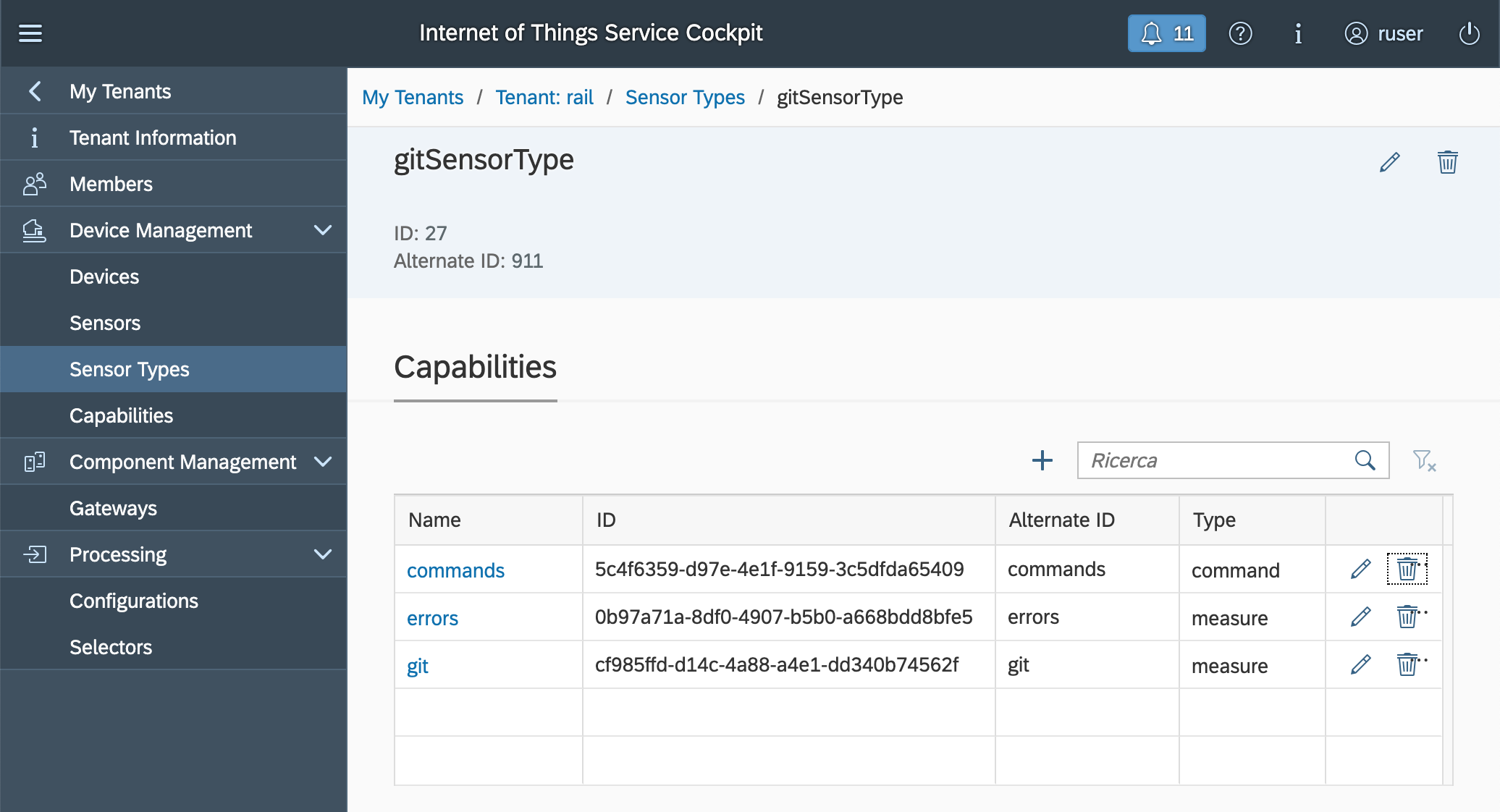 The device provisioned into the SAP Cloud Platform Internet of Things instance have only one Sensor. His sensor is described by the Sensor Type named gitSensorType that is composed of the following Capabilities:

In particular the command has 3 Properties:

All the properties are of type Boolean and are evaluated with a prioritization schema. If more than one is set to true only the one with the higher priority is computed and his related command invoked. 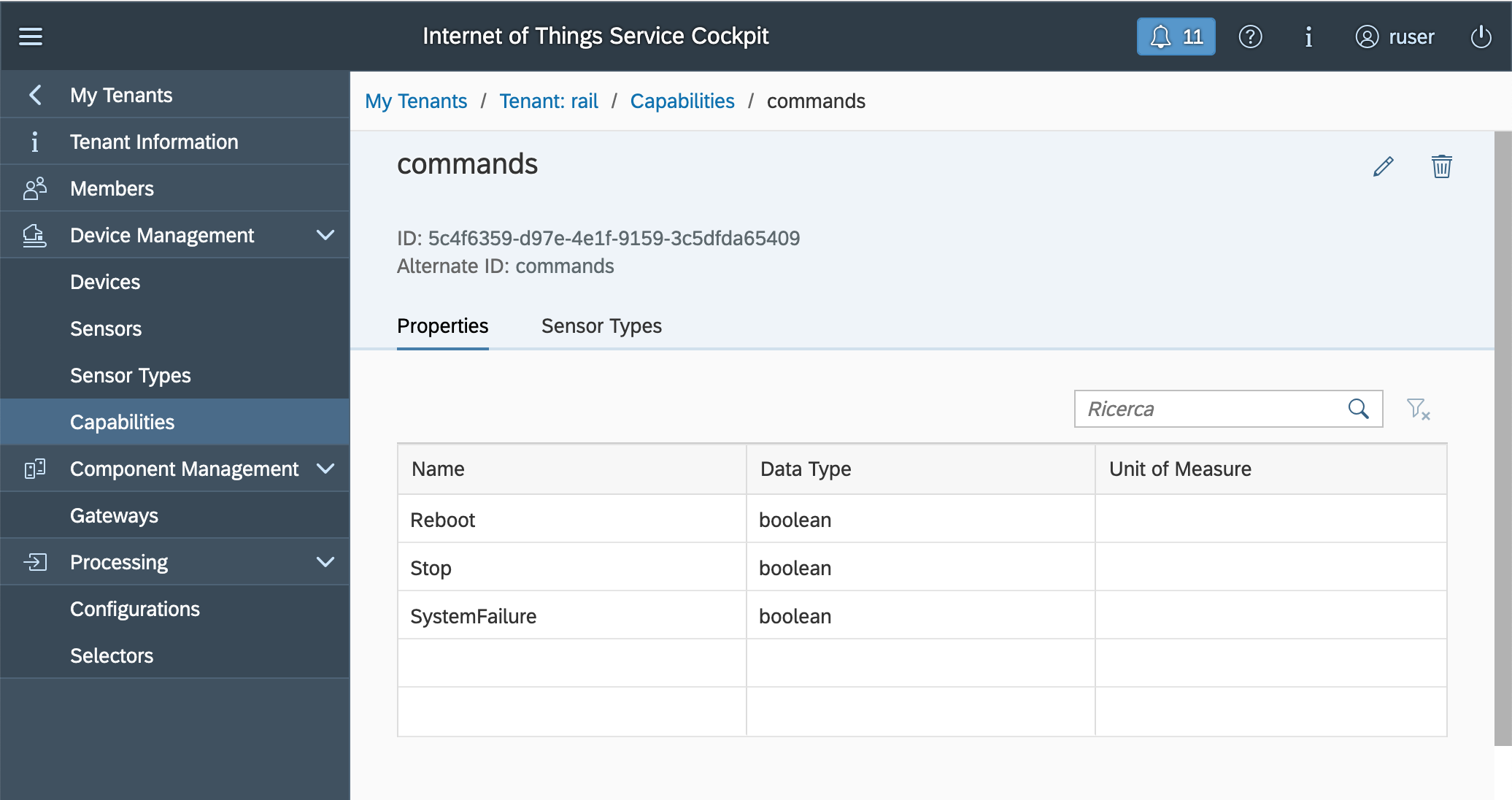 In the next part, SAP Leonardo IoT uses the SAP Cloud Platform Cockpit Destinations to invoke the HTTP calls. It means that a new destination to connect the Action with SAP Cloud Platform Internet of Things Device Management module needs to be created, to issue correctly the command.

To complete this step, you need to open into the Cloud Platform cockpit, your Cloud Foundry subaccount, then press “Destination” in the menu on the left, under “Connections” and create a new Connection with the following details:

Note: Ensure that in the URL the deviceId is used and not the deviceAlternateId, otherwise the command will not be invoked correctly.

In this step I’ll show you how to configure the Rule Context and the Rule.

First of all, open the Rule Contexts tile of your SAP Leonardo IoT Fiori launchpad and create a new Rule Context linked to the Thing Type and Properties which you have already onboarded before (not explained in this blog post, please refer to the official tutorial). 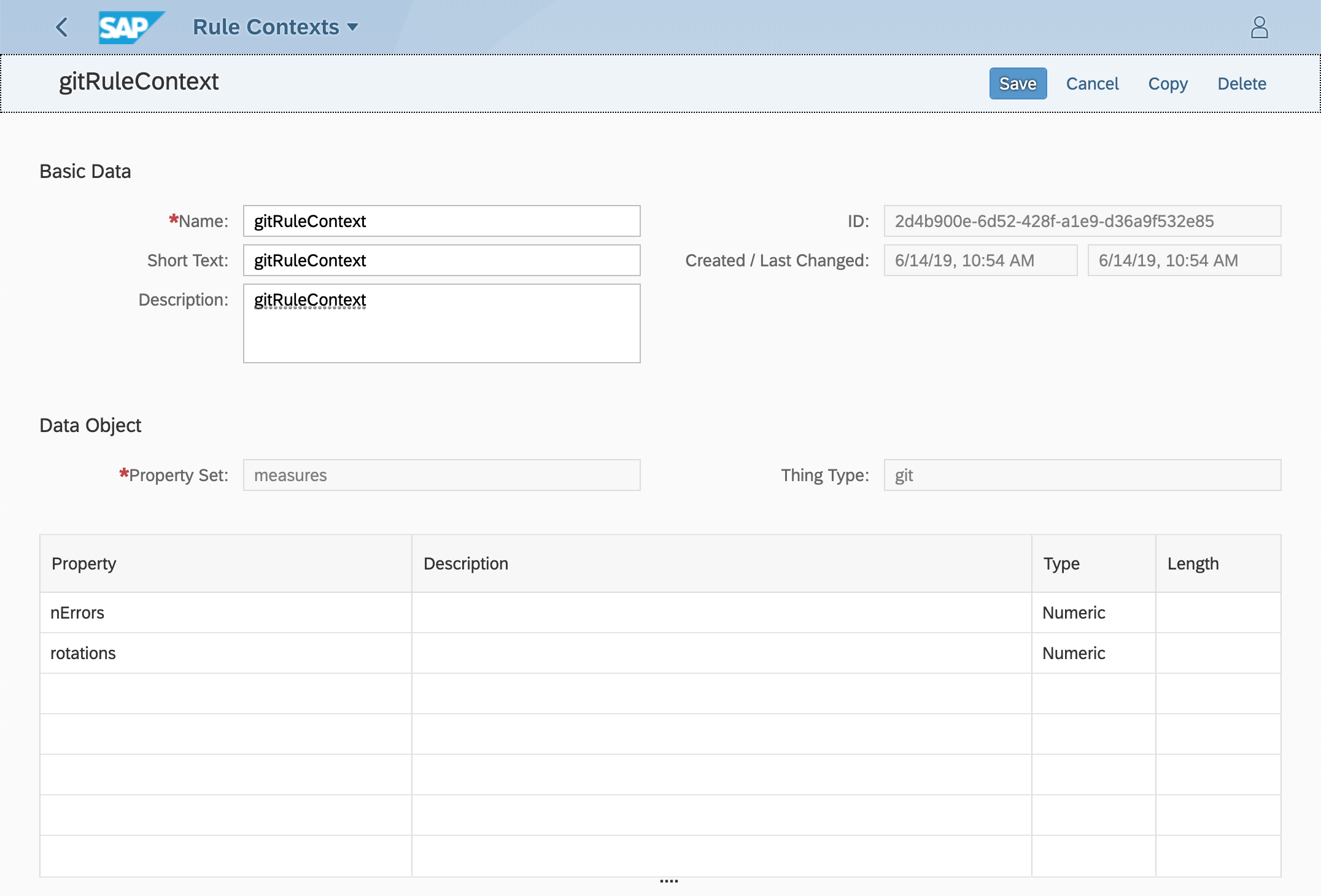 Now we can proceed with Rule modelling: open the Rules tile in the Fiori launchpad and create a New Rule of type “Streaming”.

After the specification of a rule name and, optionally a description, navigate the tab editor and as Rule Context select the one created in the step before, to enable the usage of the property nErrors in the condition of your rule. 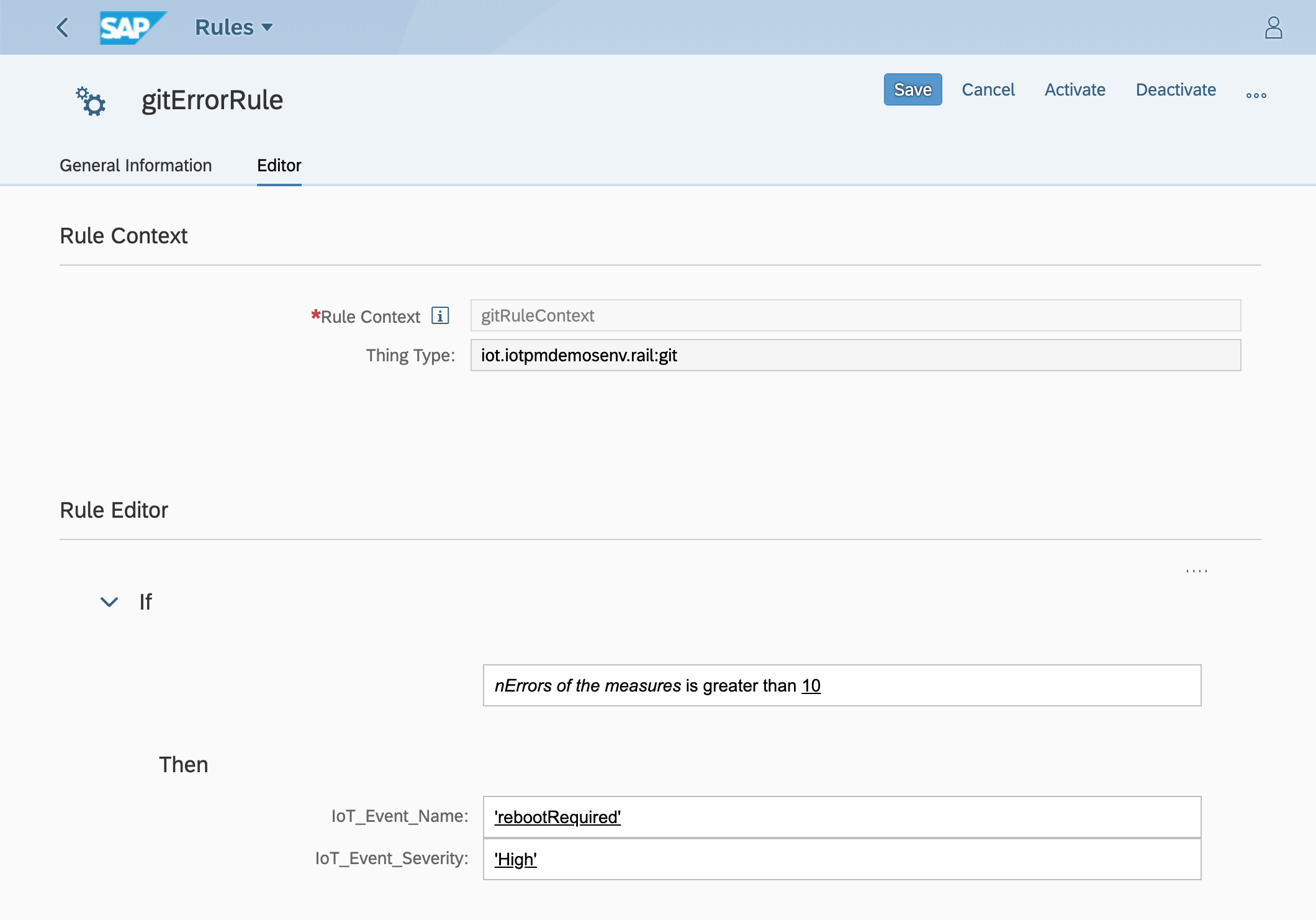 The purpose of the rule is to notify when a certain number of errors have been detected (10 is the threshold).

In fact the condition “nErrors of the measures is greater than 10” will raise an event called “rebootRequired” that will be used to fire action in the next step.

After the creation press the Activate button to start the scheduling of the rule.

This action is using the HTTP cloud destination created before to invoke the POST API to send a command to the device. 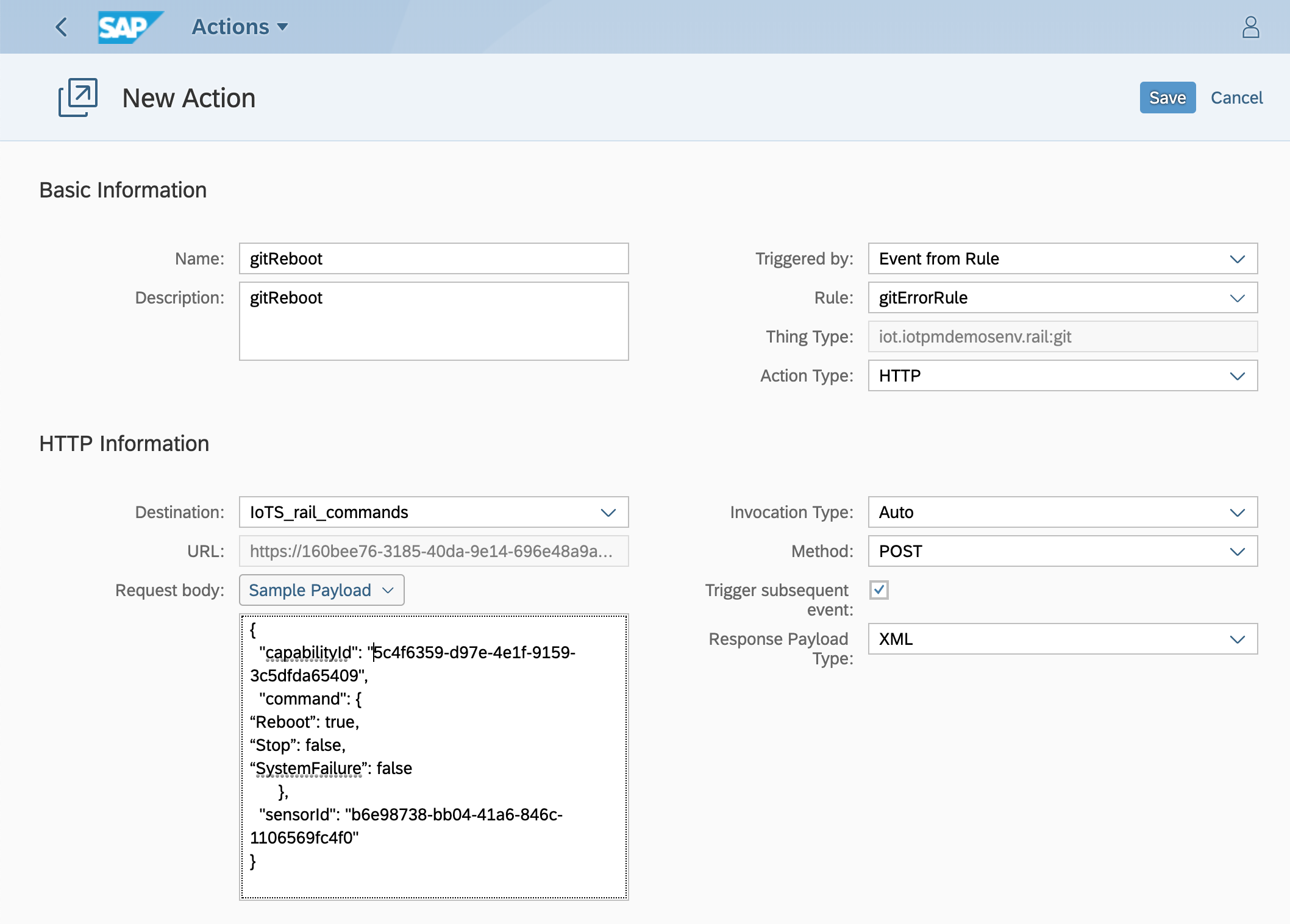 The parameters of the Action are:

The capabilityId is the id (and not the alternateId) of the capability commands; you can discover it directly with the Internet of Things Cockpit.

Similarly, you have to detect the sensorId of the sensor git.

Our device is going to consume the command specified into the payload and the native reboot will be invoked.

Let’s assume that the status of the device is logged with a serial port, that means we will have a feedback of the device status and the executed operations.

Unfortunately in the example we are not using a real device, but a simulator, so we can simulate a certain numbers of errors , that will cause an increment of the nErrors value and all the consumed commands are logged directly into a file, like for the real device but without using any serial port.

After we have simulated 11 anomalies the nErrors counter is over the threshold. It means that the action has been triggered and the reboot command invoked.

SAP Leonardo IoT Rules and Actions are in a 1:n ratio. It means that it’s possible to invoke more than one action with just one rule.

In this second part, as extension of the first use case of this blog post, the same rule created in the first part will also call a second action which invokes an API of SAP Leonardo IoT to create a Custom Event.

The device is in a critical status, too many errors have been generated: we would like to reboot it and save a custom SAP Leonardo IoT event that collect several non-standard properties.

The first part has already been implemented in the use case 1, let’s now focus on the creation of the custom event.

First of all there is the creation of a custom event type. Since it’s an operation that is executed just one time, in this post we are using Postman to create it. Any other rest client could be used instead (for example curl).

To proceed with the next steps you need to discover what is you oData event endpoint and your oAuth2 authentication details.

To discover them go to SAP Cloud Platform Cockpit and open the Cloud Foundry subaccount; go to Spaces and navigate the space where the instance of SAP Leonardo IoT has been created during the onboarding phase.

Click Service Instances and open the instance with Service name “iotae” and then Service Keys. In the JSON of your keys copy the address of “events-sap” that will be used later to invoke the event type creation (e.g.: “events-sap”: https://events-sap.cfapps.eu10.hana.ondemand.com)

Now copy the oAuth2 details that are in the uua subpart; in particular we need to use the following fields:

Open Postman and create a new call with type POST.

In the authorization tab select oAuth2 compile the form to Get New Access Token. 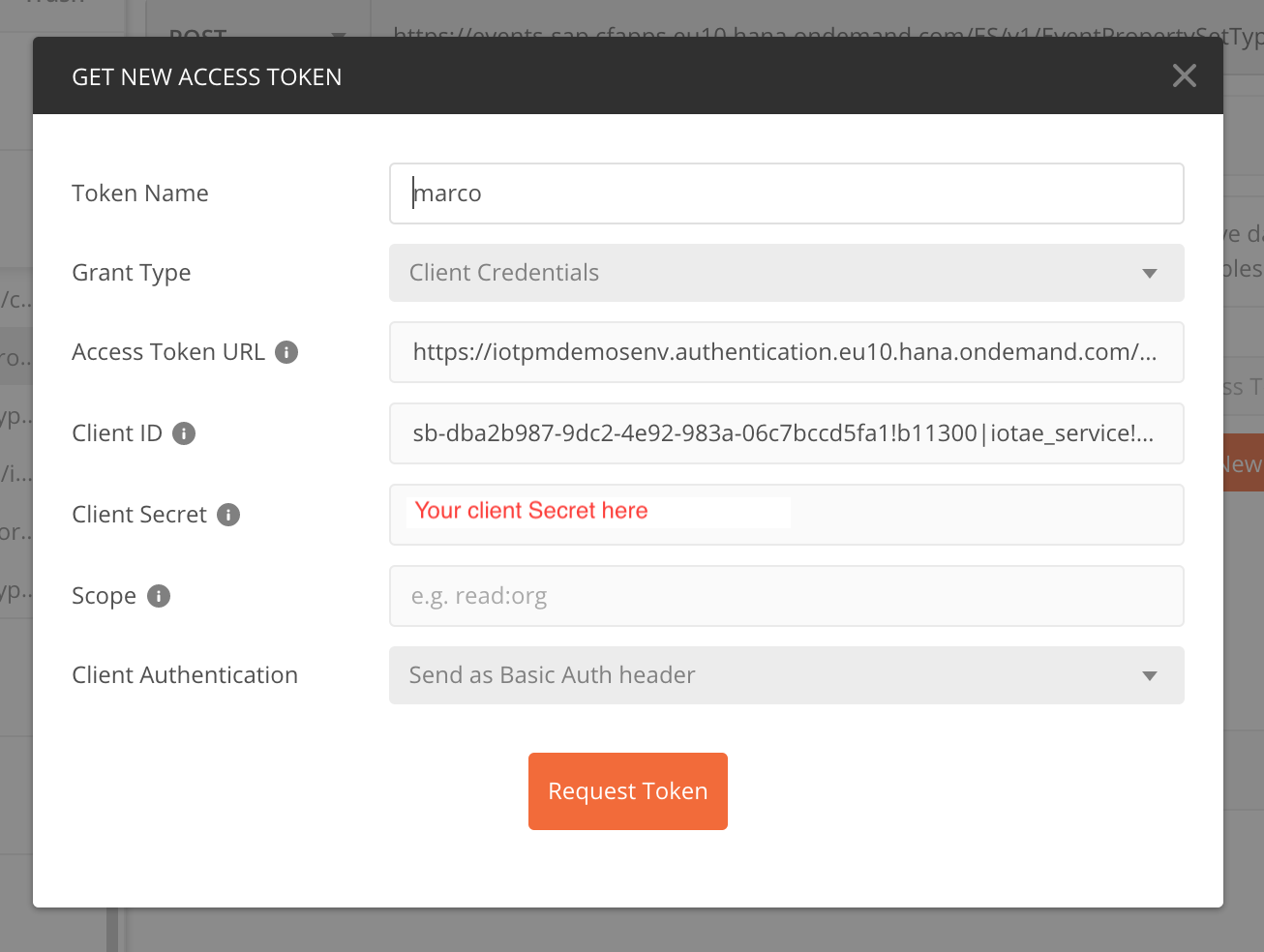 The access token url is the url taken from your SAP Cloud Platform Cockpit by adding at the end of the address /oauth/token (e.g: https://iotpmdemosenv.authentication.eu10.hana.ondemand.com/oauth/token)

In the header section of the request add a new header with:

Now let’s compile the body of the POST and the address:

Press Send to create it. An HTTP status 201 of the response identify a success. 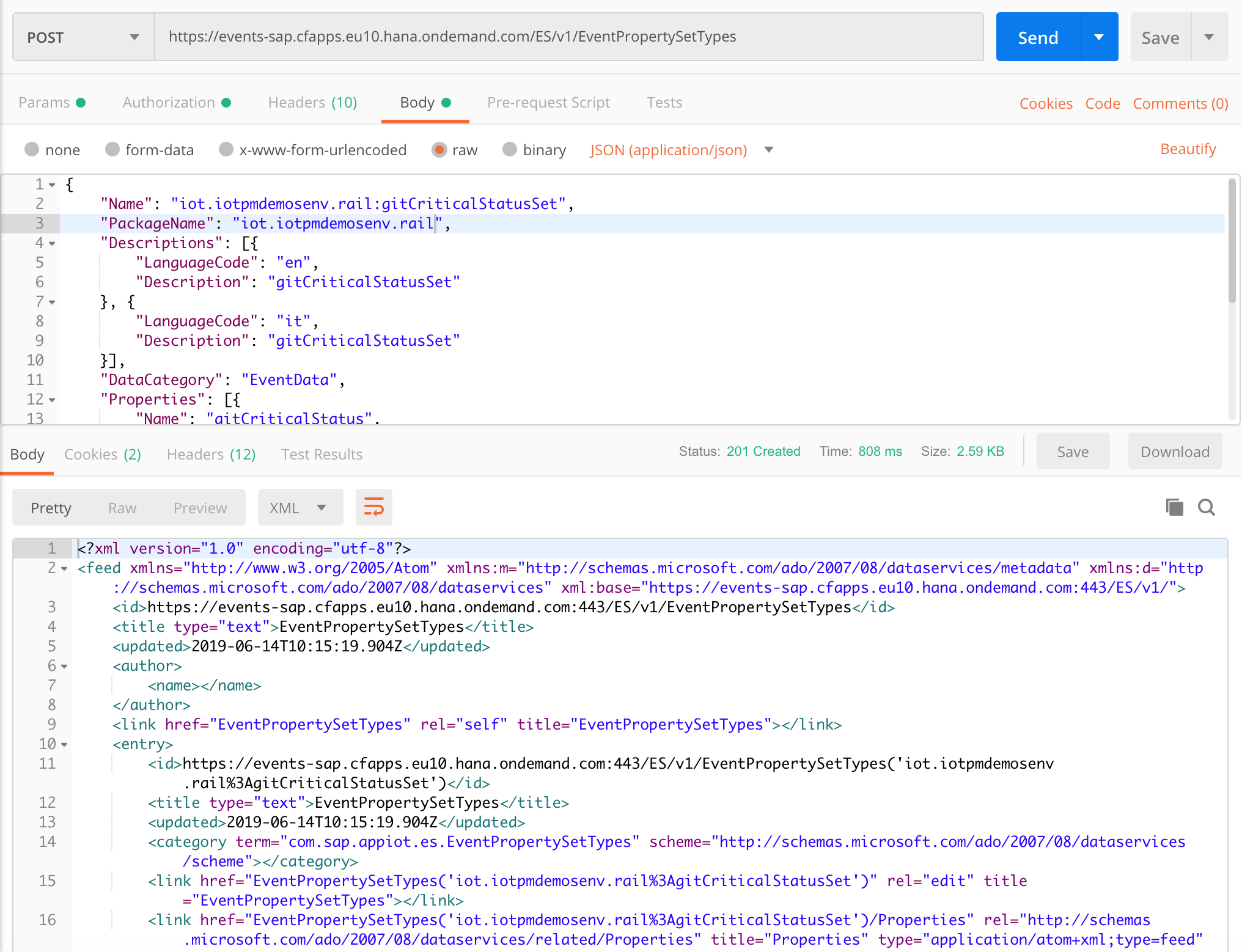 Use the same oAuth token and headers of the step before, and compile the POST method with the following details:

Press Send to create it. An HTTP status 201 of the response identify a success. 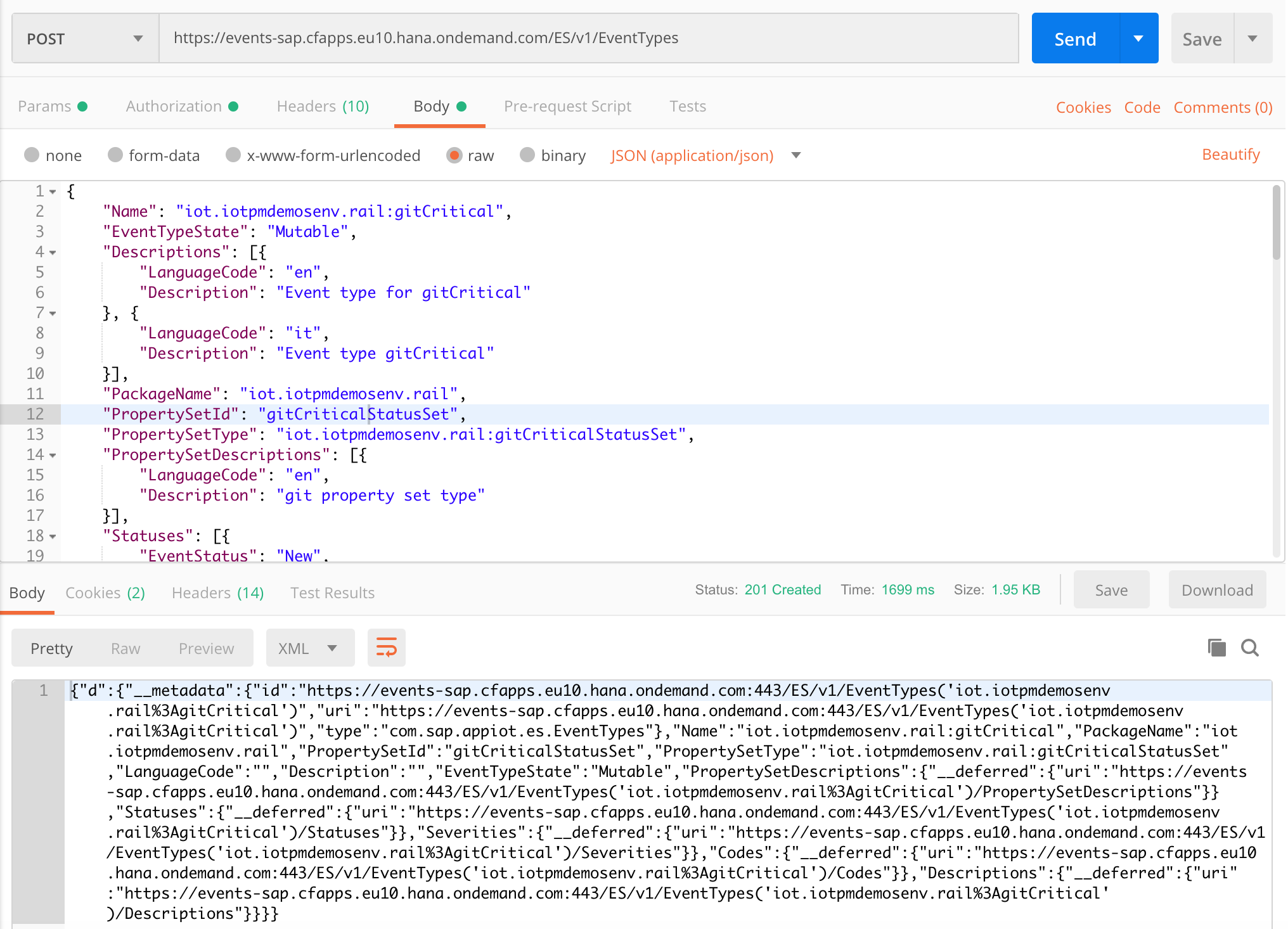 In order to invoke an API of SAP Leonardo IoT you need to create a new connection in SAP Cloud Cockpit Destinations with the following details:

The parameters of the Action are:

To verify the behavior we have to force again the triggering of the Rule.

First of all we can verify that the action of the use case 1 is still executed; as expected the log identify again that a reboot have been invoked.

Open again Postman and create a GET Method.

Use the same oAuth token and headers used for the EventType creation and use the following address: <“event-sap” endpoint>/ES/EventType/<event type name>/v1/Events (the address for our example is: https://events-sap.cfapps.eu10.hana.ondemand.com/ES/EventType/iot.iotpmdemosenv.rail:gitCritical/v1/Events)

In case of success, the result of the HTTP request is 200, and in the body of the response you can verify the presence of one Event, created by the action. 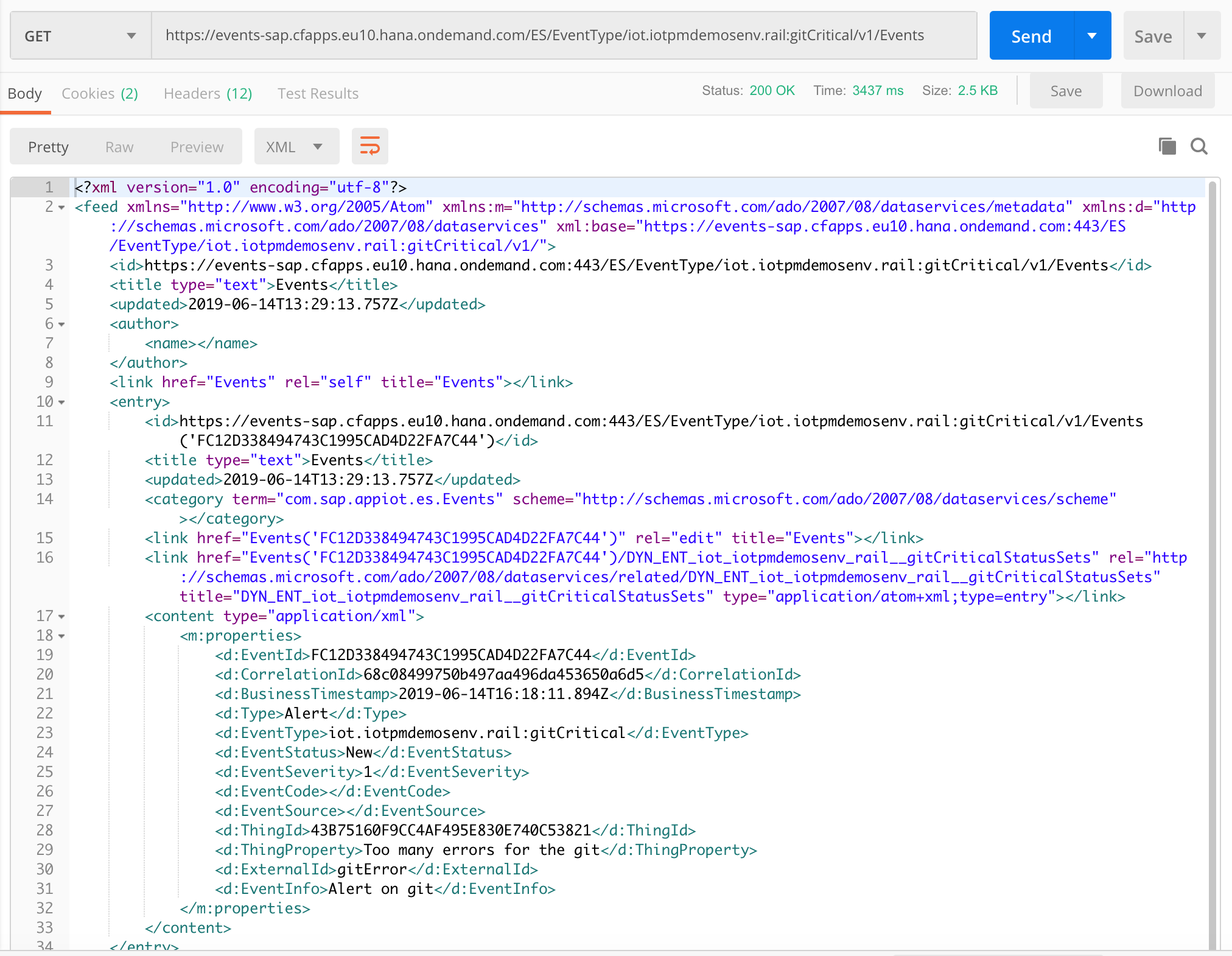 In this blog post I’ve shown how to invoke more than one action and both the actions where invoking an SAP services. In a similar way it’s possible to invoke also 3rd party endpoints.

This really nice blog …!! Make very ease to trigger Action based on rule .

Suppose use case where i have Alexa send Instruction to device ( Robot as device in IoT service Cockpit  ) – Based on Alexa instruction robot change his position . If i am not wrong this be the case to invoke also 3rd party endpoints to send command to device using Rule and action .

Appreciate how this can integrate/Configure in SAP IoT Leonardo with all step involoved – Alexa send Instruction to device ( Robot as device in IoT service Cockpit  ) – Based on Alexa instruction robot change his position .

I don't have a deep knowledge of Alexa and we might extend a little bit the analysis of the scenario to identify better what is the final goal and how would you like to achieve it.

In particular, what are the steps that you would like to execute and who should be the actor?

By the way, let me try to figure two possible scenarios that can fit with your use case.

If you would like to invoke within the action an endpoint exposed by Alexa (or any other endpoint), you need to configure it in the cloud destination, like I've done here in my example:

Then you just have to use this endpoint in the action (with the expected payload).

In case you need to downlink the command from Alexa to the end device (connected to SCP Internet of Things) by using the Internets of Things capabilities, I suggest to have a look into the official documentation:

that means in short:

In case the situation is different and you would like to use Alexa to downlink commands to a device connected to SCP Internet of Things, your use case perfectly fits with the "use case 1". It basically means that your measurements are forwarded by Alexa into the data ingestion pipeline, and the action should trigger the reboot of the robot directly within an action.

To downlink the command you just have to follow what is specified above.

In case the scenario is different, please add all the missing information, then we can figure it out how to apply it in your scenario.

We cannot find the HTTP action type in the Action Tab. Is it removed by SAP?

Hi, thanks for your feedback.

The current action is "Service Integration".

Please let me know if it helps!