SAP Inside Track at Wroclaw

Couple of weeks ago, I attended SAP Inside Track Wroclaw 2019. I was the one who traveled the longest distance for the event. It was full of great people, technical discussions/presentations. Totally worth the effort 🙂 My impressions and overall experience are here?

Being one of the organizers of the SAP Inside Track Istanbul, I know how much fun spending time with other community members is. Since 2011 I’ve been trying to join all Inside Track events in Turkey. I’ve helped many to happen. I’ve had sessions in many of them. But before 2016 I had never attended one abroad.

There was this special SAP Inside Track Frankfurt event which was jointly organized with the first UI5con at 2016. A fantastic opportunity ? I know what to do when I see one. So I went there, had so much fun, learned tons of stuff and met lots of brilliant people! One of the brilliant people I’ve met there was Witalij Rudnicki . This way I’ve heard about sitWRO from him and added it into my bucket list. I also asked him if he was up for a codejam in Istanbul, and after that he came to Istanbul at least 3 times. This is the tweet of ui5con, you may spot some familiar faces.

So finally this year, I had time and energy to arrange a trip to Wroclaw. There was no direct flight to Wroclaw from Istanbul, also this was going to be my first time in Poland so It took a little while for me to get everything ready. Then I checked the agenda. There were two codejams just before the SITWro. One of them is about Cloud Application Programming Model ? I couldn’t think of a better bonus for this trip! And guess who are the instructors! DJ Adams and Maximilian Streifeneder . 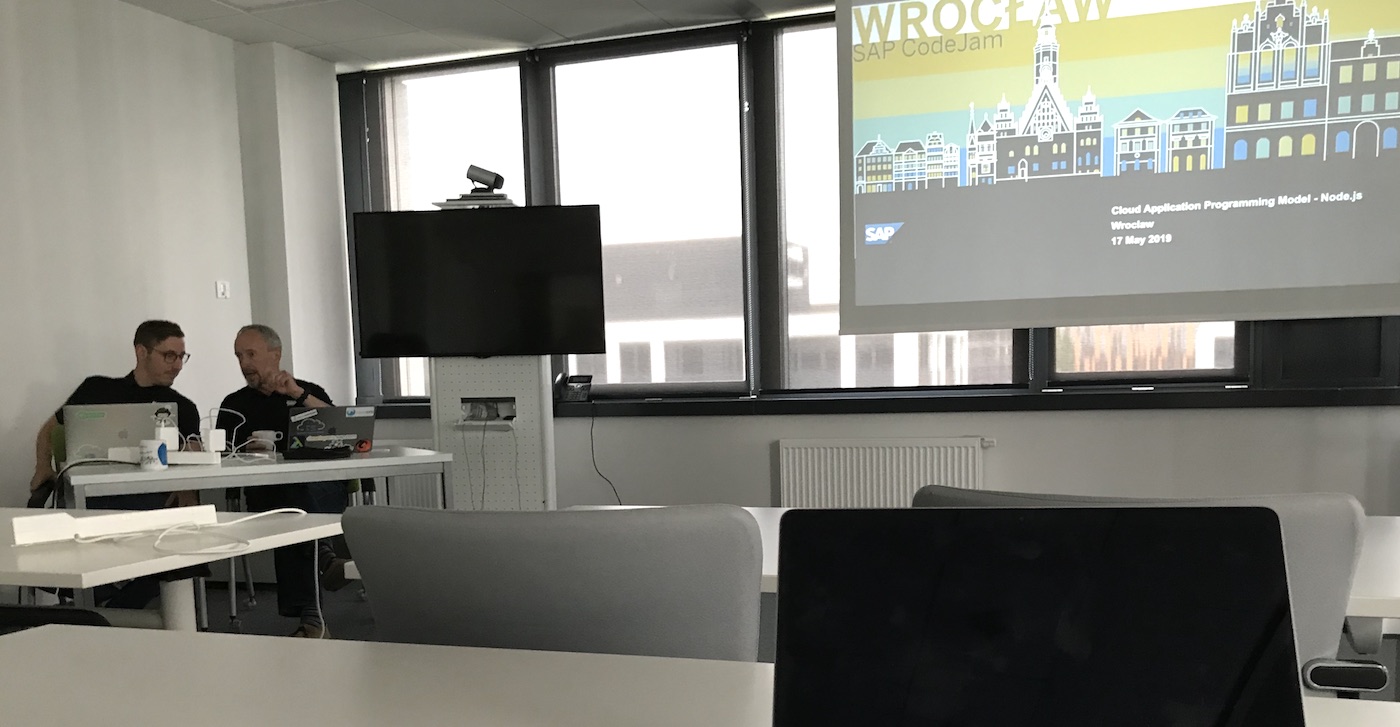 Actually, I’ve been whining around for weeks about not having time to watch all live stream series from DJ Adams on twitch. Even couldn’t catch up the replays 🙁 Series are titled “Hands-on SAP dev with qmacro” and happens every week on Fridays. Highly recommended! Topics are ? and covers lots of the things I want to learn (and 90% of other developers). DJ Adams is more into series rather than a single contribution which is awesome. And I thought if he was a screenwriter, he would more likely to create TV series rather than a movie ?The IT Crowd maybe ? Or The Hitchhiker’s Guide to the Galaxy ? 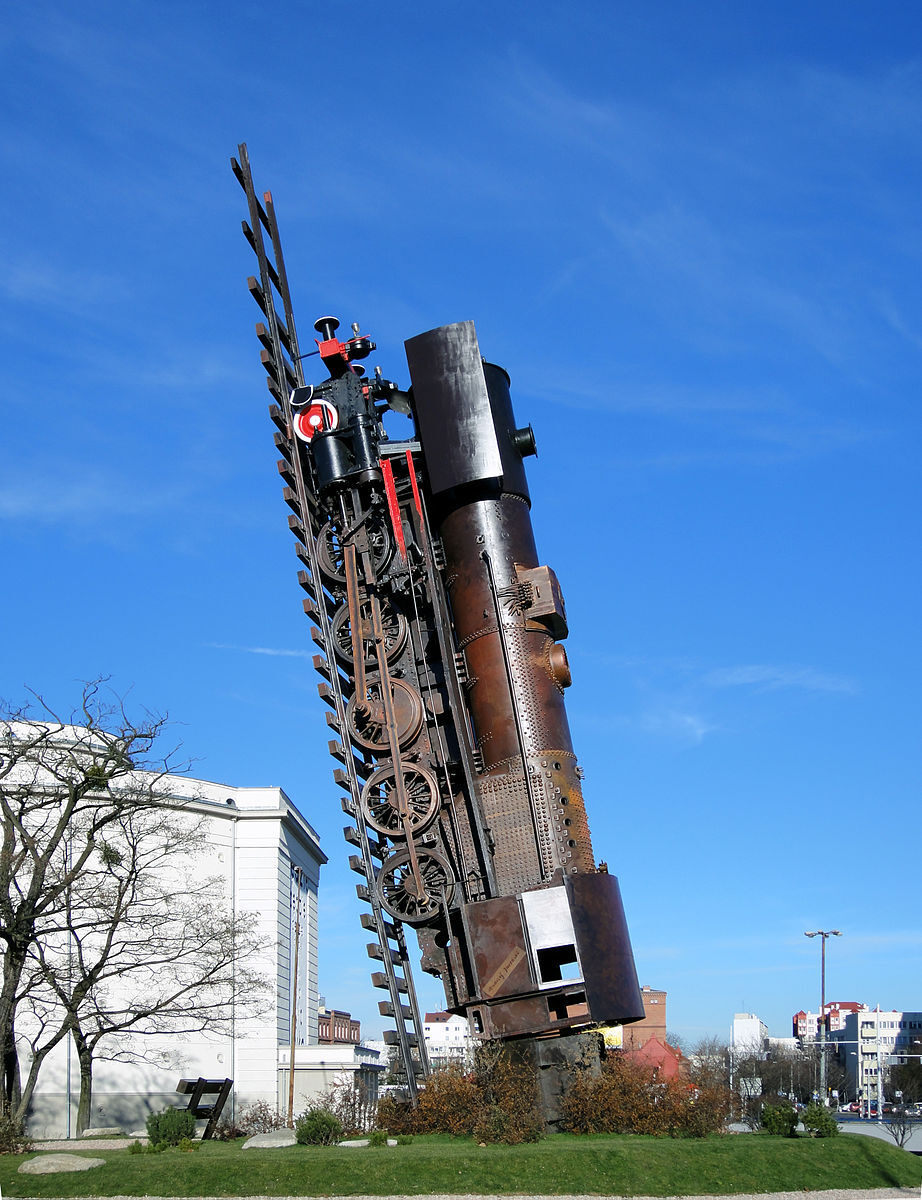 I used this to go to CodeJam, Air Train 🙂 (The Train to Heaven)

It was Friday and DJ was planning to stream the codejam as part of the series. There was bad news for the people waiting for the stream. Because of the connection problems, there was no live stream. But it was a perfect codejam, lucky for us. Following and applying all the steps from a github repo and discussing every unit at the end was so helpful. And the quiz at the end of the day was fun. Dominik Tylczyński was the winner. Hope to build up more on top of what I’ve learned.

After codejam I left my stuff to hotel and went to a local pub. Vitaliy should have thought that the essential way to see Wroclaw is a pub crawling event. Something I would never disagree ?. 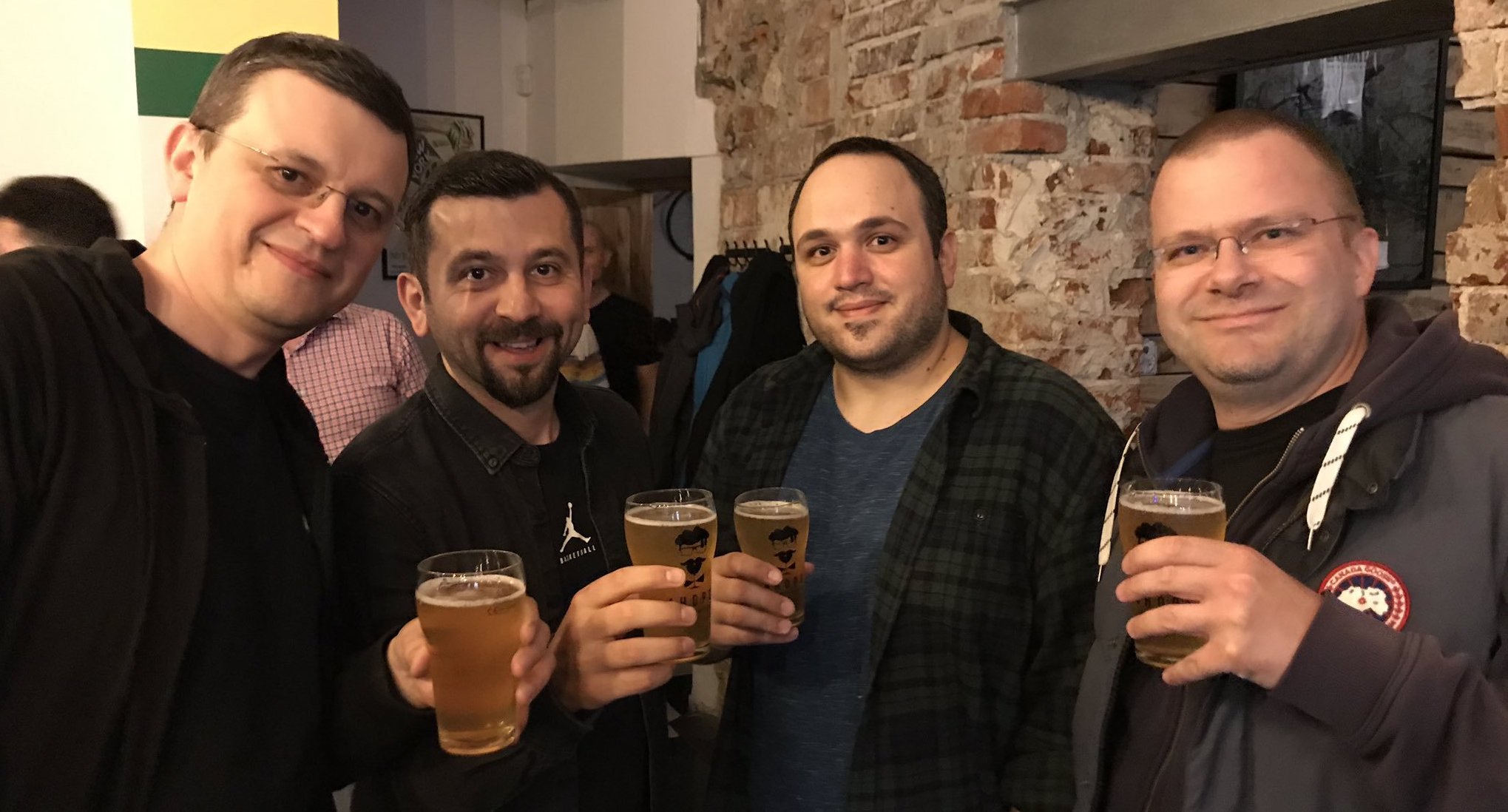 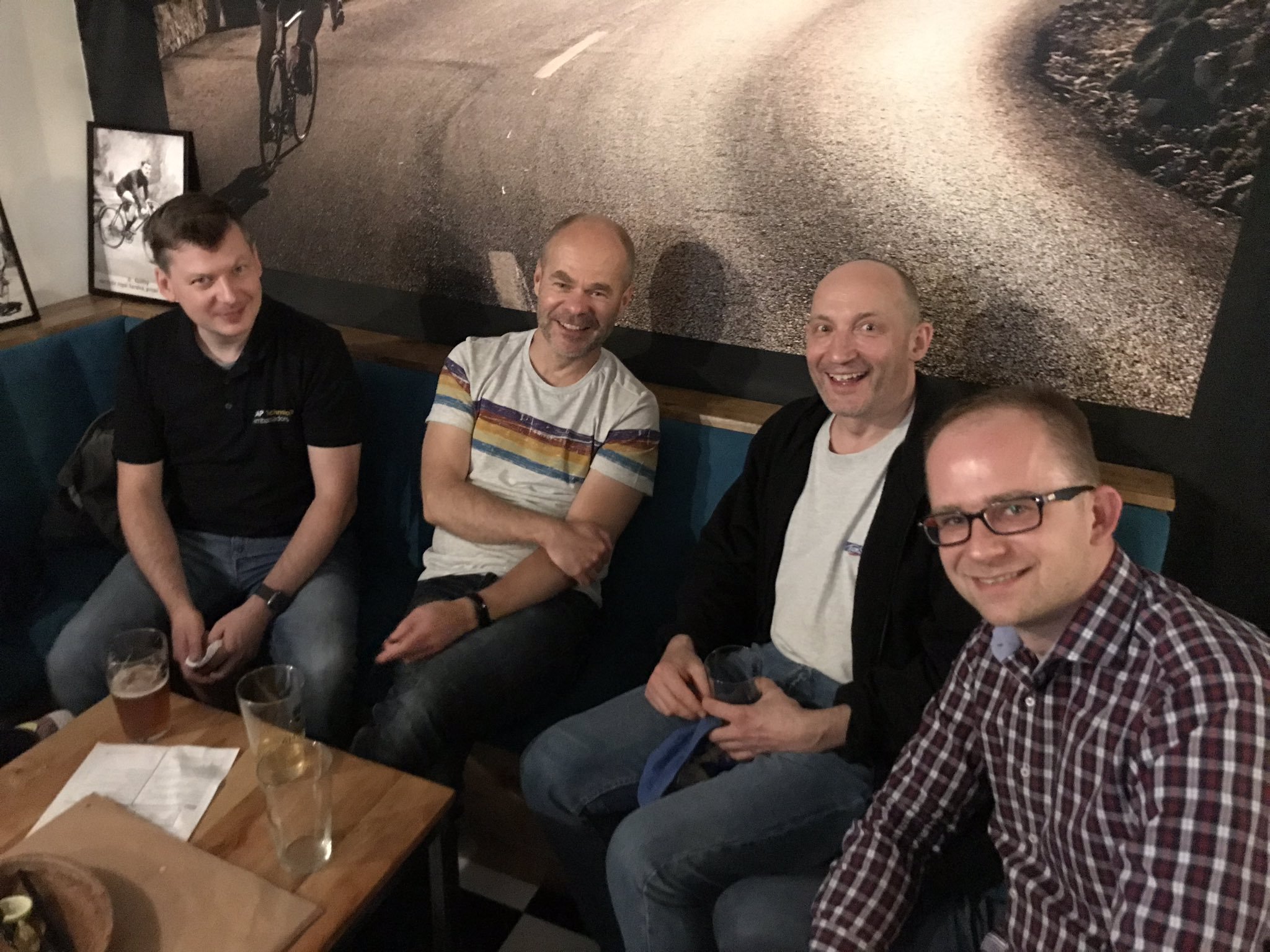 Speakers chilling before inside track 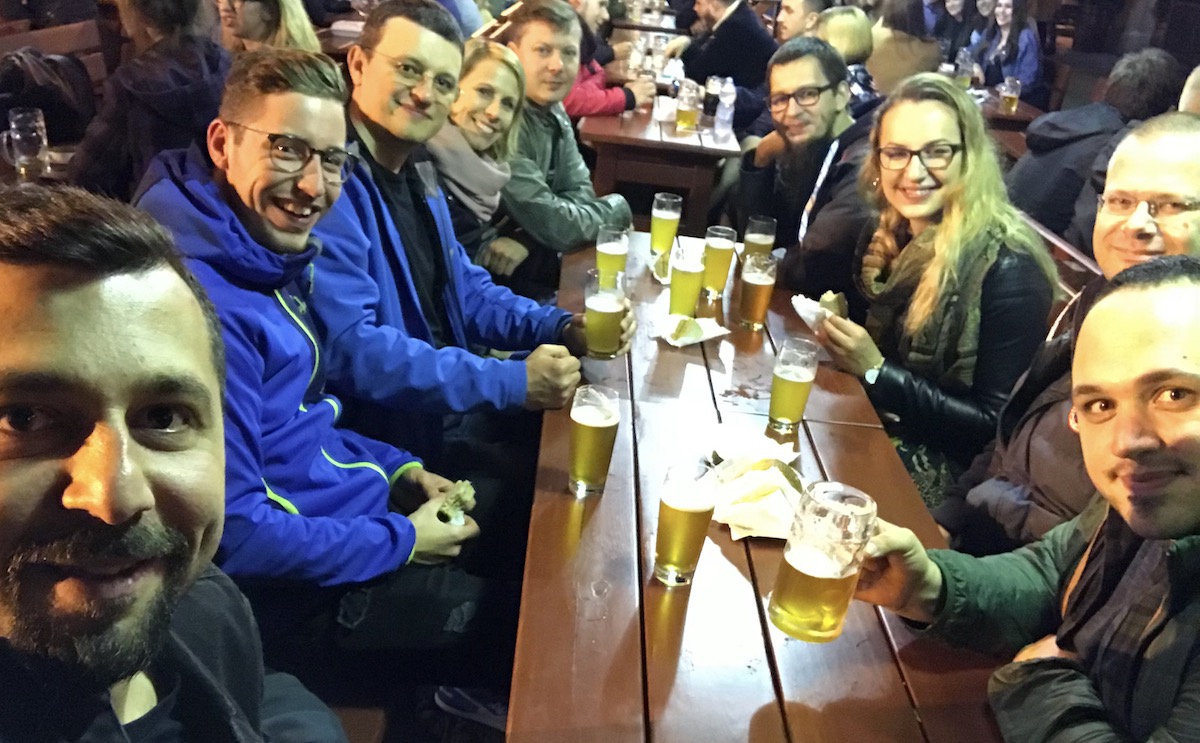 While we were moving from a pub to another, of course we visited couple of monumental places in the city. Our guide was in action and always filled us with history. Mostly history of pubs and pub owners ? 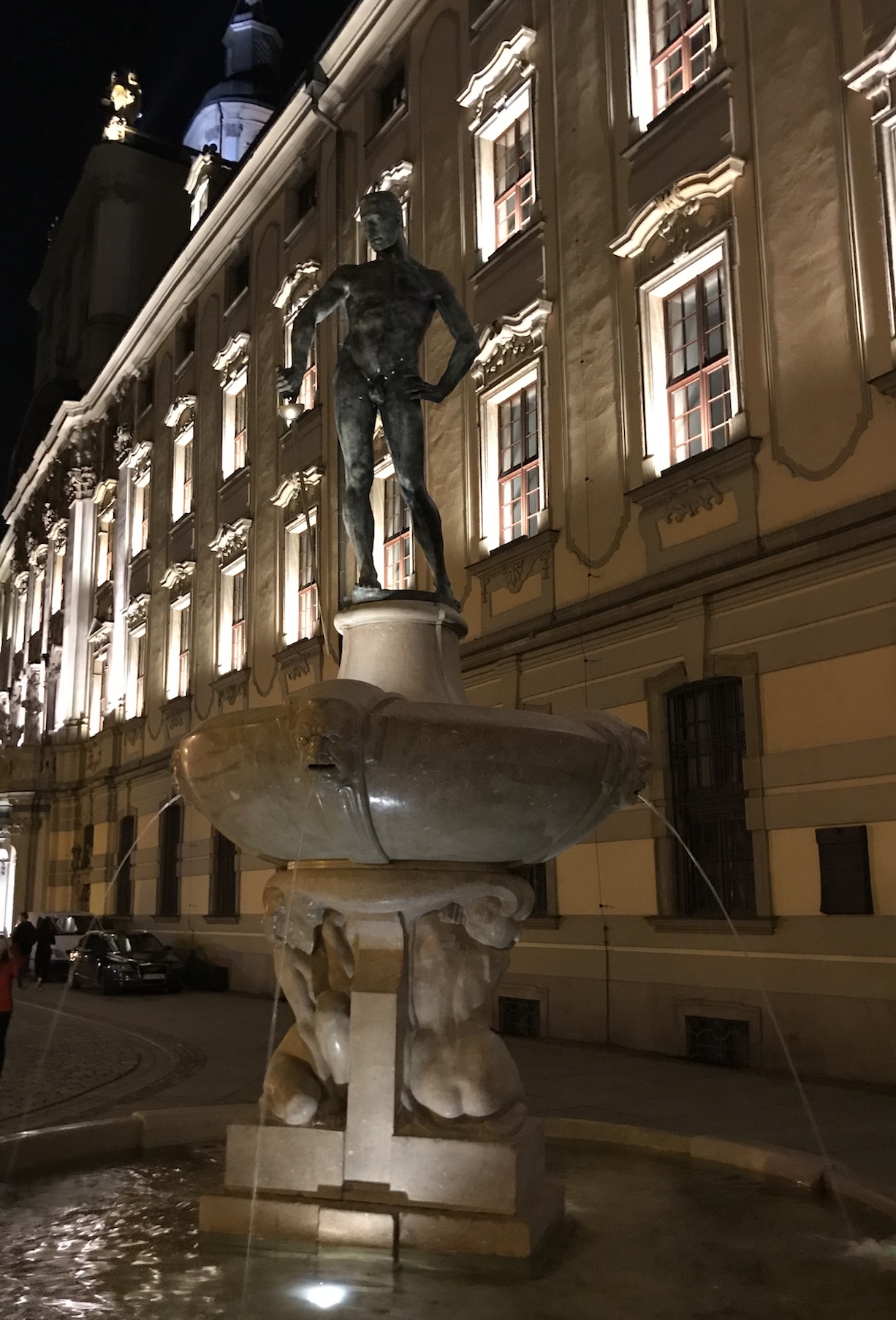 The variety and quality of pubs is way more than I expected. One of many reasons to attend sitWro and discover the beautiful city. 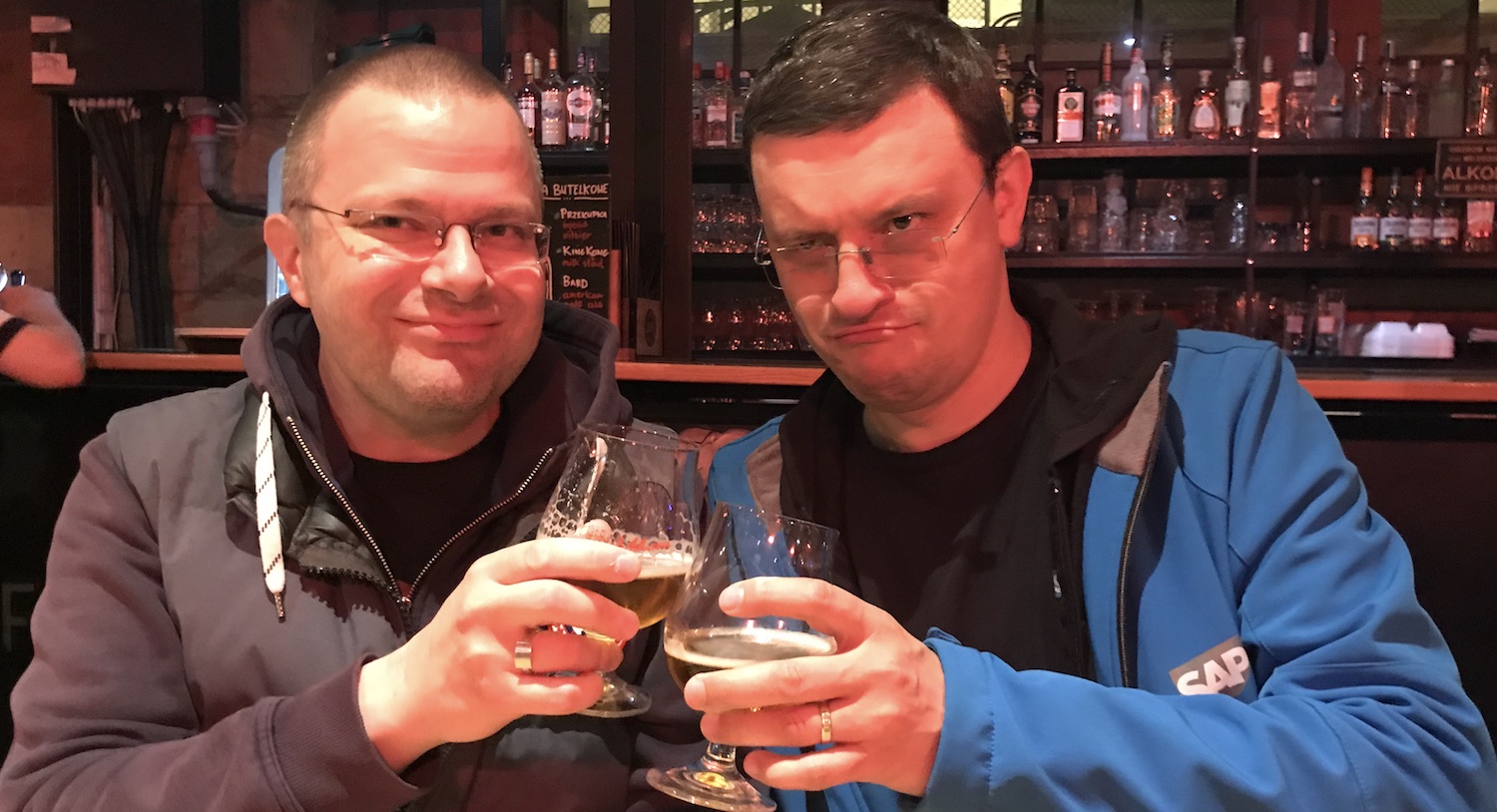 Saturday was the big day. The only challenge was the wonderful weather! However that challenge quickly dissolved just after the event had started. There were two tracks after eleven. Most of the sessions I joined were high quality with a great content. 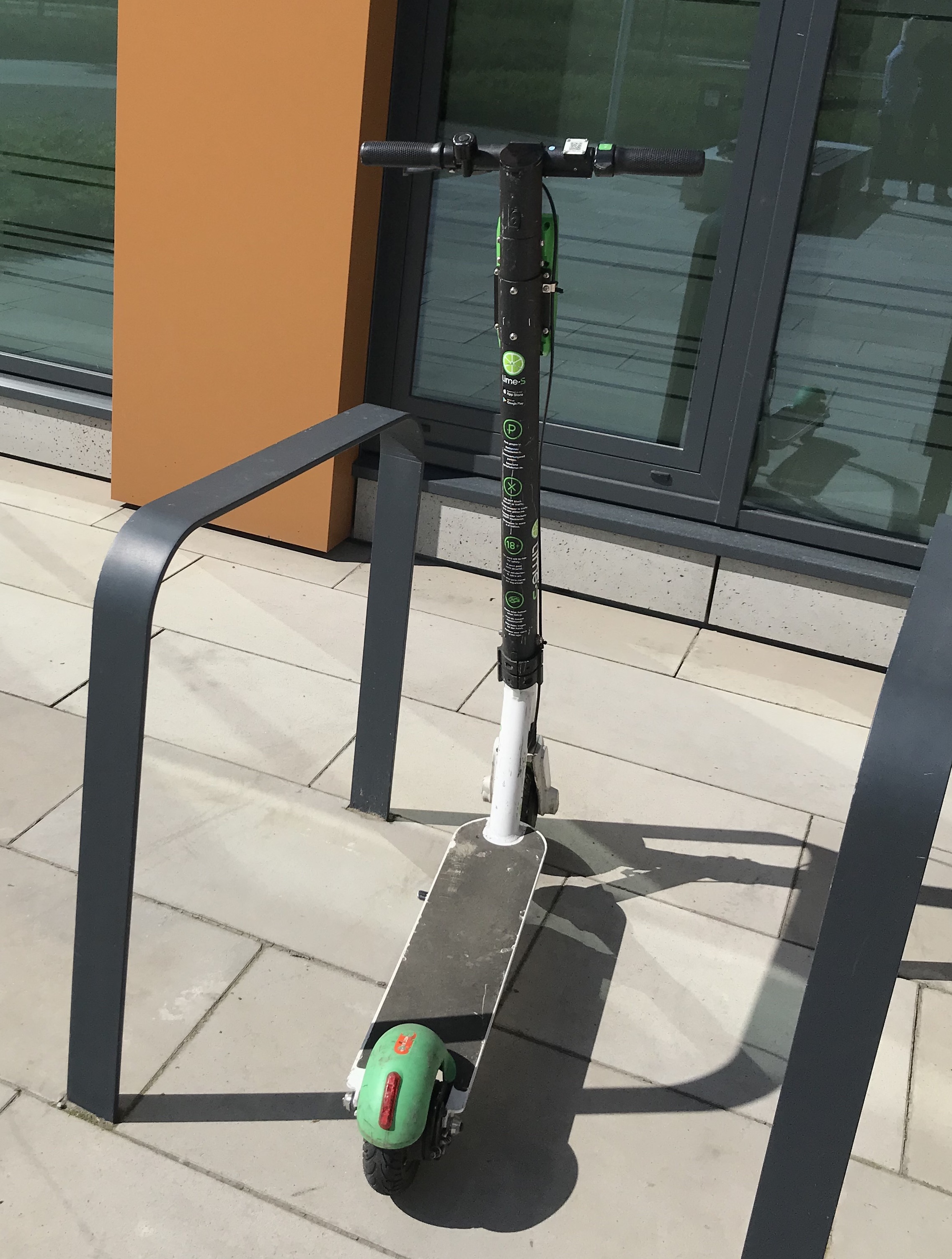 Helped a lot for short distances – parked just outside the building

I don’t want to dive into sessions one by one. But I strongly recommend you to check the link at the first paragraph. Some presentations are available there and follow speakers on twitter to get more insights. Even get in touch with them if you have a favorite topic. I’m sure they’ll be keen about sharing their knowledge.

Being an organizer is tough. However it’s a great feeling when you see people happy to spend their times with you, interacting with each other all day and leaving pretty satisfied at the end.

For me also meeting lots of people like Łukasz Pęgiel and Morten Wittrock who I know virtually from their excellent efforts for the community was exciting. They had a presentation at the end about open source contributions and specific projects that they are trying to support. A huge thanks and respect for their work ? . 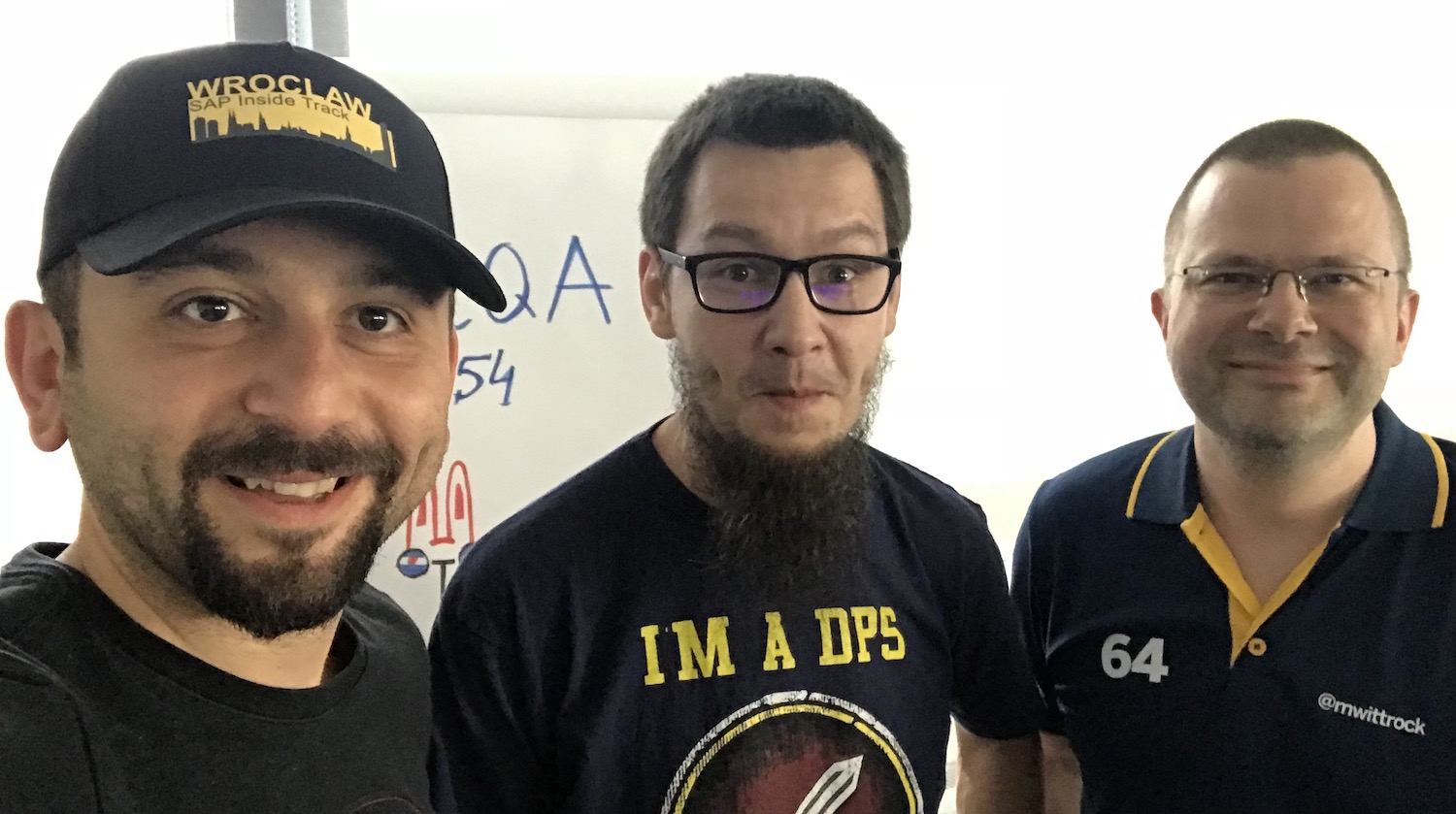 Inside Track is not only about sharing knowledge. If you haven’t heard it yet, there is a tradition after every sitWro, Polish grill! Another good reason to join as , I mean it could be the number one ?. 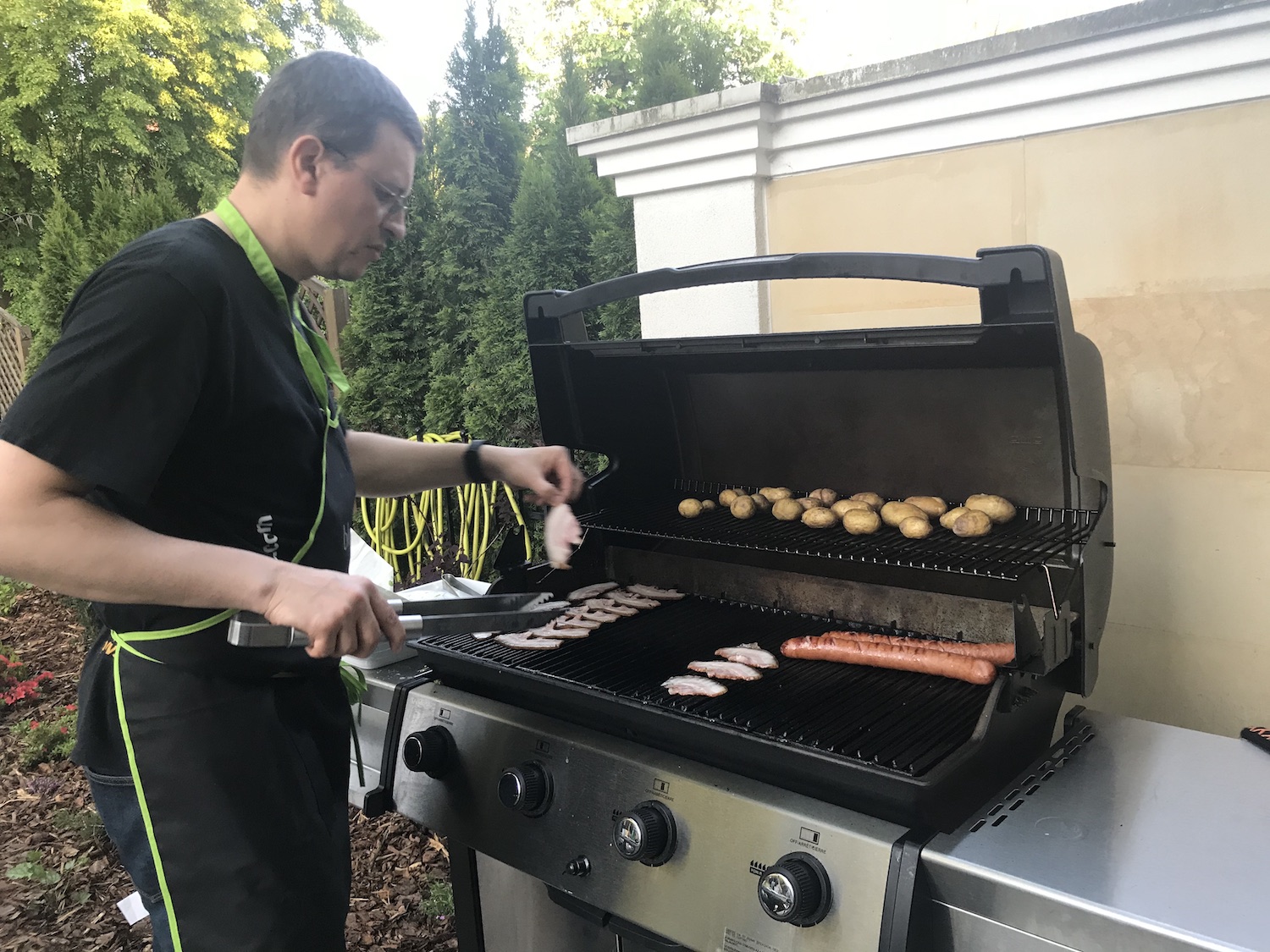 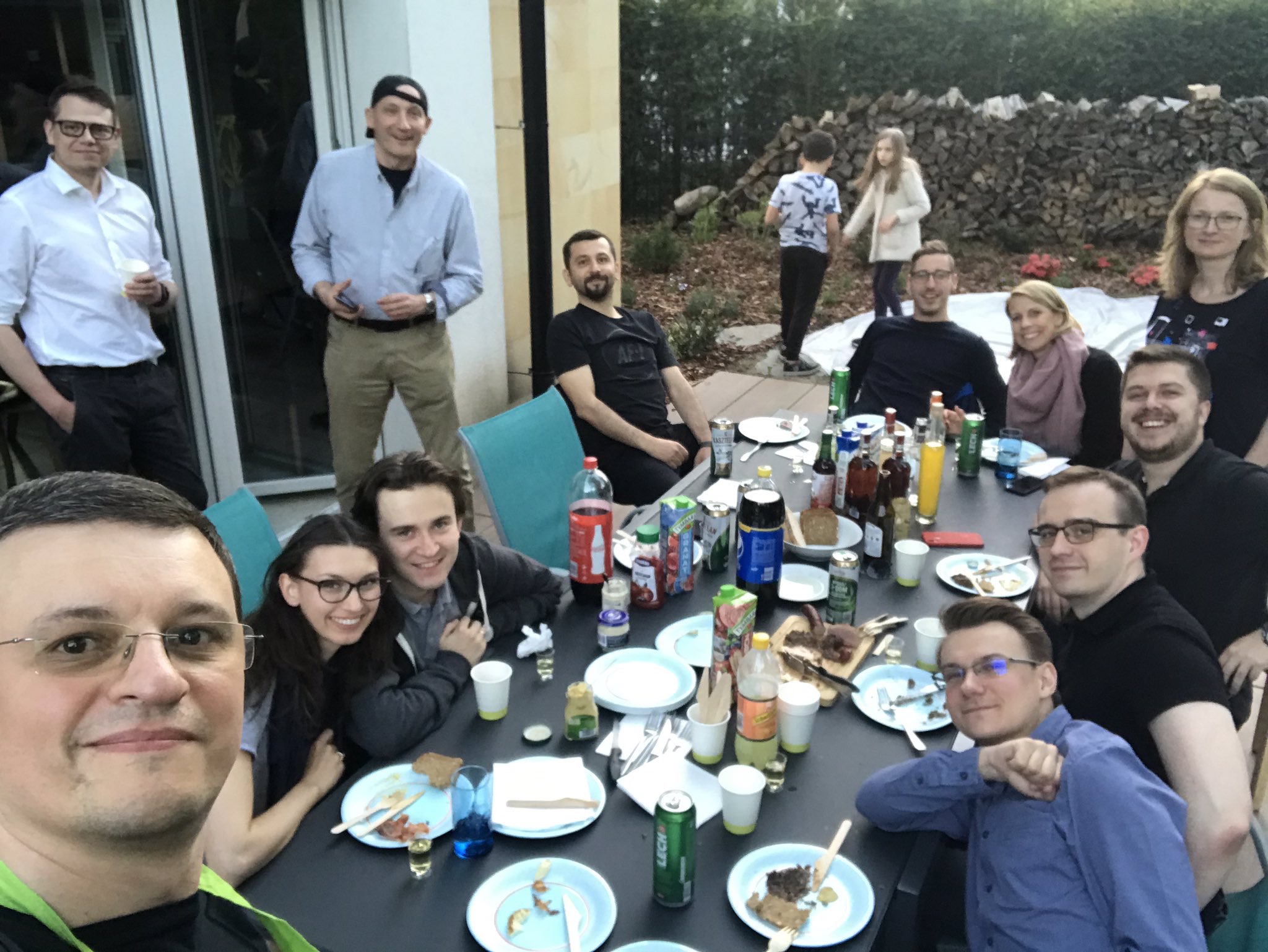 Different pieces of meat with horseradish, mustard and vodka including handmade version (strongest) from Michal Korzen. Polish guys had a lot of fun while they’re pouring various types vodka shots and expecting us to get wasted at the end of the night. (Some shots had tabasco) Well we managed to survive ?? Grill night was a glorious closing.

The day after I had couple hours to see around. Of course not enough but I had to go back to Warsaw. My special thanks to Michal and his wife for having me with them to Warsaw and leaving me to the airport ?. 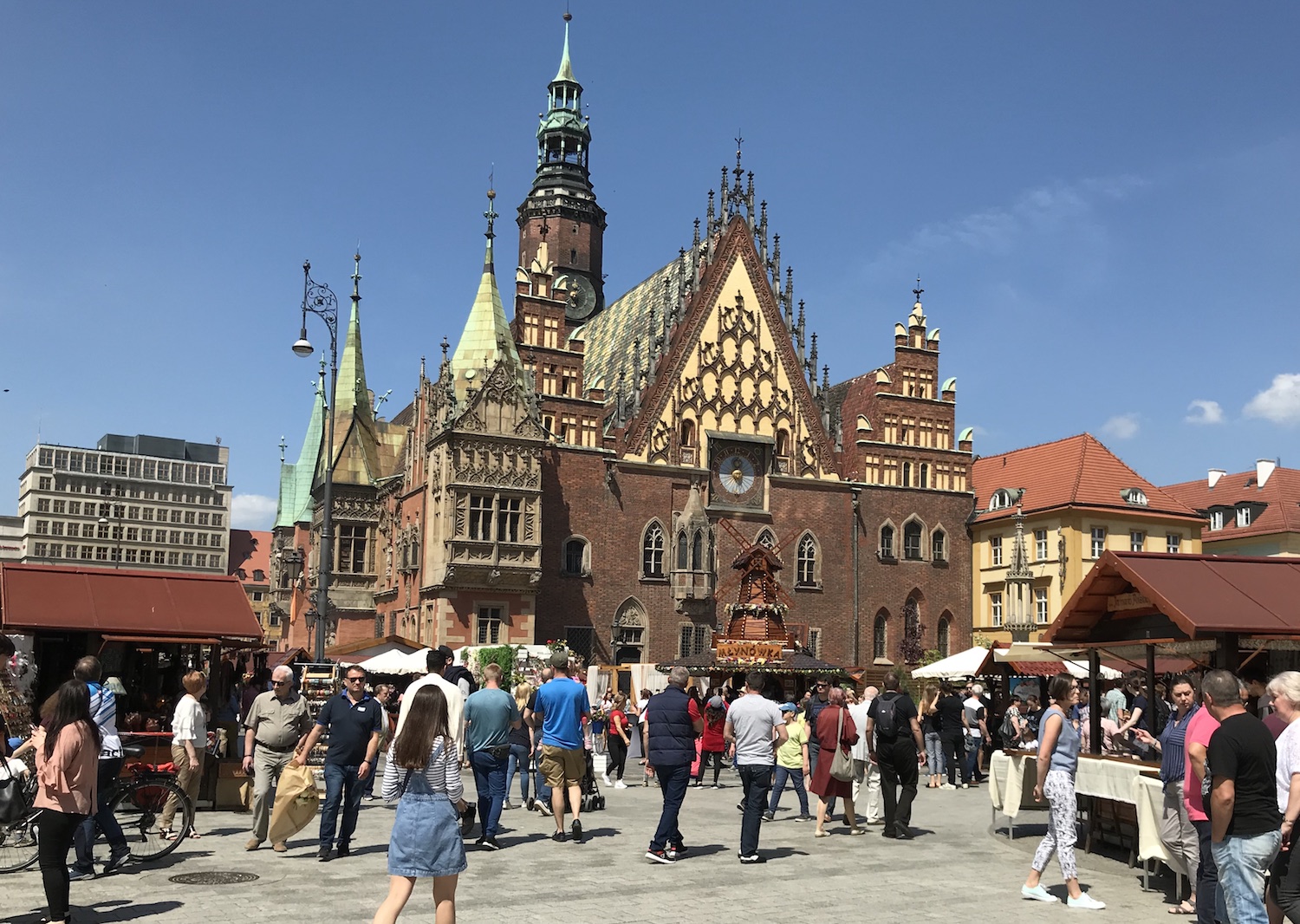 Finally, I definitely recommend sitWro to everyone. Don’t hesitate. Just go and see how valuable this experience is. Of course not only Wroclaw. There are dozens of them. Take a look at here. If you want to join SIT Istanbul, I’ll be happy to help you anytime. I personally will try hard to spare time for visiting different inside tracks as a participant or a speaker.

I love my job but not surprisingly there are ups and downs. These events are a great way for me to motivate myself. Meeting like-minded people all over the world and talking about technical stuff with a nice blend of personal stories is the center of my motivation and is the reason that made me write this post. Without human part of the story, technology is a cold medium that drags me outside of my real existence, making me more mechanical (a robot in the end).

Huge thanks to you all for being there and sharing the same passion with me!

Very nice write-up, thanks Huseyin. And it was great meeting you too!

I can only agree with Morten Wittrock : Very nice recap! Thanks for sharing. It was a pleasure meeting you at #sitWRO. Hope to be around at #sitIST sometime.

Thanks Svea Becker. It's a pleasure to meet you as well. You're always welcome to #sitIST!

The pleasure was mine Hüseyin!

I am happy that you appreciate our effort! 🙂

Your success is leaving no other option 🙂 Thanks again Pawel Grzeskowiak ! Everything was really very well organized.