In this blog series I will describe the use of RFC and BAPI technologies in the context of integration of the SAP S/4 HANA Public Cloud with On-Premise Systems. This kind of landscape is also called a Hybrid Landscape and we may as well talk about Hybrid Integration Scenarios.

You will learn which technical components you need and how to configure them. The blog series is split into multiple parts. The first blog post is about the underlying concepts and the positioning and you are reading it right now. The details of the test case are described in individual blog posts.

The specific case I am covering is the usage of “traditional” SAP integration technologies (RFC and BAPIs) which were partly whitelisted for usage with SAP S/4HANA Public Cloud. These technologies have been around for more than 20 years and were the work-horse concepts in the SAP ERP On-Premise world. But for the SAP Cloud they will only be required during a transition phase and will be replaced by SOAP and ODATA APIs as explained a bit further down.

To give you some insight how to use them during this transition phase, I examined various test cases to illustrate what can be done. Please consider them as starting point for your own examinations. Of course I would be happy to learn about what you have tried and achieved. Just leave a note in the comment section below.

BAPIs and RFC are sort of “ancient” SAP concepts for integration resp. communicating business information between systems. BAPI is an abbreviation for “Business Application Programming Interface”. The offer a stable interface with standard methods to access SAP Business Objects (e.g. Sales Orders) which can be called externally. If you want to learn more I suggest you take a look at this article in the SAP Documentation.

RFC is a technical protocol (Remote Function Call) which can be used to call RFC-enabled ABAP function modules from the outside. It was “the” protocol and came in various flavours, most importantly as so-called tRFC-Call (transactional RFC) which were of paramount importance for data exchange via ALE (Application Link Enabling), usually in the IDoc-Format. BAPIs are technically function modules of this type. We used to develop them ourselves based on the BAPI Programming Guide and they could also be called asynchronously.

Much more important than programming a BAPI yourself were those standard BAPIs which were delivered as part of the SAP standard. If you search for function modules starting with “BAPI_” in an SAP ERP System, you will find several thousands of them. This shows the importance of this concept in former times.

The limited positioning of BAPIs in the context of SAP S/4HANA Cloud had long been explained in SAP Note 2447593 and remains unchanged.
Here a quick recap: 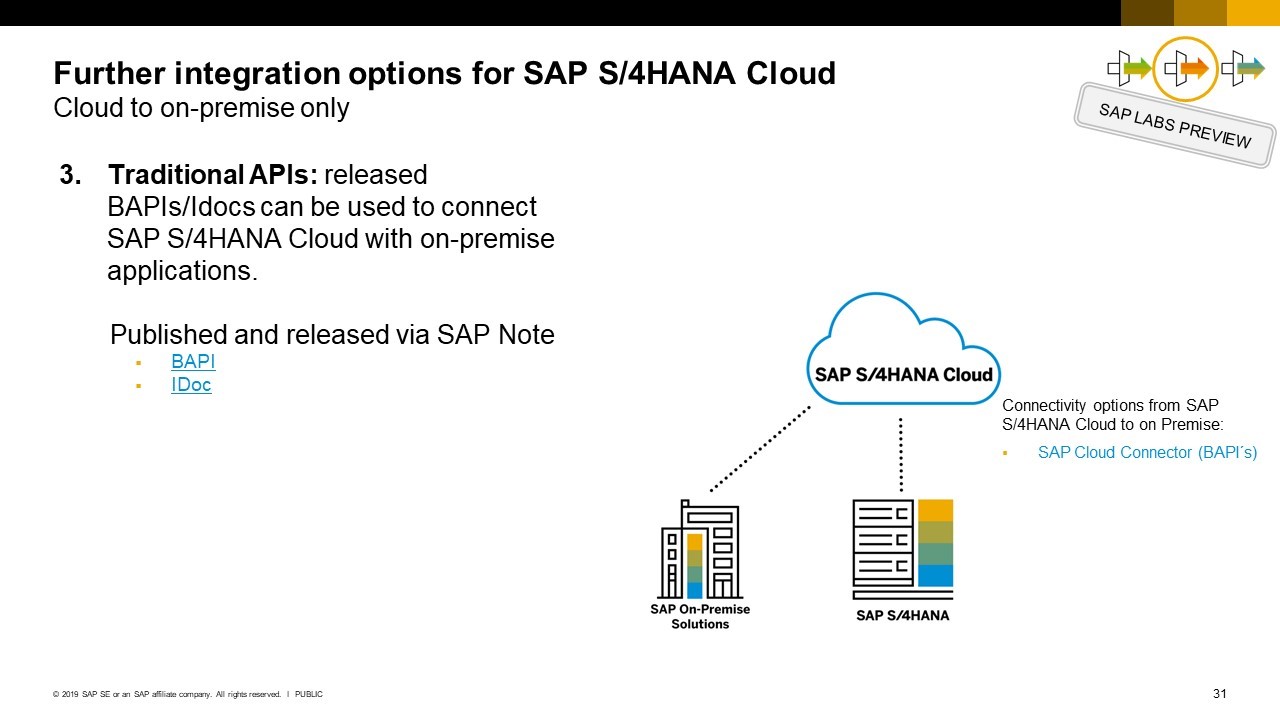 In the other parts of this Blog I will examine the following test cases:

Please keep in mind what is pointed out in the section “BAPIs in SAP S/4HANA Cloud – When And How To Use Them”! What I describe in this series should be considered as experimental work and not as a recommendation for productive scenarios. If you want to use BAPIs for productive Cloud scenarios you must follow the process described in the notes mentioned above (SAP Note 2653671 and SAP Note 2447593).

Please be aware: Without access to an ERP backend you will have a hard time to obtain the BAPI documentation. It is not available online anymore or at least I couldn’t find any. You can get a  WSDL for a BAPI from an OnPrem ERP Backend or S/4HANA Backend via SAP Process Orchestration, too.

Quick Guide to set up the Cloud Connector

In case you don’t have an SAP Cloud Connector already available you need to set it up from scratch. There are a numerous blogs available how to do this. This Blog by Ali Chalhoub explains it very nicely and in much detail. Actually you should be fine to go with the documentation in the SAP Help Library. This part refers to online information resources which describe all the necessary steps in sufficient detail. The description is based on the 1905 documentation material. Steps 1-4 can be skipped if an already operational SCC-Setup can be used. Here is a quick overview if the steps:

Once the SCC Setup is working properly a Communication Scenario with BAPIs can be used: 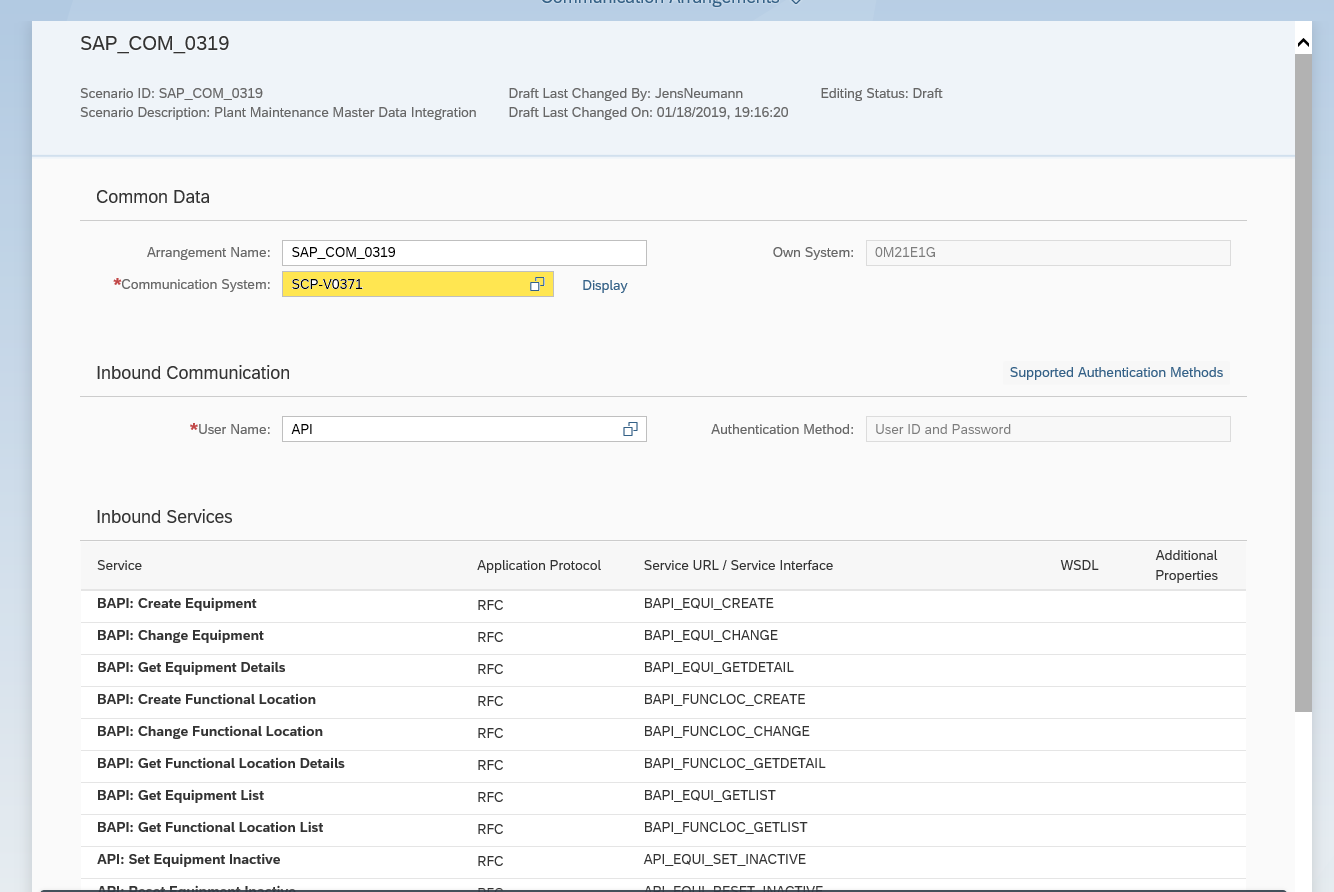 Your components should now be ready for operation!

In the next blog post I will go into detail for test case 1.