As with all technological advancements, few areas within Artificial Intelligence are hyped beyond proportion that instills an element of fear of our world being taken over by a new species self-learning bots. According to the renowned physicist Stephen Hawkings “The development of full artificial intelligence could spell the end of the human race”. Gulp. Intelligent machines powered by AI come in a myriad of forms and beyond all the hype and apprehension, AI is advancing at a colossal pace and is being deemed as the “new electricity”.

Artificial Intelligence (AI), Machine Learning (ML), Natural language processing (NLP) and its counterparts deep learning and reinforcement learning are widely adopted in a variety of industries ¹ . Let’s simplify and understand these technical jargons into bite sizes nuggets before we delve into an exciting world of conversational UI and chatbots.

AI is sometimes referred to as Machine Learning, but as a matter of fact, ML is a subset of AI. Deep learning and reinforcement learning are promising areas within ML. ML is the use of statistics that gives computers the ability to learn from data. ML-based predictions depend on clean and qualified data sets. Deep learning is gaining quite a lot of traction recently in a wide variety of areas. Deep Learning model can extract complex patterns and sequences in a data set ¹ and is a primary technique employed by NLP engines. 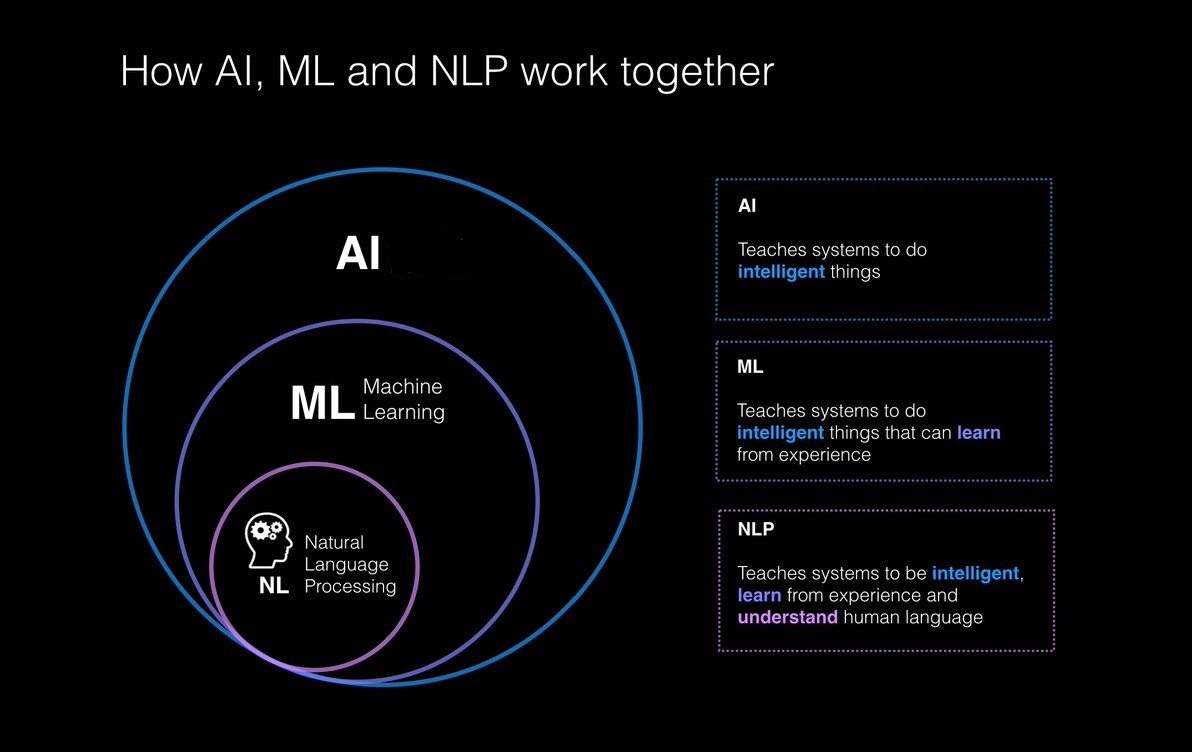 Deep learning in tandem with other models is embraced by popular digital assistants such as Siri,  Google Translate and Cortana for both speech and text recognition. Google used large volumes of EU and UN documents to train its translation engine primarily because the documents provided the same text professionally translated into different languages.

Reinforcement Learning a key algorithm employed by autonomous vehicles is also gaining popularity and it basically involves training software towards a certain reward oriented goals mimicking human behaviour. Reinforcement learning combined with deep learning has given rise to a new breed of prediction system that is widely used in autonomous machines.

Natural language processing is a key componentry of AI which enables a computer program to understand human language as its spoken. Building an NLP engine is quite a challenging task as it requires computer programs to decipher human speech which is often ambiguous in nature especially with complex linguistic structure. The processing complexity exponentially increases to decipher wide spectrum of parameters such as slang, social communication intent and regional dialect. We all know that traditional computing language relies on precise, structured and unambiguous commands.

Syntax and semantic analysis are two primary techniques used within NLP. The syntax is the arrangement of words in a sentence to make grammatical sense. NLP relies on the syntax to assess meaning from a language based on grammatical rules. Semantics involves the use and meaning behind words. NLP uses algorithms to understand the meaning and structure of sentences ².

NLP has evolved itself from being from a rules-based approach, that employed simple machine learning algorithms. The algorithm basically searched for words and phrases within the textual context and was programmed to provide specific responses when it recognised certain phrases. On the contrary deep learning technique is more flexible and intuitive where algorithms learn to identify speakers’ intent from large volumes of data sets, that is used to train itself.

SAP recently acquired a French startup Recast.ai which has now been rebranded as SAP Conversational AI. Recast.ai provides a development environment that uses natural language processing and helps in the rapid development of chatbots using its sophisticated NLP framework that provides natural language interaction for consumer-facing channels. SAP Conversational AI brilliantly complements SAP CoPilot which is positioned as a digital assistant for enterprise users and also acts as a bot integration hub for the enterprise community.

Training bots is the biggest pain when it comes to bot building exercise and recast.ai simplifies this problem by creating a new breed of self-training bots using a game-changing collaborative deep learning technique. Recast.ai is fundamentally a collaborative bot building platform where global training of models is undertaken by thousands of users who use the platforms to build their own bots. To train bot systems efficiently, a sizeable and qualified dataset is crucial. Having a massive stockpile of unqualified data is going to counterproductive and will is prone to make the bot dumber. That’s the key reason why a clean set dataset to train conversational systems is vital and Recast.ai’s revolutionary platform allows high-performance natural language processing that supports more than 20 languages and helps in building conversational chatbots. Here is a short preview of a smart bot that is capable of providing suggestions to movies and tv shows.

With rapid advancements in the field of NLP and bot building engines such as SAP Conversational UI, chatbots are gaining prominence and are widely being adopted as trusted personal assistants with enhanced intelligence. Bot are increasingly becoming business context-aware and are now capable of proactively providing suggestions and solutions in real time for enterprise and consumer-facing channels. So brace yourself for the new era of digital bots!