One of the key success for any company would be customer retention and customer satisfaction. With emerging support maintenance/operational cost and tough competition, it makes more mandatory for any business to adopt the innovative technology and grab profit immensely by maintaining a successful algorithm for a long term without human intervention. Chatbots can be fully automated with a human touch there by providing a complete 24*7 support without any human intervention.

This blog details how to integrate SAP Conversational AI Chatbots with C4HANA using SAP Cloud Platform as a middleware.

To develop the bot, we need three systems/platforms namely

Let us discuss briefly about these three systems.

SAP Conversational AI formerly known as recast.ai is an end-to end bots platform build on robust natural language processing (NLP) technology. Using this platform, chatbots can be developed and trained for any customer use case and can be easily deployed on most of the user messaging channels like Webchat, Facebook messenger, twitter, slack etc.

SAP Cloud Platform is SAP’s innovative cloud development and deployment platform. It is an enterprise platform-as-a-service (enterprise PaaS) that provides comprehensive application development services and capabilities, which lets you build, extend, and integrate business applications in the cloud.

It has two environments for application development- Neo and Cloud Foundry.

Neo: It is SAP Proprietary and supports only Java, HTML5 and HANA XS applications.

Cloud Foundry: It is based on the open-source application platform managed by the Cloud Foundry Foundation. It supports many languages including Node.JS, PHP, Java, Ruby, Python etc.

Let us think of a simple use case where the user wants know the status of a service request he raised (here in C/4 HANA system). To develop the bot according to the use case we can divide the development process into 3 . 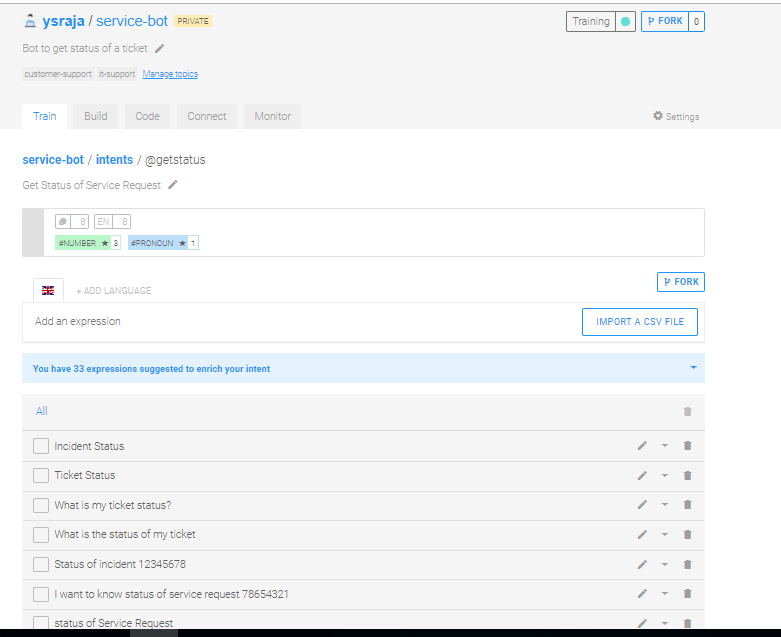 In the former case bot automatically identifies the ticket id as the number which is a golden                 entity is present, but in the latter bot needs to ask the user for the ticket id.

Under the requirements tab under Build of the skill we store the number detected in the user               expression as Ticket ID. If the Ticket id is missing in the expression, we will ask the user for               the same. 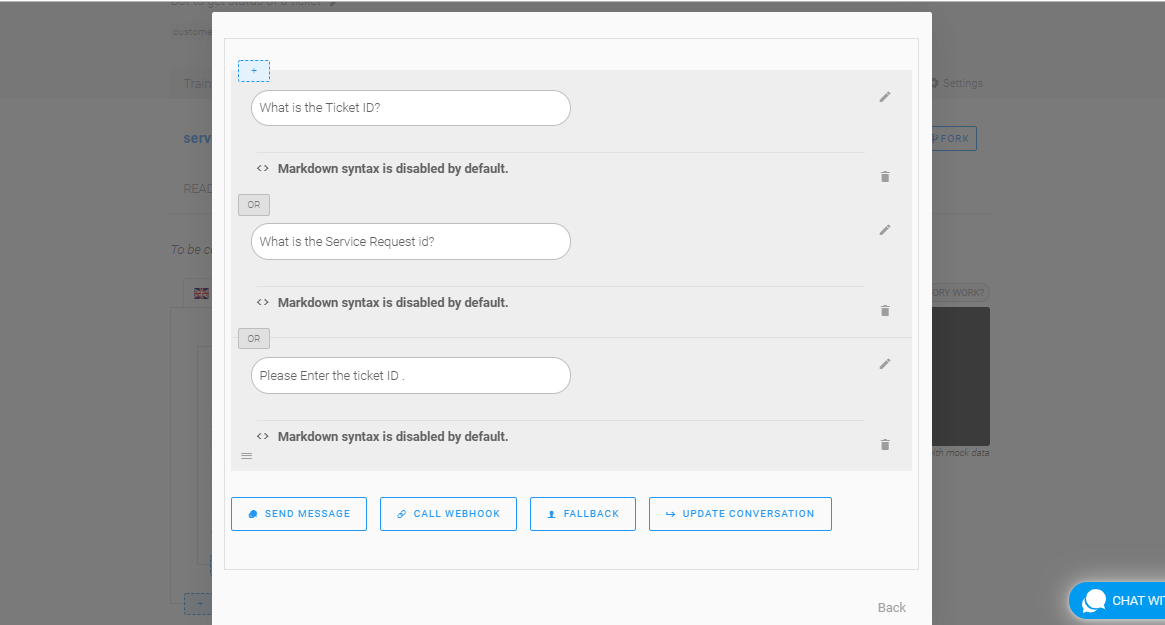 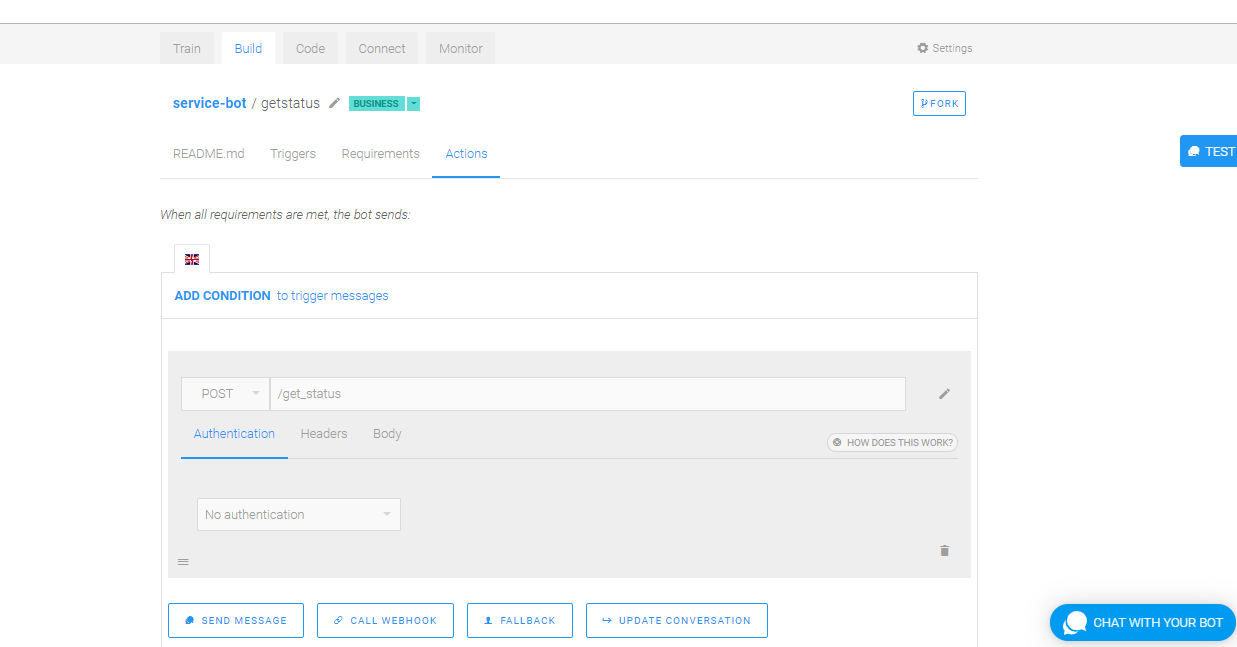 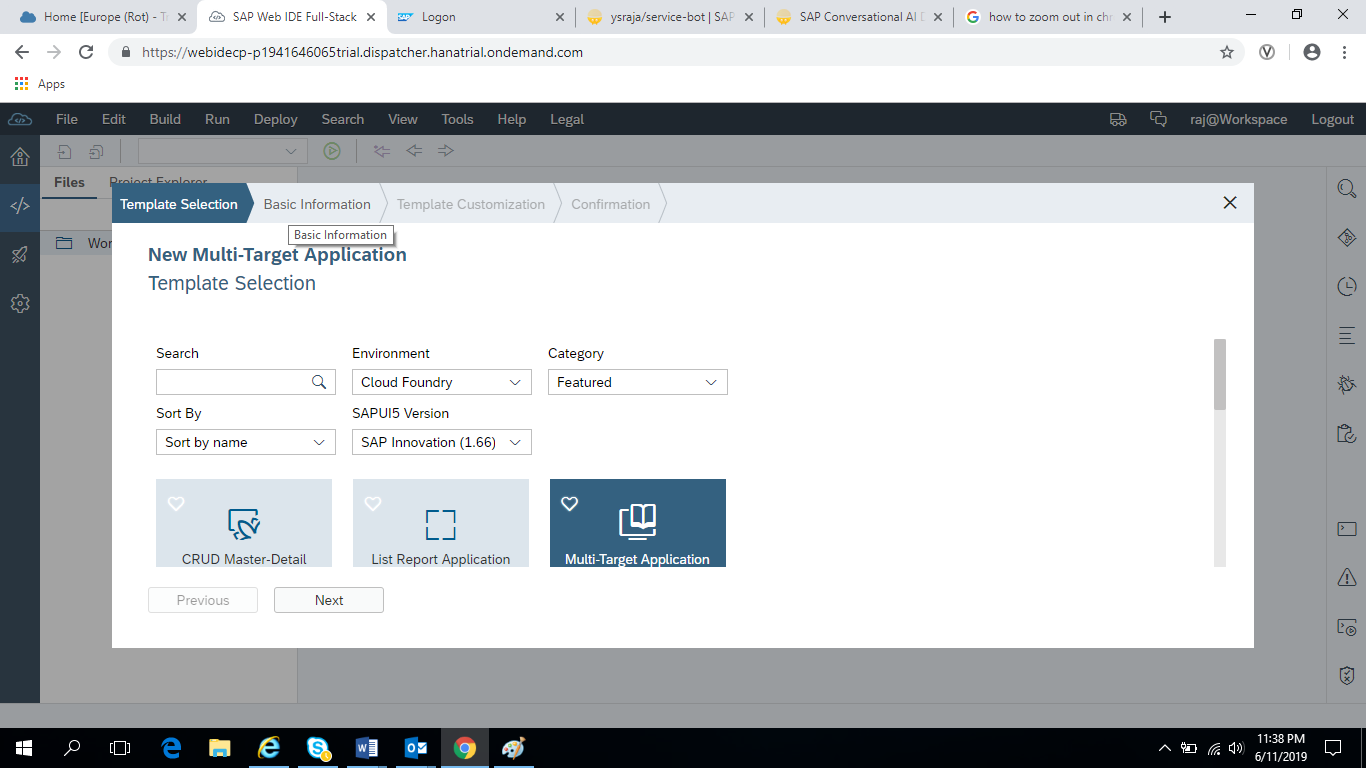 Please note that Authorization details should be base encoded. i.e the base64 encoded       string  of username:password.

Here in http request we are using SAP C4C standard OData service ServiceRequestCollection to get the status of the ticket by passing the ticket id received from user.

Now our Bot is ready let’s chat with the Bot and get the status of a ticket. 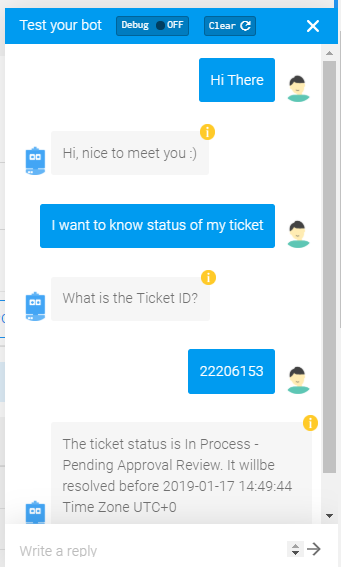 The Status in the C4C for the same ticket is the same as the reply we got in Bot.

Hello! This is a very good example of how to create a Multi Target Application connected to an instance and a Chatbot. I tried making my own but for some reason it failed. Could you please share your js code maybe on Github? you can erase your authentication and OData URL.

Thanks for this wonderful blog. Can you please share the js script, which will be of more help.

I am getting problem while build. its showing error of routes. can anyone please help me? I am trying to implement it on trial account.

The js file which you had shown, I am not able to make it work. There are build issues. Is it possible to share the whole js file ?