Parental Leave: The Most Empowering Experience of Lee Schosid’s Life 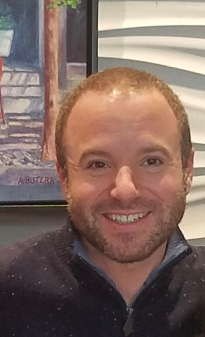 As a Senior Director of Global Brand and a member of SAP for over a decade, Lee Schosid has experienced his fair share of growth and change. One such change Lee was not thinking about when he joined SAP was a change in our parental leave policy. Back when Lee started, SAP had no parental leave policy, and now we offer up to six weeks of leave for new fathers.

The father of 22-month old daughter Sadie, Lee had some reservations about taking parental leave at first. But those reservations quickly disappeared when he spoke with his manager, colleagues, and his wife Amanda. Lee wasn’t aware of SAP’s parental leave policy when he and his wife learned that they were expecting. He asked a fellow coworker who was also a father about it and was brought up to speed. His interest grew when he spoke with his manager Laura Johnson. Laura said, “You aren’t going to get the time with your children back, so we have to figure this out.” Lee was grateful to have a manager with empathy who is also a parent. The question was not if but when Lee was going to take leave.

The reactions Lee got from his friends and family when he told them about SAP’s policy were very positive. His dad mentioned that he wished he had something like it when his kids were growing up, and Lee’s mom was over-the-top excited. Many of his friends were amazed as well, saying they only get a week off, and they were happy for him.

Lee took all six weeks of parental leave, splitting it into two-week chunks for when Amanda needed him most. He took leave for three weeks after Sadie was born, then two more in October once Amanda went back to work, and he took his final two during the first two weeks of August.

Lee says, “It was incredible, it was one of the biggest benefits that I had never known about. I think it’s such a huge missed opportunity for people who don’t take advantage of it.” Lee is incredibly thankful for SAP’s policy, work-from-home options, and flexibility. 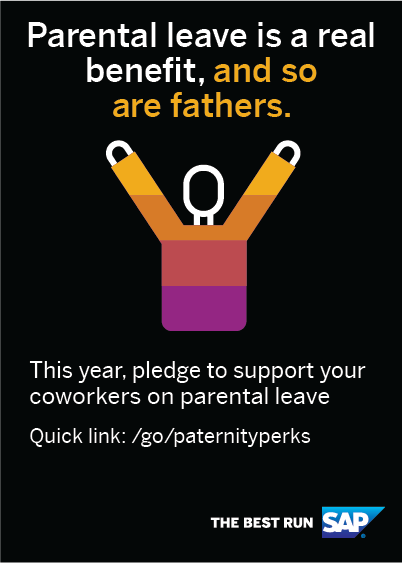 Lee believes most people work where they feel they can be most productive. Lee mentions, “There’s something super refreshing about the fact that I don’t feel like just because I’m not in the office I’m missing something.” He attributes much of that flexibility to the relationship he has with his manager Laura Johnson and their collective trust in each other.

For example, once when Lee was working from home, he had to warn people on the other side of his calls that they might hear a child crying or Elmo in the background, but Lee says Laura tends to have an opinion along the lines of, “You perform, you have been with SAP for a number of years for a reason, and I don’t mind at all if I hear your child in the background.”

Lee notices a change in the general attitude towards flexibility and parental leave as well. He mentioned he was on a call recently with someone in Germany who was at the park taking the call from a bench while watching her child play on a playground. In past years the average employee might have thought differently about that. However, Lee now has a greater sense of empathy and understanding.

Lee also points out how there is often a bias that Moms are the primary caregivers, but Lee prides himself on being a true 50/50 partner. His wife works full time as well and is very passionate about her career and having an equal partnership. Thanks to his leave, Lee was able to take the time he needed to develop the confidence he needed to take care of his child. He reflects, “As a dad, being able to have the same level of confidence in taking care of my child that my wife has is super important. I don’t think I would have been able to get there as quickly if not for this opportunity.”

Parental leave was one of the most empowering experiences of Lee’s life as he recalls, “I don’t know if I have ever felt as empowered as I felt during those first two weeks”. Lee closed his comments with a statement for fathers considering parental leave as he said, “It was so needed, we needed that time and it was great. Becoming a parent is the biggest life change ever!”

As part of our EDGE action plan, the Global Diversity and Inclusion Office is launching numerous campaigns to create awareness and change behavior that benefits both men and women. A recent Deloitte survey found 57% of men said taking parental leave would be perceived as a lack of commitment to their careers but a wealth of research shows men who take parental leave are more active and engaged fathers with stronger family relationships, lower divorce rates, and more successful partners. Paternity leave is also associated with overall improved mental/physical health and well-being for new mothers and new fathers. SAP’s six weeks of paid parental leave takes us one step closer to gender equality as parents share child-caring responsibilities more equally and mothers, fathers, and SAP see the benefits with happier and more productive employees.

Great article, Tim! Thanks for shedding light on this great benefit that we offer for our male colleagues, as it especially helpful for our female colleagues as well.

Congratulations, Lee - I'm glad you were able to take full advantage of our paternity leave and got to spend time with Sadie during the most crucial and exciting times!