WeChat Mini Programs the future of Mobile in China, and the World?

As Facebook keeps trying to catch up with WeChat, Tencent’s is solidifying the leading market position with the so-called “Xiaochengxu”, which translates as “mini-programs”. A concept went mainstream in 2018, which allows third parties to build applications within WeChat have undergone astonishing growth. In total, there are 2.3 million Mini Programs online today with daily active users at approximately 230 million. As a comparison, the iPhone was released in 2007 and it has over 2 million iOS applications as of today. So, making the point that the revolutionary idea has the potential to replace mobile apps, isn’t so far off.

What is a WeChat Mini Program?
Essentially a lightweight app, exclusively accessible through the WeChat app. You can order a meal, hail a cab, book a flight, check the news, manage your credit card bills, all out of WeChat. Tencent’s mini-programs are mainly distributed in the games and life categories and 28% In the Top-100 are built by Tencent.

What are the advantages of WeChat Mini-Programs?
The single most important advantage lies in the seamless connection between Public Accounts and Mini Programs, which helps to build the link from content marketing to e-commerce, ultimately increasing the conversion rate. As brands are recognizing various ways to leverage this popularity and drive sales. Another noteworthy advantage is usability aspects, so users can conveniently use mini-programs without downloading an app. Due to the mechanism better performance, minimal data footprint, further simplify and speed up the process of accessing an app.

The Downside of Mini-Programs
The biggest pain is mini-programs are tight to the WeChat platform, means despite the cost of creating Mini Programs is much lower compared to traditional native and web Apps or web-Apps, it is a comparison which does not make much sense, it’s rather becoming an additional channel, instead of replacing existing ones. So, the often-made point, Mini-Programs will extinct app stores is not going to happen soon but may be true for the one or other brand in China. Another annoying problem is the absence of push notifications, which makes the Mini-programs a passive tool, for now.

With over 1.5 million developers registered on the WeChats platform, it’s safe to say that Tencent overcame the initial rocky start of Mini-Programs and its set for further growth. Following WeChat’s big success of mini-programs, it isn’t a surprise that Alibaba follows the path by offering Mini Programs by offering the same within Taobao and Alipay, so stated Alibaba beginning of January 2019 over 500 million Mini Program users, and 170 million daily active users. Due to the strong position of Alibaba in e-commerce, the mini-programs have a stronger focus on service offerings, given the company’s weakness in content and social.

How To Build A WeChat Mini Program In 2 Minutes
Though the development process can be complicated, there is still an easy and fast way for you to get started. After this short tutorial, you will have one mini program running on your WeChat app. As a Mini program is based on WeChat you need a WeChat Account and install the IDE (Integrated Development Environment) to get your development started. The IDE consists of easy to use code editor, compiler, debugger, simulator and tools to manage the lifecycle. You can download from here.

For the first time using this IDE, a QR code will be shown. Open your WeChat to scan the QR code for logging in. Then, create a project using a mini-program template. For the AppID, you can select “Test Account”, that’s how you can avoid going through the registration process, which takes some effort and is not necessary for getting started. 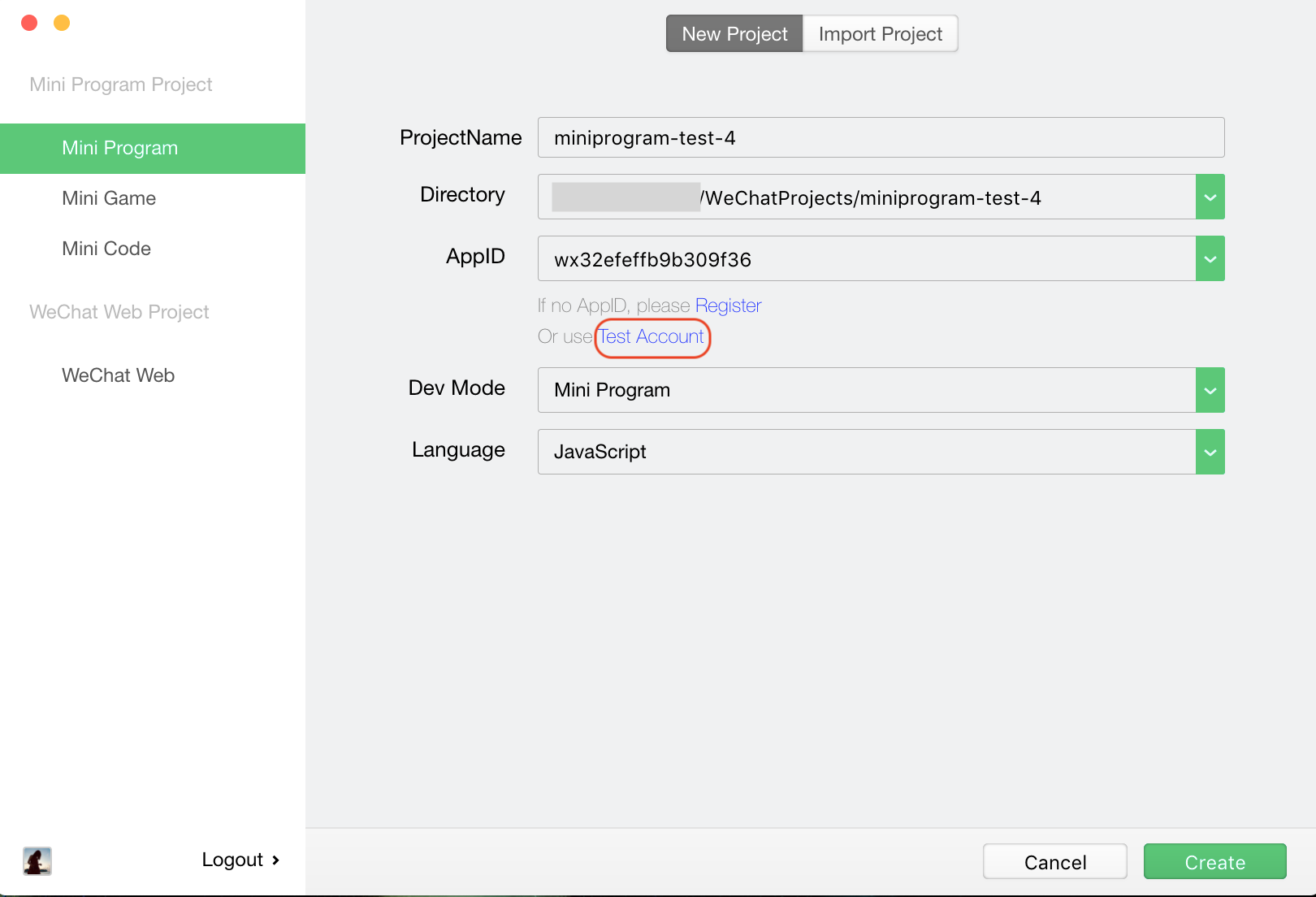 Now, the project has been created. On the very left panel, you will see a simulator. The template gets your WeChat account information and displays that on the screen. You can also try that on your real device. Click the “Preview” button, which will generate a QR Code, use your WeChat to scan this QR Code, this mini program will be loaded on your device. But keep in mind, this is bound with your personal account, which means you are the only one who can access this mini program. 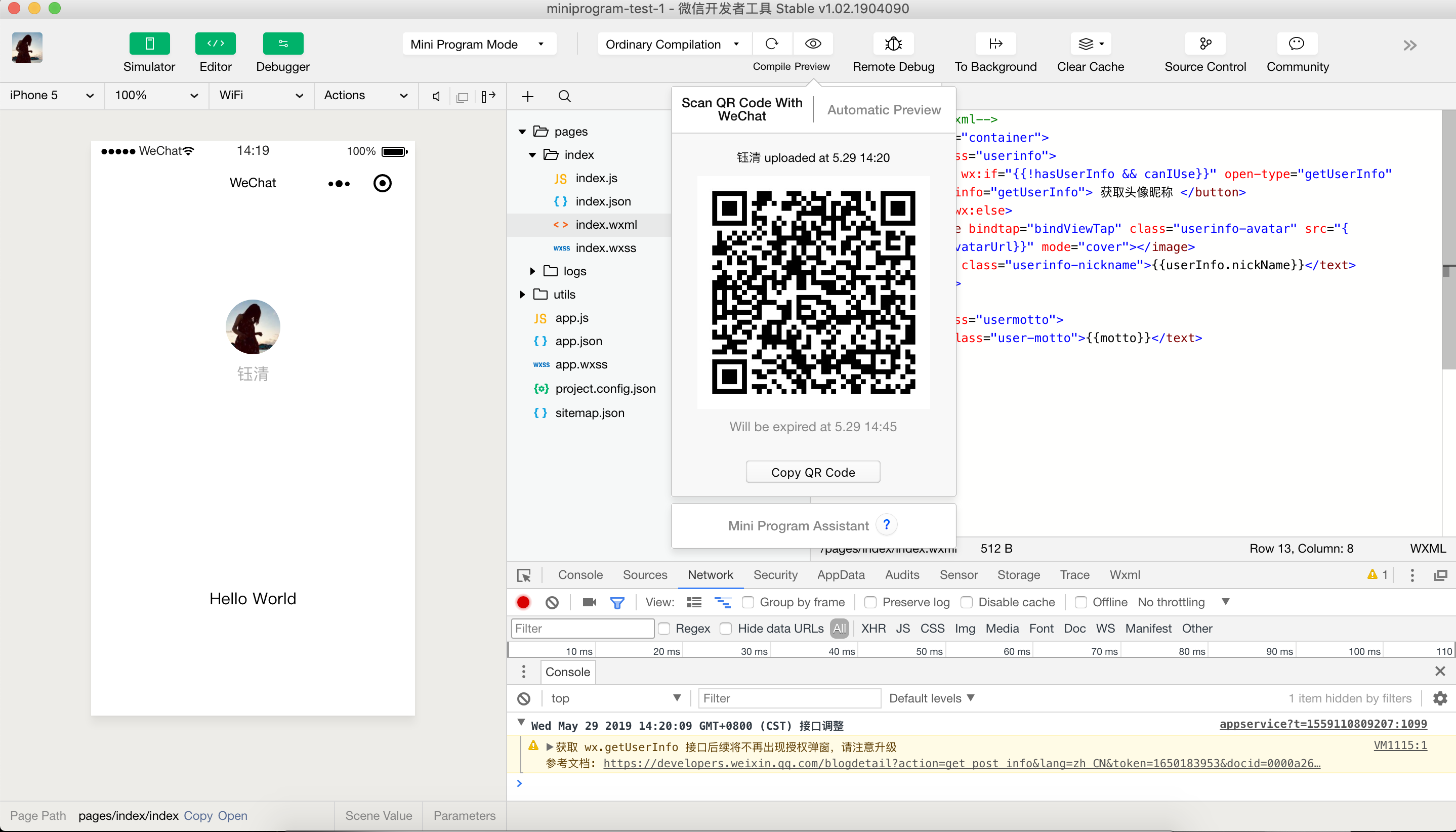 Now, you have a very simple running mini program. You can start to polish it by using the UI components and native APIs provided by WeChat. If you want to share your mini program to others for beta testing, you need to bind this project to a registered AppID, upload it to WeChat open platform and add the previewers as test users. When you are confident enough, you can submit this to WeChat for reviewing and releasing. After that, everyone can use your mini program.