#sitPOTT: Something with HANA and BEER

Finally HANA Express Edition 2.0 SPS04 is out and we can use the Graph Database Cypher language directly within SELECT statements. See end of updated chapter “Graph Database”.

I’ve promissed, that I will write a blog post and publish the data I’ve used. So here we go…

My session was inspired (among others) by my interest for Graph Databases. See also my blog post “Neo4a: The Neo4j ABAP Connector“.

For a session I held for my department a couple of weeks ago I’ve searched for a data model (other than the SFLIGHT) and hey, I’ve found the Open Beer Database. The model looked very promissing.

Unfortunatelly the data was quite old (2011) and a bit crappy, there where line feeds in the middle of texts and many not converted German Umlauts (you may know, that many of German breweries and beers have the ending “bräu”). I’ve cleaned up the data by hand (and some scripts) and uploaded the CSVs to my HANA instance. For some Polish cities I got some help on Twitter (thank you Witalij Rudnicki  et al.)

The data you can find on Github in my repository “HANAandBEER“. I’ve uploaded the (mostly) cleaned CSVs and a catalog object named CatalogHanaBeerDB.tar.gz.

If you have installed SAP HANA Express Edition or any other HANA 2.0 you can import the catalog object directly in the WebIDE. There’s no need to upload the CSVs separately. Also the Graph Workspace should already be created automatically:

(I’m using HANA 2.0 SPS3, so the screenshot may vary a bit in your system) 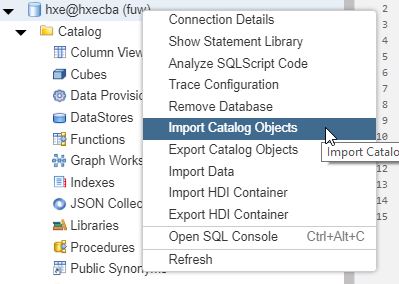 Choose the Catalog file, change the schema name if needed and import the data. 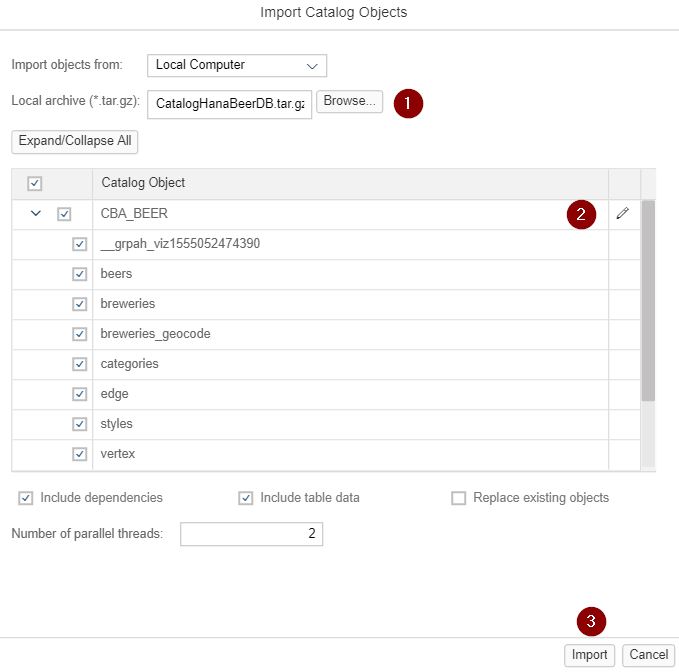 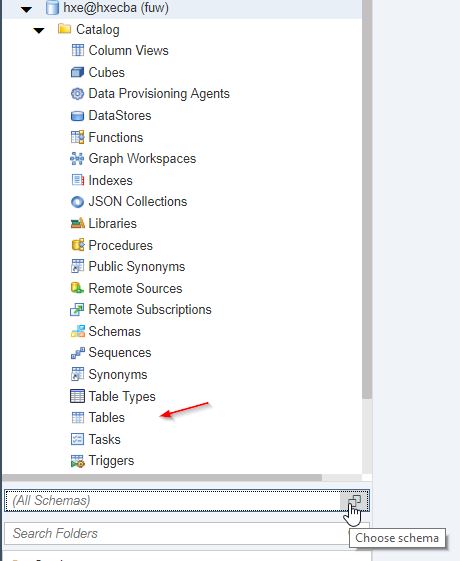 If the import went well, the tables and content should be loaded into the system.

For my demo in the session I’ve used some Cypher examples. Cypher is the open sourced language for Graph databases created by Neo4j.

First we have to open our new Graph workspace: 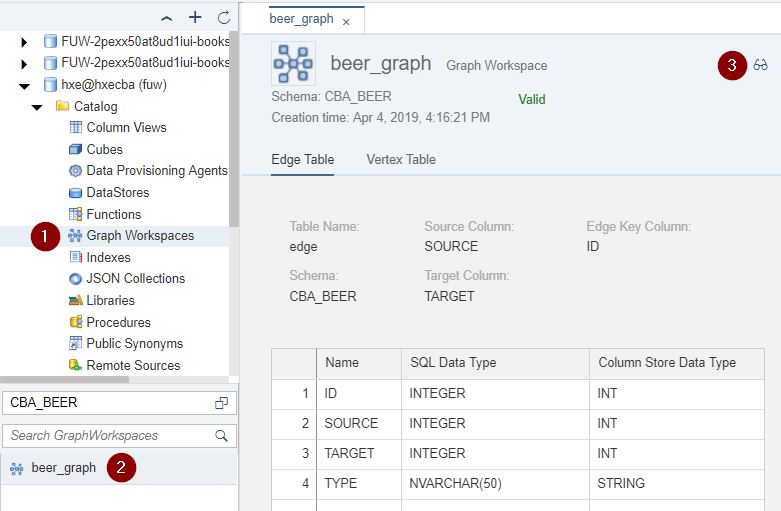 A sample of 200 objects are selected and shown. To better identify the objects and connections we have to adjust the settings a bit

Select NAME as Vertex label and TYPE as Edge label

Sometimes the settings are lost while working with the graph. In this case you have to repeat these steps (Hello WebIDE dev team, are you listening?). Also, if you go to the settings, the entered Cypher code is lost. So, if you are working on a larger Cypher code, copy the code to an external editor from time to time. 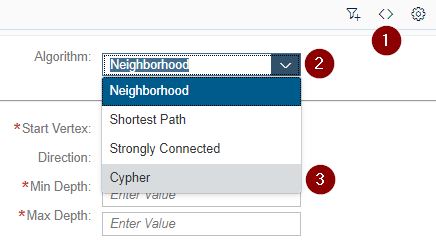 Select all beers of breweries which brew Altbier (obviously my favorite kind of beer, because I was born in Düsseldorf, the home of Altbier)

You will get a nice Graph with the result (cutout): 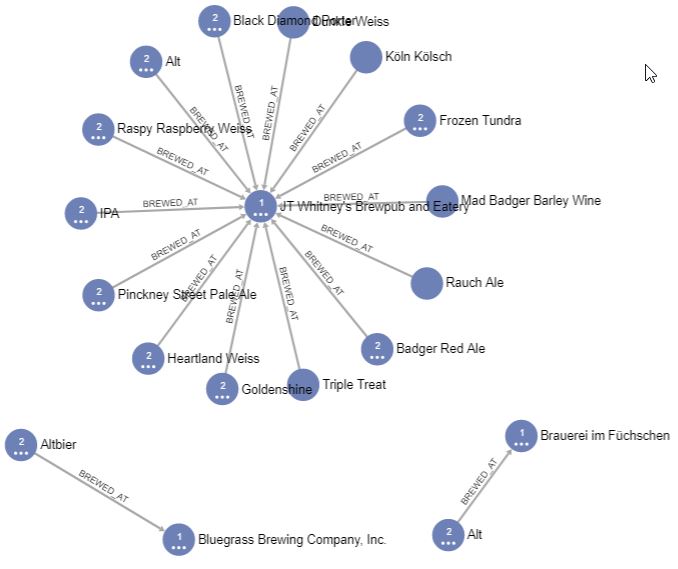 Or just browse thru the graph. Let’s start in Amsterdam.

After double click on Amsterdam, we see, that Amsterdam is a city in The Netherlands and has got two breweries: 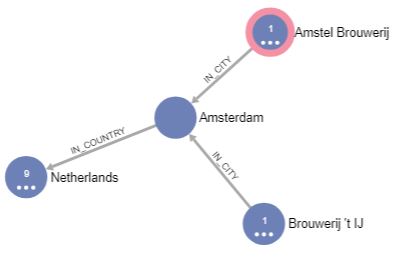 Hopping from one object to the next… 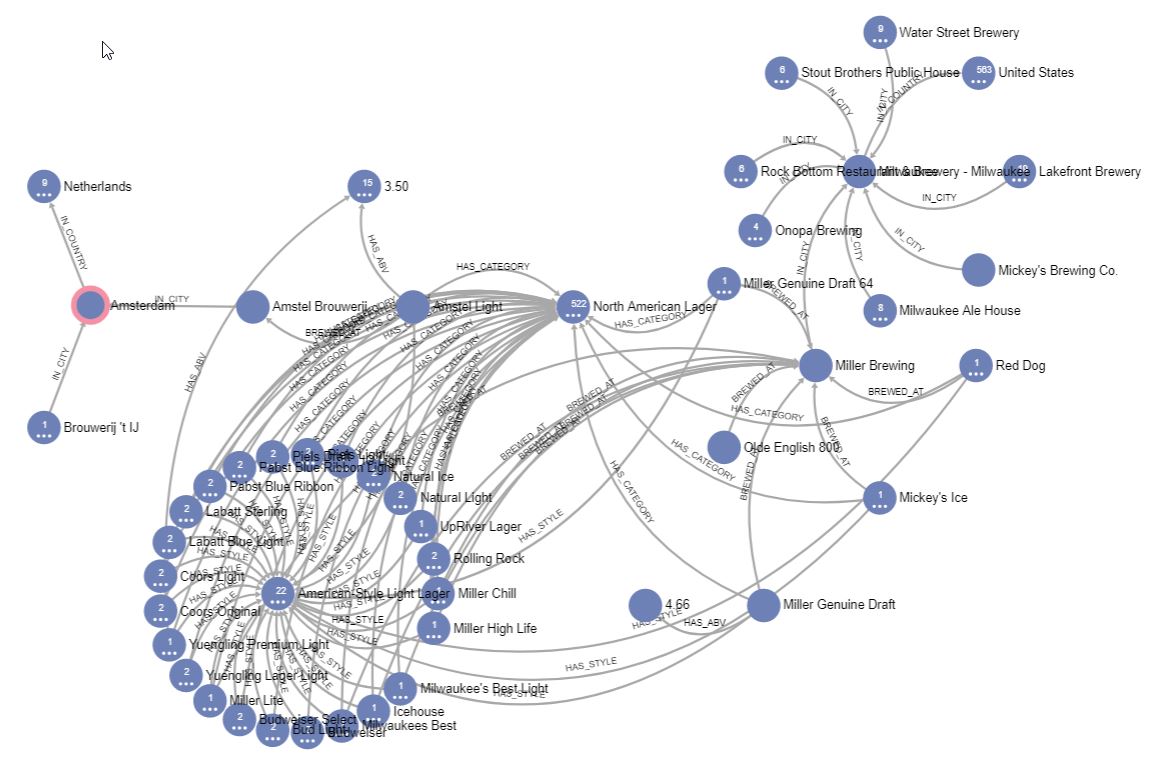 With HANA Express Edition 2.0 SPS04 we can user the Graph Database Cypher language directly within SELECT statements. You can enter the following SELECT statement in the SQL console (or in your ABAP program, see below):

Show me all beers of breweries, which also brew Altbier 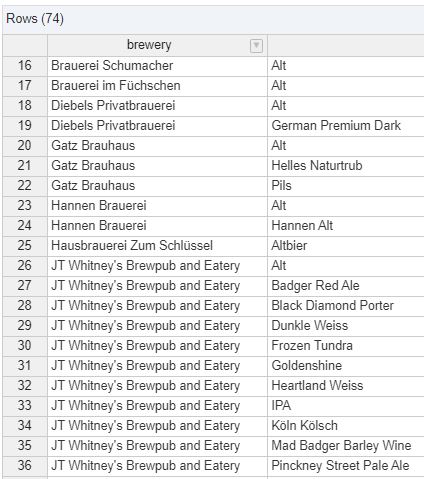 If you take a deeper look at the created tables, you may have seen, that in the table “breweries_geocode” I’ve created a column named “point” with the SQL type “ST_POINT”. In this column I’ve entered, with the help of an ABAP programm of course, the spatial coded coordinates of the breweries.

If we look at the raw data, we cannot see much… Using the function .ST_AsGeoJson() will return the point as GeoJSON. You can copy the created JSON into the clipboard via context menu.

To check the created GeoJSON you can go to http://geojson.io and paste it into the input field. As a result you’ll see Bolten brewery on the map. 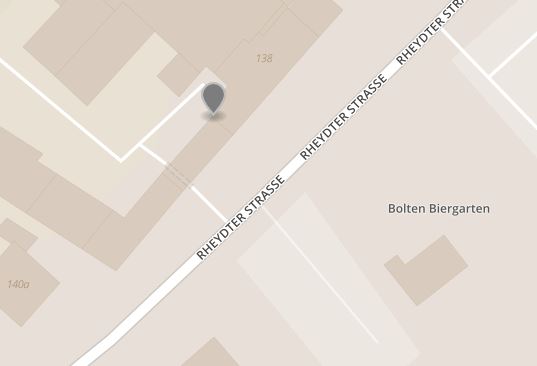 GeoJSON is a well known data format to describe simple and also more complex Geo data. You can, for example, download all the county bounderies of Germany from the “Open Data Lab“.

Combining this with another of my open source projects called “ZGeoJSON“, which includes already “LeafletJS” to visualize the data, you can create surprising apps in ABAP. And yes, this is really created in ABAP, with just a couple of lines of code…

Show me all breweries in a city 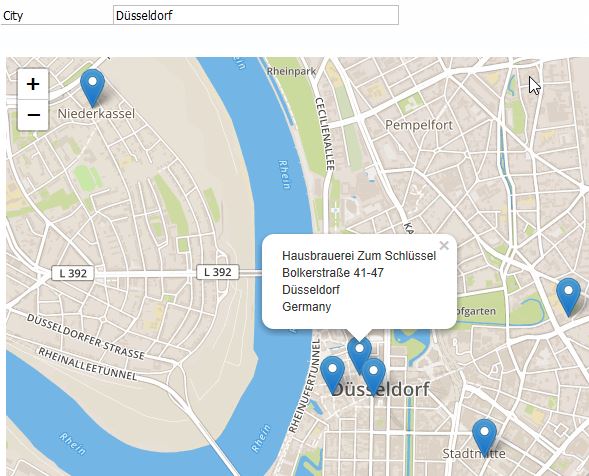 Show me the distance to the next Altbier brewery 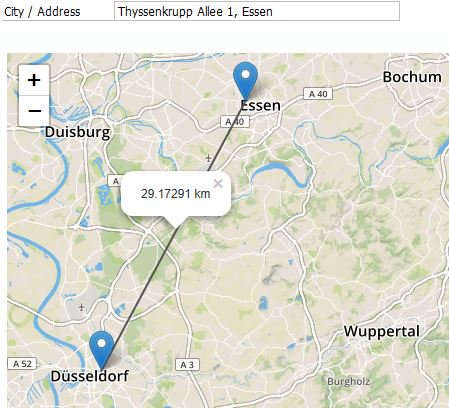 Replay of my session

thanks for sharing - that looks really cool (not only because of the nice business case).

Do you plan to somehow migrate your project to AMDPs according to the new option to define the Graph Workspace directly via AMDP?

would be happy to play around with the new Graph AMDP features I've learned at DSAG Devdays, but this looks like lots of years in the future for me. (or maybe this will be part of the Steampunk trial somewhere next year?)

But it would help me a lot already, if there would be finally a HANA Express 2.0 SPS04, where we could use Cypher within database procedures and call these procedures in ABAP.

as far as I understood, the feature is available On-Premise 1909. At least considering RAP, it looks like they first release their features in the Cloud before bringing it to On-Premise.

Therefore I would hope that it is also available with the trial version of Cloud release 1911 (as it is already available On-Premise at that point in time). But I am also curious, how the trial will look like in detail and which aspects it will cover. We'll see 🙂