With SLT, you can synchronize your business data in real time for your system landscape while keeping data transfer volume to a minimum. You can easily replace custom-built data synchronization applications with SLT and benefit from the tight integration with the SAP NetWeaver ABAP Application stack and data model (source: help.sap.com).

SLT triggers can be created on all tables of an ABAP-based source system. From an upgrade perspective, we’ve the following high-level table categories:

Example: A table has a database trigger and needs to be converted in the downtime, the conversion would fail if the database trigger is still there. Hence, the trigger must be dropped during the update procedure.

The following table lists all the phases with the information whether the phases are relevant for either the standard, nZDM, or DMO approach of SUM. Additionally, the last column indicates if you can ignore the error of the respective phase.

The first phase where SUM checks for active database triggers is called RUN_CHECK_SLT_TRIGGER_PRE. The check contains the switch tables. The main purpose of the check is to make the administrator aware of triggers that must be dropped later during the update procedure. However, for this phase the error can be ignored but it should be communicated to the responsible SLT Operations Team. Later on (when check 3 runs), the SLT Operations Team has to drop the triggers listed by the check phase. Hence, the team should get prepared for this task already.

The Software Update Manager checks again in phase RUN_CHECK_SLT_TRIGGER_DTTRANS shortly before the downtime. The list of database triggers that must be dropped is now complete: it contains the number of tables shown already in check 1 (RUN_CHECK_SLT_TRIGGER_PRE) including the tables handled in the uptime dependent on the selected update approach [standard, nZDM, or DMO] as well as the tables that have to be converted in downtime. As in check 1 the SLT Operations Team should be informed and be prepared for the next check. NEW: With SUM 2.0 SP05, this phase is ignorable as well. You can proceed to the dialog phase DOWNCONF_DTTRANS and keep the dialog until your cutover starts.

The final check phase RUN_CHECK_SLT_TRIGGER_DOWNTIME comes shortly after you’ve confirmed the dialog DOWNCONF_DTTRANS. The number of tables is identical with the tables listed in check 2 (RUN_CHECK_SLT_TRIGGER_DTTRANS). In this phase at the latest, the SLT Operations Team must resolve the errors. All listed tables are handeled by SUM in a way where the SLT trigger cannot remain on the table due to technical reasons. If the database triggers are not deleted, you will not be able to continue with the update.

In this case, follow the instructions of SAP Note 1620618 to delete the relevant database triggers. Create the deleted triggers again after the downtime. After the downtime is completed, an initial load of the affected tables is required. For the initial load, the SLT Cockpit is used.

Handling of SLT triggers with the standard approach

If you’re running an update using the standard mode, all three phases are running as visualized in the following graphic: 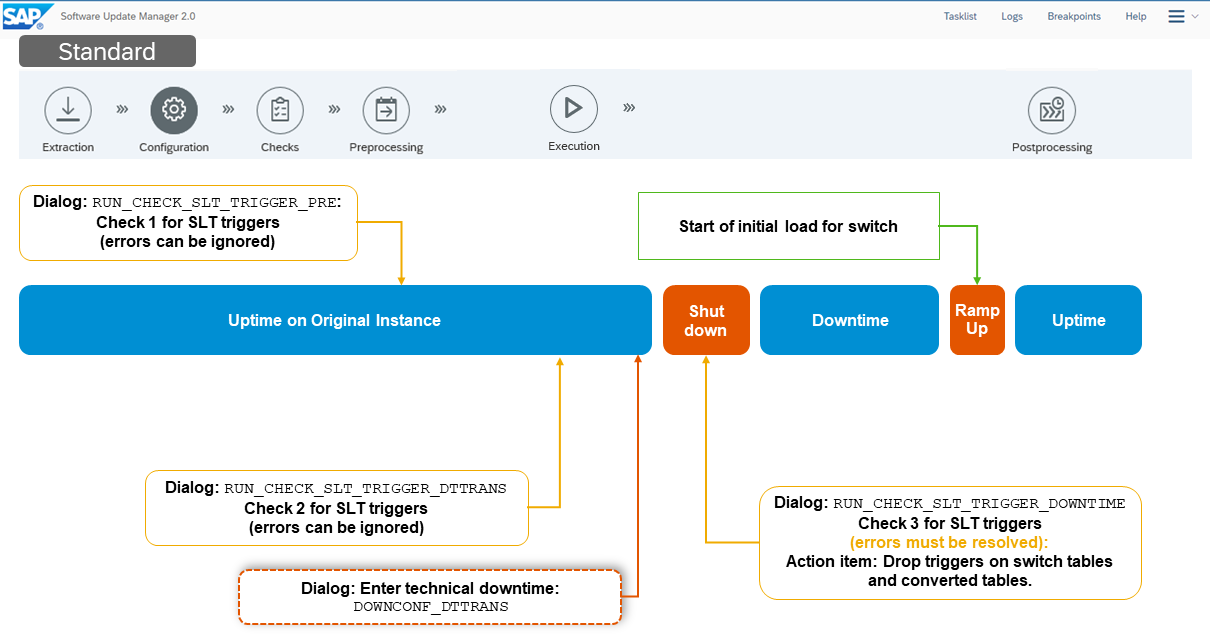 Keep in mind that an initial reload is needed for the tables where the SLT trigger was dropped.

Handling of SLT triggers with the nZDM approach

With nZDM (near-Zero Downtime Maintenance; for details, see SAP Note 1678564) potentially more table are handled in the uptime to reduce the technical downtime of the update procedure.

Like the standard approach, all three described SLT check phases are running when nZDM is used: 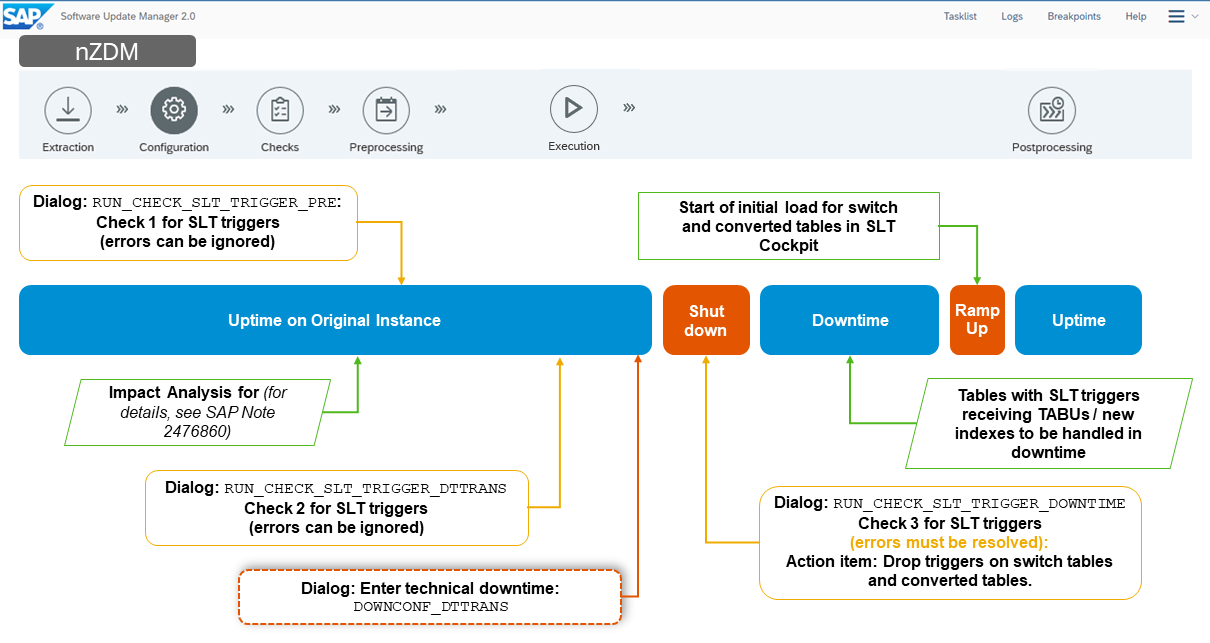 However, the strategy with SUM 2.0 SP05 and higher is to handle tables with SLT triggers in downtime dependent on the change to be performed for the particular table. Tables (smaller than isu_max_tab_size) with SLT triggers but receiving either a new index or table content (so-called TABUs) will be handled during downtime. Hence, an initial load after the update is not needed.

Another case would be tables that have to be converted due to structural changes. For those tables, an initial load is needed anyway. Therefore, these table are still handled during uptime. Here’s the decision tree on whether tables are handled in either uptime, or downtime:

However, if you want to force include tables with SLT triggers into uptime handling, you can do this by maintaing an entry in CRRTABLIST.LST. This feature is available since SUM 2.0 SP07.

If you need to include or to exclude single tables into or from the data transfer, proceed as follows:

Performing a DMO (Database Migration Option) is different from the SLT handling perspective since the target system runs on a different database. For this reason, no database trigger must be dropped on the source database and no SLT trigger check is running at all. The SLT replication can be kept active until you enter the technical downtime. After the DMO has been completed, an initial load is needed for all tables:

thumbs up - great help this blog-entry.

I have below query

apologies for my late reply. For some reason, I haven't been notified.