How Influential is SAP Customer Influence?

The SAP Customer Influence program, I believe, is a wonderful platform and an excellent way for SAP to understand what customers need and want in their product road maps. Customer Influence is used for various products within SAP, split down to a modular level for better focus on specific areas of the products. Not only is it a great tool for SAP, but also for customers who are interested in what seems to be important to other customers around the world.

If you feel that some sort of new or enhanced functionality within an SAP product would be of great value, you can log an Influence Request – this may then be considered in the future development of the product. In my experience, when one discovers a product bug, an unexpected gap or a frustrating limitation, you log an incident with SAP support. After investigation, there are times that the support agent suggests that you log an Influence Request, because the item you have identified is not considered by SAP as a bug, and therefore it should be a feature request.

Over time, I have monitored a few Influence Requests submitted by my customers and by the general community. At first, I was excited at the prospect of what I thought were great requests being considered in the SAP road map. I would monitor the status, and jump online when I received an email notification related to one of the requests. In all honesty I have felt a little disappointed at the lack of progress on the requests.

But, to avoid feeling sorry for myself, I assumed that the reason for the lack of progress was related to a lack of interest from other customers around the world. It is, after all, a platform to determine which requests generate the highest interest – this, so that SAP knows what to focus on next… There is a minimum number of votes required before a request is considered – which is why it’s important to promote your requests with other customers to get more votes. I understand this, and it makes perfect sense to me – it is sometimes a challenge to get the votes up, but I have found that if you personally let other customers know about the requests that interest you, then the votes can be gathered quite quickly. As a side note, keep in mind that each company only gets one vote counted – even if ten people at that company vote for a request.

I started noticing something strange though – I would find requests that had been logged as far back as 2016, had over 40 votes, and were still sitting in the “acknowledged” or “submitted” status. In fact, as of date of writing, there are requests with over 50, even up to 83 votes that are still waiting to have a decision made – over two years later in some cases.

I decided that I wanted to see, based on statistics, how influential the SAP Customer Influence platform really is. If SAP support agents use the Influence platform and concept to disarm a customer who is upset with what they see as a bug, as an obvious requirement, or as an imperative feature, then it’s important to understand what the chances are that a new request will actually be delivered, and in what time frame.

To avoid making general assumptions or diluting the statistics, I will focus on an SAP product that I have been deeply involved with over the past few years – SuccessFactors. My focus is more on the integration between Employee Central and SAP Business Suite, but for the sake of completeness I have broadened my analysis to include the entire SuccessFactors suite. I have also excluded all requests marked as duplicate, merged or as already offered.

Here is a view of all SuccessFactors Influence Requests submitted since 2016, by module: 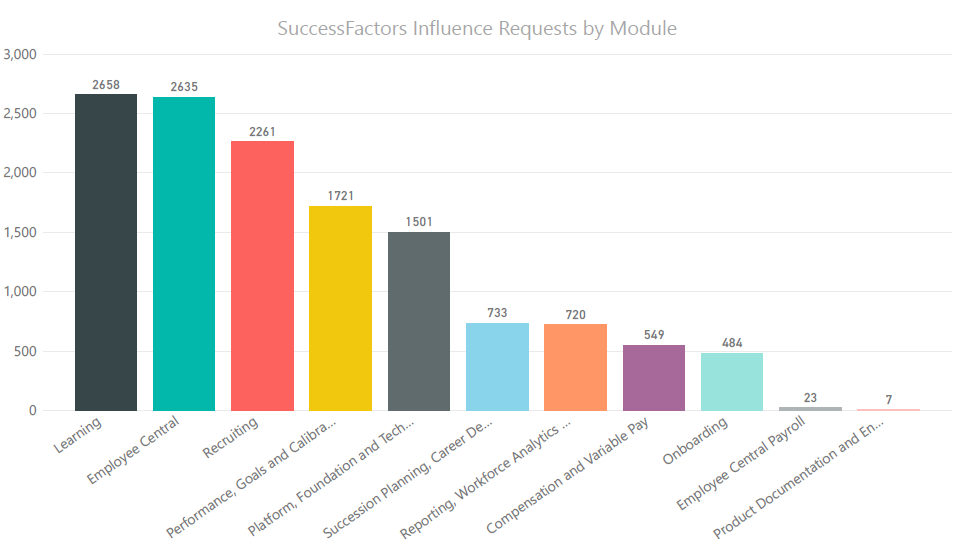 While the above graph is interesting, it isn’t all that useful – we can make some assumptions from it, but ultimately there are many influencing factors that could arguably throw out any assumptions made. I wanted to break this down to a point where I can see real facts.

Here is a view on Influence Requests submitted by year, showing current status: 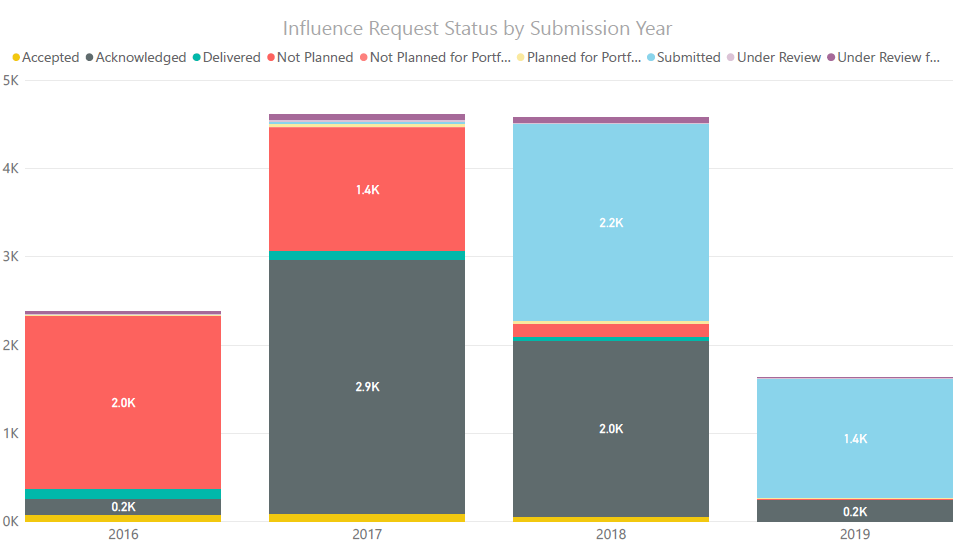 Since 2016, 13 976 requests have been submitted. 257 of these have been delivered by SAP – that’s 1.8%. These stats were quite an eye-opener for me – I’m not sure if I was being naive, but I expected that a much higher percentage of requests would have been delivered. I was confused at the fact that only 18.3% of delivered requests actually had the required minimum 10 votes. 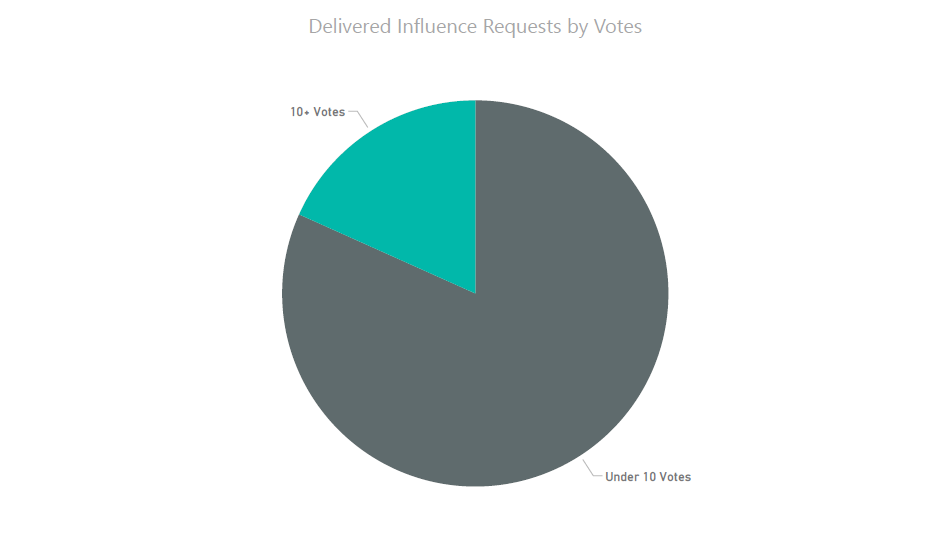 It was surprising to me that it seems that SAP does not take the number of votes into account when deciding on which requests to deliver. This is illustrated by showing all requests submitted since 2016, which have at least 10 votes, along with their current status: 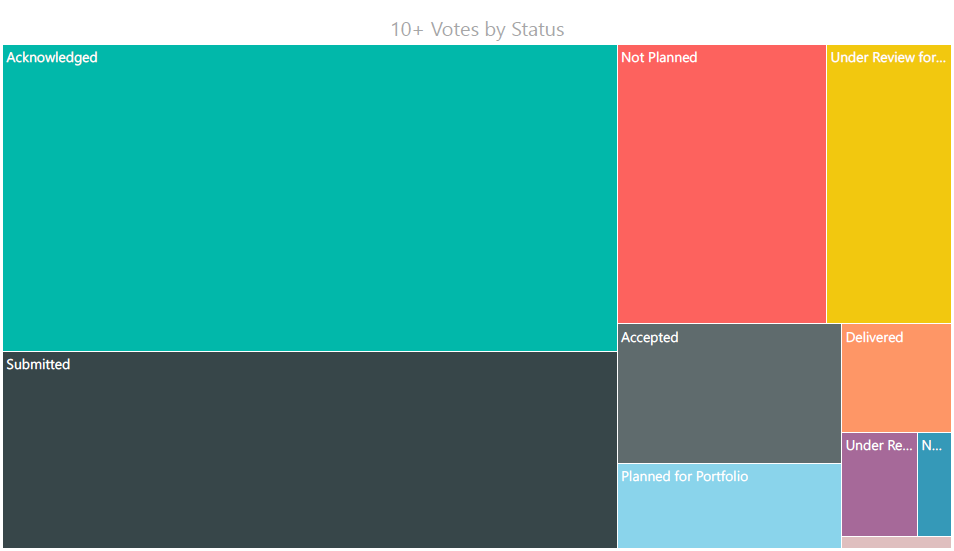 As you can see, out of all requests with the minimum number of votes, a very small number of these have been delivered, or are planned in the coming few years. The vast majority are sitting under the “Submitted”, “Acknowledged” and “Not Planned” status.

I know that SAP cannot possibly deliver on all of the submitted requests, but looking at these statistics, it tells a compelling story. The message I get from the numbers, is that if you log an Influence Request for SuccessFactors, and get the required minimum 10 votes, then you have a 0.34% chance that SAP will deliver your request. A sobering thought.

Finally, I wanted a view of how long it takes for a request to be delivered. To do this I had to make some assumptions which might not be 100% accurate… For all delivered requests, I measured the time between when a request was first submitted and when it was last changed. After doing some spot checks, it became clear that there are many requests marked as “delivered”, when they should have been marked as “duplicate” or “already offered”. This will unfortunately distort the results and reduce the average delivery time. I wasn’t about to evaluate each request individually, so I have left it as is. Here is a view of how long it has taken to deliver requests, by year submitted: 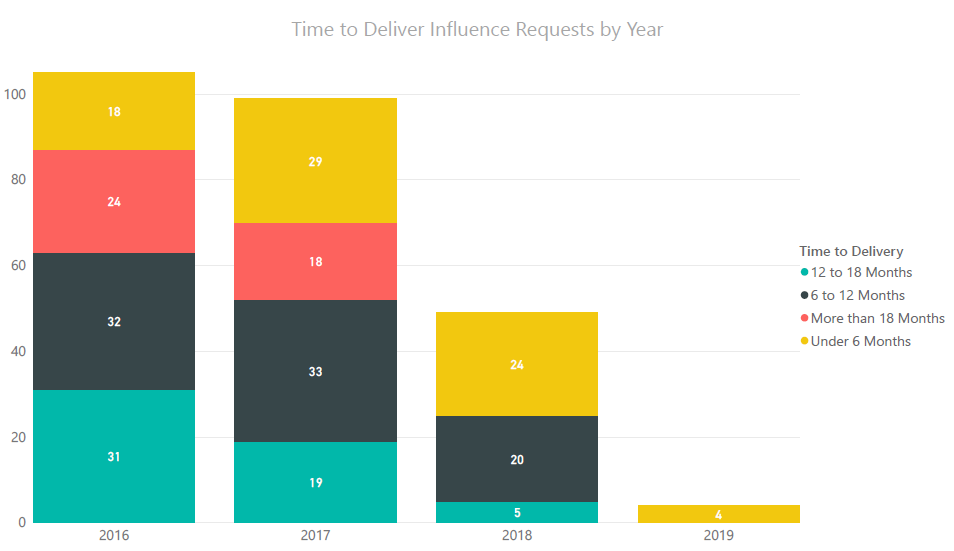 My analysis of the numbers leads me to the following conclusions:

A common response to questions about missing functionality in an SAP product is to log an Influence Request. The same applies when SAP sales team members speak to prospective customers, and promote the Customer Influence program. This gives the impression that it’s an effective way of influencing the development road map. Based on the statistics, I believe this impression is misleading.

I love the idea behind the Customer Influence program, but looking at the reality of how it has worked over the past few years, my enthusiasm is being dampened. My hope is that SAP will perhaps review the statistics and measure themselves accordingly, in order to improve what seems a very bleak rate of delivery, and a very low level of “real” engagement with their customers (i.e. taking votes into consideration, as opposed to ignoring them).

SAP offers a solid platform for customers to influence development road maps. Customers are clearly using the platform and spending a significant amount of time on it, presumably with high hopes of having their requests being implemented in the near future. What seems to be missing is the link between this amazing platform, and the execution of road map influence relative to customer votes.