Earlier this month I attended SAPPHIRENOW and ASUG Annual Conference as part of SAP’s Blogger program. It was a good opportunity to touch base with SAP and their leadership teams after the recent changes in personnel, the Qualtrics acquisition and the associated shifts in focus and strategy.

There were lots of interesting ideas, topics, etc. discussed formally and informally throughout the week but the one I kept returning to was “Integration”.

The day prior to the conference I took part in the SAP Global Partner Summit. During the Opening Keynote SAP Executive Board Member Adaire Fox-Martin was asked what she saw as the biggest challenge SAP faced. Her answer was concise – “Integration”. Click on the video below to see the full question and answer.

Although not addressed directly in his SAPPHIRENOW Keynote Bill McDermott also mentioned integration several other times during the week.

About 2 years ago – maybe a bit more – SAP finally got the memo and accepted that SAP-to-SAP integration is SAP’s problem. In some respect this was an acknowledgement of a customer pain point and a willingness to address it – but it also makes strategic sense given SAP’s cloud ambitions.

Arguably SAP has a differentiating position in the enterprise software market because their software touches all parts of the enterprise. Most of SAP’s cloud competitors have established capability covering one or two lines of business and are aiming to extend out from there. SAP currently offers solutions that cover the complete enterprise – but a true “cloud” offering should be a single solution spanning all LOB’s rather than multiple solutions cobbled together. At least it should appear that way to their customers. 😉

Last year SAP announced Master Data as Service(MDaaS – my abbreviation not SAP’s). The goal of MDaaS was to have master data managed in a cloud service that could then be consumed by any number of applications – both SAP and non-SAP – to ensure a “single version of the truth”.

At the time SAP said they were starting with Business Partners (think Organisations, People, Customers, Suppliers, Employees, etc.) and Product Masters (think Products, Materials, etc.). Their aim was to deliver those two services before the end of 2018, with others to follow in 2019.

This is a big job. Step one is to come up with a universal data model covering the master data objects that takes into account all the requirements of existing (and future) consuming applications.

Despite the scale of the task SAP announced the GA release of SAP Cloud Platform Master Data for Business Partners 1.0 on 5th November 2018.  A GA release is an important milestone because it doesn’t just mean the product is available it also means it has successfully passed some well defined benchmarks during a customer beta phase. Subsequently version 1.1 was released during Q1 of 2019.

*Note – there is no sign yet of SAP Cloud Platform Master Data for Product Masters. 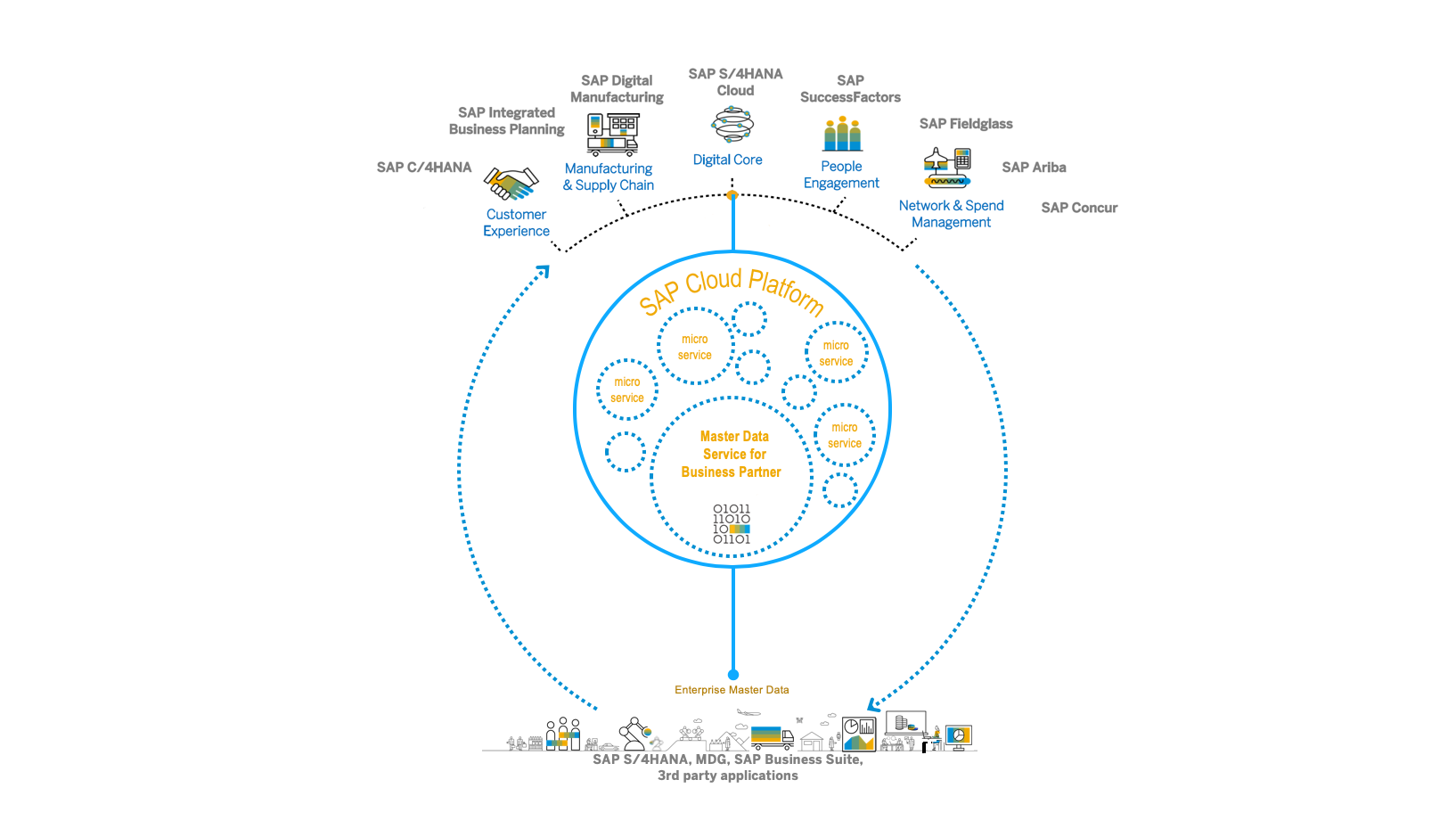 This seemed like a good start so I was keen to find out more – however it seems that MDaaS is one of those things SAP has revisited recently so things are a little “up in the air”. ¯\_(ツ)_/¯

It appears to me that the MDaaS initiative has been restarted. It is hard to figure out why this has happened but the best explanation I heard was that the work was being done in several silos and it was felt it should best be placed under a single area. This makes some sense because organisational silos have been a challenge for SAP for as long as I can remember.

I learned that SAP are now focusing on the top eight (I think) business objects and are close to completing the data modelling work mentioned above for each of those eight scenarios.

My presumption is that the Business Partner and Product Master data modelling work done last year would have been valuable input into this process but my impression is that a completely fresh look is being taken at those two business objects as well.

Personally I am happy if SAP need to revisit earlier work to get this right – because I see MDaaS as the vital piece of architecture and technology that will allow SAP to deliver on their promise of owning the integration issue. And if they can do that they will truly be able to offer customers a single solution for the entire enterprise – customers simply choose the “modules” they want to subscribe to.

Why so? Well first I would ask you to try to discard any thoughts you have about replicating master data from a MDaaS into your applications. That would just be adding one more integration challenge to the pile. Rather think about refactoring all your applications so they consume master data via standard APIs.

If I have an on-premise edition of S/4HANA I may choose to provision my Business Partner master data in my S/4HANA system – but I could equally choose to provision it on SAP’s MDaaS offering. This choice would then be reflected in system configuration tables – not code – because both options would use identical APIs. The only real difference would be the service endpoint.

Last year I shared my killer integration demo idea with Bjoern Goerke – and I did so again this year with Jan Schaffner who heads up SAP’s Central Engineering team. It goes something like this….

I think that would be a very powerful demo. Especially if it only took five minutes. Especially if the UX completely hid the backend “modules” being consumed from the user and simply surfaced new functionality as the subscription details changed.

I don’t expect it this year because – as I said earlier – it’s a lot of work.