This is a recap of the session “Troubleshooting Node.js applications: Debugging in SAP Cloud Platform Cloud Foundry” that took place in a recent SAP Inside Track Belgium 2019 event.

Slide deck of the session is available at SlideShare.

When debugging applications and using breakpoints, a developer employs a traditional forward debugging technique when following program flow and stepping through executed statements. There are times when a breakpoint is set too late in the debugged program, and by time the program reaches the breakpoint and program’s execution is paused, a code snippet that could have caused a bug, is already missed. Usually the developer terminates current debugging session, sets a new breakpoint earlier in the program and repeats program execution with conditions that would lead program flow to hit a newly set breakpoint. The program reaches a new breakpoint, program’s execution is paused, and the developer gets back to debugging.

Alternatively, it is also common to set a breakpoint early in a source code of the program, but there is a risk of setting a breakpoint too early and facing necessity of stepping through executed statements for a long time until an appropriate code snippet is determined.

Both approaches of a forward debugging technique described above can contribute to increased time required by the developer to get to a root cause and pause execution of the debugged program at a code snippet that causes an issue.

It would have been convenient to be able to revert execution of the program from a breakpoint where its execution has been paused and take several steps back to analyse earlier state of the program. That is exactly a purpose of an alternative debugging technique – reverse debugging or time travel debugging – that will be discussed in this blog and that will be applied to a Node.js application.

Sounds wonderful, isn’t it? There are certain technical obstacles that get on the way and prevent advancement and wide adoption of this technique – most remarkable and significant are following:

When it comes to JavaScript engine in general and Node.js in particular, probably most commonly referred and used implementation of time travel debugging system that has gained popularity in Node.js ecosystem, is based on usage of:

Alternatively, arguments and parameterization that are required for usage of time travel debugging functionality in Node ChakraCore, can be provided manually when starting the Node.js application or composing debugging configuration for it.

Note that default Node.js runtime that is based on Chrome V8 JavaScript engine, currently does not provide support for time travel debugging.

In sake of simplicity, following debugging demo is conducted in a local environment. The debugged Node.js application has been launched using debugging configuration mentioned above, and when the breakpoint has been reached and program flow has been paused, it can be observed that a debugger got several new buttons that are a part of a time travel debugger and are used to perform reverse step and reverse step dynamic operations. Reverse step operation is used to navigate to a previous step in the current frame, whereas reverse step dynamic is used as an opposite action to step into functionality in a traditional forward debugging technique.

When using a time travel debugger in Visual Studio Code, it is possible to choose between forward debugging the program or switching to Time-Travel Replay mode and analyzing the program state based on collected snapshots, including possibility to step back to previously executed statements: 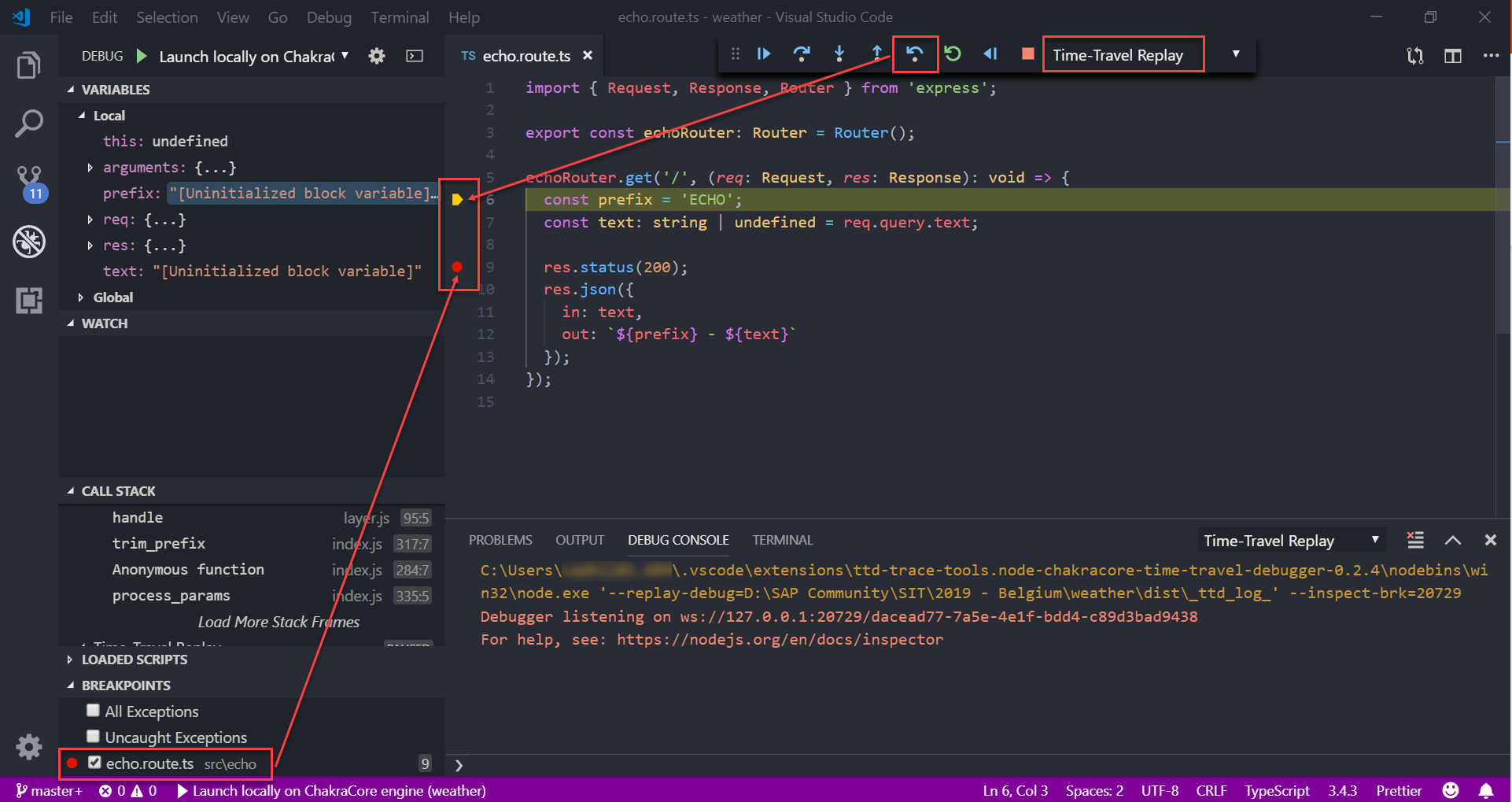 Stepping back through recorded snapshots can be conducted even if the debugged program has already crashed or has been terminated.

It is possible to download required Node.js runtimes and switch between them using interactive interface of the tool, or to utilize corresponding commands and handy shortcuts:

When switching between various Node.js runtimes, we can still make use of Node process attributes to check further details of JavaScript engine and Node.js runtime that are currently used: 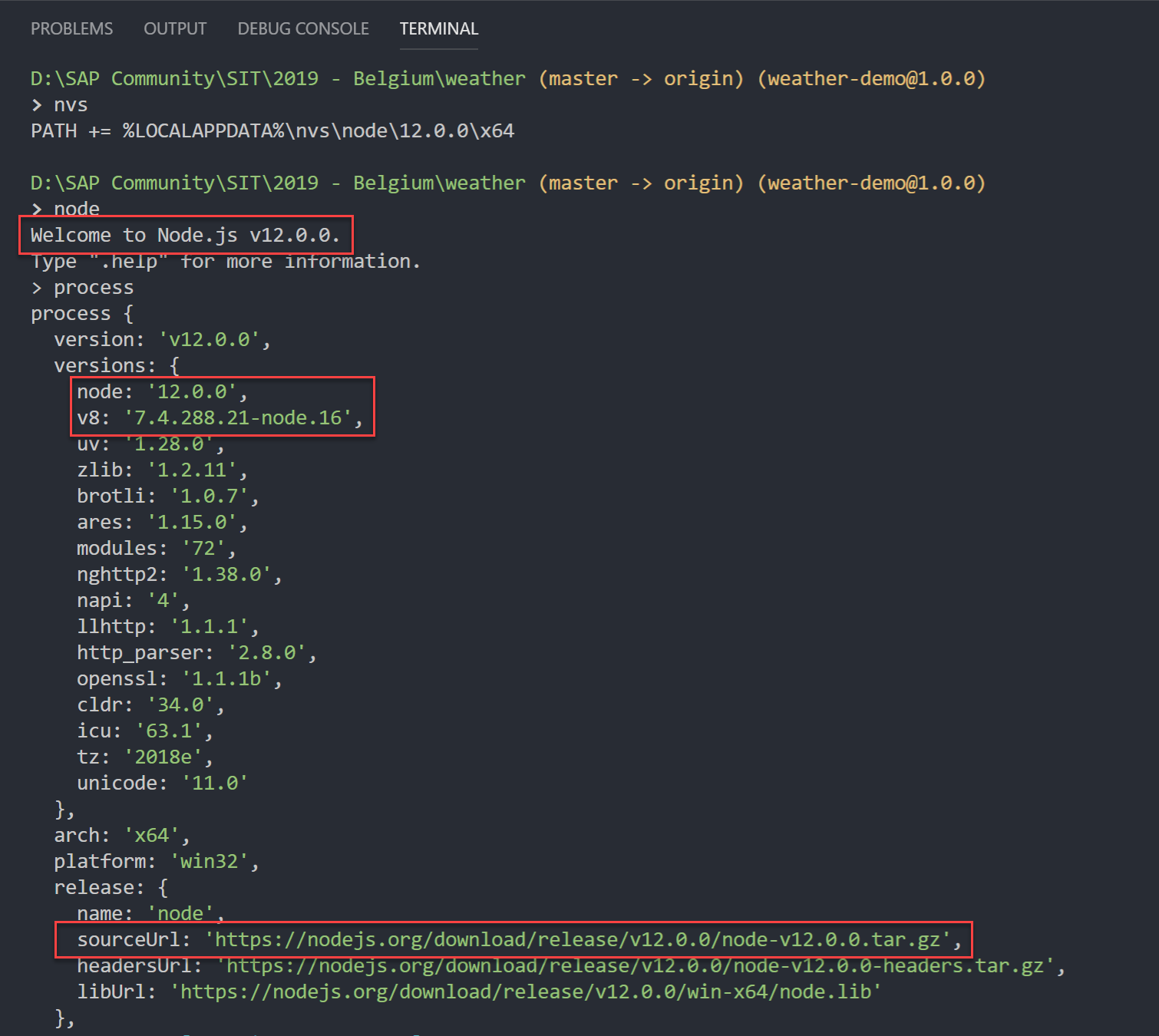 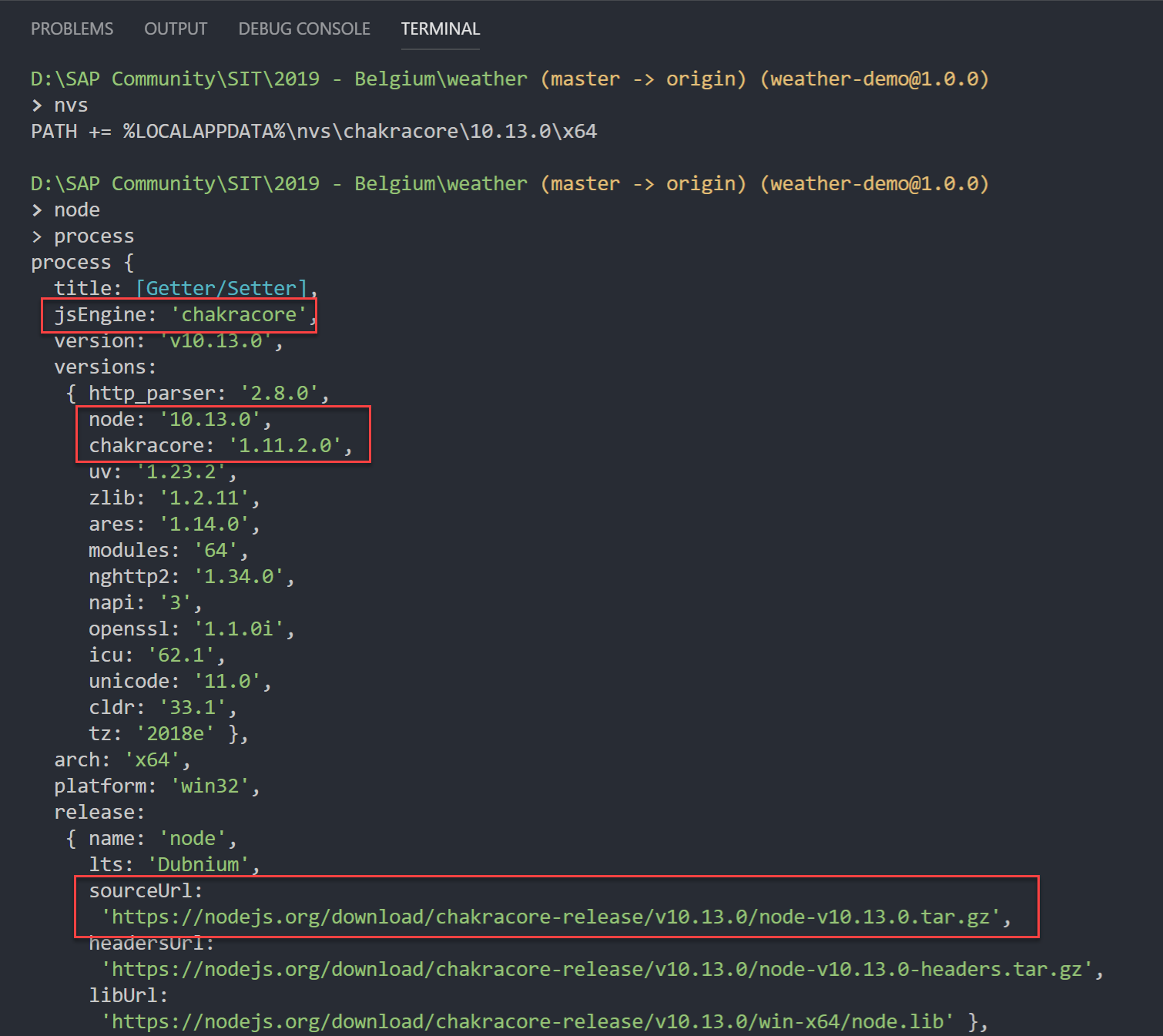 I assume this was run locally. One can probably run Node ChakraCore on a private CF instance, doubt you're allowed on SCP

Yes, you are absolutely right: this part of the demo was conducted in a local environment.