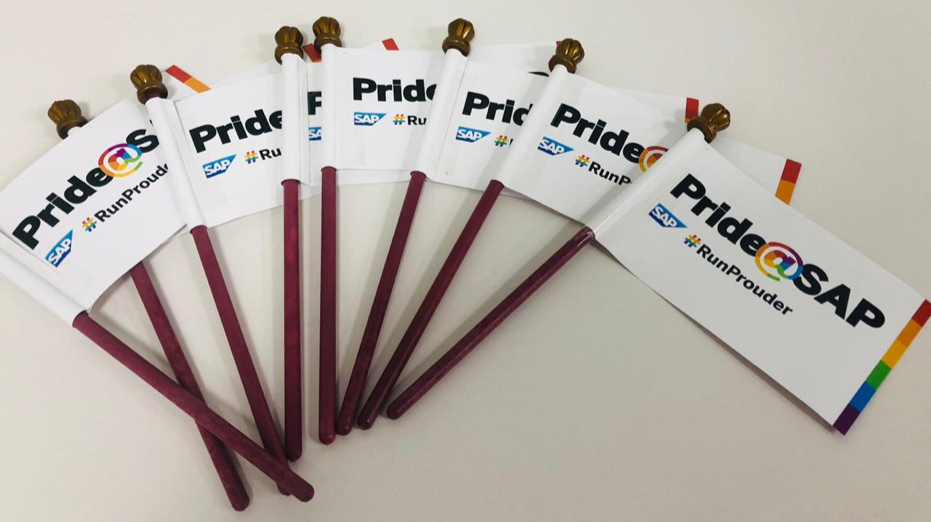 The experience of being left out is not unique to anybody. At one stage or another most of us have felt what it’s like to be left out. To imagine such instances stemming at a workplace for any reason at all is irksome, but to learn that an individual’s personal life forms the basis of the bias is extremely disheartening. Pride Circle is an initiative that aims to tackle one such issue head-on. Started by Ramakrishna Sinha and Srini Ramaswamy, Pride Circle aims to bring diverse stakeholders under one roof for an open conversation. Today, Pride Circles are held across the globe. 2019 May’s Bengaluru edition was hosted by SAP Labs India.

Shraddhanjali Rao, Head HR, SAP India, welcomed the gathering and kick-started the open conversation by sharing an anecdote from her own life. Daughter of a conscientious Indian Army Officer, Shraddha is the youngest among her 5 sisters. While generally well-behaved, Shraddha was rather bratty with her mother one evening. She was creating havoc for her mother, who was trying to tie a ponytail for her. Exasperated by Shraddha’s antics, her father cut her hair to half its length. This action led to Shraddha becoming the only girl with a bob cut in her entire school. Though initially hesitant, Shraddha grew fond of her new hairstyle. Yet, whenever she met her friends and family she endured and begrudgingly agreed with their comments – “You’re so beautiful! if only your hair were a little longer”. She shared how this pseudo-reality impacted her and emphasized how someone from the community must feel to live in projected reality. Shraddha also highlighted the role of an ally. She spoke about the wonderful feeling of having someone speak for you in a room. Shraddha sees allies as the bridge between the LGBTQIA+ community and the society at large. She finally left everybody with one thought – “Can we let everybody be who they are? Imagine How amazing that would be!” 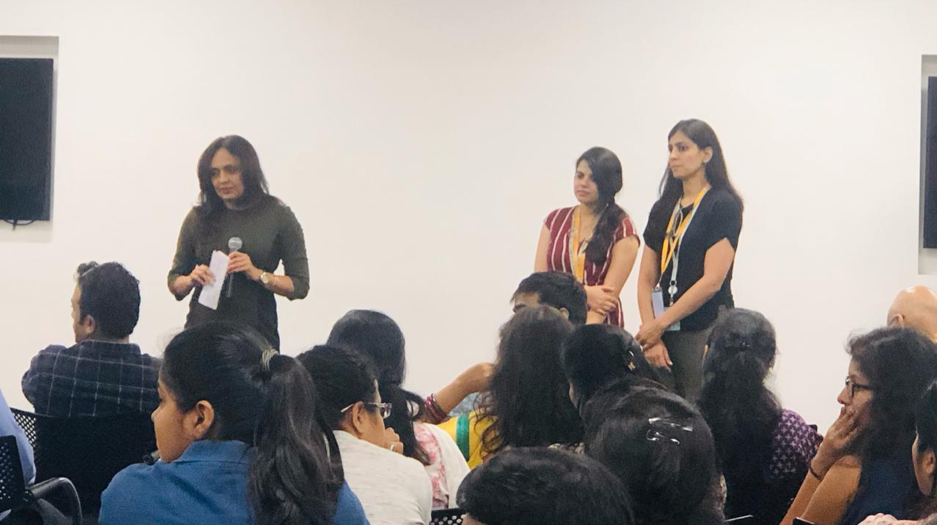 Sahana Shetty, HR Leader – Technology, ANZ, shared the efforts put in by her team at ANZ to support the community. Working in the banking sector, Sahana explained how Diversity & Inclusion is a tenet and a core principle. Determined by this belief, the team set out to work and formed a steering committee with members coming from various lines of business. The committee contemplated on the approach to be taken – “Should we first hire people from the community or should we fix our internal policies?”.  Driven by a genuine desire to build an inclusive culture, they decided to do both. They identified that to get the ball rolling and get substantial work done at the ground level there was a need for “do-ers”, not thinkers. Each individual from the steering committee took up a task and drove it passionately. They divided the committee into two – one section to work on the internal policies and systems and the other to work on hiring people from the community. The recruitment team set a target to recruit a specific number of people from the community. The team aimed to meet the target without comprising on the requisite skills for the job. They hired 6 people from the community out of which 5 were from the transgender community. Understanding the pain of furnishing government attested documents, the recruitment team also played the role of an interface, ensuring that the new hires feel safe and protected. Internally, the steering team sensitized the team onboarding the new hires. Additionally, they sensitized the members from the facility in their native language to ensure that all bases were effectively covered. The team also worked on internal policies such as same-gender partner medical coverage and housing assistance. Sahana and her team have also accounted for the aspirations of the new hires from the community, i.e., the team hasn’t hired people just to preach a message, but to bring in people with a fresh perspective and support them in their career goals. The two takeaways she wanted the participants to hold on to were – Make inclusion a part of our DNA; The drive from a recruitment team yields extremely positive results. Sahana was joined by her two colleagues, Tasneem Nagaria and Shagun Ganapathy, from the steering committee to answer the questions raised by the members in the crowd. 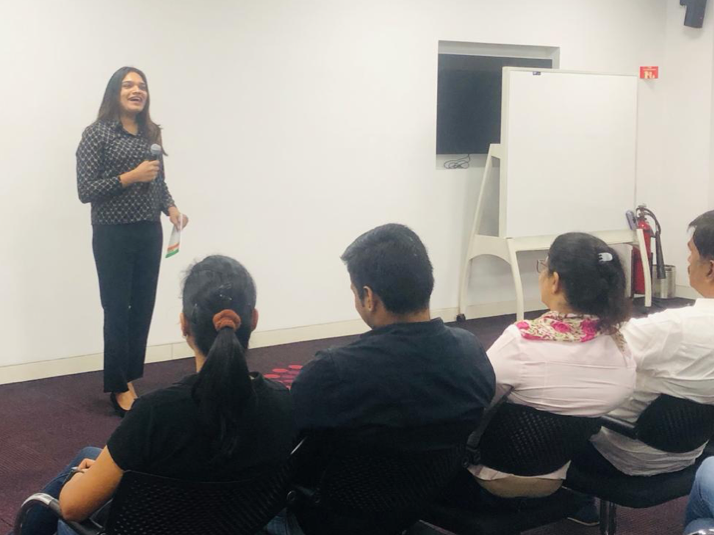 Sukanyeah Krishna, Rights Activist, Amnesty International, came next to share a deeply personal story. Sukanyeah’s story begins even before she was born. Her Grandfather was told that the child to be would bring a curse upon the family. Born to a god loving family in a small town located in Kerala, Sukanyeah always felt out of place. She knew that she didn’t conform to the traditional norms that applied to most of her peers. She was unable to identify the cause because of her lack of exposure to a world outside her village. She was constantly undermined, sniggered at and asked to free the family of her cursed life. Dealing with such struggles lead to physical manifestations which encouraged her parents to parade her from doctors to godmen. Sukanyeah’s strength emboldened her to endure life’s hardships, but there came a breaking point in her 10th standard. 10th standard is an extremely important academic year for students in India. In addition to dealing with the immense exam-pressure, Sukanyeah was dealing with injected hormones. Her parents took Sukanyeah to a doctor who attributed the cause for her “complications” to a hormonal imbalance. Sukanyeah’s parents kept this information from her, further leading to her frustration. The exams and injected hormones took a toll on her, leading her to faint at the end of the first Board examination. By the time she regained consciousness and was discharged from the hospital, the remaining Board examinations were over. Having reached a breaking point and not wanting to tolerate such atrocities anymore, Sukanyeah made a break for Bengaluru. It was in Bengaluru that she met people who gave words to her experience. She understood the definitions of LGBTQIA+ and identified herself as someone from the community. Having overcome her past, Sukanyeah gave herself 3 years to get her life in order. She started focusing on her talents and discerned web-development as a skill. Rejected by nearly 75% of the companies, Sukanyeah did not lose hope. She took matters into her own hands and started doing freelance work. Today, she owns her own company that has a factory in Bengaluru and has acquired a couple of other companies. Sukanyeah was the first person in India to undergo gender re-alignment surgery with financial aid coming from medical insurance and bank loans. She is also among the first 8 voters from the transgender community to cast a vote in the India legislative system. Going forward, Sukanyeah wants to help the community; she wants to slowly transition from a corporate setup to a job that allows her to enhance and support others from her community. From arriving in Bengaluru with not a penny to her name to turning her life around, Sukanyeah’s story is one of resolve and determination. Her story has been featured in BBC News and will soon be on the big screens. 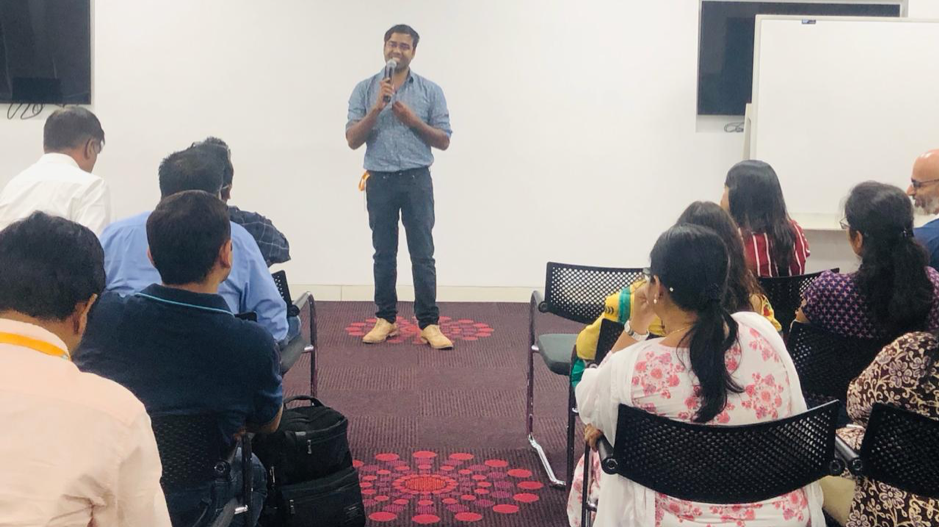 N Ram, Co-Founder, Pride Circle, came after Sukanyeah. He held an interactive session on Tolerance, Acceptance, Advocacy. Ram started by talking about exclusion and how it is common to everybody. He then quizzed the crowd on what they believed to be the cause of excluding people from LGBTQIA+ community. The gathering engaged in the question by sharing their views which covered a broad horizon. Through this exercise, Ram was able to ascertain that all of us have the ability to empathize with someone from the community we just need to understand that a life that is different from ours is still legitimate. Once you are at this stage of tolerance you can move on to acceptance. How does one begin to accept? Ram elaborated on this by conducting a mini-workshop. He asked all the participants to think of one thing that (s)he could do to move the needle just a little bit in the right direction. He asked people to focus on things that can be done by people in the scope of their own life. Again, a whole lot of ideas and suggestions were put forth by the attendees. Ram assimilated all the thoughts in the room and gave one concrete step that can be done – find a commonality. Find one common aspect that allows you to talk to someone and form a foundation. Further, you can read accounts of people from the community and engage in introspection. Finally, once you understand and accept this reality you can advocate this message to others based on your passion and bandwidth. 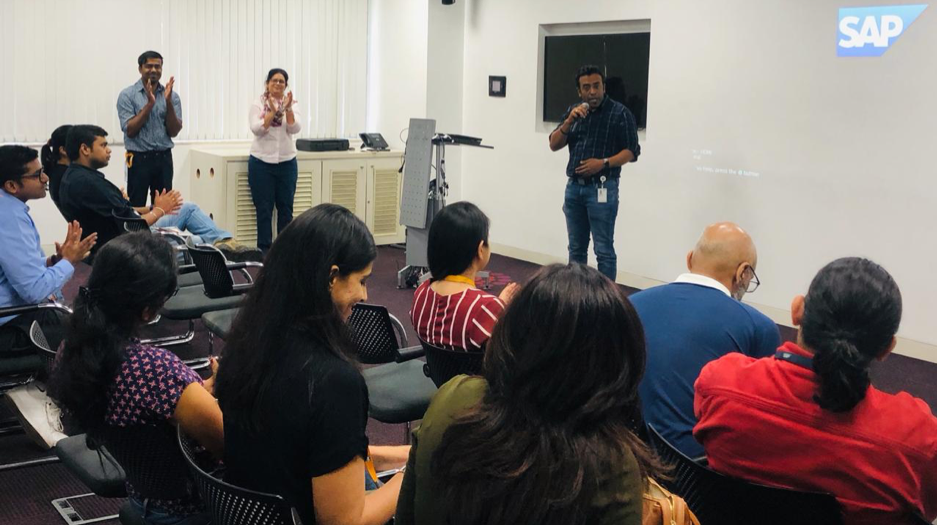 Mayank Bhatnagar, Diversity & Inclusion Lead, SAP Labs India, delivered the closing note by thanking the speakers for sharing their personal accounts and inspiring the crowd. He also thanked the attendees for attending the event and setting a foot forward in the right direction. Finally, Mayank thanked the entire team of allies that put the event together and invited everybody to network and share stories over high tea.

If there was an underlying theme during the event, it was that of Inclusion. The world is a much nicer place to be when we get along with one another. As human beings we are often at our finest behavior at business, so why not include a facet to our presence at the workplace and work towards creating an environment that can become a catalyst for social change. Signing off with a few messages from the attendees to the community… “We are less when we don’t include everyone”

i attended the meeting and it was influential and impactful

Thank you so much Chandramohan Sankaran.

It indeed was a wonderful event.

Proud of your contribution to diversity!

Congratulations! It's great to see this happening.