With those questions, let’s start from harmonization of site master and business partner. 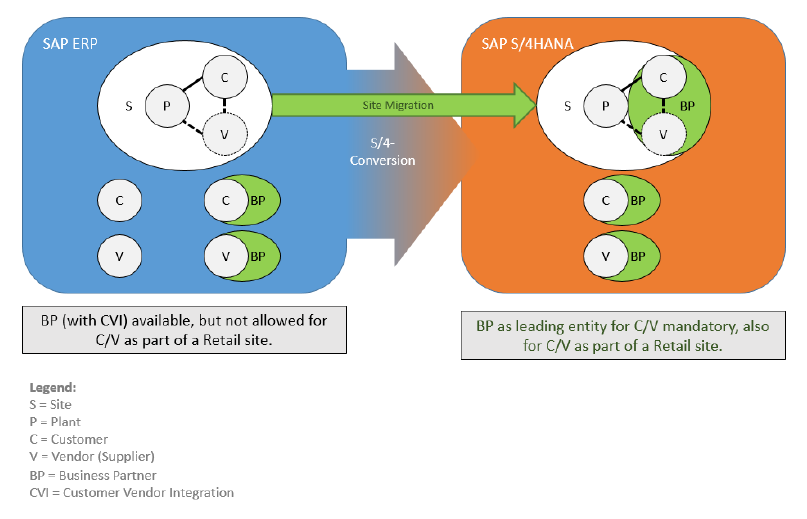 As a result of the business partner approach, some site-related processes are different since SAP S/4HANA 1610 and above compared to SAP ERP:

Before conversion to S/4HANA take place, we recommend a cleanup of site data and of Customizing related to sites and the C/Vs assigned to sites.

Second, the following (Customizing) activities are required in preparation for the migration of site data to the BP approach(Configuration details refer to XXXX_v2.1_SiteMasterConversionGuide.pdf in SAP Note 2310884):

Third, If a site has both a customer and supplier role, one common BP is created for the C and V assigned to the site. In order to create a BP with central data shared between the C and V role, there must be no conflicts in this data between an existing C and V that are assigned to the same site. If conflicts exist, the data must be consolidated prior to BP creation during conversion to SAP S/4HANA in order to avoid data loss or issues with BP creation. Table in document XXXX_v2.1_SiteMasterConversionGuide.pdf in SAP Note 2310884 describes the potential conflicts that need to be resolved prior to SAP S/4HANA conversion.

Fourth, a mandatory pre-check is performed at the beginning of the SAP S/4HANA conversion process in order to check whether the prerequisites for the site migration to BP are fulfilled.

For information about the messages issued during the pre-check, see the XXXX_Table_Pre-Checks.pdf, which is also attached to SAP Note 2310884.

The checks of the pre-check for site migration are only performed for C/Vs assigned to sites and only for other entities that are relevant for these C/Vs, such as C/V account groups. The relevant SAP Notes for executing the pre-check by using the preparation report are:

*Since Mar 2020, the customizing check report CVI_UPGRADE_CHECK_RESOLVE has been replace by new report CVI_CUSTOMIZING_RESOLVE. SAP note 2891522

If Retail sites have been created in the system, conversion is only possible to SAP S/4HANA 1610 or higher.

Once you have converted site master data to S/4HANA, there are some changes to the sites as a result of the harmonization of the data model, like customizing, site maintenance, BP maintenance, Site Distribution, and Site Archiving.

From this blog, you will get a full picture about how to convert retail site master from SAP ERP to S/4HANA OP 1610 and above. You need to carry out a series of necessary operations during three phases, and it makes you more clear what you should do at each step. It also describes the impact of the business partner approach on operations that involve site master data.

This is such a great blog. Thank you. Since this was written I would add note 2891522 as the report now has changed to CVI_CUSTOMIZING_RESOLVE.

Also, I wanted to know if you have encountered if the customer and vendor number of the retail site defer from each other. For example, store 1901 has customer D1901, but vendor A1901. This thows an error in the PERFORM_CHK_SMBP_FOR_S4_SIC report: Customer number D1901 and vendor number A1901 of site 1901 are different.

Thanks for any advice!