Elvira Wallis (Global Head Internet of Things at SAP) and Adel Al Saleh (CEO of T-Systems International) provided an update on the partnership between SAP and T-Systems and talked about connecting their IoT clouds at Hannover Messe at the 2nd of April 2019 (T-System Media Information). 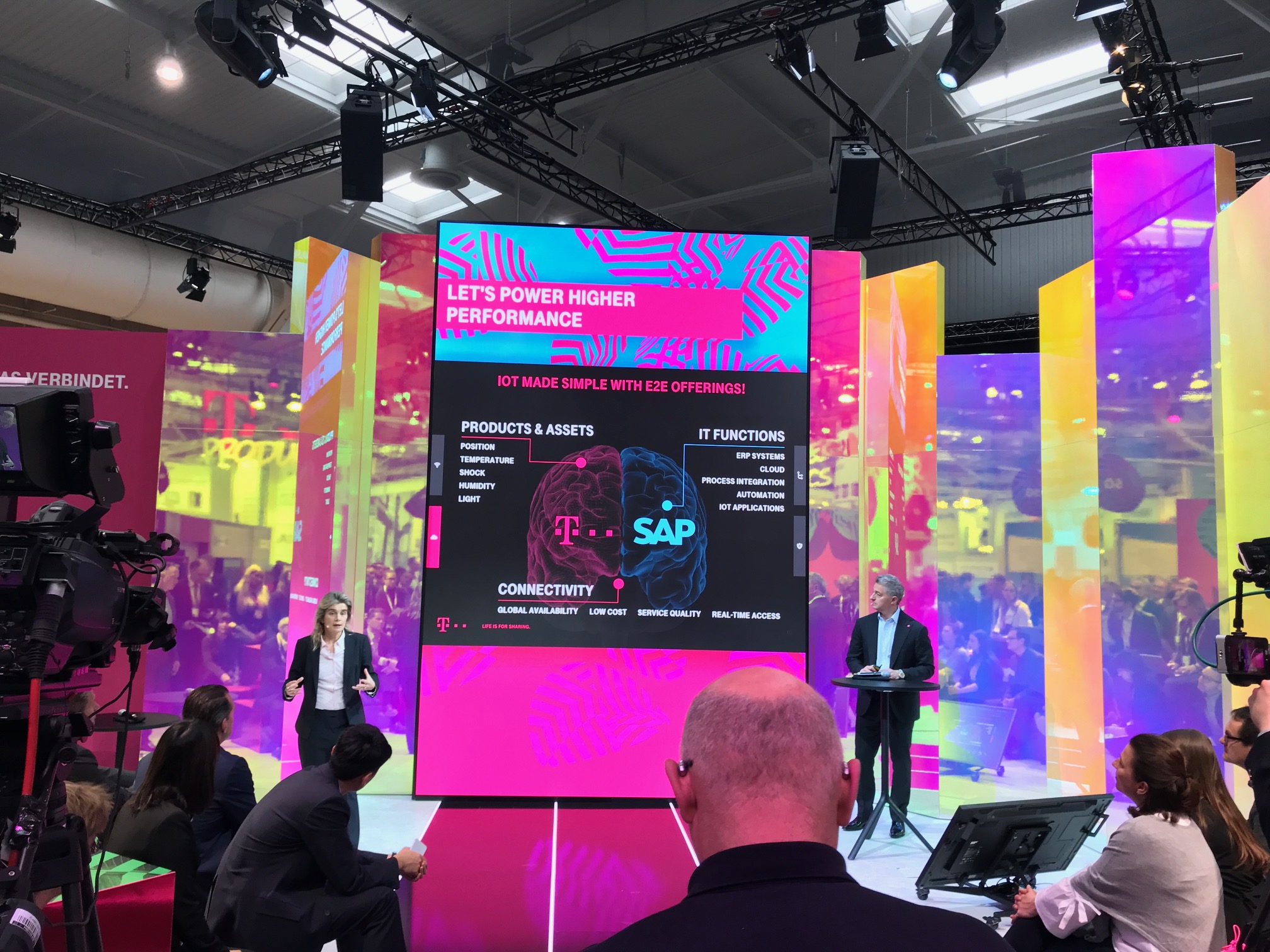 Seamless integration of device data into the SAP Cloud

The show case that was created by a T-Systems team to present at Hannover Messe what the partnership is all about is quite impressive: A real tracking device sends data from different sensors and this data is then displayed in near real time in a Fiori application running on the SAP Cloud Platform. 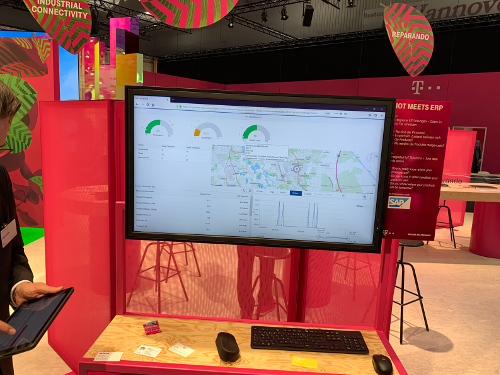 The tracking device for vehicles or containers (ECD Solid 2, the black box to left of the keyboard on the picture above) sends its sensor data in the T-Systems Cloud (“Thing Cloud”) which has a cloud-to-cloud Integration via SAP Cloud Platform Internet of Things component into SAP Cloud Platform (SCP). The integration between the clouds was built in a way beyond this showcase that it is seamless, it works with a minimal set of configurations on both sides, so any kind of device connected to the T-System cloud can be easily set up to leverage SAP cloud solutions.

Using SAP Leonardo IoT within SCP the device is mapped to its digital twin, the so-called “thing” through a big data enabled ingestion pipeline. The sensor data is then stored in Leonardo IoT’s Big Data Store from where it can be retrieved along with the thing’s master data to be consumed in applications using a set of APIs.

The application’s front end was built using the WebIDE, SAP’s web development environment for SAP Fiori apps. It is based on a Leonardo IoT application template including the special UI5 controls from Leonardo IoT: Gauge, Thing List, Sensor Chart and Map.

A first running application was created in a matter of minutes. The steps to get there included

There was absolutely zero coding and just some drag and drop and configurations necessary to get to this running first version of the application!

The showcase application was then extended to include some “near real time” behaviour that would show the new data automatically shortly after it was sent from the device. As we are looking into a cloud solution that always comes with some network latency and because the ingestion of the data takes some time, the update of the UI is not immediate but with a slight delay, thus the experience is near real time and not real time. The near real time extension of the application was done by writing some additional JavaScript code into the otherwise configured application. This is one of the beauties of the WebIDE templates: While it can be configured in no time without coding to get an application, the application itself is comprised of regular Fiori/JavaScript UI5 code and developers can easily switch from the WYSIWYG view to the code view and then enhance the code manually!

The final application shows the current temperature, acceleration and the battery level in gauge controls, the position of the device on a map and the distribution of the temperature and acceleration over time in a sensor chart. Via the acceleration values the chart quite nicely displays whether the tracked vehicle / container had to endure shocks as well as whether a certain temperature threshold was exceeded, both of which might not be tolerable depending on the transported goods.

For use cases where exceeding of acceleration or temperature thresholds matter, the show cased scenario can be easily extended using SAP Leonardo IoT to configure rules that would measure the corresponding sensor values on a constant basis and create business events which in turn trigger actions like the initiation of a business process, e.g. creating a service order in SAP C/4HANA

By means of extension it is also possible to embed the IoT data directly into applications, for example one can integrate the sensor chart in an application that deals mainly with master data of assets or goods. 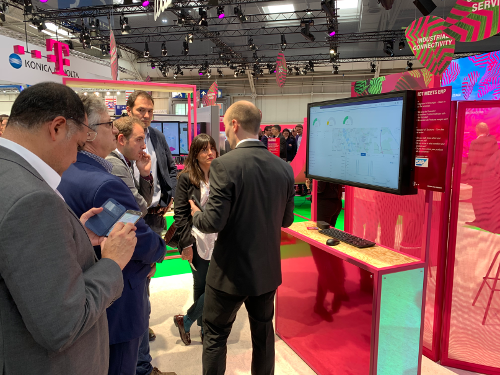 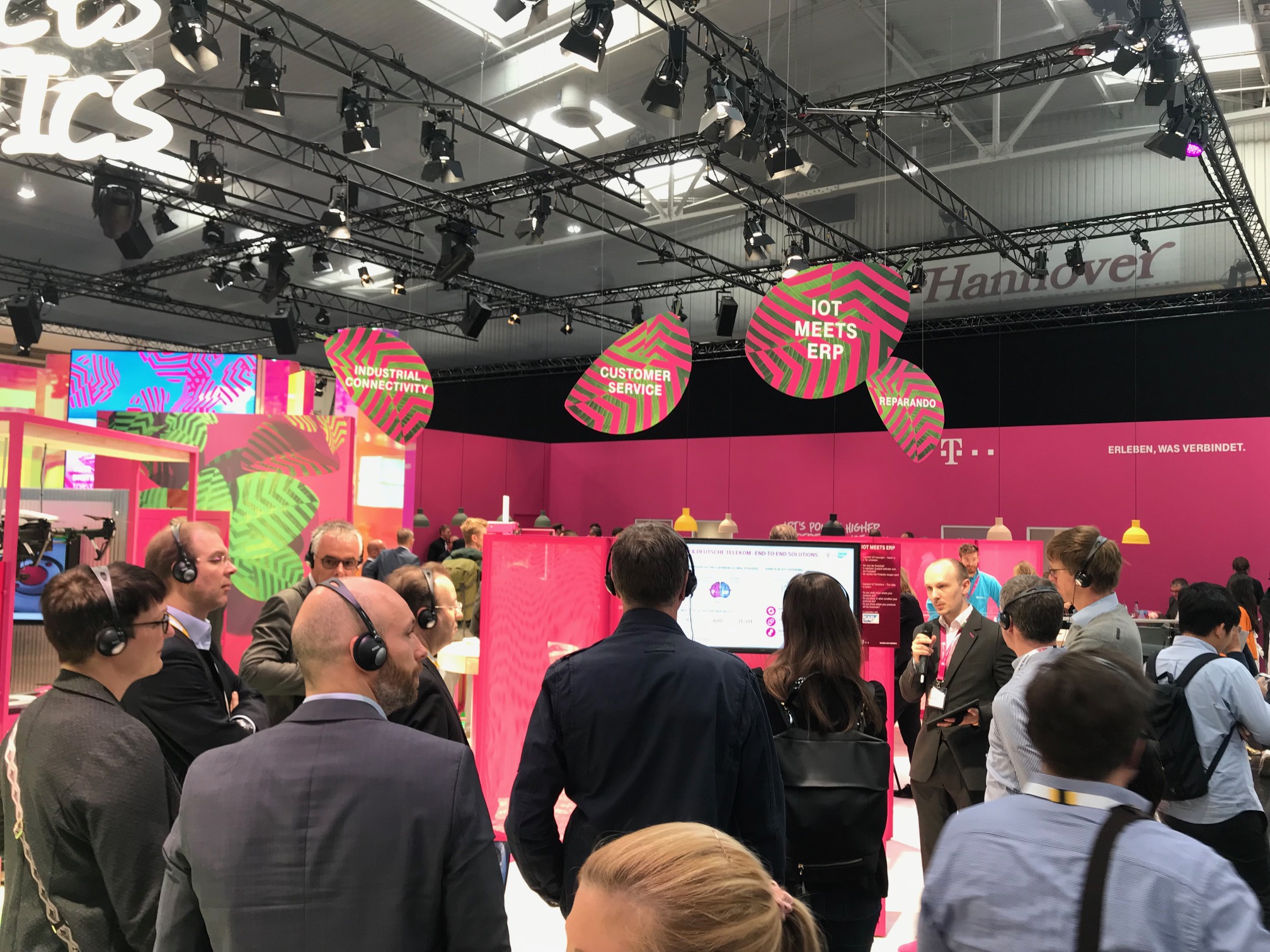 The show case provided insights how powerful the combination of the two clouds is: Devices connected to the T-Systems cloud can be easily integrated with SAP Leonardo IoT, its set of easy-to-use APIs and templates to create applications in no time as well as its ability to connect to SAP backend systems in order to invoke follow-up business process or embed the IoT data in an existing application.

Following the HMI event in April, all eyes were on Orlando for this year’s SAPPHIRE NOW conference on May 7th-9th. The partnership between T-Systems and SAP was a key highlight, you can find some impressions in the video between François Fleutiaux, Chief Commercial Officer at T-Systems, and Elvira Wallis, SVP and Global Head of IoT at SAP, here.

Very useful blogs with detail explanation..Thanks a lot Tim for sharing this.