This post shares about an interim/permanent workflow to avoid frequent restarts of SAP BO DSL APS(DSL Bridge service) which results in report failures.

DSL Bridge APS is used when refreshing/scheduling a report which is based on SAP BW data source.

DSL Bridge APS is a BO service which runs in Java.exe container and like other APS, the max/min memory allocated to that service is specified through Xmx/Xms values in its command line parameters.

We’ve seen DSL Bridge APS getting restarted many times when huge number of reports(based out of BW) runs or a report fetching huge amount of data from BW runs in the system at the same time.Ideally DSL Bridge APS being a Java process restarts itself by it’s own once the maximum memory allocated to it is reached, which results in the failure of reports which is currently running in that particular DSL Bridge APS.

Note : There are some cases where the DSL Bridge APS got struck in ‘Starting’ state once the maximum memory is reached which makes the situation even worse.

Since DSL Bridge APS is a Java process, it’s memory management has been shifted to Java monitoring tools such as Jconsole. The memory shown in Windows task manager is not the accurate one for this DSL Bridge services.

Garbage Collection process is taken care by the JVM implicitly which removes the unused/not referenced objects from the heap and make space for new object creation.

But w.r.t to the DSL Bridge APS, allowing it to reach it’s maximum memory allocated will end up in recycling of the APS and thus results in report failures.

How to perform explicit Java garbage collection for a DSL Bridge APS?

Consider a scenario of a processing node which has 2 DSL Bridge APS with maximum memory of 16 GB allocated to it. 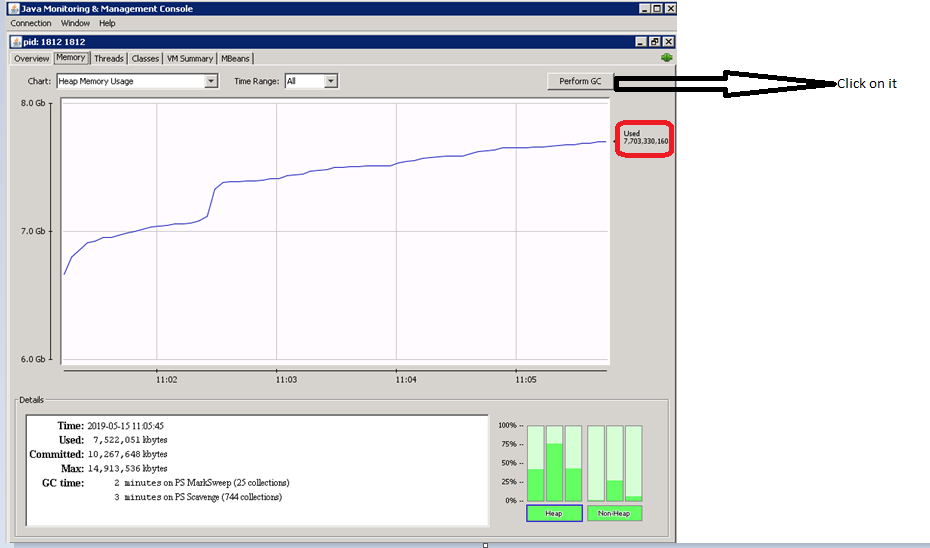 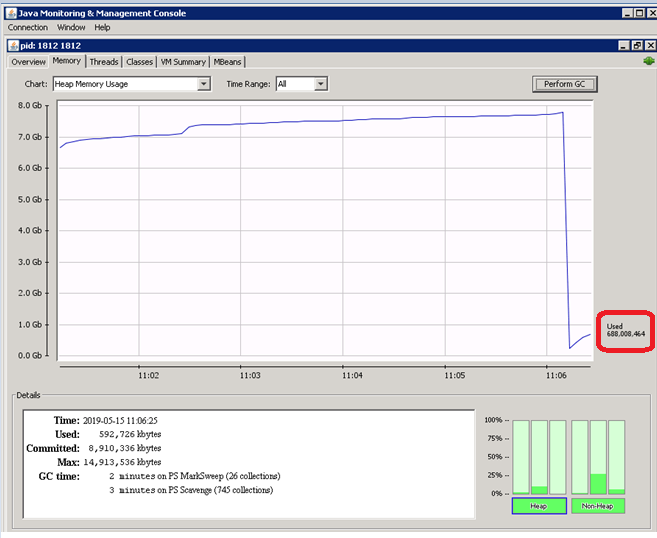 6.  The garbage collector will clear the unused/not referenced objects and then you will notice the           reduction in current heap memory usage thus making free memory available for new incoming           objects.

By this way you can prevent the DSL Bridge APS restart by releasing the unused heap memory.

So,you can set up a Monitoring alert for DSL Bridge APS at certain threshold limit(maybe at 75% of maximum memory) and do the GC through Jconsole,once after receiving the alert.The above illustrated is the manual workflow and you can automate this.

We’ve automated the above process using Powershell script. I’ve added the code below.

Note: The script is in POWERSHELL, so save it as .ps1 file and execute it.

Below is the logic of the attached script.

Note : It completely depends on your platform naming convention.We have two DSL Bridge APS with suffix(“DataAccessDSL”),so we opted for that name.It’s main purpose is to isolate the DSL Bridge APS from other APS from its command line.

4. Then it will it trigger the  gc() function to call the garbage collector though Jcmd(Java command           line utility) to act on the isolated pid’s which will free up the heap memory.

Hope this article helps Admins in getting rid of DSL restarts which results in report failures.

Very useful to know.  Thanks!

Good one Manhoj. I will give a try with your approach and let you know the outcome. Keep writing blogs like this.

Does HANA relational or JDBC connection go thru DSL bridge?  Do you only need DSL bridge if your data source is either SAP BW or SAP BW on HANA?