At SAP Inside Track Frankfurt, I gave a talk “Is your ABAP Code Ready for the Cloud?“. In my talk, I discussed my experiences gained during a development project on this platform. In this blog entry, I would like to discuss some aspects. You can find the slides here.

You are able to run existing ABAP applications in ABAP Cloud Environment if you manage to decouple them from the core systems. This helps you to keep the core systems clean since you reduce the amount of custom code in those systems. Moreover, you can use it to simplify your landscape and let SAP do the provisioning of the system. Another obvious advantage is that you get a more flexible release cycle for your application.

ABAP Cloud Environment is also a development and runtime system for edge applications since you have the latest ABAP features. When you develop an edge application for this environment or if you chose to redesign an existing one the question appears, what kind of architecture you should choose. Before I present my first ideas about this topic I will touch the question when a redesign for the cloud could make sense.

Lifiting a Monolith to the Cloud?

When you port your ABAP applications to the platform you have to be aware of certain restrictions. The number of APIs is restricted, also you can’t use ABAP Dynpro since there is no SAPgui. So very likely, you will have to adjust the code. On a case-by-case basis, you will find out how much effort it will take. But even when the effort is not that high you ask yourself the question when it makes sense to redesign at least parts of the application.

From my experience, most ABAP applications are quite monolithic. That doesn’t necessarily mean that this is bad. When the decoupling from the Digital Core is possible it makes IMHO absolutely sense to put an ABAP application to SCP.

In my case, I decided against it and favored a redesign. Why? In the end following questions lead to the decision:

In my case, I decided that it makes more sense to redesign the application from scratch. I found in the legacy app many interesting design patterns that became part of the new solution. But I also decided to break new ground. This is the topic I would like to discuss here.

I started with following assumptions about cloud readyness in the ABAP context:

Then I made some assumptions about cloud readiness and verified them using prototypes. You can find them in the mind map below. 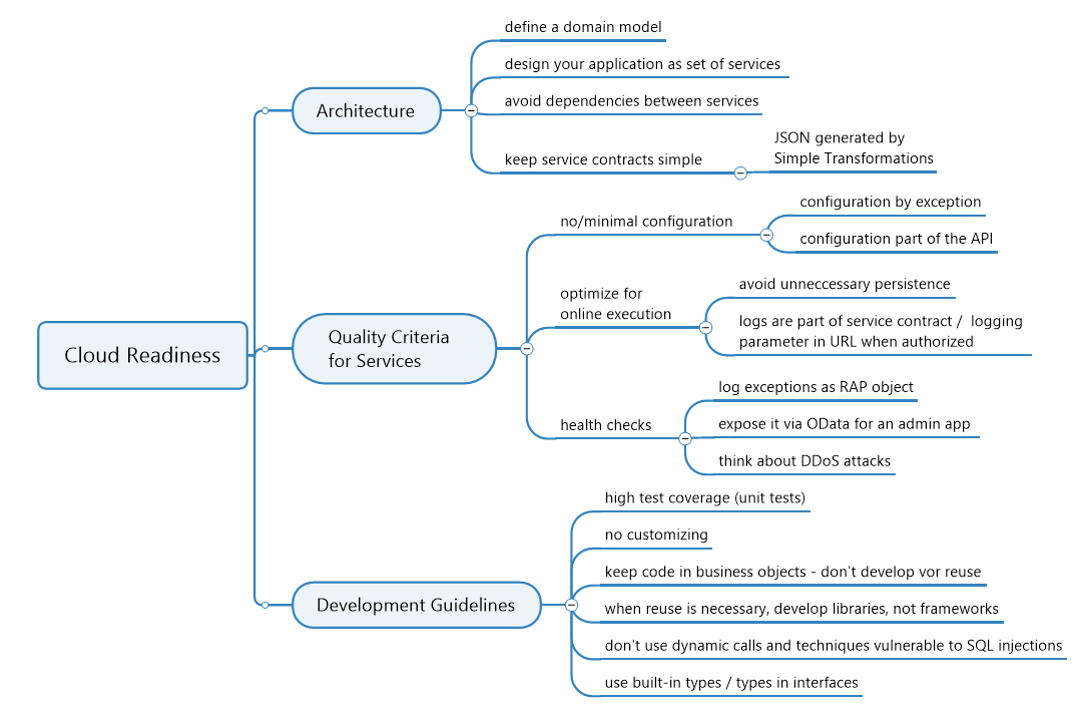 This leads to an iterative approach: Based on my assumptions I derive development guidelines. I develop certain modules following those guidelines. During the process of this work, I develop different vertical prototypes. Last but not least, I refactor my application and I obtain also a horizontal prototype. This is easily done by using the refactoring capabilities of ABAP in Eclipse. Then I look at the overall architecture and see whether it fulfills my needs. – So how do ABAP Cloud applications do look like?.

ABAP Cloud Environment applications consist of HTTP services. I case of Fiori UIs you will implement them as OData services. For A2X integration you can also develop plain REST services with JSON interfaces, too.

The modularization of Services follows from the domain model. When two services share a common persistence I develop them in the same deployment unit in different ABAP packages. Here is the architecture of a typical microservice. 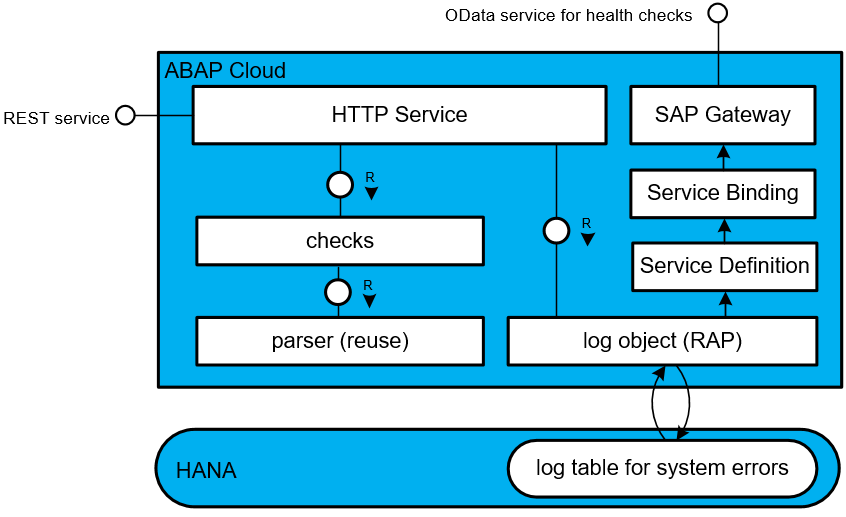 In cloud applications, it is necessary that you new versions of a microservice can be deployed very easily. Complex parametrization (typical customizing) makes this complicated. So I decided to avoid it whenever possible. I used the following strategies:

A typical example of it is logging. If the caller of the microservice needs a more detailed log, you can define a trace level as part of the API and give the result back. This is also a method to avoid unnecessary persistence of data.

How to get Avoid Customizing?

I try to avoid customizing whenever possible. Why?

For me, the reasons are so severe that I tried to avoid customizing whenever it is possible. In the case where this is not possible I recommend to use only “initial customizing” that is done only once.

I decided to keep the application architecture simple by introducing some principles that should ensure that ABAP microservices could be maintained and evolved easily. My first guideline was that I avoided the creation of frameworks and built libraries instead. So what is the difference? I understand as a framework a set of software modules that allow clients to plug in. From the view of control flow, the framework calls the client. So a framework enforces standardization of the application. Once the framework is understood different developers can plug in their modules. But there is also the problem that problem the framework restricts and inhibits the evolution of the application. This can be prevented if you develop libraries instead. In contrast to frameworks, libraries are called from the user. If you use ABAP interfaces to access the library you can easily replace a library with another implementation.

The second guideline was that I decided not to use customizing in system tables. I find this ABAP idiom in many applications. This is an efficient way to parameterize checks for example. Sometimes those system tables even contain names of function modules and classes that are called dynamically. This is also a pattern that is used often to implement code for validations, since aspects like time dependency can be implemented very easily and many developers can work in parallel.

I decided to use this pattern as well with the exception that I avoided dynamic calls. Therefore I had to store the former customizing in system tables in attributes of that classes and filled it using the constructor. This worked well although because the VALUE operator makes this very easy. On the other some pitfall can occur: The size of a single code line is limited (~150kb) so I had to split up the content of huge customizing tables. When I made a type I sometimes got violations of primary keys in internal tables. This takes some time to analyze.

I used in most cases type definitions in interfaces or classes instead of creating DDIC domains and data elements. I consider this as much faster and more flexible due to the refactoring capabilities of ABAP in Eclipse.

Last but not least I was seeking a very high coverage using ABAP Unit tests. I consider this necessary when you develop applications for the cloud.

In the past I was designing ABAP enterprise applications inside-out. Starting from a data model I develop a virtual data model and the business objects on top of it and OData services using Referenced Data Sources.

In the case of ABAP Cloud Applications, I suggest to alter this approach a little bit:

Working with the ABAP Cloud Environment was fun although it took some time until I learned that I had to use different ABAP classes, f.e CL_ABAP_UNIT_ASSERT instead of CL_AUNIT_ASSERT and CL_ABAP_CONV_CODEPAGE instead of CL_ABAP_CODEPAGE. I missed a lot of features like transaction ST22 to access ABAP logs. Some parts of the development have been a little tedious since there was no general health check infrastructure which is IMHO necessary to operate cloud services. So I had to implement a rudimentary one by myself.

And now I am curious: Which kind of programming patterns should be used in cloud applications and which should be avoided? What kind of possibilities do you see for simplification of ABAP applications so that they become ready for the cloud?