A few days ago Marius Obert and I took part in an SAP CodeTalk session with host Ian Thain, where we revisited the subject of UI5 – SAP CodeTalk – SAPUI5 Update. We decided it might be useful to write the session up in the form of a blog post, so here it is. Share & enjoy!

The video is here: https://www.youtube.com/watch?v=iin9oKSyaso and we wrote up the conversation in this blog post too. 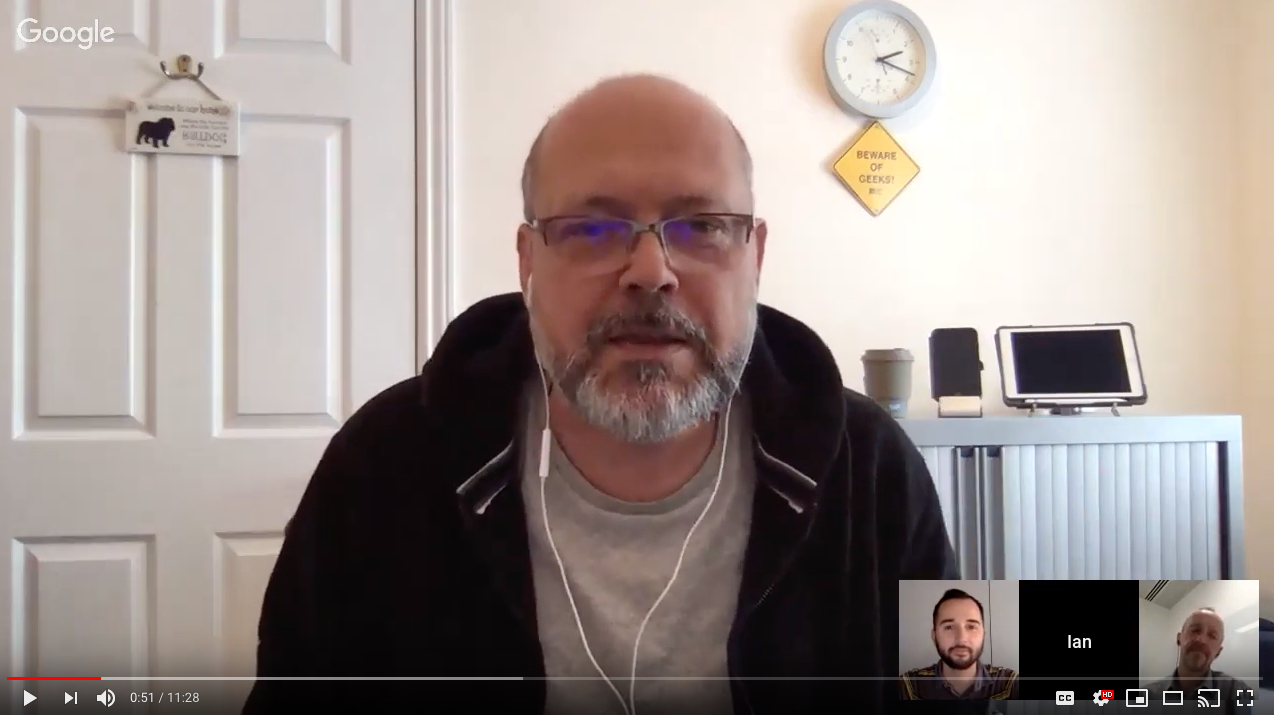 What is SAPUI5 and what does it let developers do?

SAPUI5 is an enterprise-ready UI development framework for building web apps. Nice looking web apps too, in our opinion. Enterprise ready? For us that means it has features such as:

… and much more. All baked in.

The framework comes complete with a large collection of controls – UI elements – and other building blocks such as model mechanisms for interacting with different data sources. How many controls? Last time we counted there were over 500.

The UI elements are many and varied – from simple buttons and switches, to table views, Gantt charts, graphical displays for analytics, and everything in between. It also takes care of the rendering of the HTML elements in a responsive way.

How is SAPUI5 related to SAP Fiori, and how do they differ?

That’s a good question, especially as we just released Fiori 3.0 a few days ago. Fiori is many things: a set of user experience (UX) design principles, a design language, a suite of apps that look and work in a consistent fashion … some even have said that Fiori is a state of mind.

SAP Fiori is realised in nearly all cases with SAPUI5, the development framework. The libraries of UI controls in SAPUI5 are designed to follow the Fiori design principles, so it’s easy to build smart looking custom apps that fit right alongside what SAP deliver.

What’s the difference between SAPUI5 and OpenUI5?

OpenUI5 is a subset of SAPUI5 and it’s Open Source, SAPUI5 contains some smart controls like charts and plot, which are not available in OpenUI5. The great thing about OpenUI5 is, that you don’t need an SAP license to get started. So, once you started to love UI5, you can even use it for your spare time projects as well.

What sort of apps can you build with UI5?

What sort of apps can’t you build with UI5? Of course, many folks see and use UI5 as the workhorse for their responsive enterprise application needs. SAP does too – UI5 powers the SAP Fiori revolution that started with the Business Suite, and continues to do so as we move to S/4HANA. So just as SAP developers produce apps with UI5, so can you. But that’s not where it stops. While you can build apps using the UI controls delivered with the framework, you can create your own controls, customise the styling and generally create anything you want.

We’ve seen Pacman implemented in UI5 – in fact we showed it off at OSCON in 2014: 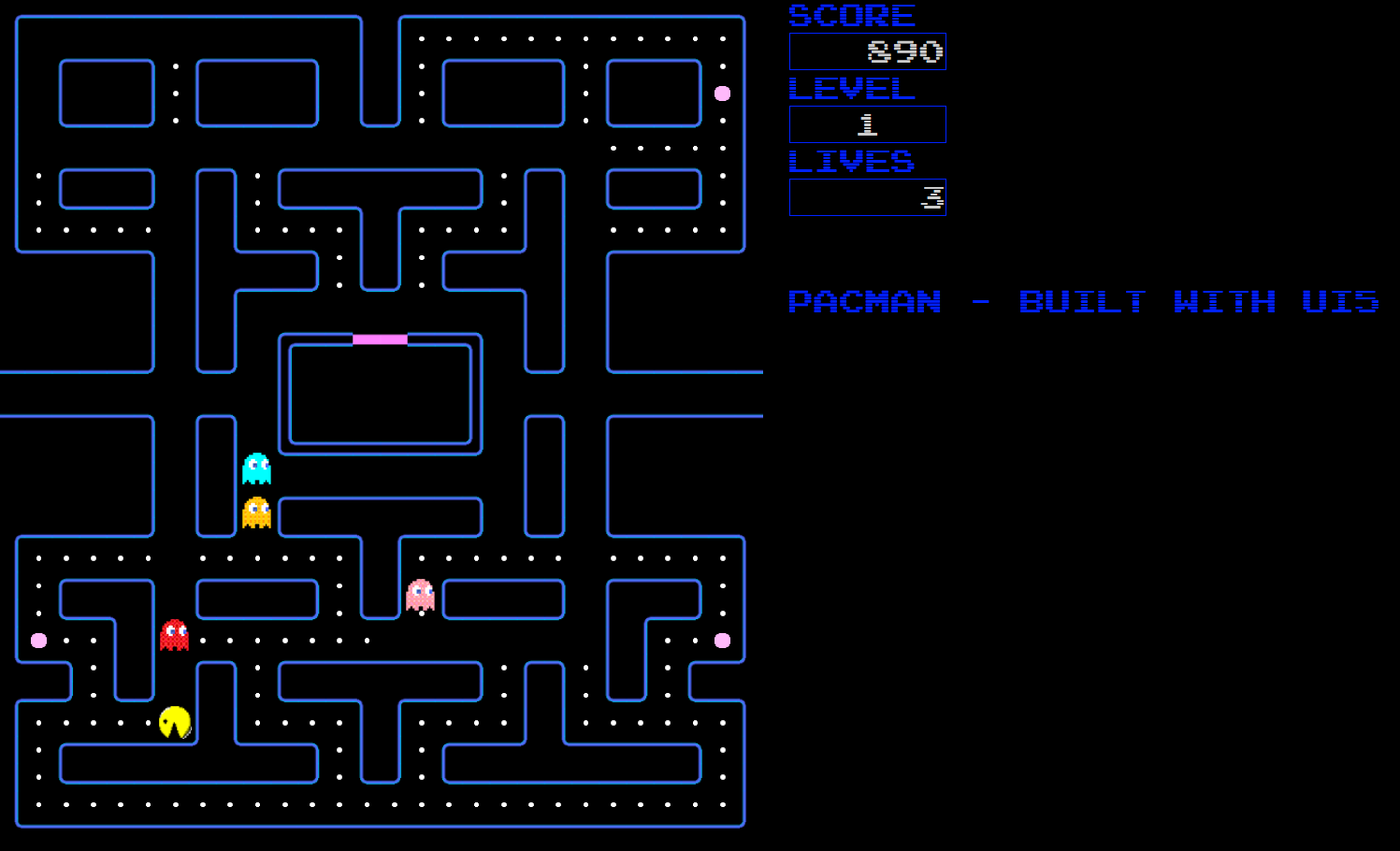 If you want to check out something just as crazy written with UI5 have a look at the Flush! game, with the source code available on GitHub.

Beyond the regular app situations, there are entire solutions built with UI5 – check out SAP Sports One and SAP Digital Boardroom for just a couple of examples!

What are the main takeaways for people new to UI5?

Well, there are many, but keeping it short:

If you want to get started, have a look at our new beginner tutorial Develop Your First SAPUI5 Web App on Cloud Foundry. There’s also a new UI5 course that started recently on openSAP: Evolved Web Apps with SAPUI5 which we highly recommend; if you’ve not followed the original openSAP course we recommend that too: Developing Web Apps with SAPUI5. Also visit the OpenUI5 home at openui5.org and the main UI5 home at ui5.sap.com.

You can even start with some window shopping and see controls in action in the the demo kit – and you can look behind the scenes at the code behind each sample that you can study and even download to run locally.

What can a seasoned SAP developer do with UI5?

Beyond what we’ve described already, UI5 supports routing & navigation, which means complex apps can be built to be easy for the user to move around in, and to allow deep links to specific business objects or states. UI5 supports modularisation of code which also helps with more involved developments and makes for better code management in the software lifecycle context.

UI5 also now offers web components that provide a set of reusable UI elements to you which can be used for your static web sites or for web application using any web framework of your choice. It also sports a clean extension framework making it possible to build upon and modify existing apps (both your own and those from SAP), and also provides the ability to extend more general Fiori infrastructure such as the launchpad itself.

While it’s very easy to consume OData services in UI5, that’s not the whole story. You can build integration scenarios and bring in other REST based services too. And if you do have OData services you can use annotations to drive automated UIs, which is the ultimate in a declarative based approach to apps. This is supported by SAP Fiori elements which provide designs for UI patterns and predefined templates for commonly used application patterns. These application patterns are not only transactional but analytical – there are graphical apps that you can put together too, such as the rather good looking (in our opinion) Overview Page (OVP):

An example of the SAP Fiori elements OVP, responsive across different devices

What’s new in SAPUI5 that developers need to know about?

UI5 development doesn’t stand still. We recommend you check out the UI5 home’s What’s New section which also will lead you to short update videos on YouTube in the SAP Technology channel.

And here’s the killer last question from Ian:

Why should I invest in a web app framework that is already over eight years old?

Well, come to think of it, React and Angular aren’t much younger. And in the web world, newer is not always better. The framework has thousands of person-days of effort invested and it shows. Not only that but that investment is continuing.

One huge benefit of investing in UI5 is that compatibility is retained all the time, and bug & security fixes will reliably be provided for years to come. You could think of this being another aspect of being enterprise ready. It’s a framework you can bet on, when you don’t want to switch to a different “modern” framework every couple of years. And even though you can rely on it for years, it’s not a framework that’s standing still – it is continuously evolving and embracing new concepts.

The way we build solutions based on UI5 is evolving too. While at first we used a plugin with Eclipse, many today develop UI5 in their favourite editors and IDEs, assisted by tooling of all kind. Of course, it would be remiss of us to mention SAP Web IDE, the de facto standard cloud-based development environment which was built from the ground up to create and maintain Fiori apps with UI5, for deployment to both on-prem and cloud targets. And if you’re wondering … yes, SAP Web IDE is itself built with UI5.

Get your best steel toecap boots on and kick the tyres, or enrol yourself in the new openSAP course to improve your existing UI5 skills.

You won’t be disappointed.