SAP Standalone Transportation management ( TM) provides functionalities for both Shipper (like Ericsson , Nestle) and LSP – Logistic service provider (like DHL , Panalpina) . TM was embedded in S/4HANA core in 1709 release and it used to support only Shipper scenario as stated in one of my previous blogs https://blogs.sap.com/2017/09/12/advantages-of-sap-tm-being-embedded-in-1709-release-of-s4hana/.  Note that LE-TRA of ECC does not support LSP scenario

Typical scenarios for Shipper and LSP in embedded TM of S/4HANA 1809 release have been depicted in below image. 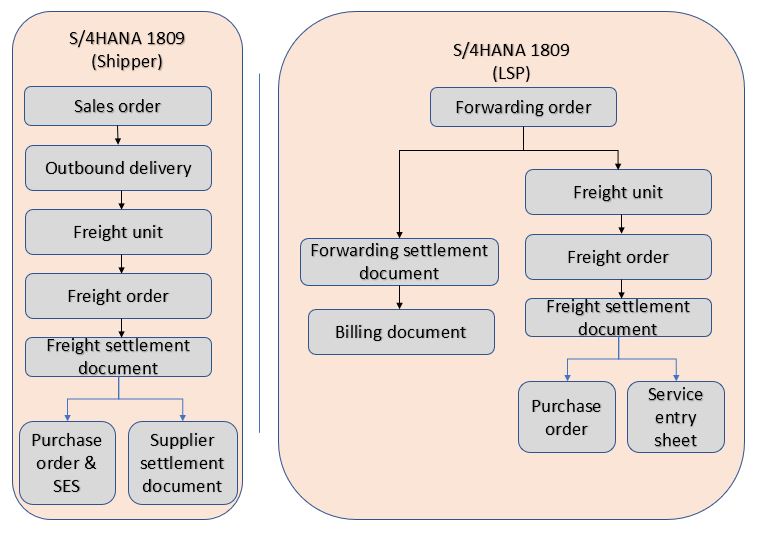 Document for a typical Forwarding order is in below image 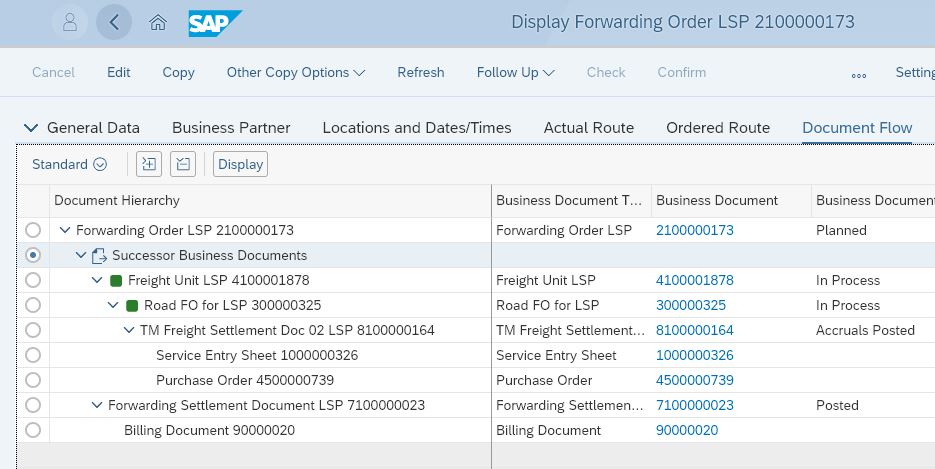 Note that there is no Agency business document (ABD) or Supplier billing document in LSP scenario as there is no need to allocate the freight cost to originating logistic document like Sales order or delivery or Material valuation. However, Profitability can be calculated in LSP scenario, if required.

Forwarding order is also used in Shipper scenario like in case of ‘Transit warehousing’ as described in one of my blogs in link https://blogs.sap.com/2018/07/27/transit-warehousing-with-embedded-tm-and-ewm-in-s4hana-1709-release/

In case of 'complex' shipper scenario's where the FWO functionality is required how do you recommend the FWO is created? By entering the Sales order data on the FWO again? We are considering to automate this bij using XI webservices.  Dou you recommend this or are there other solutions?

Can you please explain your 'Complex shipping scenario' . I want to understand the rational for using FWO in shipping scenario. But, yes there are some scenarios like 'Transit scenario' as in my blog in below link starts with a FWO.

Can we map government subsidy in SAP TM?

Please explain a bit more on the requirement for 'Govt subsidy'.

There could be a case where we have different legs of transport, say for e.g. Road>Rail>Road. If the government has announced a subsidy for freight movement by rail transport, can we map this?

Thanks for your answer.

Yes, custom charge condition can be created to fullfil the requirement.

Just before the second image,  "Freight settlement document (FSD): It is created with freight charges calculated based on the Freight agreement (FA) with subcontractor and is used to create Purchase order & Service entry sheet"

Here, For an LSP who is subcontracting the transportation to a carrier, Purchase Order is created in the TM of S/4HANA 1809 or do we need MM for that?

Yes, PO is created in MM module in SAP i.e not in TM . Screenshot in this blog is for embedded TM in S/4HANA. If standalone TM is used , then FSD from TM needs to be transferred to ERP for creation of PO.

Thanks for the clarification Mrinal.

We have embedded SAP S/4 1709 TM system, In that posting of forwarding settlement to create Invoice is not present through standard process so SAP has recommended for Upgrade but client doesn't want to go with this solution, they want some modification to be done in this system.

Is there a way we can achieve this through customization.

Currently we have LSP scenario with S/4 HANA 2020  TM embedded system, for our company we have our own Transportation company serves for our company transportation requirement. we have 2 sales organizations one takes care of sales and distribution and the other takes care of transportation requirements (LSP) assigned to a single company code. Our LSP has its own trucks and he do service internally  with in our company as well as serves for external customers also. This blog is exactly matching with our business process.

Here i would like to understand as our LSP is our own carrier, do we still need to create purchase organization in TM? or it is enough we create the FWO and do the FWSD and Billing and close?