CloudFoundryFun #4 – How to use Cloud Foundry Tasks

In this fourth post in my CloudFoundryFun series, we will dive a little bit deeper in the Cloud Foundry universe and talk about Tasks. Tasks are deterministic programs that can be triggered manually or also be scheduled.

When we think of apps and services we usually think of processes that, in the ideal case, never terminate. Most of the time, they stay put and wait for incoming requests. Once a request comes along, the app serves the request and then go back into the wait state.

While this is certainly the main purpose of cloud apps, there are many good examples of tasks that need to do something and then terminate. Possible examples could be:

Those tasks might occur only once, like a DB migration, or they can occur in regular time intervals, like data uploading. In either way, cloud platforms need a mechanism to handle tasks in a resource and cost efficient way.

Cloud Foundry comes with its own concept for tasks to solve those problems. But don’t worry, it’s a concept that you’re already very familiar with!

Tasks in Cloud Foundry are apps that haven’t been started and don’t have any instance running. You can use the no-start flag to push the application without starting it. This ensures the app won’t consume your resources and won’t cost you anything when it isn’t running.

A task is basically an independent Cloud Foundry app. It can make use of the same service bindings as your apps and communicate via messaging services.

You might wonder now: “Are you describing serverless aka FaaS to me?” And I agree, Cloud Foundry Tasks have some things in common with functions. They can be used to solve the same problems. As always, when you compare two different approaches, both have advantages and disadvantages. The FaaS approach has the potential to scale very well and integrates easily with “stuff” outside of Cloud Foundry. CF Tasks on the other hand, are first-class citizens in Cloud Foundry. Thus integrate well with existing CF services and apps. They are developed, deployed and managed like regular apps, which is why their lifecycle management is easier.

I don’t want to say one approach is superior over the other. I think it’s important to evaluate this for your individual needs.

If you’ve ever used the Cloud Application Programming Model, you already used CF tasks. You might have noticed that your CAP project contains at least two modules: What’s the purpose of both modules, what happens during deploy and runtime? This is a very good question, so let’s have a look into the Cloud Cockpit after the deployment of the MTA archive: 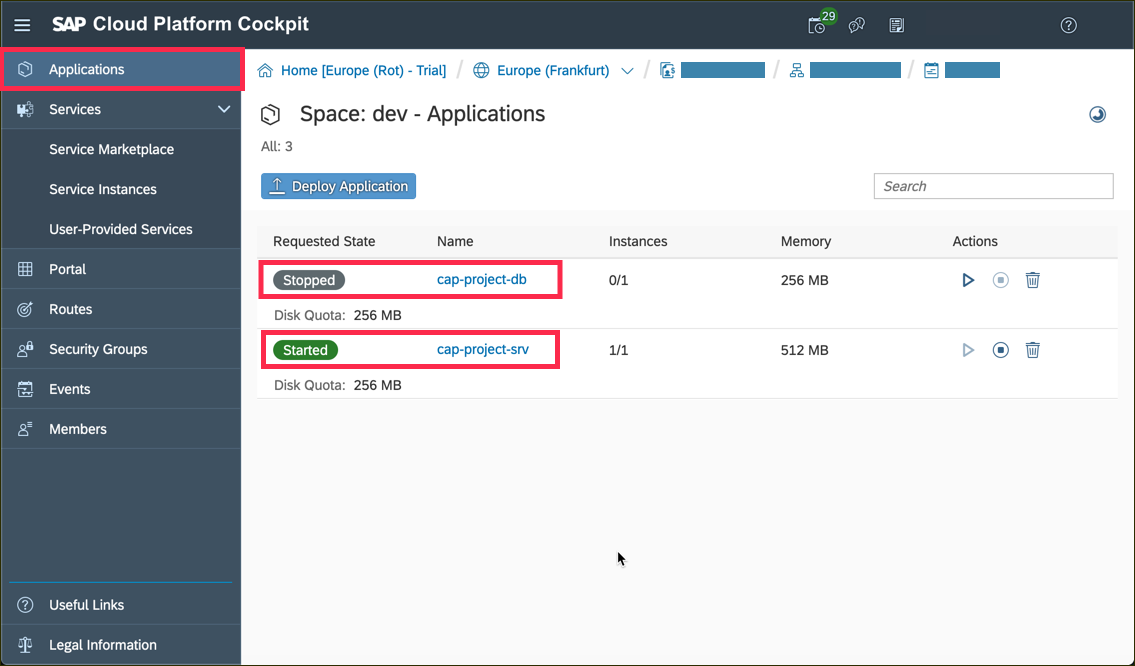 You can see, the srv module started to serve incoming requests. The db module on the other side isn’t running anymore. This is intended, your app did not crash. Let’s have a look at the associated logs 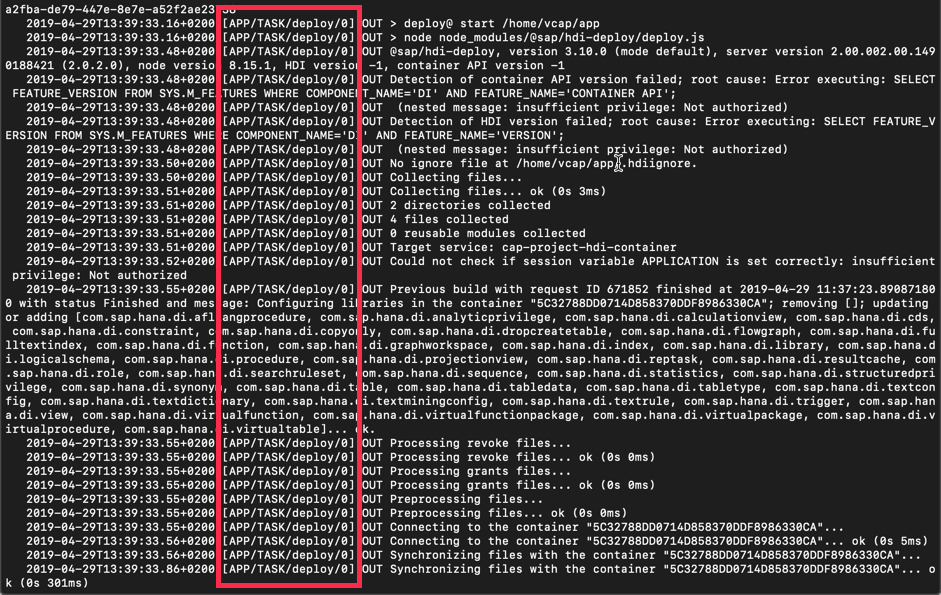 So you can see that this module triggered a task to set up the DB schema and to import the sample data. The Cloud Foundry CLI actually tells you that this is a task ([APP/TASK] in the red box), and not a regular application.

Now you understand what tasks are and how they are already used in production scenarios. The next step would be: How can I use them for my own app?

As you know, Cloud Foundry builds on top of open standards instead of reinventing the wheel. You can run CF tasks in the same manner as local commands on your machine. Use the name of your running Cloud Foundry app as <APPNAME> and <TASK COMMAND> can be any terminal command of your choice.

Schedule your own CF Tasks

It often makes sense to schedule recurring tasks. Examples could be sending out reports via email or importing new data into your database. For those scenarios, SAP offers the Job Scheduler service in the Cloud Platform. You can use this service to schedule and manage all your tasks in one dashboard. The service dashboard also allows you to see and download the run logs. 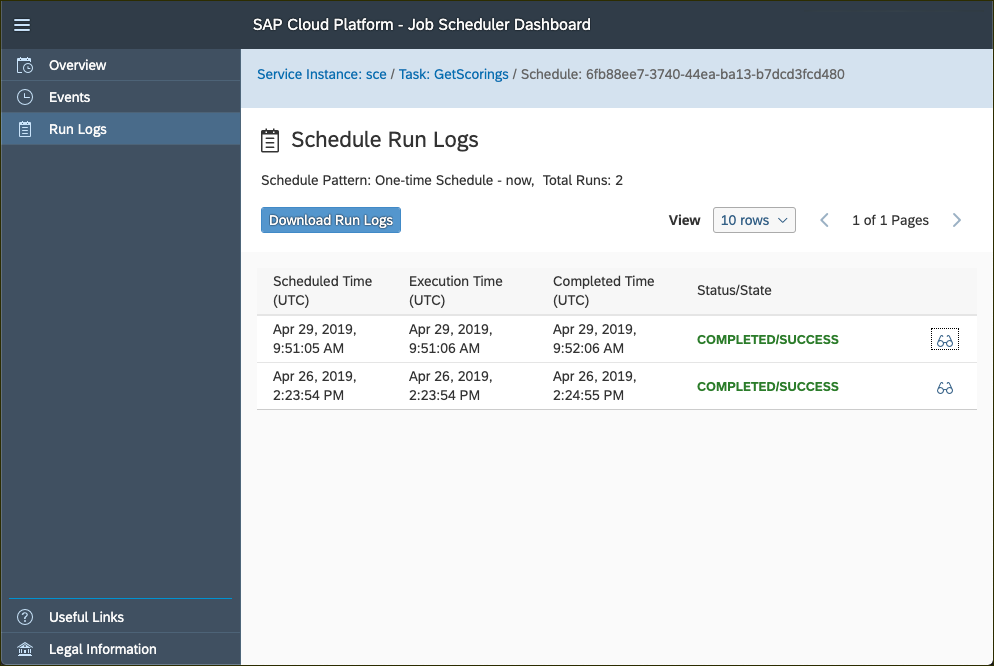 You know my posts, especially in this series, always contain a hands-on part. Let’s get to the fun part!

Let’s split our mini app into the following four files:

The persistence.js file takes care of the database connection. It provides two functions to read and write data into our MongoDB.

The index.js file starts a simple express-based server. A request to this server returns all available match data.

The last JS file, fetch.js, calls a public API to fetch the latest results and inserts them into the database.

In a productive scenario, we would want to check for duplicate data. But for the sake of simplicity, we leave this part out here.

Tying it all together

The package.json file ties everything together and defines the npm scripts. When we deploy the app, Cloud Foundry will execute npm start to start up the service.

Here, we integrated the task into the same application, as our server. In productive scenarios, you might want to split the server app from the tasks.

In this edition you have learned: 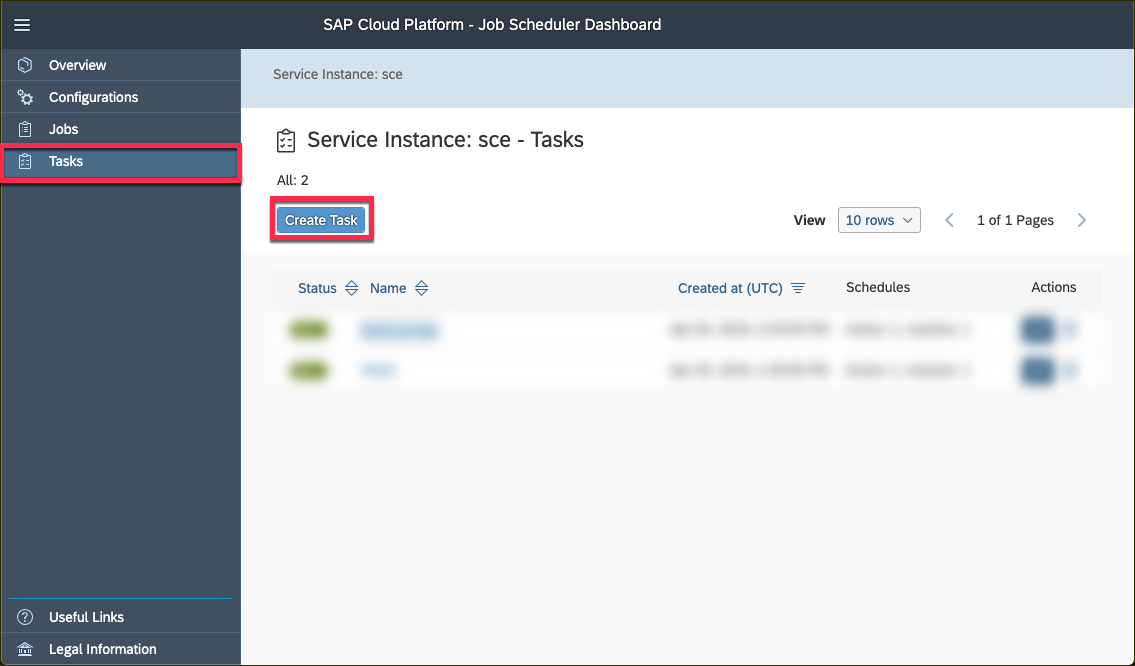 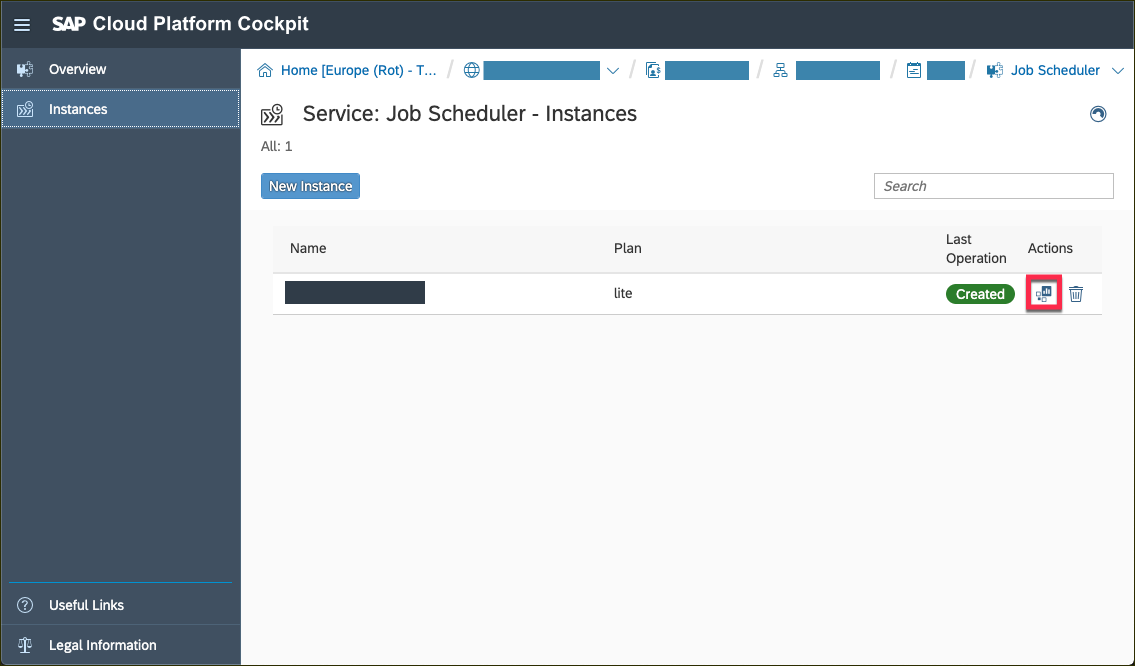 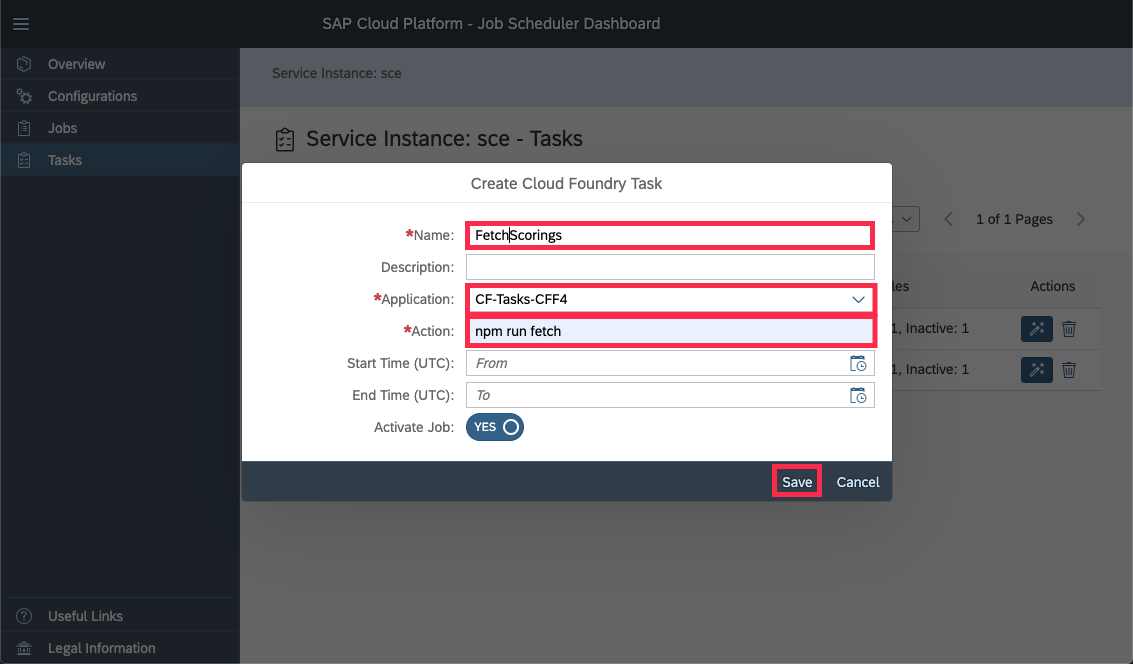 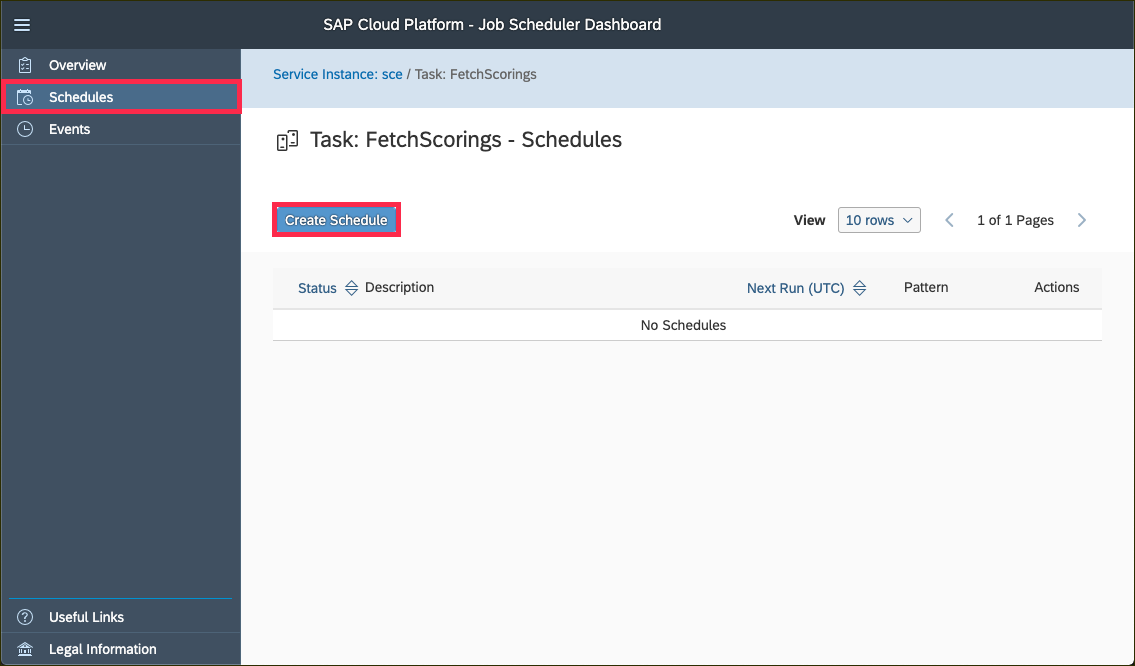 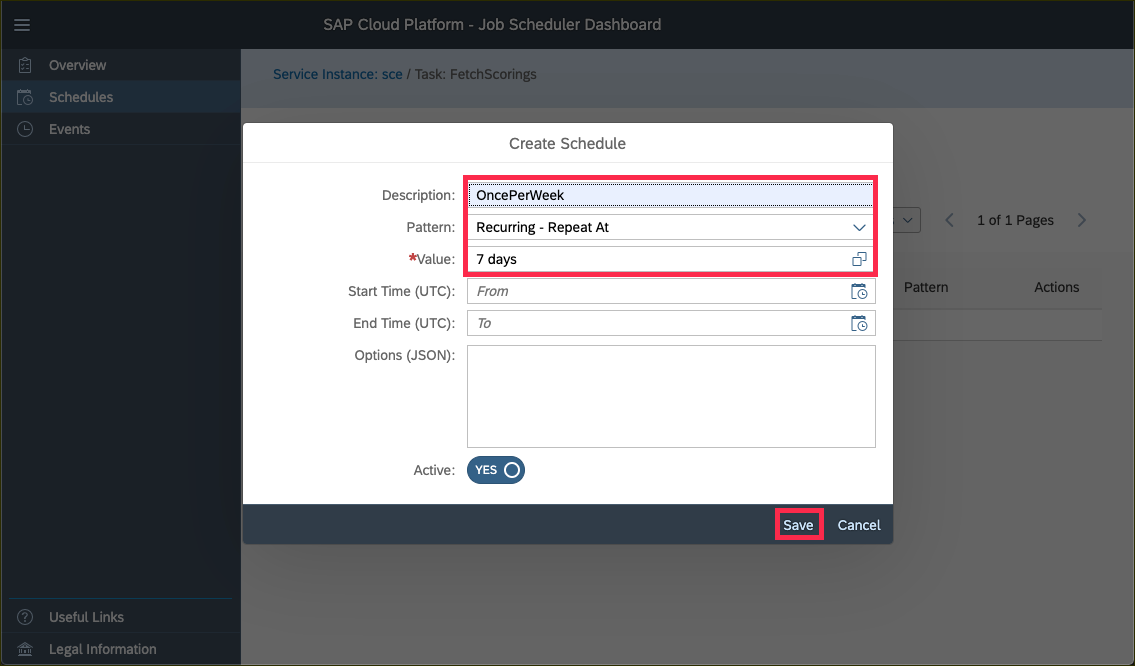 Great blog!. But one quick question, Job Scheduler is still in beta? or can we use in productive system?

I don't think this service is in beta. I just checked and couldn't find a "beta flag" in the service marketplace nor in the documentation. So you are good to go 🙂

Thanks for your quick response. I think my confusion is because says here:

Says a "beta" offering. So that was the reason to ask you.

But now, I'm good to go. Nice tool to execute my process.

Thanks for pointing me there, this content is outdated. I'll see if we can update it.