Attended on Desktops? Unattended on Servers? RPA Is a Continuum!

Part Four in a four-part series.

Companies today are striving to improve the experience of their customers in order to boost customer retention, irrespective of the technological approach involved. Robotic process automation is an excellent tool for more efficient customer relationships, freeing up employees from repetitive and tedious tasks.

The current distinction between Attended RPA, where a robot assists a human in carrying out tasks on their workstation, and Unattended RPA, where a robot works autonomously on a server, is artificial or even dogmatic, and will eventually fade away. Ultimately, effective implementation of the processes will involve the right amount of scripted robotization, artificial intelligence, and a combination of expertise and human empathy.

Currently, the Robotic Process Automation market, as presented by analysts and consultants, appears to be comprised of two seemingly different, if not opposing, sides.

Automation can be carried out at the workstation level, where a software robot will perform certain actions in place of a human being. Like a human, it will read the contents of an application window, locate fields containing the useful data, copy the data to another window, launch a transaction, and so on. The robot can also perform checks on the data it handles, providing the company additional compliance guarantees relative to its defined procedures.

During the process, the robot can return control to the person in front of the workstation, if necessary, so that the person can make a decision that requires their intelligence or business experience.

This aspect of Robotic Process Automation, where the robot acts like a human being’s software assistant, interacting with the workstation while complying with business logic, is called attended RPA, or Robotic Desktop Automation (sometimes referred to as RDA).

An example of this, in a sales context, is a robot that assists a salesperson in developing a proposal or processing an order:

Automating certain processes can also take place on servers, almost without human interaction. A standalone software robot can use applications to retrieve information, apply control rules to that information, execute processing to produce new data, and then inject that new data into other applications through their user interfaces (UIs) or application program interfaces (APIs). This aspect of Robotic Process Automation, where the robot works alone, is called unattended RPA.

However, the standalone robot remains under the supervision of human beings, as it is necessary to monitor the execution of processes to ensure they are successful. When an exception or problem occurs, a human expert (a “robot supervisor”) must determine the cause, correct it, and then restart the robots so that the process resumes where it had stopped.

An example, still in a sales context, is a robot that analyzes Excel tables, retrieves information, and injects that information into the company’s ERP:

What Do Companies Want? Effective Automation with Fast ROI!

In reality, this separation (or opposition) between attended RPA and unattended RPA no longer applies when you take a closer look at company expectations. Ultimately, their expectations are simple: Improve the efficiency of the most commonly used business processes, with a quick ROI, thereby accelerating the company’s digital transformation with a measurable effect on the working conditions of its employees.

At no time does a company say, “I will take this process and automate it completely!” The company has a pragmatic, results-driven approach, guided by the needs expressed by its business. It focuses on greater overall efficiency, regardless of the technology mix and the human or artificial intelligence involved!

Sometimes it’s enough to automate 60% of a process and to leave the remaining 40% to a human, in order to obtain an ROI within a few months, with just a few weeks between the start of the project and the implementation of the attended RPA solution on the workstations of a few thousand employees.

We have also observed some projects where it was decided, somewhat arbitrarily, to fully automate a process, taking into account all of the exceptions, problems, and error situations that may occur between the start and end of the process. The robot’s design and development costs can increase dramatically, and its ROI may dwindle or disappear altogether.

What about Artificial Intelligence?

Artificial intelligence technologies are coming, and they will play an increasingly central role in companies, particularly in process automation. This is the case, for example, with the commissioning of the first Arabic language chatbox in the Middle East. Kleptika integrated the chatbox software, developed by the startup Arabot, into the key account’s IT using an RPA robot. The robot searches for customer data in the customer’s data silos, including on an IBM mainframe without an API or web services. The robot provides the chatbot with exactly the same permissions and access rights as a call center agent, fully protecting the security of the information system.

AI is gradually entering into the picture of process automation. But again, they are not miracle tools meant to replace humans with a snap of the fingers. Eventually, semantic analysis, natural language processing, machine learning, deep learning, chatbots, and sentiment analysis software will find their place in process automation, alongside existing technologies and human beings. And perhaps, considering the need for cooperation between people and software, we should talk in terms of augmented intelligence rather than artificial intelligence.

Our Belief: Robotic Process Automation Is a Continuum!

As you may have noticed, our approach is fully pragmatic, and the satisfaction of our customers who use our solutions demonstrates that companies today are waiting to complete their digital transformation.

We believe that Robotic Process Automation must be able to support a wide variety of processes, based on business objectives and expected ROI, using a technological mix that can adapt to each use case.

Therefore, within the same company, we can have the following final configuration for three critical processes A, B, and C:

These processes could be automated very gradually, with different phases of progression, steadily increasing the amount of robotization and artificial intelligence.

So, for example, we could have the following sequence for Process C: 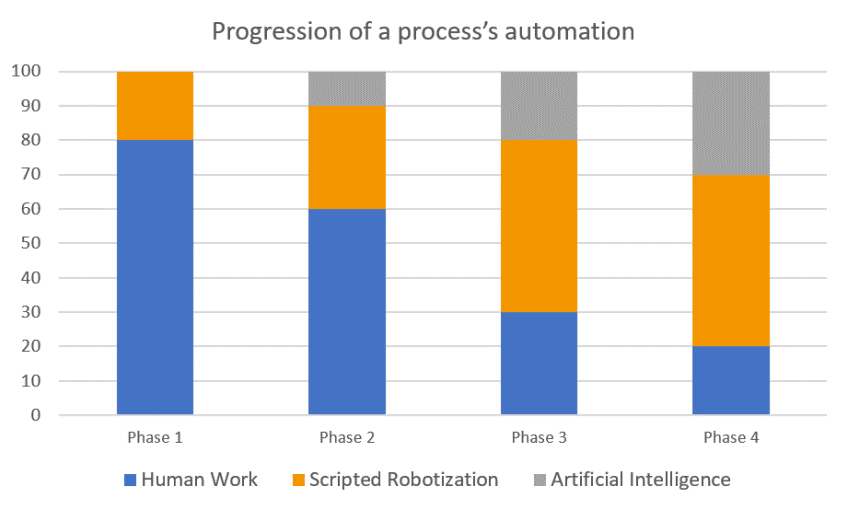 In the end, we see RPA evolving and becoming enhanced. Far from being entrenched between two apparently opposing approaches, Robotic Process Automation is a continuum that contributes agility and efficiency to the digital transformation of organizations.

This article was originally published as part of Contextor’s blog and has been republished with permission. Contextor is now a part of SAP.