In 2012 we introduced the Eclipse based ABAP Development Tools (ADT) to the world. Since the very first day we have released new client versions around every 3-5 months. Customers need the newest ADT client version to connect to the newest ABAP server version. However, ADT client updates could be skipped and installed only when needed because most customers do not immediately upgrade to a newer ABAP server version. For customers who are developing on an SAP BTP ABAP Environment system this situation has changed.

Why? With the introduction of the SAP BTP ABAP Environment (https://community.sap.com/topics/btp-abap-environment) we offer a new ABAP server version every three months, now. The cloud-based ABAP systems get upgraded automatically. Customers who want to connect to the upgraded ABAP system need to update to the newest ADT client version.

More information regarding our ADT support strategy can be found here: https://launchpad.support.sap.com/#/notes/1856565

A new Eclipse version every 3 months

Starting with the release 2018-09 the Eclipse platform has changed its release cycle. Previously, Eclipse released one new feature release each year followed by three maintenance releases. Now, a new Eclipse feature release comes out every three months and the maintenance releases were dropped. The reason for it is mainly, to improve the ability to innovate and release new features faster. It also makes Eclipse updates smaller and less disruptive.

What does this mean for the ABAP Development Tools?

What are the advantages of the faster release cycle?

Before we supported an old Eclipse release for up to 24 months. This meant that there were cases in which we could not adopt new and innovative Eclipse features immediately because they were only available in the newest release. Now, thanks to the new release cycle, we can adopt and provide new Eclipse features much faster.

Prerequisite for running Eclipse is a JVM installation. There has been changes in this area as well which are documented in the following SAP Note: https://launchpad.support.sap.com/#/notes/2700275

If you are a customer of SAP BTP ABAP Environment, you should consume new ADT client releases as soon as possible. Furthermore, the release cycle of the Eclipse platform has changed and requires faster adoption of new versions as well.

Find more information on how to efficiently distribute client updates within larger organizations in the ABAP Development Tools Installation Guide (chapter 6.3 “Recommendations for the System Administrator”).

After reading your blog, I am a little confused as to which version of ADT you should install depending on your version of eclipse. As you mentioned, Eclipse now releases a new full release every 3 months. In the past, I would try to link up the version of Eclipse with the corresponding URL for ADT, for example:

you cannot map exactly the release months of Eclipse to release months of ADT: Eclipse and ADT are not releasing in sync. The ADT policy remains the same: ADT plug-ins can be used with the last two feature releases of the Eclipse platform, meaning e.g. that you can use current ADT https://tools.hana.ondemand.com/2019-03 with Eclipse versions 2019-03 (4.11), 2018-12 (4.10) and 2018-09 (4.9). Eclipse 2019-06 is not supported yet. It is other way around: a certain Eclipse version is the prerequisite for using ADT. Additionally as soon as a new ADT version supports the latest Eclipse release, you can update Eclipse and use this new ADT.

Thanks Olga, that clarified things for me.

Thanks for the blog, Olga!

Could you please explain one thing about eclipse: are there any features that was deleted/excluded from ADT-eclipse?

On this page they describe the features for developing WebDynpro in eclipse - but I am checking the latest update and could not find the functionality ( https://blogs.sap.com/2013/05/07/developing-web-dynpro-abap-applications-using-abap-development-tools-for-eclipse/ ).

Also on that page the feature for extension of Fiori applications also was explained. But I could not find it now in eclipse. ( https://blogs.sap.com/2015/04/23/extend-a-fiori-app-in-eclipseweb-ide-and-launch-the-app-in-enterprise-portal/ )

Could you please explain how I could use those features in eclipse?

yes, you can still develop WebDynpro in the latest ADT in Eclipse (3.4). Just follow the blog. You will see Web Dynpro tools in the Installation details of your ADT: 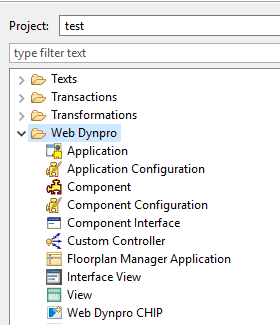 But it seems that Eclipse Oxygen is not working with that. I have installed Eclipse 2019-09 with the latest update and it is working for me now.

Why I am mentioned about Oxygen: because it is here 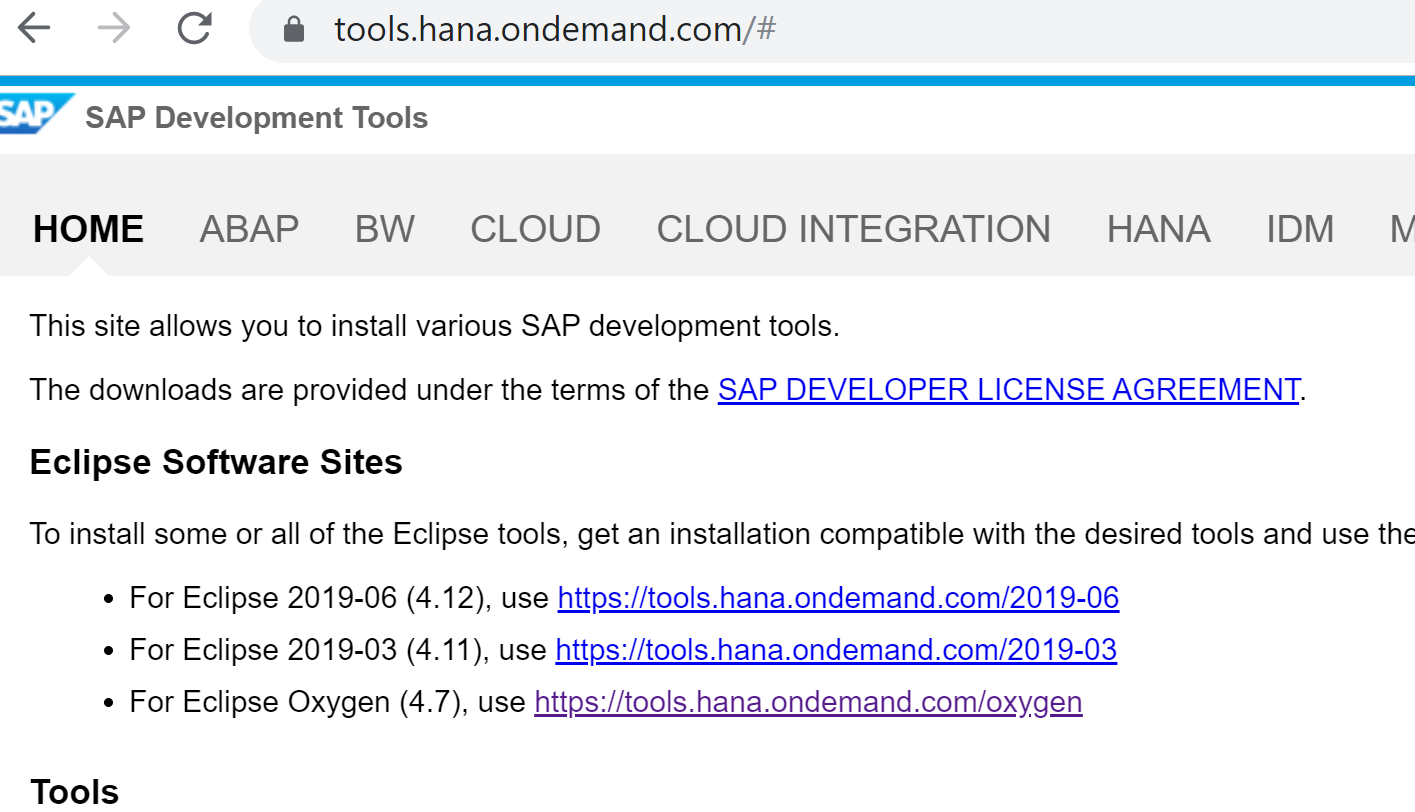 just take a look at the table of toools on the https://tools.hana.ondemand.com/: the Eclipse Oxygen is not marked there:

Oxygen just pops up in the list above just because some of the tools in maintenance mode are still relevant to customers and they can no longer make the adjustments necessary for new Eclipse versions.

I am trying to work with ABAP trial version which is available for trial on cloud foundry. In eclipse oxygen when I am trying to download ADT plug-in, it is not showing in the list. I am using URL- Please suggest any help for this issue.

Actually I want to work on ABAP on cloud, which option is not available to me on eclipse neon in which I installed ADT plugin, but it is only letting me work with on-premis system only. can you please suggest which version of eclipse to use to add ABAP cloud Project.

I got to know that ABAP on Cloud is supported by Eclipse Photon only. I also tested it from Eclipse Photon. it is working perfectly fine.

Thank-you so much for your valuable response.

am I doing something wrong or it is not possible to change the value of a field in ADT debugger?

I would like to insert a print screen but it's simply not possible from clipboard.

I have to save it as .jpg and then upload it.

Yes, it works exactly like the SE80. Please check the authorization for debugging.
OBJTYPE = DEBUG

they will come soon, in a few days.

here is the link to ADT Release Notes available from today.

I'm not sure if this is best place to ask this, but since you're still responding to recent questions, I figured I'd start here. I am running ADT 3.8 on Eclipse 2019-09. In the ATC Result Browser view, I get an Java NullPointer exception whenever I try to use the "Configure Tree..." option to view results for other users. The exception occurs as soon as I click on "Configure Tree..."

it looks like you have a problem with your Java installation. I've tried Eclipse 2019-09 with ADT 3.8 and can open "Configure tree..." in the ATC Resut Browser without any problems.

Thanks, Olga. In light of your comment, I just went ahead and installed Eclipse 2019-12 and that seems to have resolved the issue.

So when will a new AdT-Version supporting 2020-03 be available?! Or (as maybe you can’t answer that) how could I find out when it is?!

Edit2: Insipred by the mentioned Blog, I tried again with 2020-03 + AdT 3.8.5 and now it works's fine! (What I did different this time: a gave a new dummy-workspace when starting up eclipse before doing the AdT-install; last time I had used my "real" workspace).
The question about new AdT-Versions still stands, though.

the page https://tools.hana.ondemand.com/#abap lists always the latest supported Eclipse version by ADT, and it is 2020-03.

Installing Eclipse and starting it using the "real" workspace containing ABAP projects (if ABAP part is not yet installed) caused your problem.

I have recently installed Eclipse 2021-06 on my Windows 10 PC with Java 11 64 bit. I choose BW Modelling Tools,ADT and SAP HANA Tools for installation and it fails during the Installation process with the below error. I have used Eclipse 2020-12 earlier but did not face any issue that time during Installation.Please advise

Could someone please suggest on what could be the issue?

I have recently installed Eclipse 2021-06 on my Windows 10 PC with Java 11 64 bit. I choose BW Modelling Tools ,ADT and SAP HANA Tools for installation and it fails during the Installation process with the below error.

Could someone please suggest on what could be the issue?