This is a searchable description of the content of a live stream recording, specifically “Episode 15 – Starting to look at a frontend for our Northbreeze app” in the “Hands-on SAP dev with qmacro” series. There are links directly to specific highlights in the video recording. For links to annotations of other episodes, please see the “Catch the replays” section of the series blog post.

This episode, titled “Starting to look at a frontend for our Northbreeze app“, was streamed live on Fri 29 Mar 2019 and is approximately one hour in length. The stream recording is available on YouTube. 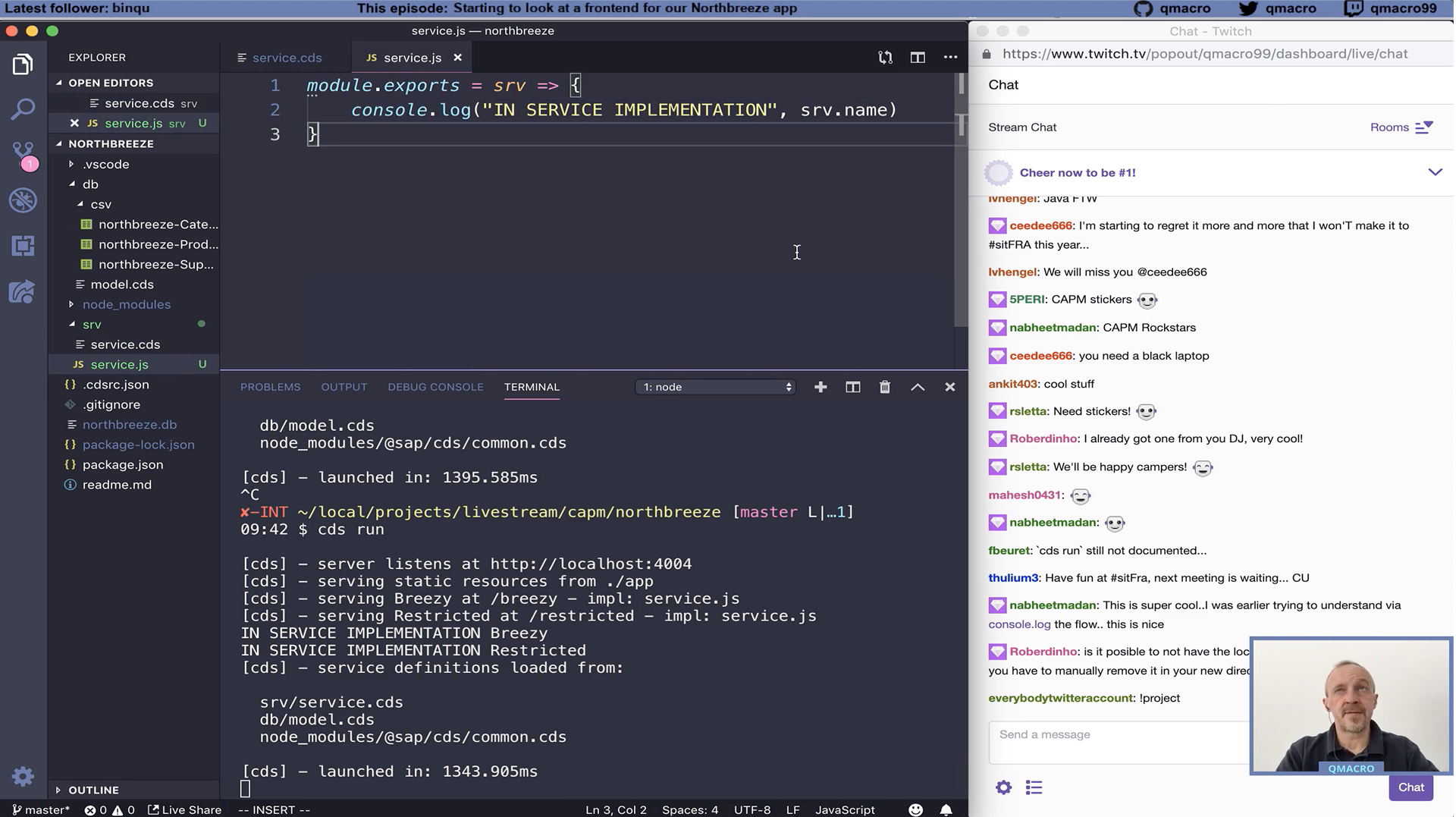 This session comes to you live from the location of the SAP CodeJam event in the AOK offices in Frankfurt. In this episode we investigate at a few more cool features of CAP and CDS and start to look at a user interface for our Northbreeze app, and even get to serve it from the CAP runtime itself.

00:01:00: Introducing Riley Rainey to this episode, who tells us a bit about himself and the work of the evangelists and developer relations as a whole, and mentions the CodeJams that are running that day. By the way, if you would like to know more about CodeJams or request one, visit the Community Events page.

00:05:00: Talking about the recent announcement relating to the SAP S/4HANA Cloud SDK – which is the availability of release 1.0.0 of the JavaScript version. This has been in beta for a while but has now gone Generally Available (GA). This is great news! See the post Announcing the SAP S/4HANA Cloud SDK by Henning Heitkoetter for more info on this.

00:09:00: Using npm info @sap/cds we look at the latest info on the @sap/cds module, we can see that it’s at version 3.7.1. I’ve deliberately not upgraded the version I have installed globally, which is still at 3.5.2. This resulted in some interesting effects, for new projects created (with cds init) which we explore at this point.

which is the globally installed one, and also looking what type of file that is:

This is also possible with the following sequence of commands:

00:17:45: Looking a bit more closely at the cds file, we see that it’s actually a symbolic link to another file elsewhere in the @sap/cds package:

00:18:35: A cameo appearance from Max Streifeneder, who, along with Former Member (who also makes an appearance a few minutes later – bearing gifts in the form of SAP Cloud Application Programming Model sticksers!) is co-running the CAP CodeJam there at AOK Systems.

00:23:20: Having a look inside the cds entrypoint, in particular, the “bootstrap” section which has this comment: “try to find a locally installed cds, otherwise launch this one”.

This is something we’ll try to debug, to see it in action.

We can now attach the Chrome Developer tools to this, to debug! Opening up the special chrome://inspect address we can see the Node process waiting for us to connect and start inspecting.

00:29:00: We stop on the use of require_local which is a module inside the global @sap/cds package, specifically in lib/utils/. This module attempts to load a project-local version of the module specified, and back in cds.js we see the result of this, if successful, is assigned to the _main constant, falling back to the main function that’s defined further down in this global cds.js script.

00:33:00: Discussing the differences (and similarities) between cds run and cds serve all.

00:35:00: Getting back to our Northbreeze project, to remind ourselves where we ended up last time, and starting to talk a bit about a function import on our OData service, something we haven’t previously considered. This causes me to go on a bit about how function imports are quite orthogonal to the rest of the OData protocol, how they are more like remote procedure calls, in the context of OData’s otherwise nicely RESTful design.

00:37:50: So despite my (mostly philosophical) reservations about function imports, we plan to take a quick look at how we go about defining one in the service definition in this Northbreeze project.

00:39:00: Reminding ourselves that adding a .js file, with the same base name as a service definition file, allows us to provide custom implementation logic for the contents of that service. You can use this technique to enhance or override standard CAP service functionality as you see fit.

00:40:35: To warm up, we add a service.js file alongside the service.cds file, with the following contents:

When we start the service, we see a whole lot of information produced by this console.log statement.

00:41:49: Changing the reference in the console.log statement from srv to srv.name, and we can more easily see that in fact the function we’ve defined gets called for each of the services defined in service.cds:

This is because we have both these services defined in service.cds, thus:

00:44:15: Next up, having replaced the body of the exported function in service.js with this:

… we can get a glimpse of the sort of information that’s passed to such a custom hook function.

we see, via a breakpoint, that the data passed to the function import definition contains all sorts of information, including, in data, the value of the to parameter that we passed (“dj”), which we now use in what we return, modifying the function so it now looks like this:

And with that, I end the stream a little bit early, to allow the CAP CodeJam participants to enter the room and get set up for the day’s session! We’ll continue the move towards looking at a UI layer next time!