With today’s MKS I will finally introduce the key improvement of the SCE Package Builder – the Package Building Optimizer. Having kicked-off the topic of detailed package building with MKS79, already spent 7 blogs on parts of the scope and not even touched the core of the feature shows the magnitude of the developments that went into SAP Transportation Management 9.6 (and of course the S4 version).

I already explained a bit of it in MKS79, but here is what comes out of the new Package Builder:

Each to be packaged item has a exact position determined by the PB Optimizer considering constraints like orientation (MKS80), stacking rules, and much more.

With the previous version of the SCE PB, the result looked like this:

The way the PB creates packages that can be built in the warehouse and loaded into a resource follows this sequence (of course respecting package hierarchy aspects – to be cartonized products come first, then the palletization happens):

It was clear that to become competitive in this area, a huge step forward was required. What looks simple on the pictures above includes many additional definitions and much optimization. It was also clear that we would follow our standard to not tackle this with an ABAP component, but a C++ optimizer (like for the routing and load planning in SAP TM). What’s new here is the fact that the SCE PB can also be used in other SAP applications, that might not have had used C++ optimizer engines before. Check the installation guides and the available documentation for this. If there is interest I can also spend an MKS on the basics of this setup.

How can detailed package building be activated?

This can be done in the enhanced Package Building Profile. 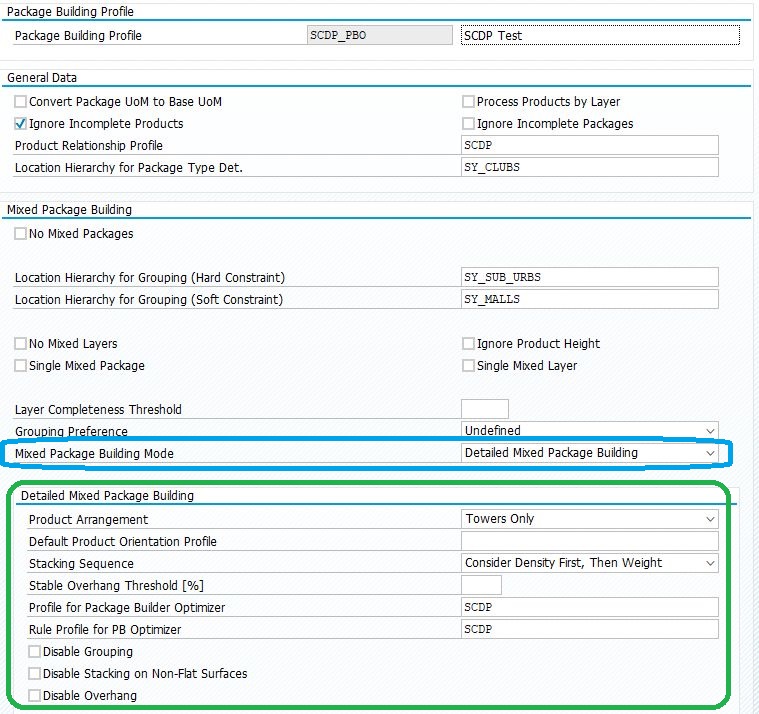 The new Profiles (Profile for Package Builder Optimizer and Rule Profile for PB Optimizer) can be found in the customizing next to the PB Profile: 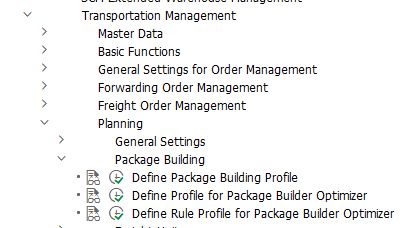 Note that if those activities are NOT available, the required business function is not activated. Remember, all of the described new features are in standard only available in SAP TM 9.6, but technically there starting with TM 9.4 as the SCM Basis is the very same. Officially the usage of those features is NOT supported.

As the integration between the application and the optimizer server is critical, this profile can be used to steer the behavior. Carefully read the documentation and field helps here as the settings can have a massive effect on runtime and result quality!

The functional behavior is steered by rules to be defined in the Rule Profile.

Those rules are optional. If not defined, the PBO will apply internal default settings. As soon as a single rule is defined, no defaults are applied. Also important here: Carefully read the documentation and field helps! So far the number of supported rules is still limited and very special.

With the new function available, SAP logistics applications become interesting for customers having the requirement to plan based on realistic packages and pallets. Transportation planning can happen now on pallets that can really be built like this in the warehouse as both applications can use the very same definitions and optimizer. The real physical positions could be used not only for manual instructions, but also for automated mixed pallet building.

Here is the link to the Detailed Package Building overview MKS: https://blogs.sap.com/2019/02/04/monday-knowledge-snippet-mks-79-supply-chain-execution-package-builder-enhancements-detailed-package-building/

Here is the link to the MKS overview page: https://blogs.sap.com/2013/05/21/monday-knowledge-snippet-series/