Let Us Be Persistent – HANA Adoption of Non Volatile Memory

I have been keeping track of Non-Volatile memory for HANA from the time I have read below article and watched several videos on non-volatile memory technology.

Finally, on 2nd April 2019 Intel has announced the general availability of Optane DC persistent memory. Optane is a new tier of memory that’s faster than SSD storage and less expensive than DRAM. But unlike DRAM, Optane is persistent i.e. it will keep the information stored on it even after system reboot. For thorough insight on Optane Technology, you can refer below whitepaper.

Intel has also introduced its 2nd Generation Xeon Scalable Processor, also known as Cascade Lake. The interesting feature of this new CPU is the support of new tier of memory (Optane DC Persistent Memory). The highest configuration available in the market that will support memory will 28 Cores/CPU. 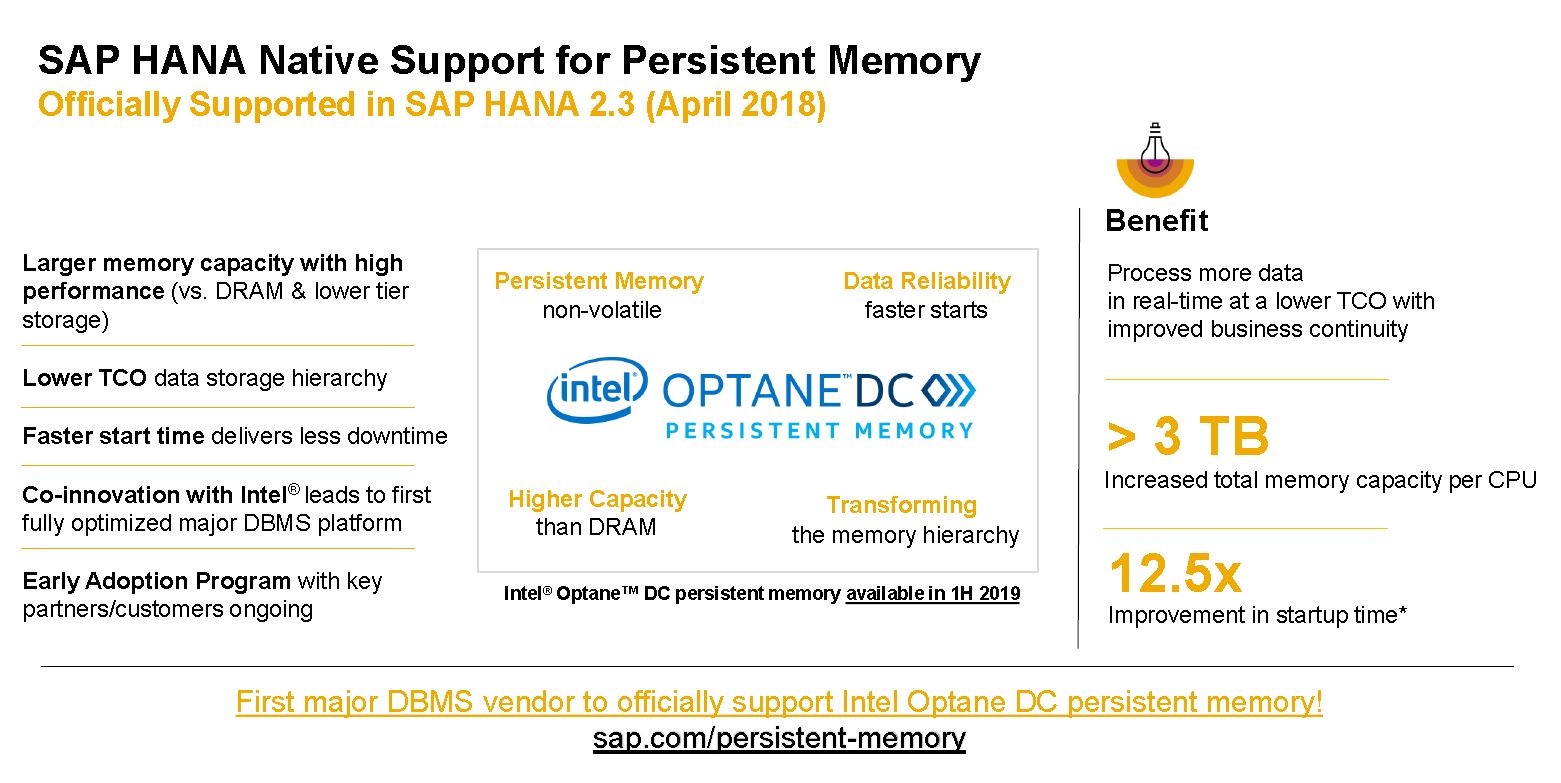 Persistent memory can be used for the main storage of column store table that is typically the dominating factor of data space consumption in SAP HANA environments. Other areas like delta storage, caches, intermediate result sets or row store remain solely in dynamic RAM (DRAM). Note that if persistent memory storage is enabled, data is still written to the data volumes but is simply ignored.

As column store main fragment will reside in persistent memory, so when our HANA system get restarted it won’t unload and load data during restart operation. It has been said in Intel Data Centric Innovation that the restart of 6 TB HANA server will get reduced from 50 minutes to 4 minutes. Really a thing every customer was looking for as this will save considerable time for any maintenance activity or uninterrupted outage. 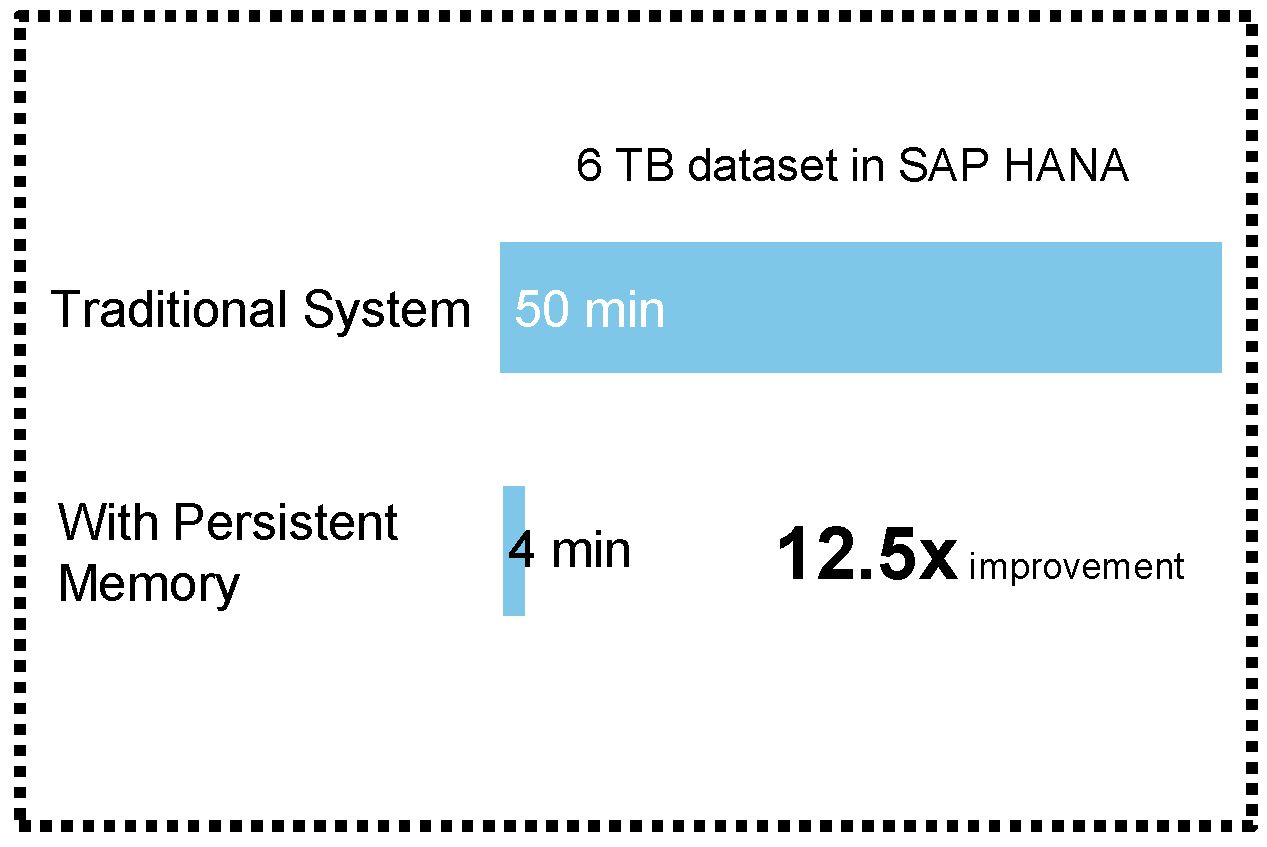 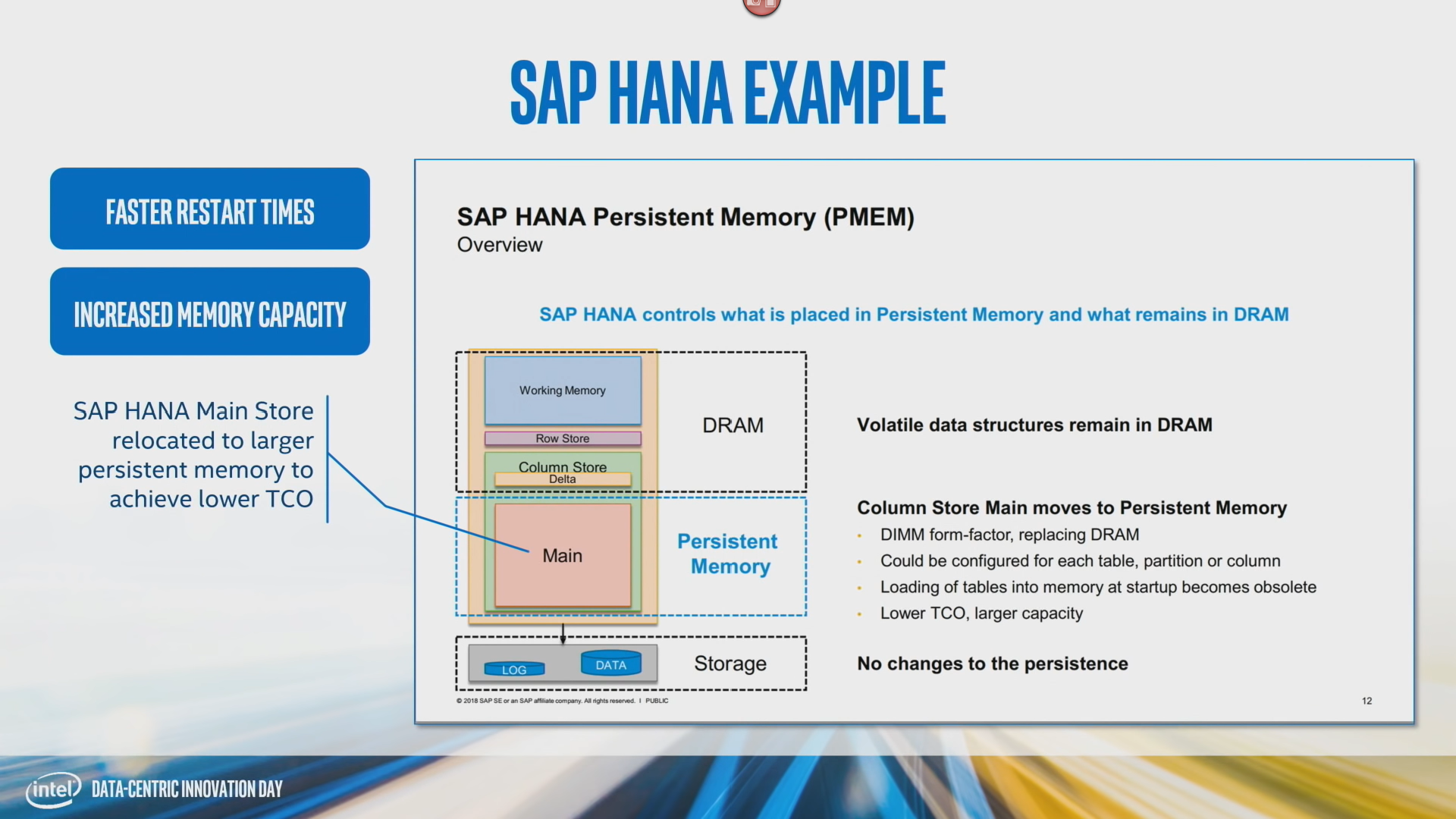 How core to memory ratio of 4.5 TB/socket has been calculated/decided for HANA? (This is basically my understanding)

On 2nd April 2019 Intel has also introduced 2nd Generation Intel Xeon Scalable Processors with 28 Cores/CPU which can support Intel Optane Memory and has 6 memory channel. Each memory channel can handle 2 memory slots (this are the slot where your insert DIMM which can be PMEM or DRAM). So, in total Intel Xeon Scalable Processor have 12 DIMM (6 x 2) slots. Minimum CPU available for any server is 2 (Link).

As per SAP, to achieve highest memory performance, all DIMM slots must be used in pairs of DRAM DIMMs and persistent memory DIMMs, i.e. the system must be equipped with one DRAM DIMM and one PMEM DIMM in each memory channel. Earlier we needed same set of DRAM DIMM module on the server i.e. all memory slot filled up with any one of the 32/64/128 GB DIMM.

So, in these 24 memory slots we will have 12 slots filled up with PMEM and 12 slots with DRAM 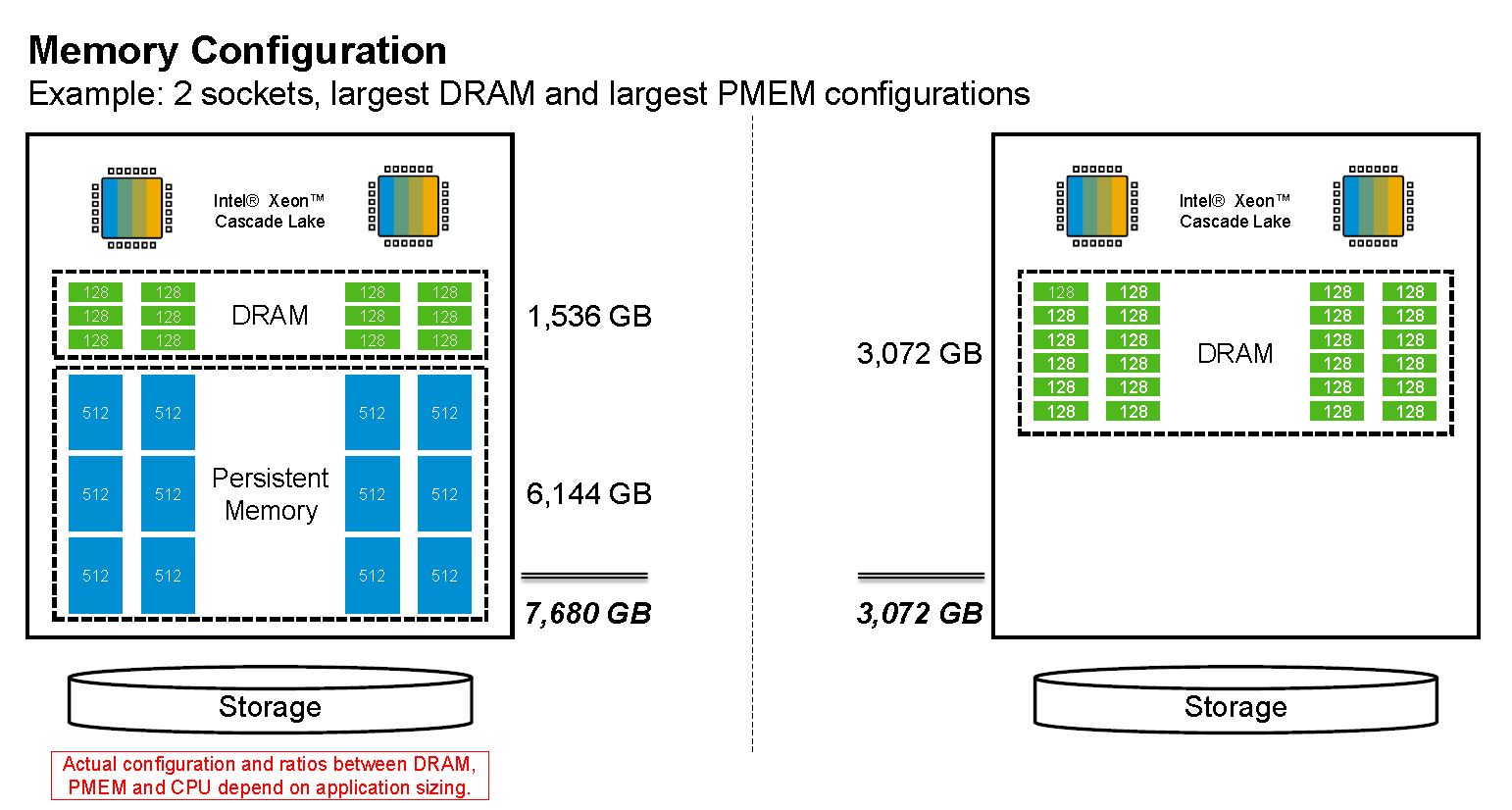 The only concern here is the availability of NVRAM, as there will be huge demand for persistent memory by hardware vendors and cloud giants. The reason for this concern is, at times there is/was shortage of 128 GB DRAM DIMMs in the market as well.

So even from cloud vendors, we can expect high memory VM instance instead of bare metal. Google Cloud is the first public cloud provider to offer virtual machines using Intel Optane DC Persistent Memory in Q3’18 as part of alpha program with 7 TB virtual machine. Recently in #GoogleNext19, Google has announced 12 TB virtual machine (Announcement Link). They will be providing even large Optane-based VM 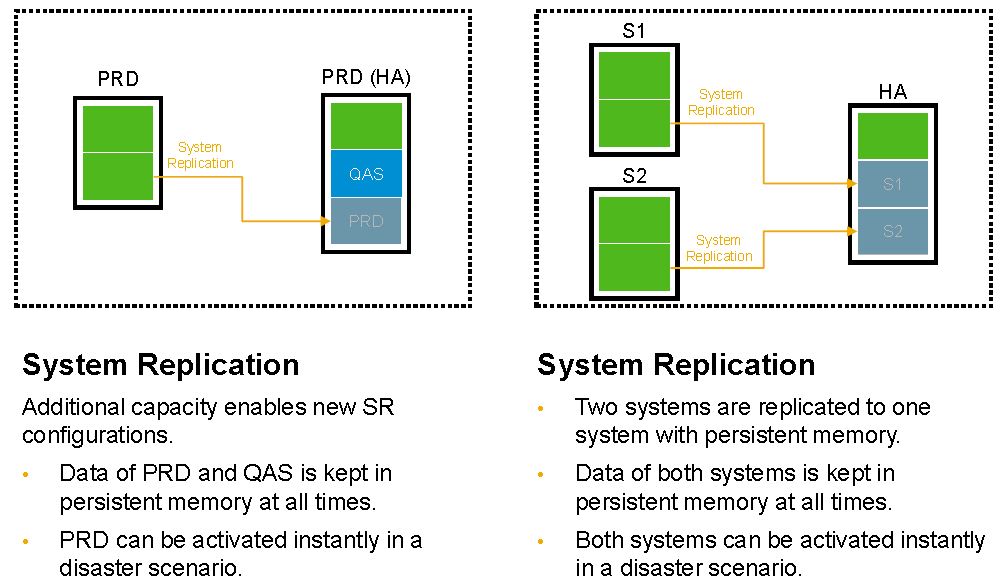 Currently there is no benchmark result released comparing HANA running on DRAM vs HANA running on mixed combinations, but we can expect a slight degradation in performance of HANA when it runs on mixed combinations. You can watch the video on Intel Optane DC Persistent Memory Performance Overview to get some idea on the performance benchmark of Persistent memory. Eagerly waiting for this comparison from sap, hardware vendors or partners. 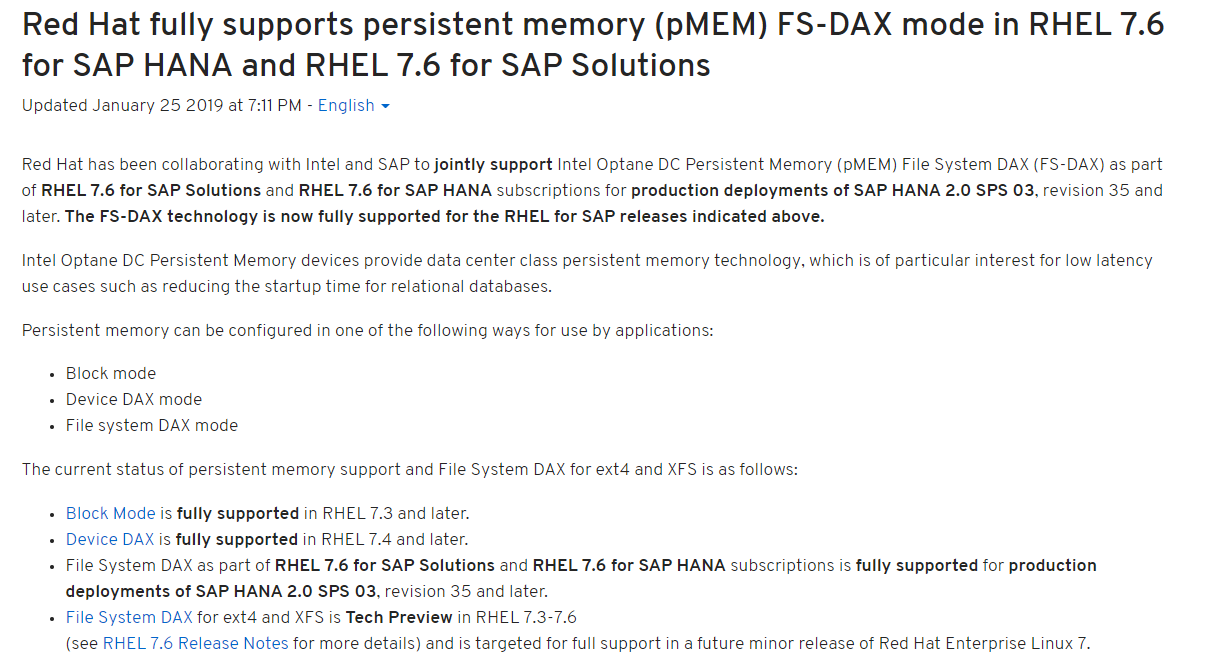 It will be interesting to see this new file system configuration/layout. Looking forward to find out how HANA perform with PMEM

To join the Live Virtual Expert series to learn about the new capabilities in the upcoming release (HANA 2.0 SPS 04) be sure to register via the following links:

Also, you can refer below links to read more on Persistent Memory

Feel free to drop a comment on your thought for Persistent memory for HANA and what you expect from new HANA 2.0 SPS 04.

Are there any customer stories, like the one Intel presented at TechEd last year, from those who have adopted persistent memory?