I hope these tips & tricks might save you some time when you build your first workflows using the SAP Cloud Platform Workflow Service.  This post is part of a series on the Workflow Service.

For very simple User Tasks you can configure a Workflow Form, which doesn’t require any coding. The next step up (more effort/more flexibility) is to build a UI5 component which can be displayed inside the My Inbox app.  It’s easy for this component to read the context and complete the User Task using the My Inbox API.

In my case this approach had a couple of drawbacks.  Firstly, my form is quite complex and I wanted to be able to use the full screen to display it (not just the detail pane of My Inbox).  Second, I didn’t want to put everything into the workflow context.  Instead, I wanted to save the key fields in the context and call my OData service (built with the S/4HANA Cloud SDK) to get all the field values.  A benefit of this approach is that I could use the same UI5 component to implement both the display view of my form (as launched from the Fiori Launchpad) and the approval view (as launched from My Inbox).

It turns out that calling your own OData service from your My Inbox component has some limitations.  It’s possible – see Call an External Service from a Custom Task UI – but I chose to launch the full version of my app instead.

If you want to use a custom UI5 component within My Inbox for your workflow you should plan on putting all the data in the context, and you probably won’t use the same component outside of My Inbox.

Don’t forget to add the workflow service to the manifest.js and neo-app.json files of your app, otherwise you’ll get a 404 when you try to confirm the user task.

When you Configure the Workflow Service Mail Destination you need to enter a username and password for an SMTP server (to send the emails).  If your customer doesn’t want to have their credentials used in this way there are cloud services (such as SendGrid) which can be used instead.  You’ll need to ensure however that this source doesn’t trigger the corporate spam filter when the emails arrive.

Your workflow doesn’t have to be arranged Left-to-right or Top-to-bottom (in the Workflow Editor).  A ‘loop’ pattern (i.e. four sides of a rectangle) can be useful because it makes it easier to build a flow between different components.  For example, you might have an approval flow that sometimes needs to be repeated or you might need a ‘short cut’.  Also, if you arrange your workflow in a similar shape to the pane in Web IDE (i.e. rather than being very long) you can see more of the workflow at any time.

Web IDE will allow you to rename the workflow in the Explorer pane (see below, right) but that will cause problems with artifacts like script files and email files, which are stored under sub-folders using the same id.  If you want to see a meaningful name for your workflow in the Admin app, set the subject property instead (see below, left) by clicking on the workflow when the Workflow Editor is open.  This value can contain context expressions so you can use the name or ID of the business object (like a customer or project) that the instance references.  NB This determines the workflow instance subject not the task instance subject.

You can call services in Cloud Foundry (from Neo)

Sometimes you might need your workflow (in the Neo environment) to call a service in the Cloud Foundry environment.  An example would be if you are using the S/4HANA Cloud SDK as your ‘back end’ in conjunction with the Cloud Application Programming Model (CAPM).

The workflow Service Task allows you to specify that the user details should be propagated in the call (usually the user who completed the last User Task).  This is called Principle Propagation and it means that you can make authorisation checks in the (called) service based on the logged-on user (not a system user).

This will be necessary until the portal and workflow services are both mature in the Cloud Foundry environment.  When that happens we should be able to work just within the one environment.

Customers sometimes want email notifications to be sent when users have an inbox item (like an approval).  This presents challenges because emails are insecure (they can easily be forwarded) and we don’t want to clog up everyone’s email inbox with hundreds of emails.  A justification for going with emails would be if there is an approval required urgently and the approver isn’t often logged-in to the Fiori Launchpad (FLP).

My current customer wanted emails but I wanted to encourage them to use My Inbox.  So, I decided to create User Tasks as well as an email notification.  A benefit of this approach is that users can still action the item if they have lost the email.  How to achieve this?

If you put the User Task before the Email Task it wouldn’t send the email until the User Task had been completed (by the approver making a decision).

The best solution I found was to put the Email Task and the User Task in parallel tracks without any timer. That is, the email is sent at (logically) the same time as the user task is created.  I added the unique ‘request ID’ (e.g. ‘10003476’) to the user task as a Custom Attribute.  In the email link I pass the task definition ID (e.g. ‘usertask1@testworkflow’) and the same ‘request ID’.

If there is no matching user task in the inbox my app displays an error message.  This approach ensures that you can’t approve the request just by guessing the url or by being forwarded the email.  You have to have the workitem in your inbox before you can approve it.

As I mentioned above, taking care how you lay out your workflow (in the Workflow Editor) can make it easier for a colleague to understand the flow.  If you need move a number of tasks and gateways at once you can select them with the Marquee tool.  To move them you click and drag, but you must click inside one of the objects (like a task).  If you click inside the selection but in free space, nothing will happen. 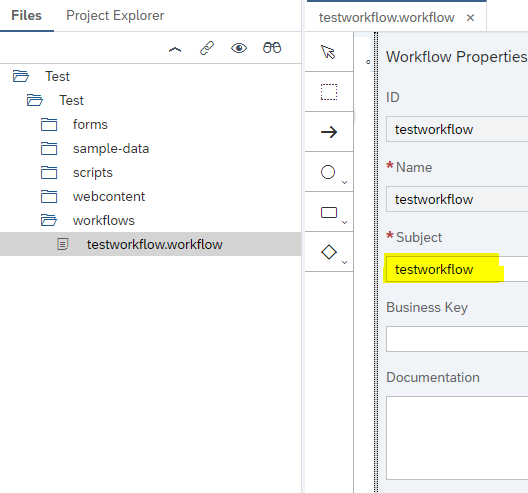 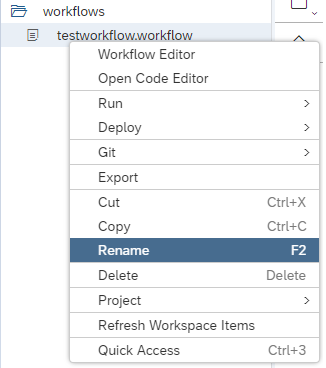 Thank you. This is very useful blog. I have not used custom ui in user task. Used only form, as it is easier for me to get started with user task. Anyone, who has not worked on UI5 development, will find it difficult to work with forms. when there is data type mismatch, it throws an error, which is hard to trace.

Thanks for you blog.
Is there any way generate the below URL from a script task  so that i can sent the workflow item form the inbox app as a link to the user?

Yes, I've done this before.  You can use a script task to set the url in a context variable.  Then in the email body of your mail task (html template) you can use expression binding to make that variable the ref of your link.

Obviously you need to remember that your url is going to differ across environments (sub-accounts, spaces) so you might want to set an environment variable with the right values and retrieve that in your workflow (service task).

Can you please tell me how can we retrive environment variables in service tasks? it would be a nice new blog 🙂

Thanks for you reply.

I have done the same as you mentioned using a script task. But the only issue here is how to set an envoronment varaibles and retrieve in the service .Lets say i have maintained the portal URL in the destination and using the destination in service task.What should i provide in Path,Request Variable,Response Variable .Should the URL be always maintained in destination or can we create a custom table and maintain in backend ?

Hi Vijay, it depends on the environment (neo or cloud foundry) and also how you are provisioning the OData service for the app. A Java app can read environment variables but that isn't the only way.  If you put the url in a destination you should be able to read that using a Cloud Platform API.

Hi Vijay, yes you could handle these two approvals using parallel gateways.  After the second parallel gateway tasks should only be called once so I suggest you raise an incident if you think this is happening