We had a lot of fun working on the Chemical Mixer demo which was presented last year at the IMTS Chicago as well as at the ITAP in Singapore. This year – the mixer grew in shape, accommodated more industrial components from partners, leveraged Industry specific standards as well as embraces more business processes which are accelerated by IoT based data. Let me walk you thru how we use the new features of SAP Leonardo IoT in the different facets in the Design to Operate scenario which was presented at the Hannover Messe in 2019.

Conceptually, the Evomixx mixer is producing chemicals based on a recipe that uses different raw ingredients. These are illustrated by a combination of Red, Green and Blue light signals. Different types of devices are mounted on the Evomixx equipment. Some of the interesting ones are Flow-meter and Level sensors from Endress & Hauser AG, Butterfly and Double seated valves from Krones AG, the entire equipment is controlled by a Beckhoff PLC (CX 5140). After a process order is created on S/4, it is passed on to SAP MII (Manufacturing Integration and Intelligence). This order is then executed by SAP Plant Connectivity which governs the low-level communication with the Beckhoff PLC using OPC UA standards. 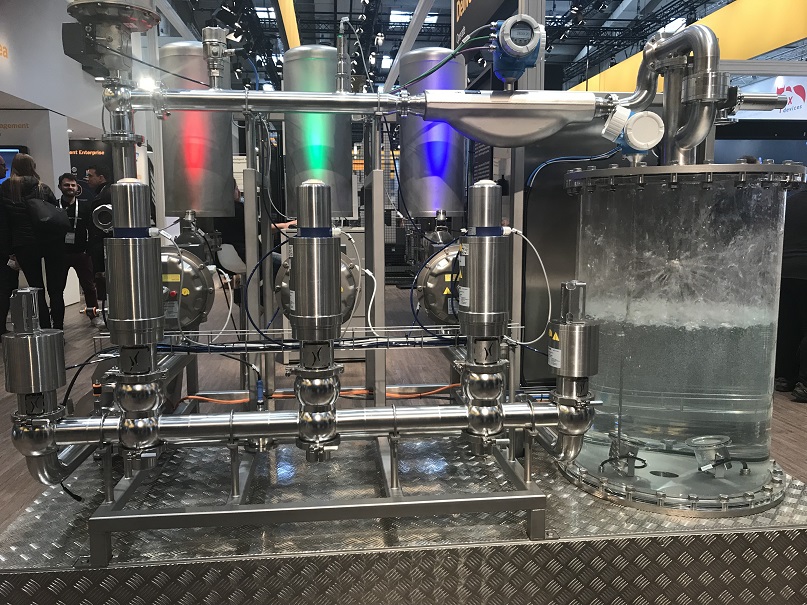 Fig.1 The flashy Evomixx Equipment with the Double Seated Valves at HMI2019

SAP Leonardo IoT also provides Edge Services which can be used to apply rules on Streaming data right at the edge. A Scalable, real-time, dependable, high performance data distribution service was built using the SAP Integration Framework on the Cloud Foundry landscape. This was used as a catalyst to distribute data within multiple services that needed the respective IoT Sensor data to enable intelligent business processes as well as historical data storage in the SAP Leonardo IoT. 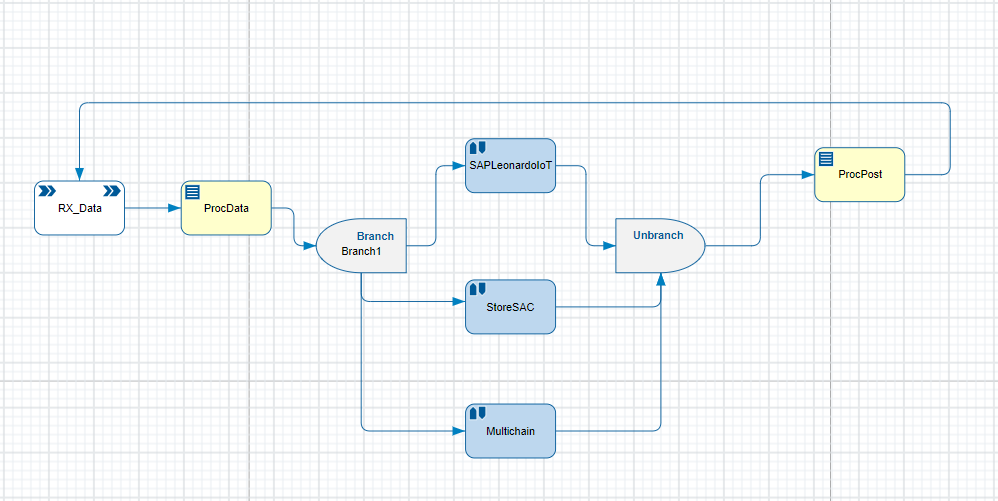 Fig.2 From the Equipment to the SAP Cloud enabling IoT Data in Intelligent Business Services

The Equipment master data are imported from the SAP Enterprise Asset management system into Asset Central. From Asset Central they are modeled with Indicators which can be used to persist time series data in the SAP Leonardo IoT. These Indicators are reflected with device identifiers and respective payload formats on the SAP Plant Connectivity. Between the SAP Leonardo IoT and SAP Plant Connectivity is a Data Distribution Service.  A high level view of the different components are show below.

Fig. 3 High level overview of the different components in the demo

There were 2 kinds of dashboards built. One was created with SAP WebIDE based IoT Template. This free defined UI has the possibility to combine data form multiple endpoints and visualize key indicators together with production quality data. It uses UI5 controls which were built as reusable components in the SAP Leonardo IoT. Customers and partners can reuse the template to build their own version of monitoring application much faster that increases developer productivity.

Another dashboard was made using SAP Analytics Cloud which combined data from different business systems. It shows a collaborative Digital Story which can give valuable insights into how the entire company is performing. Right from batch quality, average downtimes across production facilities till live data from the equipment are narrated in the story boards of SAC.

A Promass F300 device from Endress & Hauser is mounted on the Evomixx to detect the volume and mass flow, temperature and density of the liquids inside the mixer. This device leverages the SAP Leonardo IoT to persist real time sensor data in the SAP Cloud Platform. Endress & Hauser has built a Heartbeats Fiori application on the SAP Cloud Platform. This application reads time series data using the IoT APIs, uses custom algorithms to identify the health of the device on the Mixer. If the algorithms detect any anomalies on the flow-meter, they automatically generate a notification and push this to the Reliability Center.

Here, a plant manager or a maintenance expert can be alerted of the anomaly. Based on the options offered by the Reliability center, the plant manager can create an internal maintenance order for the in house expert.

Fig.7 IoT data in the SAP Field Service Management – ready to be dispatched to technicians

Additionally, he could also create a service ticket via the SAP C4C system and plan a maintenance dispatch using the SAP Field Services Management tool. Once this ticket lands on the SAP FSM tool, the dispatcher can plan this ticket based on available skills to a technician. Once the planned and dispatched, the tickets land on the respected technician via the SAP FSM Mobile app.

As we produce chemicals and shown in the previous mixer version – we also integrated the production order and recipe data in the SAP Multichain Services. It leverages the History log app which is based on the “Proof-of-State” results to generate blocks inside the stream.

Fig.8 IoT data as seen in Streams on a SAP Multichain Dashboard

As the technician gets notified, he could use the Chat bot which leverages Conversational AI to understand in detail, what exactly happened on the Mixer. He can also get diagnostic data via the app to understand where a potential failure could have happened before he even arrived at the location. In theory, he could bring with him spare parts that should be replaced due to a specific error code for example. 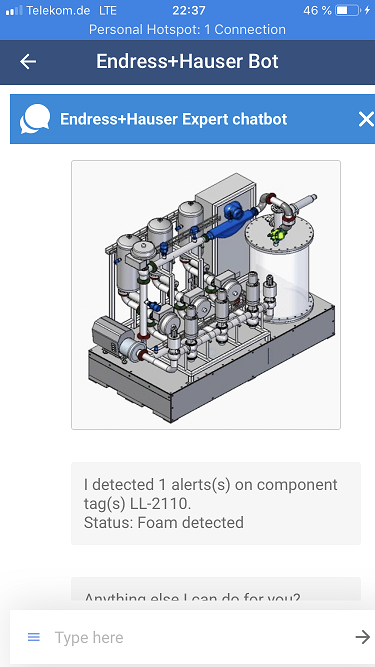 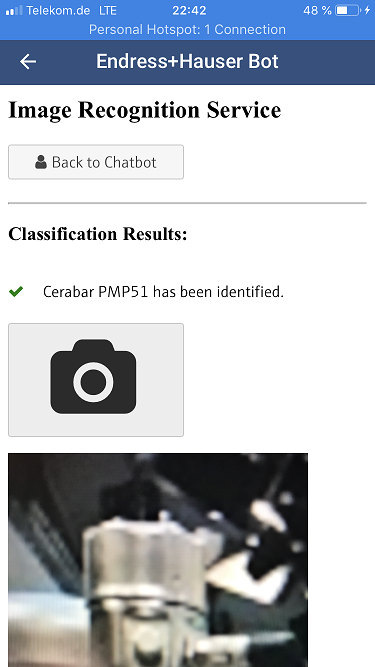 On arrival, he could examine the Flow-meter and if he identifies some assets for which he might need additional data – he could take a picture of the respective device and feed it to the SAP Machine Learning algorithms. These services, would identify the device and such information can be used to fetch a user manual from Asset Intelligence Network, or help diagnose the problem much faster than before.

A compelling and challenging story, fully integrated from the device till enterprise processes – often requested by customers to be shown on the show floor is presented in demo. This was created and presented at the Hannover Messe 2019. The demo showed a lot of integration aspects right from Industrial equipments, open standards, SAP products around Internet of Things that enable existing business process and new innovations.

Thanks to the entire SAP Leonardo and Digital Supply Chain teams on an awesome collaboration.

Great article, thanks for sharing.

Is there any documentation on how to get the SAP Integration Framework installed and configured on the Cloud Foundry landscape?

Thanks for your interest on SAP Products. It is possible to use as a CF app, there are many AWS docker variants on the same code line.  I would happy to help you get in touch with the right team at SAP. Would you be kind to write me an email please ?