Any form of statistical analysis goes around a life cycle that starts from Data Collection and goes a way forward towards partitioning, cleansing, visualizing, analyzing, performing hypothesis testing. Throughout this life cycle it is considered that data scientists spend most of their time in cleansing the data. It is a well-known fact that performing a downstream analysis with an Incorrect data often leads to In-correct results. In this Blog I have explained the Outlier correction Methodology which is one form of Data cleansing technique used in IBP-Demand Planning.

In IBP there are three ways to perform data cleansing

Out of the three methods, I will cover the Outlier Detection and Correction part which is one of the Pre-Processing steps to be done before performing downstream analysis.

An “outlier” is a value in the historical data that lies outside the accepted range of values, which is also called the tolerance lane (Beyond Upper and Lower Boundary). There can be a variety of reasons for an Outlier to exist in the data set that includes data entry error, sudden spike due to socio-economic factors etc.

Techniques to Handle Outliers in IBP

Outlier Detection Method helps to identify the potential outliers from the huge dataset which if unidentified can have a drastic change on the forecasted data. Below are the two methods to Detect Outliers in IBP.

The system checks whether the data points are within the interquartile range, which is the difference between the third quartile and the first quartile of the data. The values that are not within this range are identified as outliers.

Normally the best way of interpreting the Interquartile range is to use Box Plot technique.

In this method the data is segregated into Four quartiles (Q1, Q2, Q3, Q4) based on the value that exist in the dataset. Then interquartile range (IQR) is obtained by taking the difference between the third and first quartiles. (IQR = Q3 – Q1).

To detect the outliers using the interquartile range method, the system calculates a lower and an upper bound using the first (Q1) and the third (Q3) quartile:

Multiplier is often defined within 1.5-3.0 as per the business requirement. 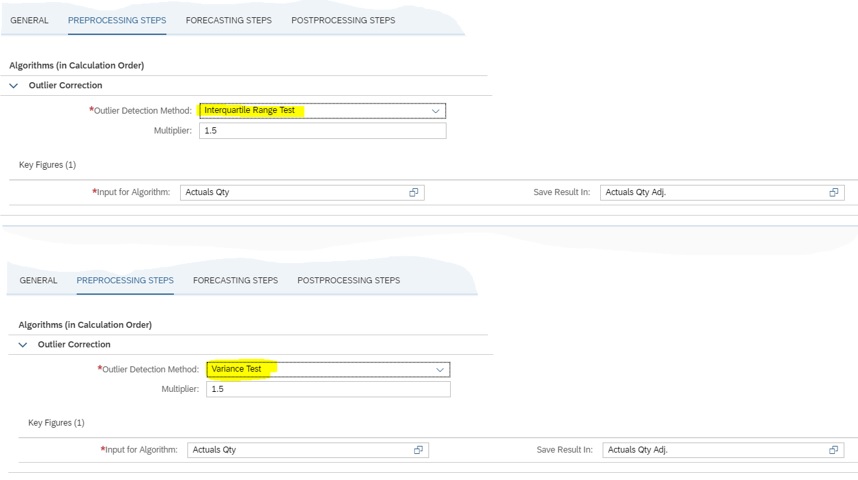 Variance is often interpreted as the spread of values in the dataset, which means how much a data point is spread out from the mean.

The system checks whether the data points from the dataset (Historical data) deviate from the mean by more than the standard deviation multiplied by a constant. The value that deviates larger from the mean is identified as outliers.

To detect the outliers using the variance test method, the system calculates a lower and an upper bound using the mean and the standard deviation (SD) of the historical data: 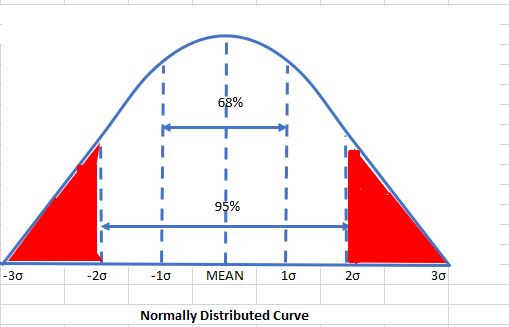 The values that fall outside of this tolerance lane are considered as outliers. The multiplier influences the sensitivity of the outlier detection; using lower values for the multiplier will tend to detect more historical values as outliers, so again choosing the correct multiplier plays a major role based upon the business requirement. 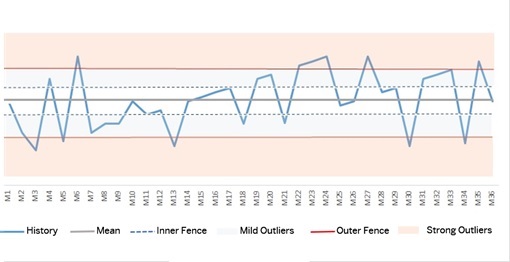 With the above-discussed method potential outliers can be identified from the data set (Historical values) now it is necessary to correct those identified outliers with anyone of the below methods as per the business requirement.

There are six methods for correcting Outliers in IBP

The system replaces outliers with the average of all key figure values calculated for the historical periods and does not take the outliers into account for the calculation. This is the default outlier correction method.

The system replaces outliers with the average of all key figure values calculated for the historical periods.

The system replaces outliers with the middle value from all key figure values calculated for the historical periods and does not take the outliers into account for the calculation.

The system replaces outliers with the middle value from all key figure values calculated for the historical periods. The outliers are excluded from the calculation.

This is not an Outlier correction method, but simply an outlier detection is used for information purposes only.

This method is used only for information purposes. No outliers will be corrected if we select this method.

2.Adjustment to Seasonality and Trend

3.Adjustement to Seasonality and Trend with Tolerance

Outliers are calculated using the Tolerance range method. But the only difference here is a system also considers Trend and Seasonality within the selected data before performing the outlier correction.

In this blog, I have explained only the Outlier correction method ‘correction with Tolerance’ and covered new Outlier correction methods for Trend and Seasonality Introduced in IBP-2011 Version. Other methods of Outlier Correction are all self-explanatory and hence I am not covering it as a part of this blog. So with this, I would like to conclude that any forecasting model if it needs to obtain a better accuracy it requires a defined pre-processing step which should cleanse the complete dataset.