What to do when faced with misinformation or ‘fake news’?

This blog is an unplanned sequel to the article I recently published about How to avoid accidentally spreading ‘fake news’  when sharing links on SAP Community. This follow-up post was prompted by a comment from Bernhard Luecke who wondered about “what now?” after reading my earlier article.

The implied suggestion in the other post is to avoid spreading misinformation or fake news by making a deliberate decision to not share a link to an article when you are not sure – after some fact-checking – about its credibility. If nobody shared fake news it couldn’t spread like a virus after all. But, as Bernhard mentioned, there are times when you want to respond or when you want to make others aware of the questionable nature of an article. So, how could you do that without – by just mentioning or linking to the article – spreading it further?

Caveat: I’m not an expert in fake news and how to combat that, but I’ve picked up a few things through my involvement with Skeptical Science, a website devoted to debunking misinformation (aka ‘fake news’) about human-caused climate change. I wrote about this non-SAP-related part of my activities in a coffee corner thread. So, what I’m going to mention below is based on a science issue, where you can apply the scientific method and where you have peer review to assess research results before they get published. A lot of stuff which gets shared far and wide on the internet is not about “hard” science but about topics where personal views and values play a large role and where there’s not necessarily a correct answer, just one which perhaps has more percieved advantages than disadvantages. Therefore, not all the pointers will apply to all the potential fake news you happen upon, but it should help for anything where there are for example hard numbers to back up and verify claims or where the correct answer is in fact known.

To begin with, decide who you are writing for. If you get the impression that whoever spread the misinformation did so knowingly and on purpose, than it might be pointless to try and respond directly. It might then be a lot more effective to write a comment for all the others reading along who are perhaps not even getting involved in the exchange.

What I usually try to do when I wade into comment threads is to use the misinformation as a hook to share some actual facts about the science and to also explain why the misinformation is misleading. This has the potential to inoculate people not just against the particular misconception but also against others employing the same method to mislead.

When science gets denied five main techniques have been identified regardless of wether the topic area under discussion is human-caused climate change, evolution or smoking to just name three “popular” ones.

These techniques can be summarised with the acronym FLICC. But perhaps, a cartoon is even more helpful (or at least adds some fun!): 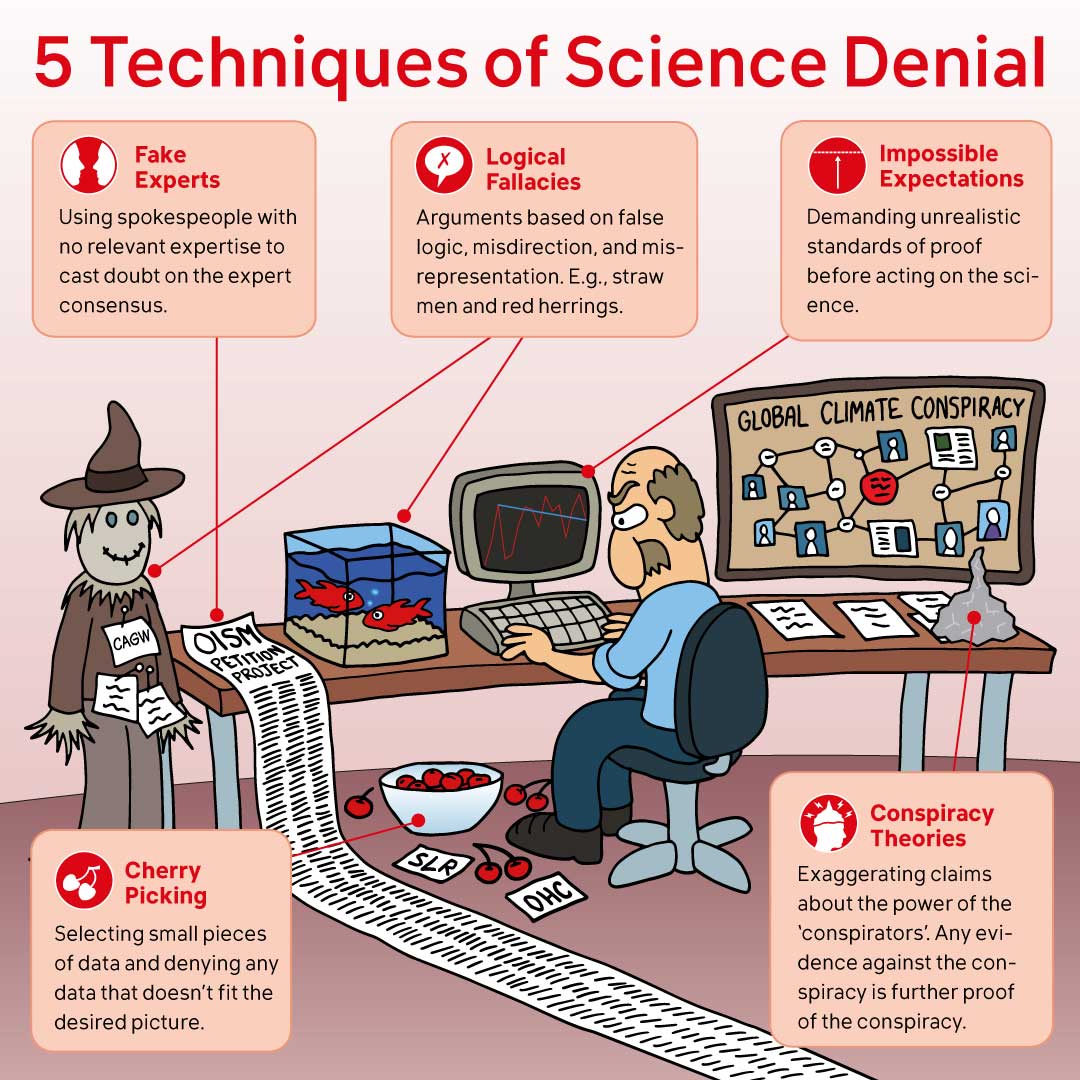 What to be aware of in your response

As mentioned in my response to Bernhard one thing in particular to keep in mind is what’s called the “familiarity backfire effect”. This can occur when people are not paying enough attention to what they read or hear and even though this is not quite as strong as thought earlier it doesn’t hurt to avoid it regardless.The best way to do this is to always start with the factual information and thereby put the focus on what is right instead of what is wrong.

It’s often important to mention the misinformation somehow and the recommendation is then to preceed the mention with an explicit warning like “There’s some misinformation making the rounds which states …. but this is wrong because …”.

A good place to start looking into backfire effects is The Debunking Handbook which explains these things based on climate science and how to counter the misinformation about it. You can find it on Skeptical Science (you’ll also find links to the updates on the familiarity backfire effect there).

If you like to have a kind of schema for debunking misinformation, the Fact – Myth – Fallacy structure might be helpful. 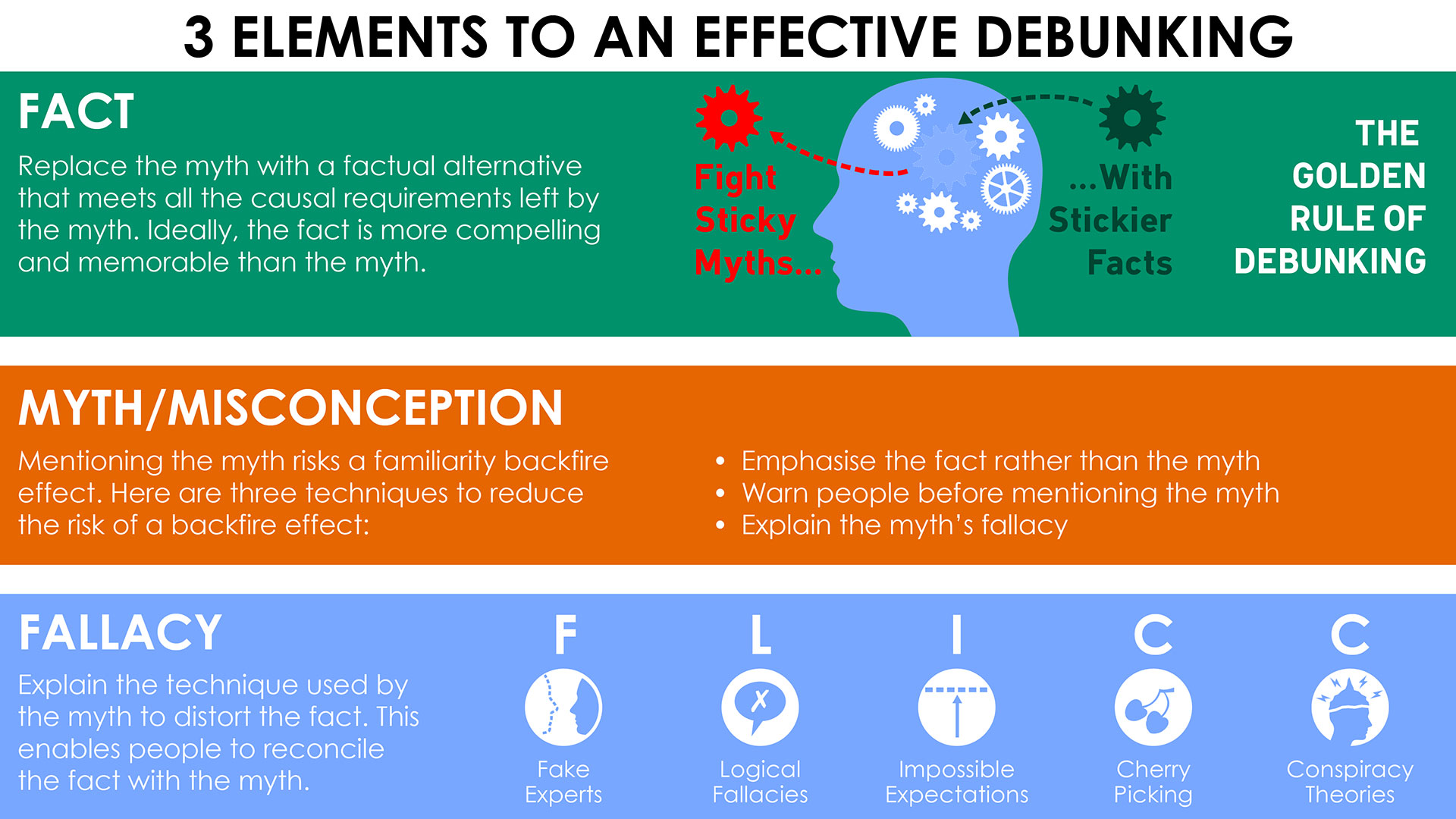 Some more tips and resources

If you don’t want to give a questionable article additional exposure or link-clicks, you can mask the target URL, by generating an archive link for the article (if the website doesn’t block this). So, for the Brightworkresearch article which prompted the initial blog post you could first go to archive today, drop the URL into the red box, wait a bit until the archive is created and then share the generated short link instead: https://archive.is/QsNLZ.

In case you’d like to dig deeper into this topic, here are a few links which might be of interest:

The Fact-Myth-Fallacy slide deck – a powerpoint presentation consisting of 40 slides, each with a short debunking of a climate-related myth utlising the debunking structure mentioned above

As this post can admittedly be judged as at the very least borderline off-topic for SAP Community – even if posted under “Personal insights” – I’d be interested in your feedback about this type of more general topic to write about every once in a while. But, I’m of course also interested in your thoughts about “FLICC” and the “Fact-Myth-Fallacy” structure. Do you remember any occasion where either of the two would have come in handy, or can you think of instances where they could actually be applied in a SAP-context?

Good write-up on a very important topic! Thanks for that.

This is a very comprehensive approach to "how to know whether something is bullshit" with many examples, tools and real-life cases.

It also introduces the fact-checking website SNOPES.COM which should be on short-dial for everyone reading online-news.

Anyway, thanks again for this well-written piece on internet literacy.

Thanks for the feedback, Lars!

Yes "Calling Bullshit" is great - when I watched the videos last year, I somehow got the impression that Carl T. Bergstrom and Jevin West had lots of fun with their students! I'm still hoping that they put their lessons into an actual MOOC so that more people can work through their material.

There are quite a few fact-checking websites, I could have mentioned and Snopes is definetly one of them. I also regularly use Sourcewatch,  RationalWiki, Media Bias Factcheck, or specifically for misinformers in the climate science space Desmog's research database.

A blog about an important topic and interesting links. Great to see that fact checking gets attention.

I like to add that it is hard not to be trapped by the “techniques” you mention, we all have to watch out. In your preceding article “How to avoid accidentally spreading ‘fake news’ when sharing links on SAP Community” it seems you are at least close to falling into the traps “Cherry Picking” and “Logical Fallacy” when you quote Paul.

You take an article by Shaun Snapp as case study but your choice of quotes is “focusing on select pieces”: aspects like HANA performance and code push down, not even mentioning the essential topic of this article. Of course this does not imply you are “ignoring anything conflicting with the desired conclusion” as you write above, but nevertheless “cherry picking” seems to be an appropriate term.

The “Logical Fallacy” is even more obvious as you quote:

“If the articles that Shaun writes were true then everyone who works with SAP should be very worried. However, not everything on the internet is true, as we know.”

Although not explicitly stated, the reader (especially a reader who does not want to be very worried) completes this thought like this: “…and therefore these articles are (most likely) not true”. This is a classical logical fallacy. The undoubted fact that not everything in the internet is true does not contribute anything to the credibility of a single article or articles of an author as a whole.

To illustrate, let us modify this paragraph to a much more important topic you introduce in your blogs:

“If the articles that climate scientists write about global warming were true then everyone who lives on this planet should be very worried. However, not everything on the internet is true, as we know.”