If you were a member of our community before October 2016, when it was still called SAP Community Network (SCN), you earned points and badges as part of the gamification and reputation system that we had on that previous platform. When we re-launched the community as “SAP Community” on a new platform in October 2016, all of the points, badges, and reputation you had earned prior to the cut-over date were rolled into a “Legacy Reputation” section in your new, universal profile, and you and everyone else started over again with new missions, new badges, and (hidden) karma credits instead of (public) points.

Beginning today, and continuing over the next days, we are breaking down some of those barriers between your previous reputation and your current reputation. Everything you earned in your account–whether last month or five years ago–is yours and part of your reputation overall here in SAP’s community, right? So we want to reflect that.

The image below shows in a nutshell what is happening in the Reputation section of your profile with this rollout. Each of these changes is discussed in more detail below the image. 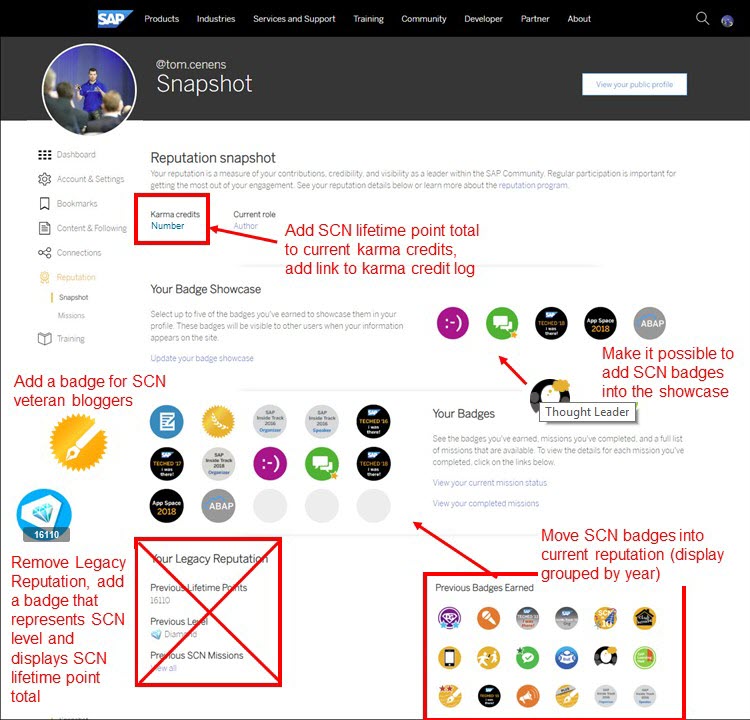 (Note that your karma credit total remains hidden from public view. Only you and the moderators can see it.)

Restoring likes and views on blogposts accrued before October 2016

In addition to these first updates, we will be rolling out some more big changes in the Reputation section in your universal profile, as follow:

Your badges earned in SCN prior to October 2016 will be merged with your current badges, and all of the badges will be displayed in one set that is segmented by the year each badge was originally earned. (Note: in the case of non-automated missions such as Featured Contributor, the badge will appear in the year the badge was originally awarded. In the case of missions awarded retroactively for the time period when we had no missions live in the community, the badges will appear in 2018; for example, SAP TechEd Attendee 2017).

Bringing the SCN badges and current badges together this way will enable a very important feature: you will now be able to display not only badges you earned in SAP Community since October 2016 in your Badge Showcase, but also badges you earned in SCN prior to that date. Did you earn the Thought Leader badge or Super Answer Hero in the past, for example? Now you can proudly display that badge along with more recent badges of your choosing in the 5-badge Showcase.

Removal of the Legacy Reputation section

Another element of the revised reputation in the profile: Instead of displaying a Legacy Reputation section with your SCN level and icon, and your SCN lifetime point total, we are removing that section entirely and replacing it with a single badge that shows the SCN level you earned (for example, Bronze, Topaz, etc.) with your SCN lifetime point total on it. That badge will be displayed along with all of your other badges, meaning you can also add it into your Badge Showcase if you like.

Since karma credits are valid only in the Questions and Answers (Q&A) area of our community, we felt that veteran members who were active mainly as bloggers on SCN and SDN might need a little more recognition than the addition of their lifetime points to their karma credits provides. Therefore, we are giving those veteran bloggers who met certain thresholds of published blog posts and positive feedback before October 2016 a special badge: the Master Bard badge. This badge is being awarded to a little over 600 members, as a way to highlight their previous blogging achievements in our community.

(One thing to be aware of: if you notice an entry in the karma credit log disappearing, that is because the activity was cancelled by the member who originally took that action. For example, if an answer you posted was first accepted by the OP, and you see that karma credit increase entered in your karma credit log, but then the OP un-accepts the answer, the original increase will disappear. We do hope to improve this by adding cancellation actions as entries in the log eventually.)

Taken all together, we hope these changes will allow our members to more easily display their past and recent reputation elements in a way that gives others a more rounded “picture” of their achievements here.

Not sure that the idea to add old SCN points to the new karma credits is a good idea! To my mind we are adding apples to oranges because point calculation logic is different for old SCN and new Community.

In old SCN it was:

Due to significant number of "Useful Answer" points in SCN, the average number of points per question was higher then in new Community.

I like it. 🙂 The reputation tab will look a lot tidier without losing the information currently present.

Looking forward to the changes to come, mostly to the karma log.

Audrey Stevenson - I noticed the features have caught up to your blog, and I am now proudly featuring the SAP Community Beta Tester green bug badge that you presented me with a TechEd badge sticker in 2016.

I like that you've also chosen to include Pay It Forward into your showcase.

This was also inspired by you - as I recently added a linked account with personal email login.

Huzzah! I gave my team performance goals to earn badges and gain points.We were all disappointed when the portal was upgraded/improved and much of the legacy did not port over. Thus I lost all that momentum with them to be active participants on the SCN. This is a step in the right direction.

Is there a possibility to get the badges and points of a former profile?
I moved the company, hence I have a new profile and all old badges are gone ...

We do not have the ability to merge accounts. However, you can link the profiles so that people who see your current profile can also see your previous one with whichever badges were earned there. For more details on profile linking, see this post: https://blogs.sap.com/2017/12/14/hey-look-its-both-of-the-tammys-together/. The screen shots may be a little outdated, but the instructions should still apply.

Looks my old profile has been deleted 🙁

Looks like we found your old profile, and they've now been linked at your request.

Thanks a million Audrey 🙂

This is great  - the reputation page is looking much tidier.

Thanks for you continued efforts to make this is the best community site.

This idea of adding Karma points to old SCN points is really great and I support this initiative. All those old SCN points which I had to earn with hours and effort is not getting lost.

I can see people arguing this strategy with following points.

I have responses to these points.

I agree... the contributions and efforts on the old SCN should not be eliminated as they have contributed to the SAP ecosystem we have today.

this is an older blog post, and in the meantime these changes were implemented, i.e. the points from SCN were added to the karma credits of users who had SCN points, and the badges from SCN days are now part of users' overall Reputation section in their profile.

And an upvoted answer is today's equivalent of a helpful answer in SCN days.

Good afternoon,
A doubt today when entering my profile and the topic of reputation.
I realized the following all Badge, just disappeared from the profile
Both from 2019 and 2020, leaving only openSAP.

The badges you earn are always tied to the account that you used doing the activities that earned those badges. I see you have linked several profiles, and the other badges are shown on your other (inactive) profiles. We are not currently able to move reputation elements to other accounts.

I think, an option to manually add SAP certification acclaim badges should have been provided. Right now, it appears under "Training" section of the corresponding account and does not get displayed under the other linked accounts. People often use different accounts for writing certifications and blogging.