As majority of us has worked on SAP BW and have written ABAP routines in transformations in BW to derive the business logic, we often noticed the performance issue while loading the data into DSO, Info cube or master data info object.

There could be numerous reasons for this:

During processing of ABAP based BW Transformation, the source data package is processed row by row.

But in HANA based BW transformation, the data can be transferred directly from source object to target object within a single processing step. This eliminates the data transfer between DB layer and Application layer.

**Note : Some user defined formulas in transformations could prevent the code pushdown to HANA. How to Create SAP HANA Transformations:

Pop-up will ask for confirmation to replace standard transformation with expert routine. Click on the “Yes” button.

System will ask for ABAP routine or AMDP script. Click on AMDP Script.

Scenario 1: One to One Mapping from Source to target using SAP HANA Expert Routine

Here in the below code, we are selecting fields from intab and assigning to exporting parameter outTab (no additional logic in transformation). 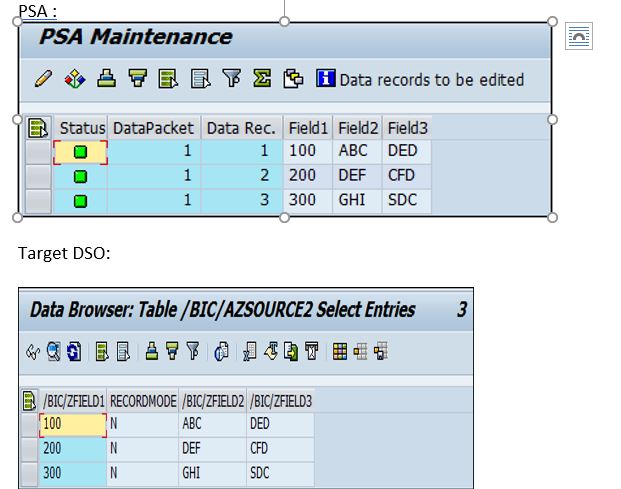 Scenario 2: Update the Deletion Indicator in target DSO when the records get deleted from Source system using SQL Script

If we build this logic in ABAP, we would need to match the target records (one by one) with source object data for all data packages and update the deletion flag with X if a record is not present in source object. This could lead to performance issue if the records are in high volume and the SQL script logic is much simpler than writing the logic in ABAP.

In SQL, we can achieve this by using SQL functions:

Based on that we will build our logic.

For the first-time data load the value of LV_COUNT value will be zero. In this case, we need to transfer all the source data as it is to Target DSO with deletion flag as blank as we don’t need to update the flag.

For the successive date loads, we need to compare the existing records in Target DSO with the latest records coming from Source and update the deletion flag accordingly.

**say after first load, the record with field 1 = 500 got deleted from source system. In that case, we need to update    the flag with value = X.

We can declare the variable by using DECLARE statement.

2. For the successive loads, we need to compare the existing records in Target with Source as mentioned above.

Here lv_count is variable and /BIC/AZSOURCE2 is target DSO and I have copied the content in temporary table – It_target.

For this case, I have counted the number of records in Target DSO and put it in lv_count Variable.

/* copying the latest record from source to temporary table it_zsource1*/

*It_target – is the target dso

It_zsource3 will have data shown below and this would be the final output which we need to load it in outTAB:

This will be the final output we required and assigned it to outTab: 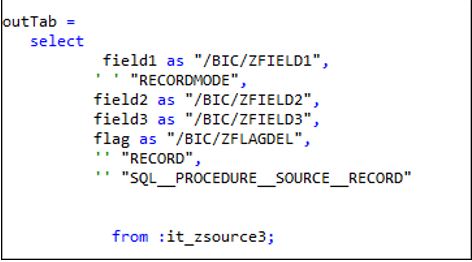 Below else statement is for first time load when lv_count = 0 and transfers the records from source as it is to target. 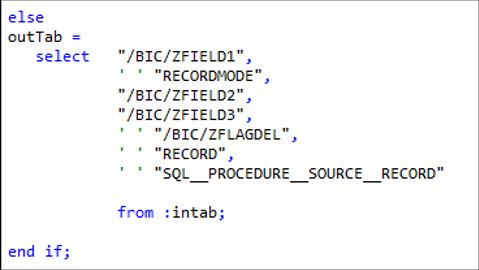 Scenario 3: use of Windows function in SAP HANA SQL Script: 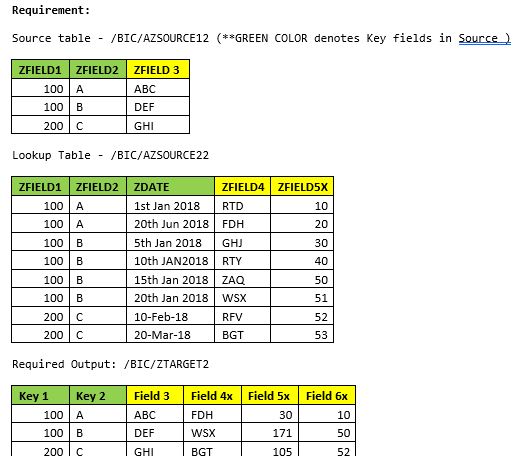 Key 1,Key2, Field 3 should hold the value from source table

Field 4x should hold the latest value for field 4 from lookup table based on dates.

Field 5x should hold the sum of all the values of Field 5 based on same keys.

Field 6x should hold the previous value of the latest transaction.

In ABAP Routines, this would be very complex in reading the previous transactions and updated the value of the field. But in SQL script, we can use windows functions with which the complex computations can be done in a simpler way.

There are many windows functions available in SAP HANA SQL Script:

And many more are there.

In my scenario, I will use the windows function Rank () and Lead () to achieve the required output.

Define the It_lookup temporary table and copy the records from Lookup DSO.

So It_Lookup will have data : 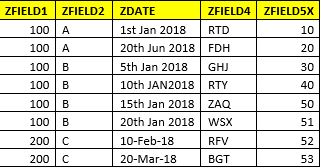 Then, I have ranked the records using RANK() window function based on date in descending order and also used the windows function LEAD () to get the next value after the latest transaction.

For requirement field5x : we need to sum the values field 5x for the same keys.

This is the required output. Hence assigning the fields from It_tab3 to Outtab: 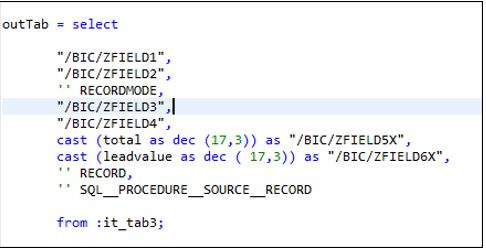 AMDPs provide powerful abstractions that enable ABAP developers to combine the benefits of the high-speed in-memory execution of SAP HANA with the well-established ABAP run time and life cycle model. Along with CDS Views, CDS Table Functions, and OPEN SQL, allow ABAP developers to renovate their existing assets and create new and innovative applications for SAP Business Suite on SAP HANA without losing the platform-independence of ABAP.

Can you share if currency conversion possible in AMDP Field Routine ?

Yes we can.Please go through below blog.

Extremely informative. It's perfect. Thank you.

thanks for the blog post and the efforts you have put into it. I just started to learn SQLScript and how to create AMDPs and your post and the examples were great to get started.