Get that Match! Syncing iFlow with ICO

While working with the SAP PI/PO we generally have two options to develop our objects – Java Swing client – old way and  NWDS – relatively a new way.

And many developers like me, who has been working with SAP PI since it’s version 2.0 (formerly known as XI) prefer to build the configuration objects using the Java swing clients. And changing them later in the swing client too.

However, with the new iFlow feature and NWDS it is better to build the iFlow in NWDS first and then deploy it. This will help us to present the requirement in a more easy and diagrammatic way to business.

In this blog we will discuss on how to sync the iFlow with ICO.

You have modified an existing ICO and want to update the corresponding iFlow object using NWDS.

Resolution:  We know that we can create new iFlow object from ICO using the following steps-

A. Create the ICO in integration directory and activate the object.

B. Open NWDS and generate the iFlow from the ICO as below –

and select the desired one-

But, once the iFlow is generated and ICO is updated in integration directory- the same will not be updated in the iFlow automatically.

Please follow the steps to sync both of them –

2. select the ICO which is updated and you want to re-generate the iFlow and move the ICO to a folder called configuration – 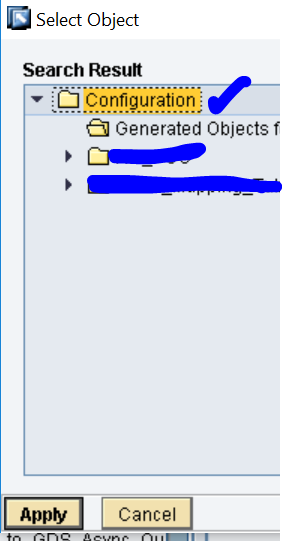 3.  This will move the object to a folder view as below –

4. Activate the ICO and open NWDS, after that follow the steps defined in A and B we will find the updated ICO is there.

5. Activate and deploy the iFlow and rename iFlow if required.

Using the above mentioned steps we can easily sync the iFlow and ICO. This option will help developers, if the ICO is updated separately first inside the integration directory and then the iFlow is required to be updated.

This option is very useful, when more complex XPath logic is used in receiver or interface determination. In that case, it is easy to define the XPaths in ICO and later the iFlow can be synced with ICO with the steps described in this blog.

Hope this will help the community!