This is another tutorial, part of the series of tutorials explaining the usage of
SAP Cloud Platform Backend service in detail.

In one of the previous tutorials we’ve learned to move the service definition into a separate section.
And which additional benefits this has.

In this tutorial we’ll focus again on this topic.
In the service definition section you can add select statements
This is quite powerful, I have to say
sounds good

Now, instead of projection, we’ll use a select statement.

Note:
You can use wildcard:

Example 2 : select statement with where clause

In this service definition, we expose an entity and a second entity, using projection and select statements

In both cases the data is fetched from the same table.
Moreover, the select statement allows to choose the desired columns
And on top of this, it is possible to specify a filter (where).
Like this, we’re able to do very fine-granular modelling.

This means that in this example, the returned collection is not the same for “Customers” and “CustomersUSA”
In case of “CustomersUSA”, there’s a filter applied directly on the database

Note:
Sometimes when using Backend service, I feel a bit unsatisfied, because I cannot see what’s actually happening under the hood. Like looking into the database. Reading logs, etc
Means, there are disadvantages at serverless computing
Do you feel the same?
I feel tired
OK, forget it

Example 3: one more example for select

See below a full example:

We have the normal collection of all customers.
In addition, we have a collection where we get only the customers located in our home country (in this case just as example, it is the USA)
A third collection gives an example of wildcard and fetching only entries with null value (e.g. for maintenance, or whatever use case)

Use the (generic) “Customers” collection to create several entries.
For instance:

Some entries with such property value:
“country” : “IND”

And some with no country at all, e.g.:

After creating some sample data, invoke the 2 collections, which have a select statement under the hood.
I’d like to see what’s under the hood…
I feel so tired…

But first to see the full payload, we use the (generic) “Customers” collection: 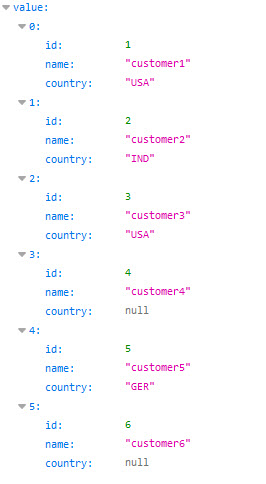 And finally the collection of invalid entries:

What we’ve seen here is that we have 3 entity sets operating on the same database table, and each entity set displays a different list of entries.

Yes, we explicitly list entries to always see one null property.
Why do I have to see the null if I’ve anyways specified it?
Yes, this can be enhanced.
We can exclude those properties which we don’t need to see.
How?
Just keep quiet and go ahead to the next example.

The alias works same way like we already know from the projection.
Also the excluding is not a  surprise.
And as you can see, complex filter statements are possible.
That is not complex
Would be possible

Just an example for another select statement

Short look how this kind of filter works.
Use the keyword “like” and a string with placeholder.
For example:

For testing, create some entries with the following payload:

When testing the entity sets, you’ll see that the “CustomersUnknown” contain only the first 2 entries.
The entries 3 and 4 don’t match the “like”-expression.

This example shows how the where clause can be shortened.
Also, it shows the difference between is not and !=

Example 8 : why use select statements?

Imagine you create a service and you want to have fine granular restrictions on the users who are allowed to use the service.
E.g., the ADMIN user is usually not allowed to invoke the services and view customer data

However, what you can do is:
Specify one entity which has a filtered view on the database, renamed properties, excluded sensitive properties
The data which can be viewed could be for instance the administrative data like “createdAt”, “lastModifiedAt”, and so on
Once you’ve created the API, you can create a Role based on APIAccess and configure it with this special entity, and assign this role to the user

No example here, only these FAQs:

Why do I need select/where ? I can do filter query in OData

Yes, a select statement with where clause in the CDS model is like a query with filter in the odata service.
We can achieve exactly the same effect, like the example above, if we use the below filter, instead of a where

Question not answered. Why should I do the select/where ?

In case of select/where in CDS, the filter is built directly into the database (almost).
As a consequence: only the required data is fetched from the database.

In case of $filter query with the OData service, the filter is done in the java layer (if java is used as language, better phrase it as framework layer). The generic implementation translates the OData filter statement into a CDS query
As a consequence: only the required data is sent via the network

In case of no select and no filter, the full data would be fetched from database and sent via the network to the web application, and the filtering would be done there, in the UI layer

Summarizing:
The first option (select) has the best performance, but of course it is a hard-coded filter and can only be applied to use cases which can be foreseen.
The second option ($filter) is fully flexible, with good performance, because no irrelevant data is sent via the network (important for mobile consumer-applications)
The third option is obviously discouraged.

In this tutorial, we’ve done a deep dive into the select statement.
This statement can be used in the service definition, to expose entities with restrictions on the exposed data.

Again an another great blog Carlos. I have some doubts here.

Why I've a doubt here is in ABAP, it won't work like that all the filters passed via the odata service will be parsed and a dynamic select statement will be created and the data will be filtered a the db level via the dynamic select query. So no performance difference(or a millisecnd level difference).

Now I believe it should be similar here as well or atleast it should be. but fetching the data to the java layer and filtering is kind of  overhead and instead in java also a dynamic select query(like in abap) can be parsed and still be filtered at the DB level right? Because i see this will be big disadvantage in case of big data access.

Or am I missing anything ?

This is a very good point and targeting low level implementation details.
You're right and that's what I wanted to say, but less detailed.

In the java layer itself, there are several sub-layers.
In case of OData-filters, the java layer receives the filter statement and translates it into a CDS-access-layer-conform call, which in turn would translate it into a kind of SQL query.

The fact that the generic service provisioning supports the filter at all, I assume is due to the fact that OData and CDS are brothers in mind, so it can be done generically (from filter to SQL).

The scenario which you mentioned, could be done in CAP, when overwriting the generic database access and replacing it with any other non-CDS-data source. Then you would need to fetch all data and filter manually in java custom code. Which of course would decrease performance. This would happen in an additional Java layer, the custom handler, etc

Bottom line, to answer your question, no, you aren't missing anything, you're just right and CAP (incl Backend service) behaves similar like in the ABAP

Thanks for the interesting contribution!

Thanks for the clarification Carlos RogganIt cleared my doubt 🙂