Filters in Web Intelligence can be used at Report level in order to restrict the data shown in the report.

While doing so, most of the time I had come across a trouble that while applying filter for certain columns, especially the places where we use the attribute of a measure, values in the report were found to be replaced with ‘#UNAVAILABLE’

As a BO Report Developer I come across this problem often.

For your convenience, I have explained it in the below screenshots:

I have created a report, where the Active and Inactive data are displayed. Check the last column in the below Screenshot, where both ‘Yes’ and ‘No’ values are displayed in the Active Column.

In the above report, I have highlighted the currency field for reference. It is an attribute of the Key figure, Total Target Value.

You can refer, that the last column consists of the values Yes and No.

Now, I have to show only the Active data to the user. In order to show that, I have to apply a filter, where the Active field consists of the value ‘Yes’ in the report.

Right Click on the field, where the filter is need to be applied and go to ‘Filter’ and then select ‘Add Filter’ as shown below. 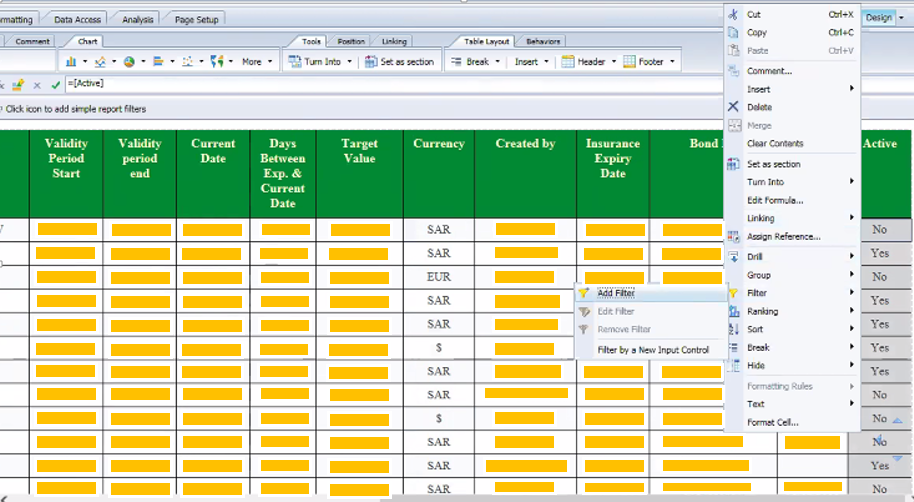 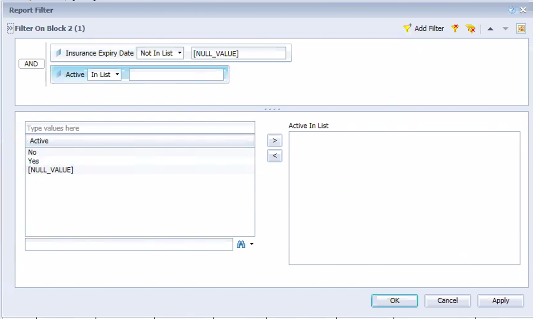 Select only ‘Yes’ and click the ‘>’ button. Now, click on ‘OK’ as shown in the below screen. 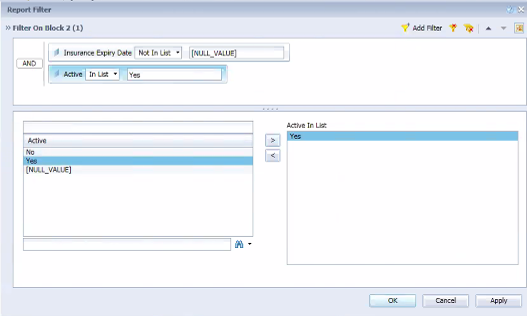 After applying the filters as shown above, the report screen appears like this.

Here, you can notice, that the Currency field values appear as ‘#UNAVAILABLE’.

This happens because the Currency field value in the report is taken from the Attribute of the Measure ‘Target Value’.

In order to avoid the ‘#UNAVAILABLE’ message in the report, I had checked in the query level, but everything was correct. So I had to follow the following procedure.

I have assigned the measure ‘Currency’ into a New Variable. This procedure is explained below:

Right click on Variables in the left pane and Create a New Variable.

The following Screen appears. Select the Attribute of the Measure, which needs to be shown in the report. Here, we are selecting the Currency Attribute, whose values were displayed as ‘#UNAVAILABLE’ in the report’. 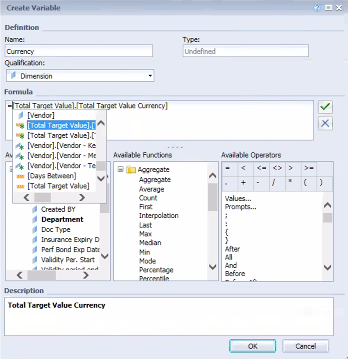 Drag the New variable named ‘Currency’ and drop it in the Currency field in the report.

The report screen appears as shown below. You can notice, that the ‘#UNAVAILABLE’ value disappears and the required data appears in that place.

Hence, the problem is solved!

I have written only about a specific condition, where the Measure attribute is displayed as ‘#UNAVAILABLE’ in the report. You can also try this solution for other conditions where ‘#UNAVAILABLE’ value appears and check if it works in those reports and post it.

Annoying problem, gracefully solved. Thanks for that !

You're welcome Lieven. I'm happy to know that this blog has helped you.