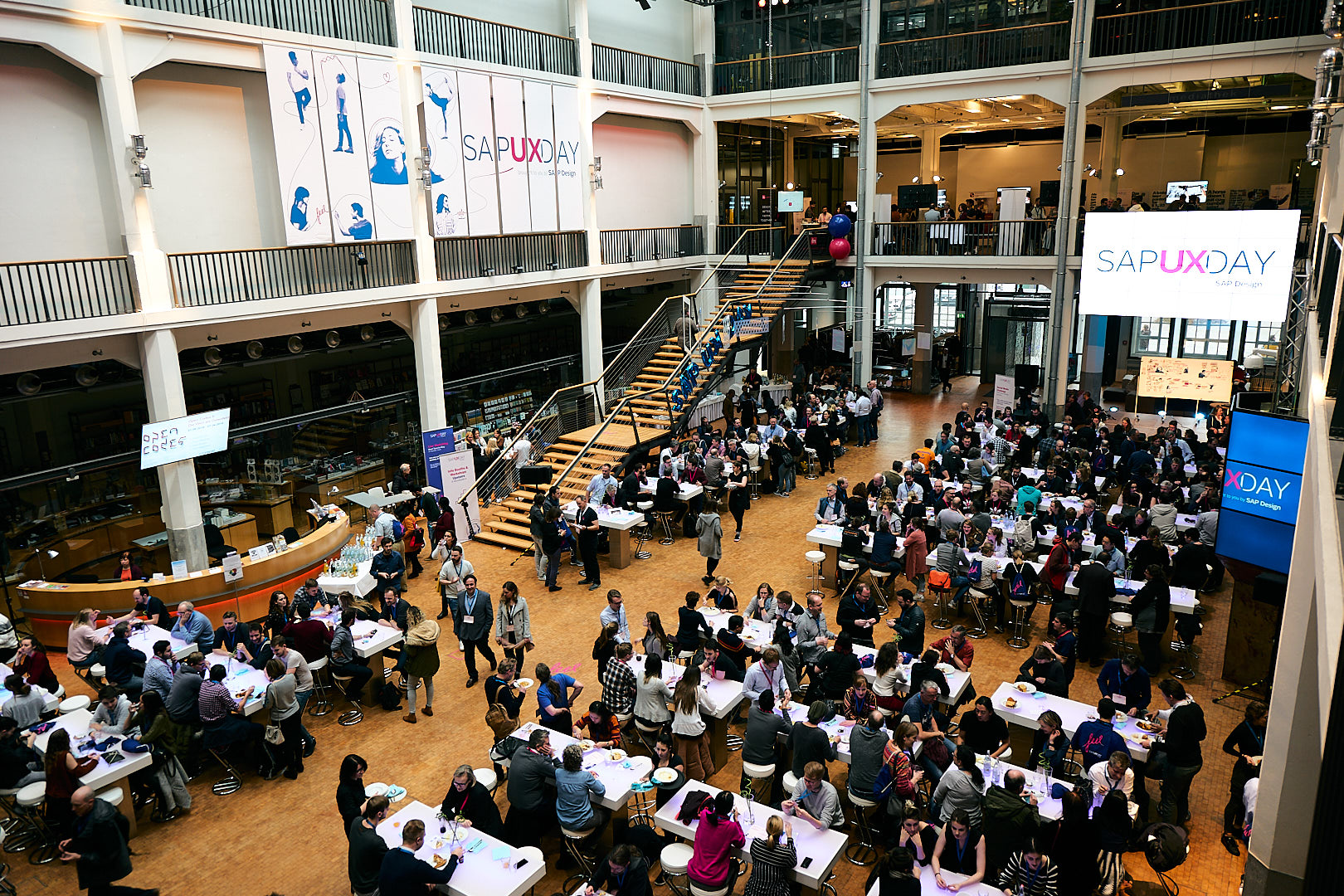 Over 600 attendees came together for the fifth SAP UX Day in Karlsruhe, Germany, to explore what it means to humanize technology
“Today’s event is all about people and how we interact with technology,” said Maricel Cabahug, SAP Chief Design Officer and sponsor of the event. In over 20 sessions, speakers from companies such as Pixar Animation Studios, Adobe Systems, InVision, University of Darmstadt, audity, and SAP discussed with SAP customers, partners, design agencies, students, and SAP employees what it means to leverage the newest technology to design a user experience that feels human in the age of artificial intelligence.

Maricel pointed out that designers have the responsibility to understand the continuously changing human needs and to design user experiences that cater to an individual’s skills and abilities. The traditional graphical user interface (GUI), she argued, is neither particularly intuitive nor natural. It is time we move beyond tables, charts, and text and look to artificial intelligence, natural language processing, virtual reality, and biosensors to develop richer user experiences better suited to human’s multisensorial and intellectual capabilities.

The human aspect of computer animation
The second keynote by Tanja Krampfert, Character Technical Director at Pixar, brought the theme of humanizing technology to the forefront with a discussion of what is needed to bring digital animations to life. Tanja presented her character work on world-renown Pixar movies like Inside Out (2015) and Coco (2017), discussing how the modelling of these animations is rooted in the real physical world.

Whether it was the grandmother in Coco or Anger in Inside Out, making these characters and their 3d skeletal structure relatable at a human level was key to achieving a realistic human experience, allowing audiences to form an emotional connection to the characters. One of the first things Tanja focuses on is bringing expression to their key essence – their head and most importantly their eyes convey key emotions like joy, sadness, or fear. Tanya’s keynote and her tangible examples perfectly outlines how much fun the work of a designer can be.

How will things work in the future?
What does an artificial intelligence future look like? Will humans and AI successfully coexist, with an equal voice? As Adobe’s Andre Jay Meissner advised his audience, it is the duty of a designer to actively help technology develop in the right direction. Since AI is not human, machines have no fundamental consciousness and cannot be expected to possess a moral compass. Machines are merely tools, and we must constantly question how much further we should push both their usage and abilities at every step in their evolution.

Similarly, at his talk on the rise of AI in design, Jan Korsanke, Senior Designer at the Scandinavian consultancy Futurice, pointed out that machines typically have no understanding of a bigger picture or larger context. Jan sees four key limitations of machine learning: imperfection, the underlying database, inability to achieve consciousness, and lack of innovation. While we as humans are attracted by perfection, imperfection, change, and evolution are quite human too. Since early evolution, humans had to innovate, stay curious, and use our creative instincts to solve complex problems. Tapping into new markets and opportunities may be daunting, yes, but it can be exciting, too, Jan emphasized. We need to think big, as humans we need to stretch ourselves to create both new methods and possibilities.

Crossing our fingers is not enough
In their talk about the future of design, Andrea Krajewski, Professor of Design at the University of Applied Sciences Darmstadt, and Kai Richter, Chief Designer at SAP Design, pointed out that designers should consider themselves the parents of the design systems they create. They need to take care of its development, sharing knowledge with related parties, and taking responsibility for its impact.

A key theme throughout the talks was that designers themselves need to get involved in the conversation. It’s not enough to create a design and introduce it into the world hoping for the best. It’s imperative that designers start thinking about the bigger picture and ask themselves important questions such as: What effects will our work have on humanity? How can digital ethics enable trust in business AI? What will future generations hold us responsible for? All of this is on us, and it’s up to us to react.