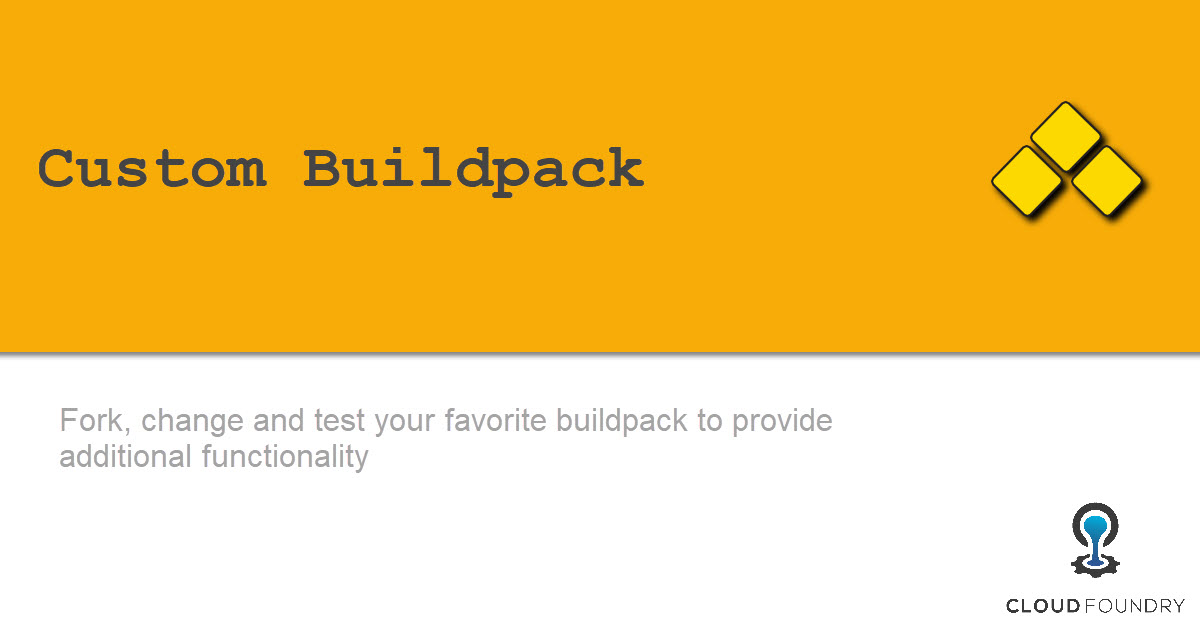 I’ll be going though the procedure for a Pyhton Buildpack (in reference to my blog on Python depending on NumPy ). That’s why you will be seen python as a prerequisite.

I have not tested this procedure for other buildpacks (such as Java) but I assume you can trace the same steps adapting the same files like I did.

Also, it is good to note that this is a completely different approach than the one described on buildpack.io – which is based on pack and build utilities on top of a docker image.

Talking about docker, I’d not recommend either docker nor WSL (Windows Subsystem for Linux) in case you intend on debugging go scripts. It sounds like a good idea but it will bring too much complexity to the table (in case you wanted to use docker). To add to this it is not even compatible with WSL (at least with the Windows build version I have). It might work on later Windows 10 build versions, but I couldn’t test it yet.

So, without further delay, let’s see what I’ve done to build this custom buildpack.

In order to proceed, here is my current setup:

After you’ve installed these tools you should have the following versions installed:

Add the following environment variables to your .bashrc or .profile in your home directory:

Install this library by issuing the following go commands via CMD:

NOTE: go is usually quiet (it doesn’t provide a lot of output during get or install).

To make sure the library is installed, runt the following [being at any path]:

Open the buildpack on github and press the fork button. Here I’ll be using the following URL:

After this you should have a new repository at your github account under the following location:

To clone the repository locally, adapt the following command to your forked git path:

This will create a directory named “python-buildpack” so you can create your own branch and start performing the changes from there.

Checking the buildpack runs all tests

But before we go any further, let’s check that the standard tests work with our current setup so far.

To run the unit tests we run the following command:

I am not a ‘go’ developer so I really feel there are better ways of achieving this. However, my goal here was to be able to provide a buildpack that was capable of running Python applications that depend on modules such as NumPy. Apparently, ‘pip install’ that runs by default will not do the trick. I believe this has something to do with the way the file “requirements.txt” is processed by the buildpack (I think it does this one-by-one so it prevents pip from installing them in the correct order).

Therefore, it will probably try to install a dependency from the requirements.txt before NumPy is already installed. Thus, it will throw an error and the deployment will fail.

Therefore, my modification is as simple as running pip to install NumPy, SciPY and MatplotLib before the buildpack tries to process the requirements.txt.

The Cloud Foundry Buildpack phase named “COMPILE” will call a go script named “supply”. This is where things Python runtime and its modules get installed.

I’ve created a method named InstallNumpy() inside the supply script, to do the trick:

And this method gets called right after InstallPipEnv method is called on the supply.go.

NOTE: Is this the best approach? Of course not!

A better way would be to let pip install command decide the order in which it should install all dependencies listed in the requirements.txt file – who knows. Instead I went for the quick and dirty method. If you are a better Python developer (and you are sure enough better then I am), I suggest you get in touch with the project maintainers and try to give them your contribution. I’d be glad to test your approach as well – so please let me know your thoughts and comments on this topic.

Synch git with these modifications

You may want to skip the above manual modifications by issuing the following git commands:

To debug the buildpack, we need a basic project to run against it.

I’ve prepared an example for my blog post on the subject, but this time I had to modify it to support the standard buildpack. I did this on another branch to avoid confusion.

Delve is a go debug daemon that will allow you to connect remotely from an IDE such as Visual-Code.

Let’s understand the scripts needed to start a debug session

We need to understand what happens during the COMPILE phase.

All of this is done by the compile script stored at the bin directory.

Let’s create a new script named “prepare.sh” based on the original [compile script] and replace the start command with a delve command that will start the debugger:

NOTE: Replace the Linux IP address in the script with your own IP address. Note also that I’ve included sanitation routines in the script to remove the directories created and included the switch [–accept-multiclient] to support debugging multiple times. This will allow you to both stop the debug session at any time and start from the beginning. If, you eventually finish the script execution and want to star all over, you should kill the dlv process and start the prepare.sh again to perform directory cleaning again.

Once you run the script, you should see a message like this:

NOTE: don’t try to use variables or ‘~’ to represent your home directory. Instead, always use the full path to the project directory as I’ve had issues running it correctly with the ‘~’ character.

For this blog I am using Windows and Visual Studio Code. Once you’ve installed vscode, make sure you have the go-extension installed:

Open the folder where the buildpack has been installed:

NOTE: After you’ve opened this folder for the first time on vscode, it will prompt you to install go dependencies locally – it would be a message at the bottom of the IDE (status bar). Let the IDE install all dependencies – it should take a while to complete.

Open the main.go script located on the following path:

Click on the debug icon (on the side-bar [left]) and select “Add Configuration…” from the drop-down menu.

This will add a file “.launch.json” at a new directory named “.vscode” at the root of the project.

Set a break-point on the file “/src/python/supply/cli/main.go”, click on the debug function in vscode to start the “Launch” configuration.

Observe the “Debug Console” view will show the same entries you will see the when the buildpack is running the go scripts while CF is deploying your application.

And your code will stop at the line with a line-break:

You will also be able to inspect local and global variables: 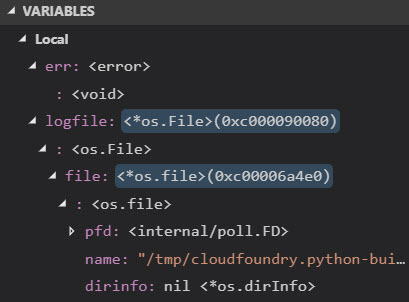 This buildpack was created under a *nix environment and it uses lots of stuff integrated with it. So if you want to run a debug session 100% local you need to adapt some things so it will allow you to run on Windows.

You will need to install go, git and delve locally. Follow the documentation mentioned on this blog. The sites will also feature installation procedures related to Windows environment.

Once you have everything installed locally, you should have:

Add the following configuration in your launch.json:

Add a task in vscode by going to the menu “Terminal” and sub-menu “Configure Tasks…”. Add a default task and change it according to the following:

Create another file under the scripts folder named “prepare.bat” with the following contents:

The launch configuration uses PIP_CERT environment variable and it needs to point to a local certificate file. In Windows environment we must download this file manually from this link.

Open the link from your browser and right click on the file entitled “Cert Autoridad Certificación Raíz: ACCV Raíz 1” and use the “Save as…” function. Save the file on your %HOMEPATH% with the name “ca-certificates.crt” or adapt the launch.json to make the environment variable PIP_CERT point it to the correct file name.

Once you start the debug configuration “Launch” you should see the terminal window open to run the batch file. Click on the debug console when the debugger stops at the line with a break-point:

And the debug session should go the same way:

Once you’ve added your changes via git to your forked repository, you can use it the same way as described on my blog Python with packages depending on Numpy.