February has been the month of Top Employer certification dinners, with events happening in locations around the world. The headline event for this month of celebration was held at Beurs van Berlage in Amsterdam, where Top Employer headquarters is located.

The Amsterdam event celebrates country winners who do not have a local event to attend as well as awards the regional accolades for Europe and the Middle East. For SAP, this is the night we were to receive the Global Top Employer award for the second year running.

You can read more about all the awards that SAP collected in a full breakdown here – 24 countries, four regions and one global award has made us very proud, so when I was asked if I would travel to the Amsterdam event I was thrilled to be given the honor.

The event itself was a glittery reception of delegates from around the world, all coming together as Top Employers. During the pre-dinner reception, individual representatives at our company collected the country awards. I had the pleasure of meeting SAP colleagues; Houda, who collected SAP Egypt’s award, Nadeen who collected Saudi Arabia’s, Neslihan who collected Turkey’s award, among other amazing talent. Also presented at this event was the award for the Czech Republic. This the first time the SAP Czech Republic have been certified as a Top Employer, and they were ranked number two!!

Huge congratulations to the team for the achievements!

After our group had collected the country awards, we were led into the main event. A huge ballroom filled with sparkling tables and branded signage. As the opening speaker took to the stage, you could not help but be swept up in the excitement in the room.

Companies from across Europe and the Middle East were called up on stage to collect their regional awards, with Christine from Germany collecting SAP’s award for Europe, and Houda, Managing Director of SAP Egypt, collecting the Middle East award.

Following these regional awards, and a rather tasty meal, it was time for the global awards. I walked on stage to collect SAP’s global award, and was then joined by Houda, Christine, Neshilan, and Clare, who works in the Dubai office. As I looked out from the stage, flanked by my female colleagues I swelled with pride that not only were we collecting such a prestigious award, but we were (from what I could see) the only all-female group! Talk about #WomenWhoRock!

So, thank you SAP, and everyone who played a part in every single one of the 29 Top Employer trophies we collected this year, you all make me proud! 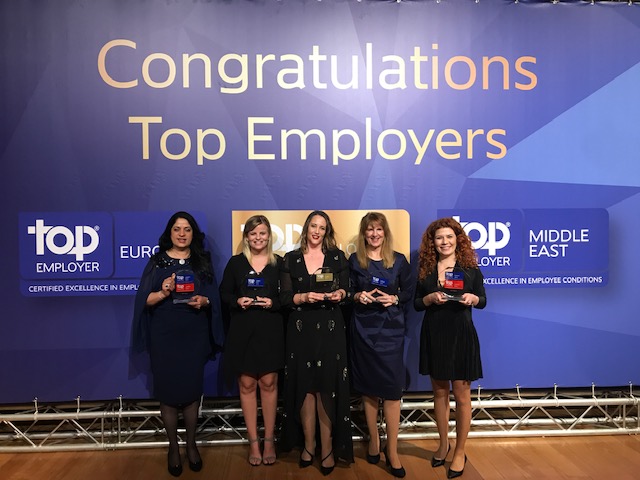