Using the Cloud SDK in an existing Spring app

There seems to be a lot of hype these days around the S/4 Cloud SDK / new Cloud Application Programming Model. I’ve briefly used it in the past, but decided that it is not mature enough to invest time into it.

As I am between projects right now, I decided to take another look over it. Most of the blogs here on SCN focus on how to build new applications (“side by side extensions”) using this SDK. Even though I have my disagreements with the approach proposed for creating new apps, I decided to look into another use case: adding stuff to existing applications.

This will be a terribly honest look into how my journey was and all the problems that I encountered.

As it happens, I have a small Spring Boot application lying around. Initially, I created it during a small workshop that I held internally at our company, but I re-purposed it to also explore the SDK.

The business context of the app is very simple: we want to help a teacher manage grades for his students. Basically, we have three phases during a university year:

An existing code base

During the aforementioned workshop, I implemented everything using typical Java + Spring constructs:

Before starting with the SDK, I did a small cleanup, upgraded to the latest version of Spring Boot and finally wrote a simple docker compose file for setting up a local PostgreSQL database (instead of using one installed directly on my machine).

Let’s imagine the following situation: we built our Spring app and delivered it to production. Some external applications are already using the REST API that we provided. Now our customer contacts us asking if he can integrate our app into his SAP ecosystem.

As we all know, SAP took a strategic decision to go for OData as a protocol some while ago, so after some analysis we decide to also provide an OData API for our app. It goes without saying that the existing consumers should not be impacted at all or as little as possible.

Because we are unsure exactly who will consume our APIs, we also think that providing both OData V2 and OData V4 would make sense (if possible).

Starting with the SDK

After reading a little around, I realized that I only need a small portion of the SDK, namely the service development part. I used Olingo a while back for creating V2 services and it was for sure not a pleasant development experience.

At a glance, it looked like I will just need to annotate some methods and that’s it. Well, after thinking about it a little, I then realized there must be some hooks or listeners to trigger the annotations scanning at the very least.

First I read and went through some blogs. Carlos Roggan created a nice blog series dedicated to the OData service development, so I started from there.

Initially, I dissected the V2 provider libraries, but I struggled a lot to get the correct dependencies inside my POM. So this is my first point of contention: there are a lot of dependencies and it is very difficult to navigate through them. In the BOM(s), many of them are listed, some with exclusions, basically forcing you to import the BOM even if you actually only need one single dependency.

I ended up including the following dependencies:

This seems to pull a lot of other stuff that I don’t want, but I don’t have a better alternative (without having to exclude manually transitive dependencies that I don’t care about): 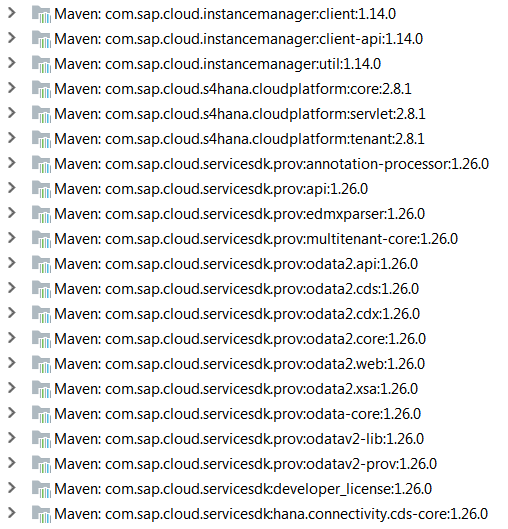 Then I added the V4 dependencies.

They are mostly symmetrical to the V2 dependencies, with two annoying differences:

Verdict: for sure it is a good thing that we can use Maven Central to pull the right dependencies. But the way in which the artifacts are organized is not clean in my view, having a lot of dependencies to each other and forcing developers to do trial-and-error rounds and include dependencies step by step until we don’t get ClassNotFoundExceptions anymore.

Ok, so the first step I did was to manually create metadata for all my operations. This was fairly easy, I basically just created three entities (Group, Student, Grade), a complex type (AverageGrade) and several function imports (GetAverageGrades, GetHomeWorkCheck) to match the REST operations.

I created two metadata files: one for V2 and one for V4. This was actually the first time I created a V4 metadata file by hand and I must say that it is a lot less verbose than its V2 counterpart.

The next step is to bootstrap the V2 API. I found out that in my dependencies, I have:

I initialized everything through a configuration:

I wrote some simple controllers annotated with the SAP OData annotations (@Query, @Read, etc), whose only job is to extract the data from the incoming requests, call the service and then map the result back to the OData objects.

This actually went pretty well, the annotations are pretty intuitive, although with slightly inconsistent naming (the @Function has a first-capital-letter Name property).

When running the app, I hit a problem: these annotated classes were being instantiated with newInstance, but I did not have a no-arg constructor (because of constructor-based dependency injection).

Luckily, the library uses the native ServiceLoader mechanism for creating an InstanceProvider. With some small hacks, I linked my own provider which uses the Spring Application Context for retrieving instances:

Due to the structure of the entities and the REST API, I wanted to be able to directly create a student inside a group by doing POST Groups(1)/Students. This seems to not be possible, so I had to create some specialized POJOs for the OData side (which also have the parent entity IDs inside the child entities):

Trivia: I found out that the SDK uses the Jackson’s convertValue method to transform POJOs into data maps. This means that if you put any @JsonProperty annotations on your fields, they will be renamed in the output (as long as the metadata also has this name in it). I also don’t know how I feel about the performance of this, considering that Jackson performs a serialization and then a de-serialization to do this mapping.

Verdict: This part went pretty smooth, and SAP actually used a well-known mechanism for allowing developers to connect to their framework, so I was pretty happy at this point.

The V4 configuration is very similar, with the difference that we don’t have an EndPointsList servlet:

After doing this configuration, sh*t started hitting the fan.

It looks like there is a so-called AnnotationRepository which stores all the annotated methods. Unfortunately, this singleton class keeps everything inside a map of lists. Both the V2 and the V4 perform the same annotation scanning, so these lists will contain exact duplicates. In some well intended logic there is a sanity check that throws an exception because of this situation.

Trivia: when I was digging through this to find a solution, I stumbled upon a magnificent piece of coding:

I then thought that maybe at some point I will want to do something slightly different in V4 than in V2, so I extracted some base classes for the OData controllers and created dedicated controllers for V2 and for V4.

Now I had a slightly different problem: both V2 and V4 context listeners use the same package init parameter to determine where to perform the scanning. I needed to be able to specify a different package for each listener.

To achieve this, I created a simple decorator for the listeners which spoofs the package parameter. This hack looks like so:

The next thing that I had to do was to give different names to the v2 and v4 services (by adjusting the metadata file names accordingly):

Lastly, the V4 seems to not use the ServiceLoader mechanism for creating controller instances as the V2 library, but instead directly does a newInstance call on the class.

After doing this final change, my OData services were up and running.

Verdict: During this phase, I wanted to throw my laptop out of the window. It looks like the V4 libraries are of noticeably worse quality than the V2 ones. There is also a clear lack of consistency between the two (as the V2 uses the ServiceLoader concept whilst the V4 does not).

Initially I added one more listener for the V2 service: the ServletListener. Based on the listener initialization order, I encountered several problems (and I decided to just dump it):

One positive side effect of this listener was that it adds support for XSLX. Initially, I manually added the configuration for getting this to work even without the listener:

But then I noticed that I keep seeing a random XLSX file in my project directory after making a call requesting $format=xlsx. After checking the source code I found another magnificent implementation:

So I decided to scrap support for this format.

I am sure that some stuff can be done better on my side, so I would appreciate some hints.

Nevertheless, I would suggest several actions for product owning team to improve the developer experience while using the SDK:

Frankly, as a software architect I reject the notion that I should be pushed by a framework to chose a particular structure, application server, lifecycle management, testing strategy, etc. for my solutions.

It is ok to provide recommendations, but when most of the information is about this end-to-end scenario when all the technical decisions you could take are dictated by the SDK, then they are no longer just recommendations. I have a slight sense of deja vu when thinking about the SDK and its on-premise ABAP cousin, who dictates pretty firmly how an application must be structured.