The Message Dashboard app in SAP S/4HANA Cloud (SAP S/4HC) is a very useful application for troubleshooting integrations.  However, the app can be a source of confusion for users because the error messages can be vague and troubleshooting can be difficult and/or frustrating.  This blog will explore one example in particular–an HTTP 500 error when SAP S/4HC is the source of an interface.  Often SAP S/4HC is blamed but HTTP 500 errors usually originate due to a server side problem (or malformed payload).

In this example, EDI is being used to send Purchase Orders outbound from SAPS/4HC to a SOAP endpoint on SAP Cloud Platform Integration (CPI) which is in turn generating a Microsoft Excel CSV file for a 3rd party system.

First, it is important to establish basic HTTP principles.  HTTP 500 errors are often server side errors and the client does not know the exact error, rather just the fact that something went wrong.  In HTTP 500 scenarios where SAP S/4HC is the source system, it is the “client” system and the non SAP S/4HC system is the “target”.  This means that usually a deailed message for the HTTP 500 error would be logged in the server side application.  In our example, we need to look at SAP CPI for further details as this is the endpoint that SAP S/4HC is calling for this interface.  This is the same behavior that you would experience while using a browser for an HTTP 500 error—but also means that the SAP S/4HC power user who is looking at the message dashboard has no idea what the error is other than the fact that there is an error as indicated by the HTTP 500 error.

Technical errors as shown in the Message Dashboard App.

HTTP 500 error message in the dashboard:

For some integrations, there will be a download button to view the submitted payload for the interface (in XML format).  Often, you wont know the source of the error just by looking at the payload so you will have to check the server error message.

Now, we go to target system for the interface, SAP CPI, and look at the error message for further detail.

Using the SAP CPI message monitor, we see that our integration has failed:

Exploring the iFlow logs in further detail, we find that it the message is due to a malformed URL, which turned out to be an OData property mapping problem with how some filters were implemented.

In this case, the solution was to add a missing apostrophe to the OData filter.

Hope this blog helps you in your SAP S/4HANA Cloud journey! 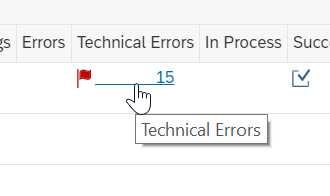 Thanks for sharing, really helpful.